The drive to Horseshoe bay was a blur, maybe because my mind was filed with visions of spectacular cave formations and rappelling into abysses, or maybe it was just an ungodly hour to be doing anything. We met the second car full of soon-to-be cavers on the 6:30 ferry to Nanaimo, excited to be on our way. Once on the Island our Modo van made a b-line north to Campbell River, only to spend an hour and a half at a Starbucks there; the exhaust system on Marcin’s car had come apart earlier and needed some emergency repairs in Nanaimo. Finally we were all together and ready. After another hour winding our way through cloudy logging roads we reached our camp site in the Memekay River Valley.

Jannú, Irma, Phil and Marcin already knew the caves we would be visiting this weekend. Several weeks before they had come here on the invitation of the Vancouver Island Cave Exploration Group to learn the secret locations of the caves and prove themselves worthy of this knowledge.

After setting up camp, we headed to the first series of caves we would visit – Scallop Cave. Coveralls were dry, faces clean and headlamps all worked; everyone was too neat and tidy, we needed to find a cave fast. A quick search through the forest and we found a spot where the cave roof had collapsed long ago, giving us access to two sections of the subterranean river. Headlamps were turned on, helmets tightened, and we headed into the darkness. 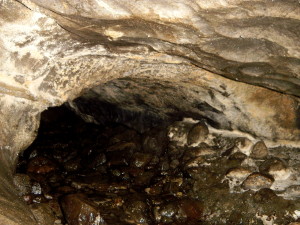 We followed winding passage downstream in single file, admiring the sporadic straws (thin, hollow stalactites) and various other formations. The entire length of this system was extensively scalloped, making it look like someone had been digging away at the rock with an ice cream scoop. We tried to respect the masses of spiders that covered the walls, deciding the only things they got to eat down there were lost cavers. 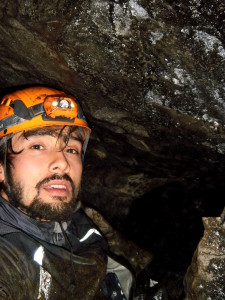 The first passage quickly ended in a sump. On the way back we took an interest in the various offshoots to the main cave, squeezing our way to a couple dead ends. We made it back to our start, and entered the upstream section of cave. Walking, crawling and wriggling and came out the other side to find night had fallen. But we weren’t done yet, there was another upstream section of cave yet to explore. After a short while the tunnel ended in another sump, with a small wooden ladder leading up to a too-small-to-pass hole. By this point we were all tired, wet, and our coveralls were equal shades of mud. It had been a successful day and was time to head back to camp for food, drink and dry clothes. 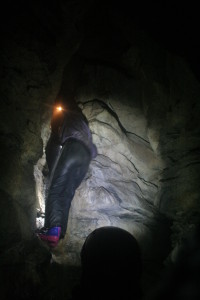 Adriana climbs into a side passage. Photo credit: Jannu Casonova. 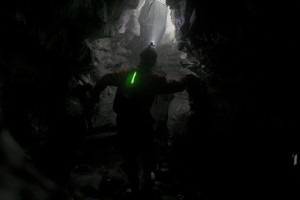 In the morning we headed for the Emilia Creek system. Although we drove there and got ready in good time, it took a bit of bushwhacking and searching to locate Emilia Creek Main.

Gearing up for the Emilia Creek system 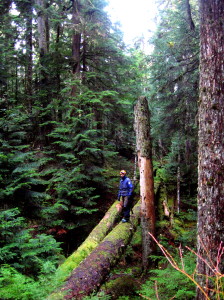 Caver in a tree.

When Phil and company had attempted this cave previously, they were quickly turned around by high water levels funneled down a narrow three or four meter waterfall. Luckily the rope they had put in place was still there, anchored to a hefty tree. With lower water than before, we did a test run to make sure we could descend and ascend this waterfall using the rope’s alpine butterfly handholds, backed up by a body belay from above. 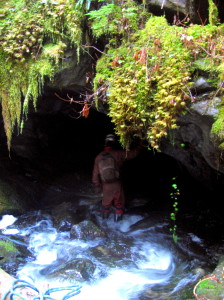 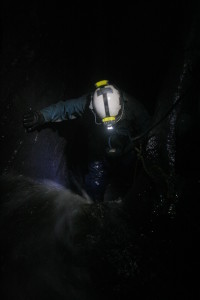 Irma is 2/3 my height and way more of a badass than I’ll ever be. Photo credit: Jannu Casanova

The test completed, Irma and Adriana opted to stay back and search out the two other Emilia Creek caves. The rest of us then down climbed the waterfall once more and continued deeper into the cave. We followed the raging stream for about an hour and getting thoroughly soaked. A word for the wise: use neoprene socks if you ever go caving. I still can’t feel the bottom of my left foot as a result of Emilia’s cold water. 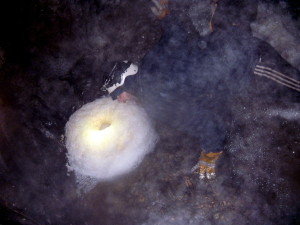 We were turned around by a drop that needed gear, and the way out was much quicker than the way in. I ran into some trouble when a small waterfall sucked my boots off before the roped section. The final waterfall and subsequent bushwhack back to the cars were pretty interesting without boots, but I was lucky to have no feeling in my feet. The rest of the crew, led by Irma and Adriana explored a smaller cave upstream (twice) but weren’t able to find the third Emilia Creek cave. They returned to the cars at dark, mostly cleaner than the day before. 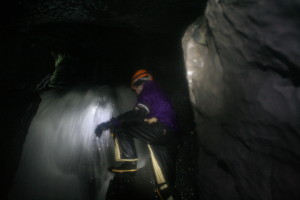 Frank on the way out. Photo credit: Jannu Casonova.

On Monday we split into two groups. One group, made up of Jannú, Marcin, Frank and I went to Rockfall, a cave which required vertical equipment. The other group with Ryan, Irma, Felix and Adriana went to explore Little TNA, a maze of tight, muddy passages. Phil opted to stay near camp and explore the area, refusing to go into Little TNA again (thankfully, as he let me use his boots.) Our group reached Rockfall as early as we could, and prepared our gear in the snow. It was difficult to convince my sleepy brain to keep putting on frozen layers, but the clink of climbing gear had turned me on and this was the cave I had been waiting for. 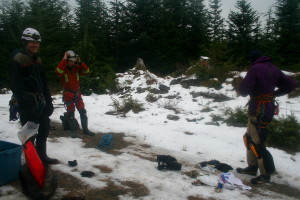 Rockfall began as a scramble over frozen boulders, but quickly turned into a tight crawl. Once on our feet again and it was time for our first descent. Rapeling through a waterfall is an awesome feeling. Once passed this, we entered a drier, muddy section of cave where the formations were amazing; we saw prickly ceilings with half meter straws, a meter and a half piece of cave bacon and floors covered in pearly flowstone. Apparently the people who showed Jannú and company this cave previously were unaware of this section, potentially making them the first to explore it several weeks before. My inner child had a great time crawling through the oozy mud here. We reached a second rappel that they had bolted when finding this section, and continued on. We came to a final passage, holding our heads between waist-deep water and a low ceiling. Jannú and the others had been unable to make it these last ten or twenty meters because of higher water last time. In a monumental addition to modern caving, we may have been the first to see these few meters of cave. We turned around and retraced our steps out. For the roped section we used the frog ascension technique. While ascending through the waterfall, I felt a boot come off. Uh-oh, not again…Luckily Jannú, at the bottom, was able to grab it before it got swept away. Another word for the wise: use boots that really, truly fit. We reached daylight and realized we were already a half hour late for our rendezvous time with the others. Frantically changing in the sleet, we started our drive back to find that Ryan, Irma and Phil had been coming to rescue us. Thanks for trying to save us!

From the pictures, it looks like the other group had a good time in the mud at Little TNA. 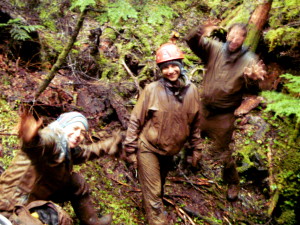 We got back to a half-disassembled camp and quickly got our stuff together. The Modo van left about ten minutes before Marcin’s car, and arrived in Nanaimo about ten minutes before; this is interesting, because apparently Marcin and crew got pretty lost on the logging roads. We waited out the 7 pm ferry over a few pints and some dinner at the pub, and were back in Vancouver before long.

The experience of wiggling through mud and climbing through waterfalls to see intricate formations, towering caverns and feel fifty meters of rock above my head was truly incredible. I think I speak for myself and everyone else when I say this was an awesome adventure. Thanks Jannú, for making this trip a reality!

One Response to Memekay Caving Trip