After a fairly sluggish early-morning stumble to the bus loop to meet up with the group, I was officially out on my first VOC trip. Originally, the plan was for half the group to hike Lynn Peak and the other to head out to Norvan Falls. But after, as Artem put it, “a visit from the VOC gods,” it was decided that Lynn Peak was way too miserable to attempt, and so the whole group headed out to hike to the Falls. 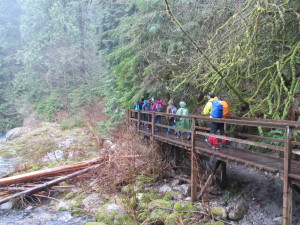 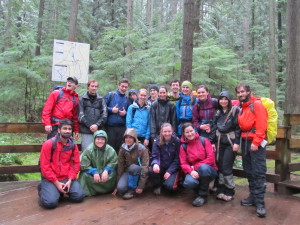 The (mostly dry) “before” picture

We left from the trailhead and ended up on a 1.5km detour, at the end of which everyone had already resigned themselves to the fact that they were going to be soaked. Hair dripping and raincoats already starting to soak through, we split into two groups to take on the upper and lower trails of the Lynn Loop. The lower group was promised a “more low-key, relaxed hike” while my group was told only that the upper trail contained mud, mud, and more mud. Not that that’s a bad thing – mud soaked all the way through your hiking boots is a pretty great initiation to the club. 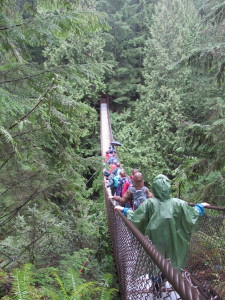 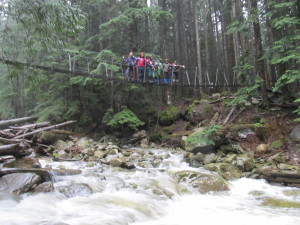 Fairly soon into our trek along the upper trail, our group took another detour out to the little bouldering field (which was an adventure in itself, since the path out to the field was essentially a bog). Most of the rocks were a little too soaked to climb, but one had a nice enough face and most of our group chose to test it out. 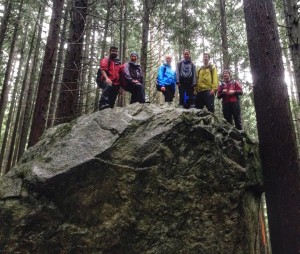 The rest of the upper trail was, admittedly, beautiful. Of course, the rain was still pouring away and we had to cross more than a few ankle-deep rushing streams, but the wet weather couldn’t detract from the great hike. We met up with the rest of the group right out at the falls, where we set up a few tarps and brought out our food for the planned picnic lunch. The falls themselves were beautiful, and it was a nice point to relax at after the hike in. 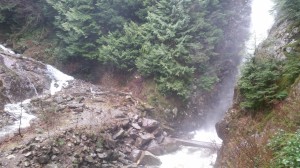 But I’m not going to lie: I was looking forward to the hike, but I had been excited for this food all week. And I wasn’t disappointed. The menu of the day included bakery bread, beer, pumpkin loaf, fresh fruit, chocolate, and about as many kinds of cheese as you can imagine. On a side note, I was definitely told by more than one person that my trip report should just be a recount of the food, and lets be honest, I could talk about the food on that trip for days. I mean, I live in first year residence – I’m pretty sure that’s the best I’ve eaten in at least a few weeks. 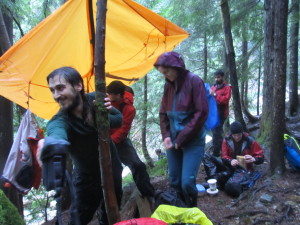 Setting up for lunch 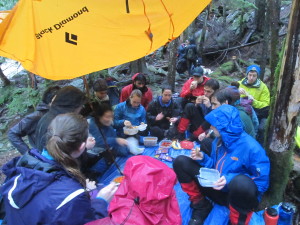 Lunch didn’t last too long though, since everyone was pretty much soaked through. Everyone put on what dry layers they had, I had to take a few minutes to try and warm up my hands (with the help of some hand warmers courtesy of our wonderful trip organizer), and pretty soon we were heading back. The general consensus was that no one wanted to go back on that upper trail after lunch and so we got to explore the lower part of the loop for the rest of our hike.

We did eventually make it back out to the trailhead and wasted no time getting on the bus, which we left smelling…beautiful…

18.5km of hiking, a lot of wet clothes, some amazing food, and one really awesome day – I’d say my first trip was a success. 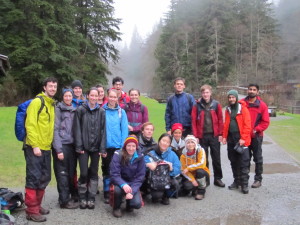 The (very soaked) “after” picture