Flora peak -a walk in the sunshine.

With the weekend a couple days away, forecast for Saturday turned from questionable to complete crap, eliminating plans of an overnight trip and an alternative plan was needed. Thankfully Sunday was forecasted to be sunny and warm, conducive to a proper hike of sorts. After the usual decision-faff, Marcin and I picked Flora peak as our objective since neither of us has been there before. At 1350m elevation gain, it seemed like a good all-around goal that was neither too quick nor offensively sloggy. Research came up with some conflicting results, often grossly contradicting logic (and topo maps), one calling for a 1800m elevation gain over first 4km, and another for a total gain of 1800m. Topo showed road at 600m, summit at 1950, and nothing suggested a major parasitic elevation yo-yo, so we went with it.

The weather on the drive to Chilliwack did not look encouraging at all, but got better and better as we approached Post Creek parking area. With the common break-in history of the place, I left the car unlocked and free of anything valuable.

After some moderate slog up the switchbacks, we got our first view of the Chilliwack lake and more peaks than I could count surrounding it 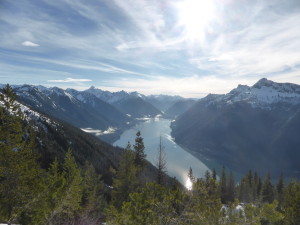 Shortly after we got within sight of the pass through which the summer trail goes down to Flora Lake and turned left, up the ridge to Flora peak. Snowshoes were mostly a good idea at this point… 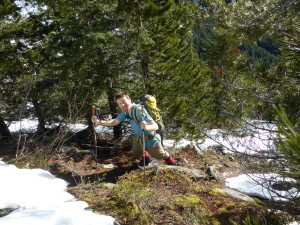 Shortly after, the snow  began to completely dominate the landscape. Avi conditions were not conducive to traversing large open sun-baked slopes, so we kept going up the ridge, hoping that the steep rocky looking bump on it won’t pose too much of an issue. We stopped on top of this section to have lunch and take in the breathtaking scenery that now surrounded us from all sides. 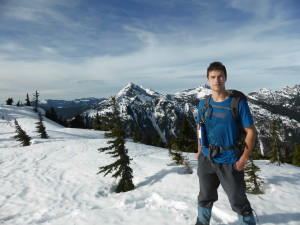 As we approached the steep rocky section of the ridge, we had two options, to go around it via the questionable slope to the right, or carefully approach it via the least exposed section through trees and scramble up the rocky section. This added a bit of adventure to what I expected to be purely a slog for a view. We chose the latter, and got lucky, as the rocks on the right side of the ridge bump were both less exposed and less chossy. 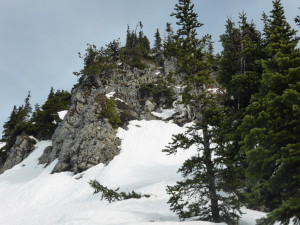 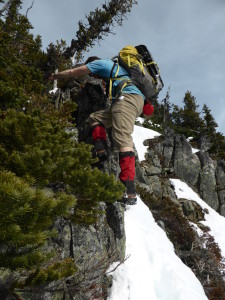 The short scramble went nicely, especially after the shrubbery stopped trying to eat the baskets of my trekking poles. Snowshoes went back on, and after a short hike we were up on what turned out to be false summit, and so we went down a bit and then up to summit proper. 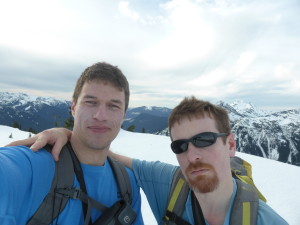 After a short break of taking in nutrition and views, we headed back down. 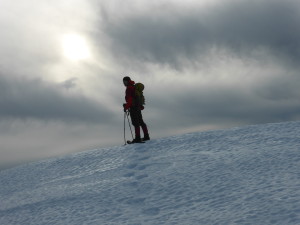 The way down was pretty straightforward, minus each of us at some point falling through the snow once in a while, sometimes up to the waist, snowshoes and all, and taking turns laughing at one another for it. And the one point where I briefly lost the trail, which we shortly after re-acquired. The descent went quickly, took us about 5 hours up and just under 3 down, including breaks.

Couldn’t ask for a better way to spend a day in January, which at times felt very June-like.