On a Thursday morning, Feb. 19th, a newly inducted VOC member Kelsey Miller (and myself) took off from Vancouver in her ol’ boat of a Chrysler.  We made the lovely morning drive along the Sea-to-Sky, and arrived at the Elfin/Diamond Head area parking lot after a few bumps and many missed potholes – thanks to Kelsey’s driving prowess! 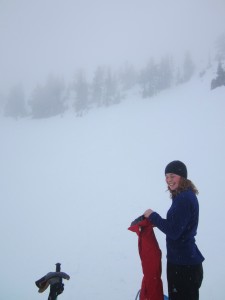 Whiteout conditions on the way up

We took off around 11 a.m., a late start to be sure… but considering the length of the hike, one we could get away with!  I had snowshoes strapped to my pack, but for the first 5km to the Red Heather hut they were never even needed. The snow started a ways up the trail, and was hard packed and nearly ice in many places.  Many people were on their way down from a Wednesday night stay, including quite a few from UBC.  We stopped along the path to play with the Whiskey Jacks, our first encounter with the tame and friendly birds. Our pace was leisurely, and we enjoyed the feeling of being out in the fresh, crisp air.

About five minutes after leaving the warming hut to continue our trek, snow started falling and the fog rolled in.  Winter quickly descended upon us! We had to change out of our fleeces and quickly into our water-proofs, to avoid being soaked. The snowshoes were never donned, however, as the trail remained hard-packed and the pace was definitely quicker without them.

The whiteout conditions lasted the whole way, until we finally reached the Elfin Hut around 2:30 p.m. We unpacked, got cozy, and began relaxing with some card games, snacks, and tea. Outside, a cold quiet had descended – broken only by the many hoots and hollers of about 25 teenage boys out digging winter caves in the drizzling snow. While we avoided the ruckus for a while, they did eventually come inside.  The atmosphere in the hut was instantly buzzing, the warmth of the propane fireplace dissipating throughout the wooden hut. 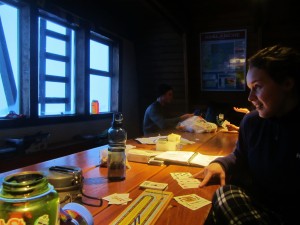 Relaxing with a round of crib

As evening fell, we chatted with new acquaintances and made our dinners.  The snow continued to fall softly outside, as said teenage boys prepared to spend the night in their snow shelters and we wasted the night away playing cribbage and Old Maid over hot drinks and homemade fudge.

Sometimes, a lazy trip to the mountains can be just as fulfilling as one where you send steep lines or bag difficult peaks. Just the act of getting yourself to a beautiful backcountry destination is rewarding, in and of itself. We enjoyed the ambiance and settled in for the night.

The next morning, we were awoken to the sound of the boys  clunking up and down the stairs, deflating air mattresses, shining headlamps, and generally causing a lot of noise.  We lazed in our bags until they had mostly cleared out, giving us space to breathe (and actually maneuver around the hut). Some of the fog had lifted, giving way to bluebird skies and breathtaking views.

Having met kindred souls from UBC the night before, and bonding over a riotous game of Cards Against Humanity, the four of us – Kelsey, Mo, Spencer and myself – ventured out into the morning sun for a bit of garbage-bag tobogganing.  Ah, the many uses of garbage bags – this one tops the list! 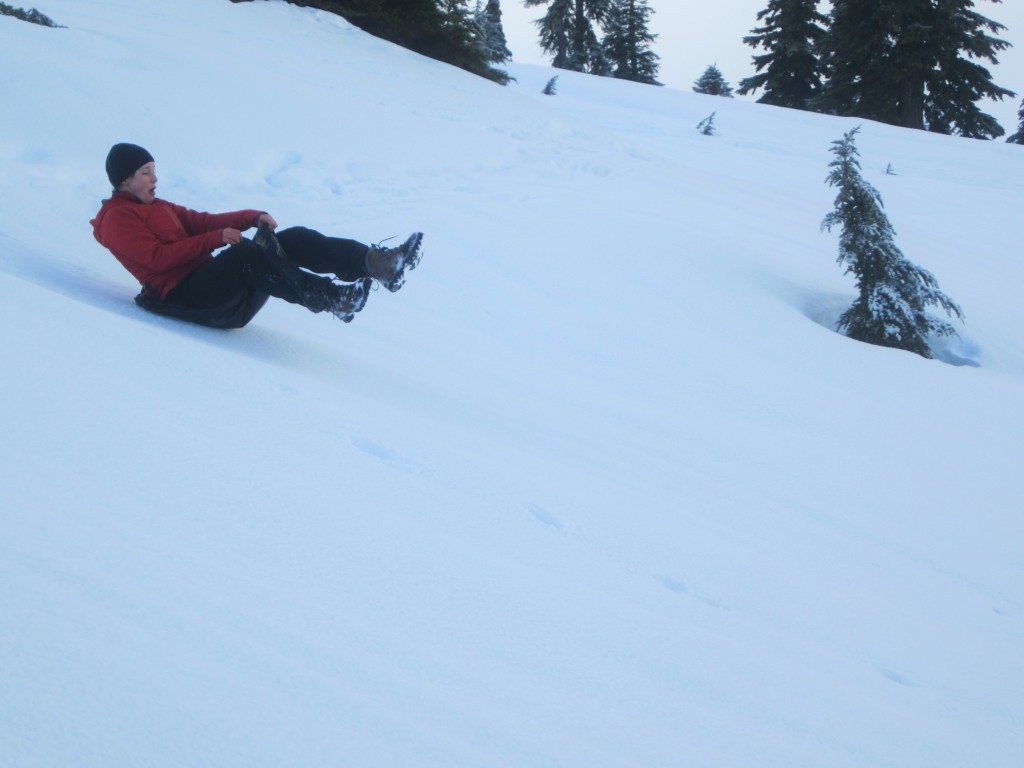 It came time to head back down to civilization, and before we knew it the fog had re-descended, bringing with it a flurry of fat snowflakes.  Our snow sliding fun over, we began the trek back.  At this point, the snowshoes went on for a few minutes… but they were simply too much of a drag, so I quickly abandoned them to the sides of my pack and took off after the others.  With conditions like these, it’s much faster and more pleasurable to walk in plain boots! 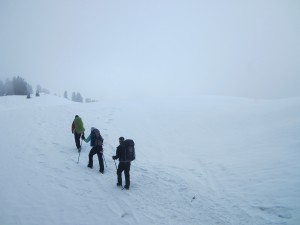 We trundled on through the quiet snow, the blankets of white making everything look pillowy and soft. We passed many hikers on their way up, including two rangers who requested our backcountry permits (which we provided with a smile) and then took off on their merry way.

The snowflakes were big enough to catch on your tongue, and we made good fun of trying to catch a few.  Pleasant conversation accompanied our short hike down the trail, the good-natured amiability of our two fellow outdoor enthusiasts adding to our new group of four.

After an unexpectedly short 2.5hrs, we had returned to the parking lot with still half of the day to spare. The weather had changed dramatically, as near the trailhead the sun was out and shining.  We reveled in the glorious 24 or so hours we had spent in a magical snow-covered mountain paradise, before saying goodbyes and parting ways.

This was our first trip up to Elfin Lakes, but it certainly won’t be our last! Many thanks to the backcountry gods for a safe and happy overnighter.