A zum (also called a zoa) is the female offspring of a nak (female yak) and a bull (male cow). Zum Peak is a forested summit located almost in the middle of the otherwise very impressive polished granite peaks of the Llamoid Group in the Coquihalla Summit recreation area. I’ve never heard of anyone climbing it, and now I know why.

The trip idea was to do a traverse of the lesser-climbed peaks in the Llamoid Group, in traditional Veenstra Traverse style (fast and light, with a large group) – we’d start from the Coldwater Creek logging road, bushwack up towards Zupjok, then traverse around the ridge bagging Lama, Alpaca, Bighorn, Vicuna and Guanaco before heading down a trail back to the road. Since there seemed to be some concern that the trip was too easy, I tagged a short extension onto the beginning of the trip which would climb Zum Peak. It wasn’t nearly as impressive a peak as the rest, but it would complete the horseshoe around the headwaters of Coldwater Creek.

Part of the Veenstra Traverse style is to leave lots of vital equipment – like rain jackets, tents, puffy jackets, and long-underwear – at home. As they say “fast and light, cold at night”. A key aspect of this strategy is to cancel/postpone the trip if the weather forecast isn’t good… however, since this year’s traverse was a horseshoe (leaving some possibility of bailing out and not completing the traverse) I didn’t cancel when the forecast (the usually-reliable yr.no, in case you are wondering) gave a marginal forecast of clouds and 0.6 mm of rain on Sunday morning. The skies opened up and poured rain on us as we drove up the highway, yet somehow (perhaps tempted by a short sucker-hole) stoke at the trailhead seemed through the roof and we decided to do the Zum Peak extension and carry on with the trip. Piotr stated “when else would we ever bother to climb such a mountain”.

The plan was to bushwack a little more than a kilometer up a wide gulley to the col between Zum Peak and the rest of the ridge. Instructions were given not to travel alone and to stick to the left, non-cliffy, side of the drainage and to gather up again on the ridge/summit. I heard battle cries as we charged enthusiastically into the soaking wet bush.

Charging into the bush.

Participants spread out as the differences in bushwacking speed and route selection became apparent. About 20 minutes and 500 meters in I stopped to count people as they passed by. The self-proclaimed rear of the group took a further 20 minutes to appear and I counted 24 bodies – 3 short of the 27 participants I was looking for – but I heard tell of another group further to the left that I probably missed and took off for the ridge. Chatting with a few groups as I progressed up I met some of the faster folks on the ridge about 1.5 from the start… the stragglers should arrive in another hour or so. But a real problem became apparent – looking at google satellite I’d somehow convinced myself that the ridge was quasi-alpine, and that we’d be able to see each other on it. But, in reality, it was thickly forested and the visibility through the fog was only about 50m anyway. Dave, who turned out to be at least as fast as me, and I ran down to the col and hollered as loud as we could all the way back up. We didn’t find anybody new. Close to the summit about a dozen of us gathered together in the cold, wind, and rain and began worrying about the rest of the party. Our metabolisms slowing down, and many of us lacking warm/dry clothes, we became cold fast. I put on my primaloft jacket (basically all my warm clothes), but still accidentally bit my tongue because I was shivering so much while trying to talk. We set up a tent and started to discuss plans for how we might gather the group together again. Fortunately, while we discussed it, the rest of the group (minus Roland and Carla, who were only planning to join us for the day anyway and informed Meghan of their bailing) appeared. What a relief.

There was some talk of bailing, but with plenty of day left everybody seemed keen to continue along the ridge. And what a ridge. Heavy bush early on made for very slow, wet travel. It didn’t rain constantly… but the wet bush, plentiful drizzle, and gusting wind kept us cold and wet. We tried to stay on the leeward side of the ridge, when there were options.

Finally, somewhere near the “intersection” where we could turn off for Zopkios (but instead carried on towards Zupjok), the ridge began to take on a more alpine flavour. However, giant intervening trenches ensured that travel was still agonizingly slow. Every time we hit one some from the group would spread out and try to find the easiest way (or any way) down and back up, while the rest huddled together for warmth. Cliffs on either side of the ridge kept us contained.

Giant intervening trenches made for slow travel along the ridge.

Finally, almost but not quite at the next ridge-intersection, we backtracked to one of the only 2 good camping spot we’d seen all day. The last thing I wanted to do was try to find camping spots for 25 people on the side of a cliff in the dark. Spirits lifted as we cooked dinner and verified that not only had we packed in sufficient water, but that (with a few people in vestibules) everybody indeed had a spot to sleep out of the rain and wind. I wandered around and ate dinner from within my plastic “sleeping bag”. It was great for dinner time, and worked about as well as one might expected for sleeping… 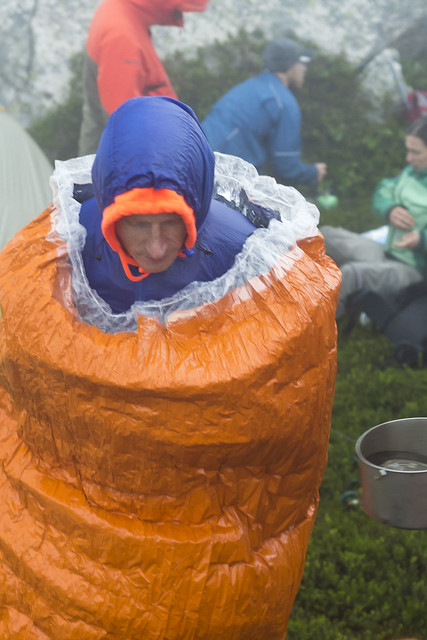 The next morning, our chances of finishing the traverse as planned clearly shot, we “slept in” and left camp around 8:30am to asses our bailout options. The first attempt was to get to the col East of Zupjok. From here we could bushwack back to the cars, taking the valley that would have started the trip had we not done this “little extension”. I thought it was a sure-deal, given that I’d read Robin Tivy’s TR on bivouac, and he had managed to make it this way. Not only that, but the Baldwin Map of the area had a marked ski line that crossed over the ridge and went around behind it… However, after an hour of 25 people searching around the sub-summit for the way down to the col, we resolved to turn around and go back the way we came. Maybe we would have succeeded with more than 20m of visibility. We passed back through our camp location at 10:30am, two hours after leaving it.

But there was one more bailout option faster than retracing our steps – if we could get from one of those trenches in the ridge into the bowl below to the North we might be able to pass by the next level of steep terrain and into the valley beyond. The last trench on the ridge did open up into the bowl, and we could skirt heather benches along the sides of the slippery looking polished slab down towards treeline. We were apprehensive of further cliffs bands on the descent, with some debate of our probability of success…

Heading to salvation or despair?

As we approached the next round of steep terrain people spread out looking for “the way”… and Sam found it – an unlikely tentacle of continuous thick bush that led us down through the slimy cliff bands. It seemed almost certain that we wouldn’t need to endure the horrors of everybody trying to climb back up it, but Sam took off for the valley floor while everybody else trickled through the bottleneck… just to be sure…

Crux of the escape.

Thankfully it did go, all the way to the valley floor. Looking back up it didn’t seem like there were many options, although we could see where that the ski line on the map crossed over the ridge – just beyond the sub-summit of despair along a final huge trench that we failed to be able to downclimb. With no further indication of steep terrain ahead of us we thrashed down the valley, often in the small stream, back to the logging road and the cars. Upon reaching the cars at 2:30pm the skies opened up slightly and the sun came out, inviting the mosquitos to feast while we faffed with our gear.

Good views of the traverse that wasn’t, now that we’re back at the car.

Just before hitting the highway many on the trip decided to go for a swim in the Coquihalla Lakes. It was knee-deep muck interspersed with pointy sticks and fishing line… a fitting end to the trip, really.

Somehow, despite the trip basically being a disaster, spirits were astonishingly high the whole time. Thanks to everybody for coming out and being patient with me, each other, and the mountains in general. I had a great time too. For those who are available, there is the opportunity to try again next weekend. We will stay the hell away from Zum Peak.

More photos from me.

3 Responses to The Zum Peak Fiasco