Posted on September 27, 2015 by Jessica Desforges

On September 26th 2015, a group of 20 people or so headed out for what turned out to be an amazing trip to Elfin Lakes. We departed between 9-10 am in a drizzling and unpredicted rain. Everyone seemed to have been somewhat prepared as they have dry bags for their packs, raincoats and rain pants, so no one got discouraged off the bat. We began our hike on a gravel/dirt road that led up to a more narrow trail. There was lots of fog on the way up, and we didn’t get to enjoy the view as much as we could have. The hike was 11km of uphill road-like terrain with a few occasional loose rocks. Nothing very intense, but it was a great beginner friendly hike for people who have never really been hiking (the vast majority of our group).

Within the first hour, I had the chance to meet amazing genuine people from all sorts of backgrounds, some on exchange from England, others from Scotland, the Netherlands, USA, China, Italy, and Sweden. Our group had different levels of experience therefore everyone got to hike up at their own pace, which was great.

After the first half hour, it stopped raining. We reached our campsite within about 2.5-3h, then we had lunch and started unpacking our things and setting up some tents. There was even one guy who decided to make a BBQ out of a tuna can which apparently turned out to be pretty legitimate. After lunch, most of the group was up for a 6.5km day hike called the Opal Cone. The trail was very different from the one we initially came up from, it was more natural and slightly more challenging, but it was also very well maintained and well marked. There was this really cool stream which we crossed on a very narrow metal bridge. About half way into the hike, many of us got tired and cold. We really experienced every type of weather during this weekend, drizzling rain, pouring rain, hail, clouds and eventually sunshine. We all ended up pushing through and hiking to the view point at a summit. With the fog rolling in, it was rather hard to get a clear view of our surroundings but every glimpse was worth the hike. As this is a popular area, we also encountered several other groups. One group of guys actually decided to strip off all clothing and take a butt-naked pictures in front of the beautiful scenery, that was pretty funny.

The hike back was a little harder for me because my legs apparently aren’t used to all this exercise, but it was definitely do-able. When we got back to the campsite, we shook the water off out tents, thankfully everyone’s was waterproof, and then we eat our dinner. We tried popping a Jiffy Pop but it didn’t turn out so well. If I had to pop a Jiffy Pop again at a campsite, I would probably shake it more and put it over a lower flame. But they do say “Life is a learning process”.  It also started to get pretty cold after 7pm, so we all decided to go to the heated hut. It was great to feel nice and toasty before spending the night in a tent. It got pretty cold at night and I would definitely recommend people to BE PREPARED FOR COLD WEATHER. If I had to do this trip again, I would definitely invest in a better sleeping bag, like a below zero sleeping bag, and also some nice thermals.

The next morning,  the sun was out, and we could not have asked for better weather. A bunch of people decided to go on a hike to the summit of a mountain not too far away from camp. It was apparently pretty vertical and demanding, but the fog really cleared up compared to the night before and turns out that morning hike was very rewarding. Although for some, a few extra hours of sleep proved to also be pretty rewarding.

When everyone got back, we ate breakfast and starting packing our things. Lianne, Byron, John and a few other people decided to jump in the lake for a quick swim, which is crazy in my opinion considering the water is absolutely freezing. Although it wasn’t for me, they really seemed to have enjoyed it and found it quite refreshing. The hike down was far more downhill than uphill so it was a great way to end the trip. We also had the chance to enjoy the views of mountains that we hadn’t seen on the way up.

All in all, this was a quite enjoyable weekend and I recommend it to anyone who has a taste for hiking and for the outdoors. You will be rewarded with exceptional views and you will learn new camping and hiking skills. Great way to spend a weekend! 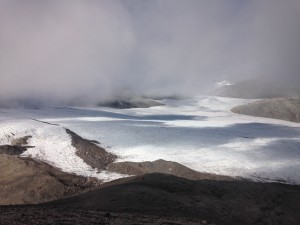 The drinking water lake along with the beautiful mountain scenery 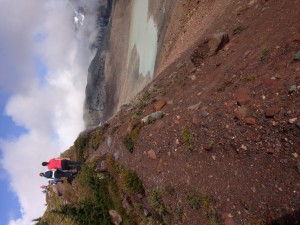