Posted on December 7, 2015 by Vincent Chan-Ying

And dang it was good. But I’m getting ahead of myself here.

I’d like to blame the malodorous midterms and asinine assignments for the delay in writing this trip report.

As always, I enjoy the scenic drive along the Sea to Sky highway—even if it was a bit dark. Eventually rays of sunshine greeted us through the trees as we approached the Diamond Head parking lot. We were the first to arrive so some of us just danced and hopped around until everyone had arrived.

Departing at 9:20am, we blazed up the path. I was determined to make serious elevation gain as I knew what reward awaited. 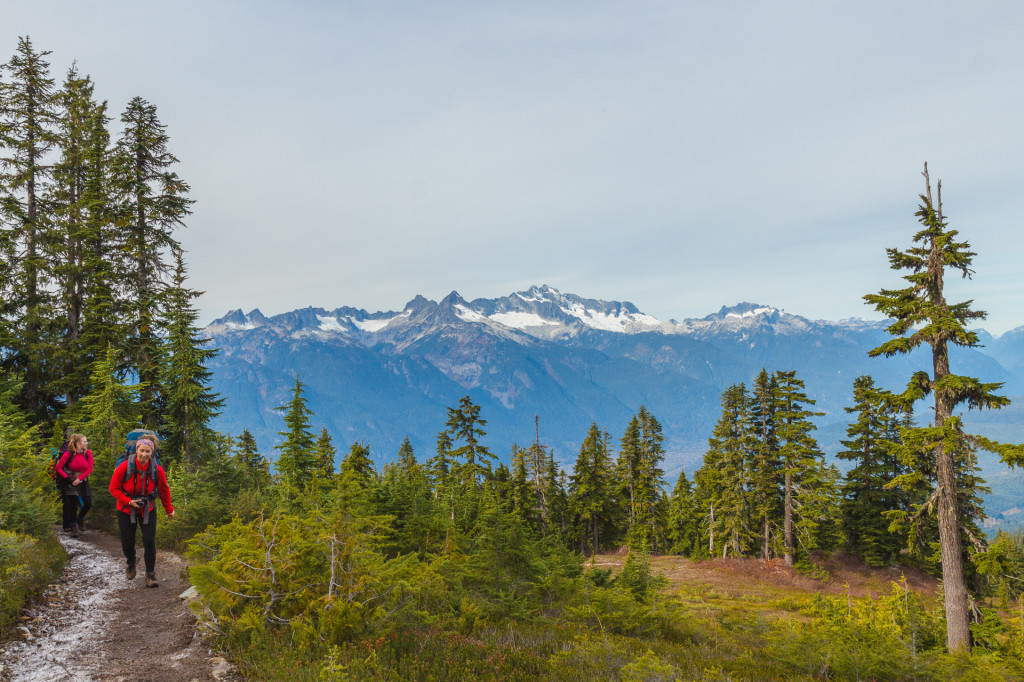 Emerging from the trees 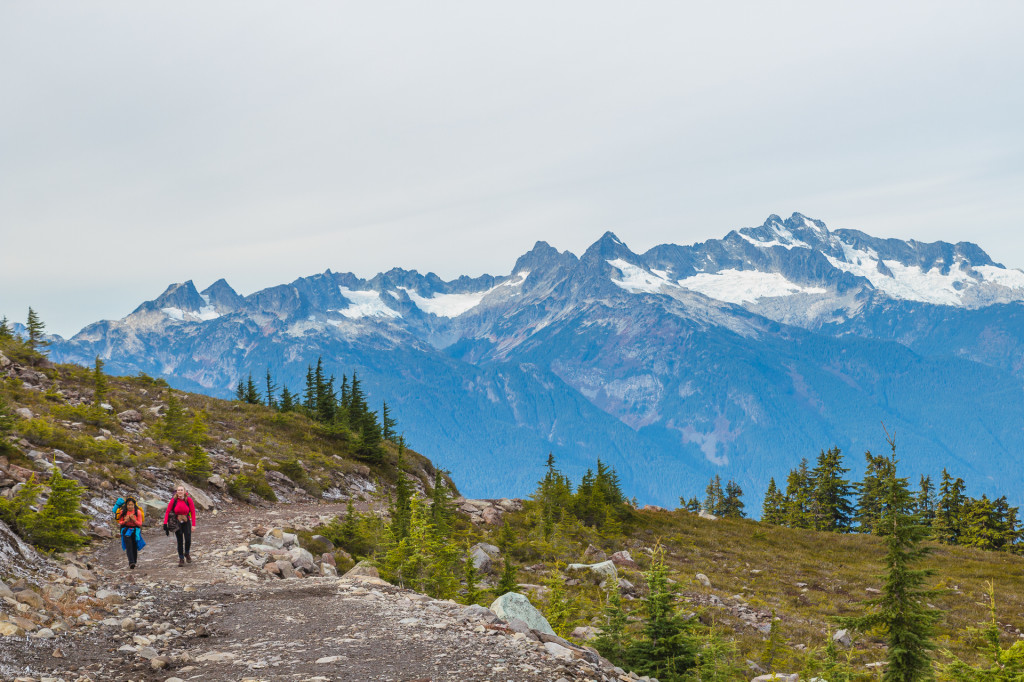 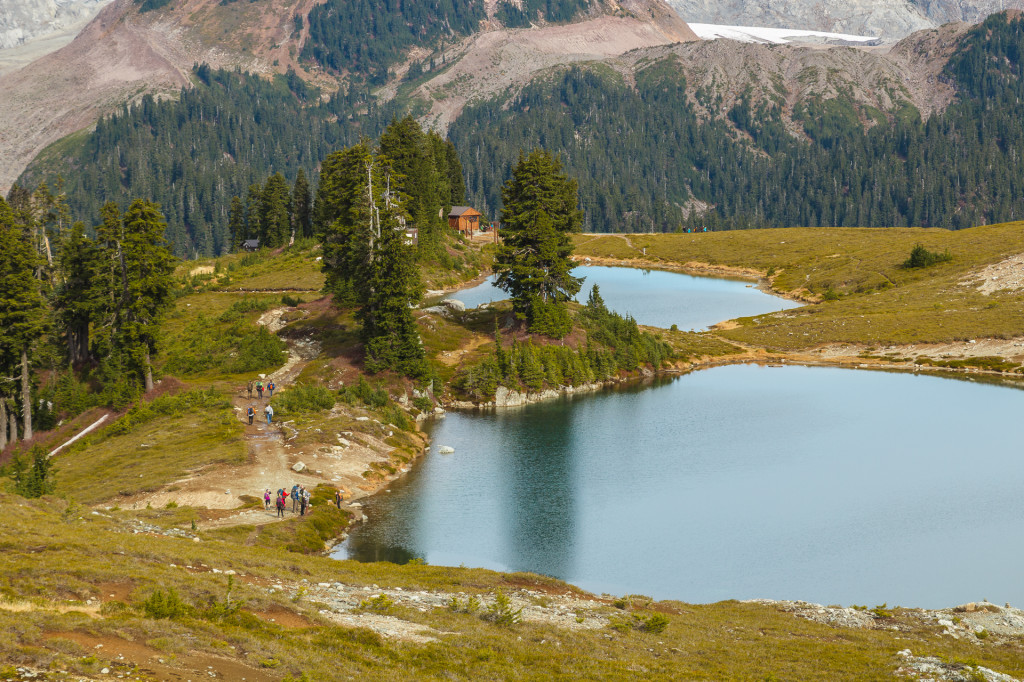 You can see most of our crew waiting by the lake

About half of us stayed in the hut. The other half of us had to set up our shelters. I actually enjoyed the challenge of setting up my pyramid tarp on a platform (sorry, didn’t take pics of it!).

After quickly refueling ourselves with some much needed calories, we departed at around 1:25pm for Opal Cone.

The trail was straightforward and scenic. I’ll let the photos and captions paint just how beautiful it is: 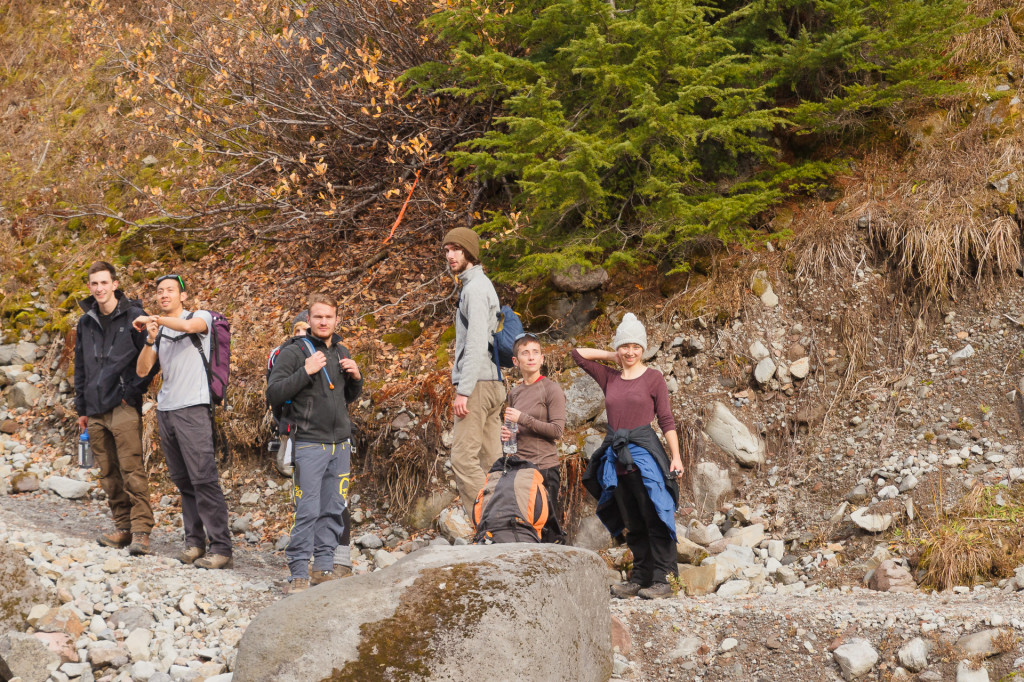 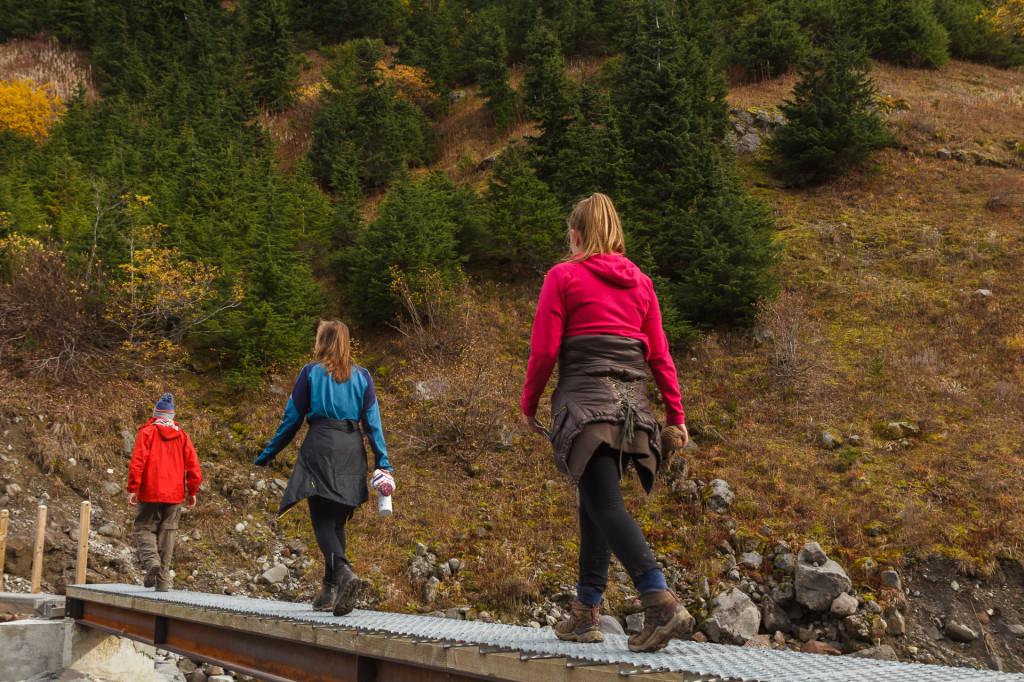 Crossing the Bridge over the noisy stream 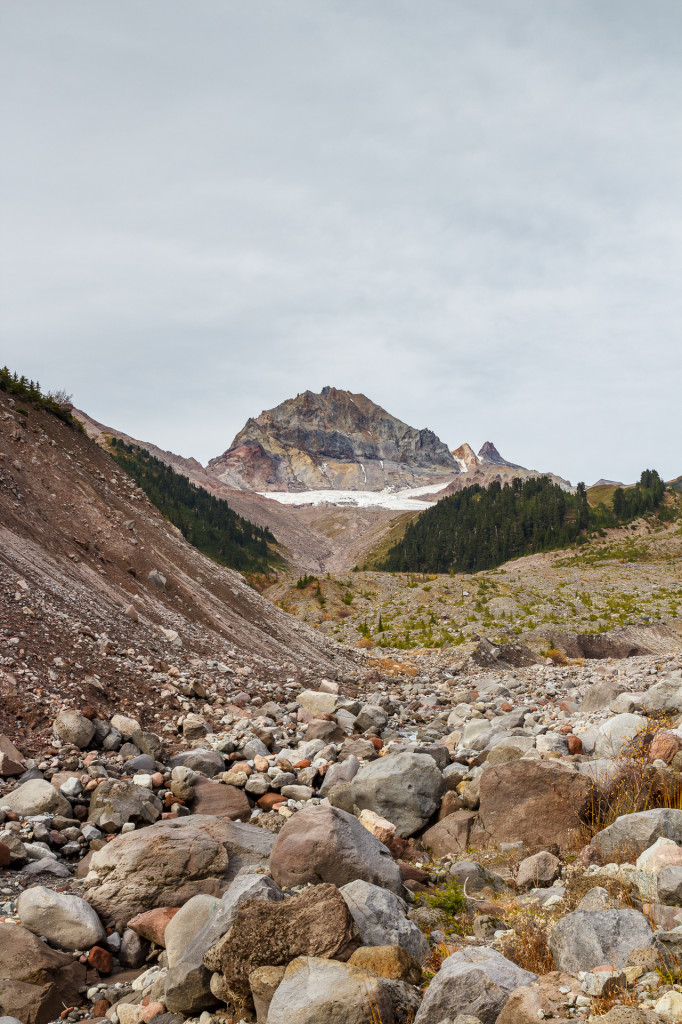 Little Diamond Head – Do you see what I see? I spy with my little eye 5 mountaineers 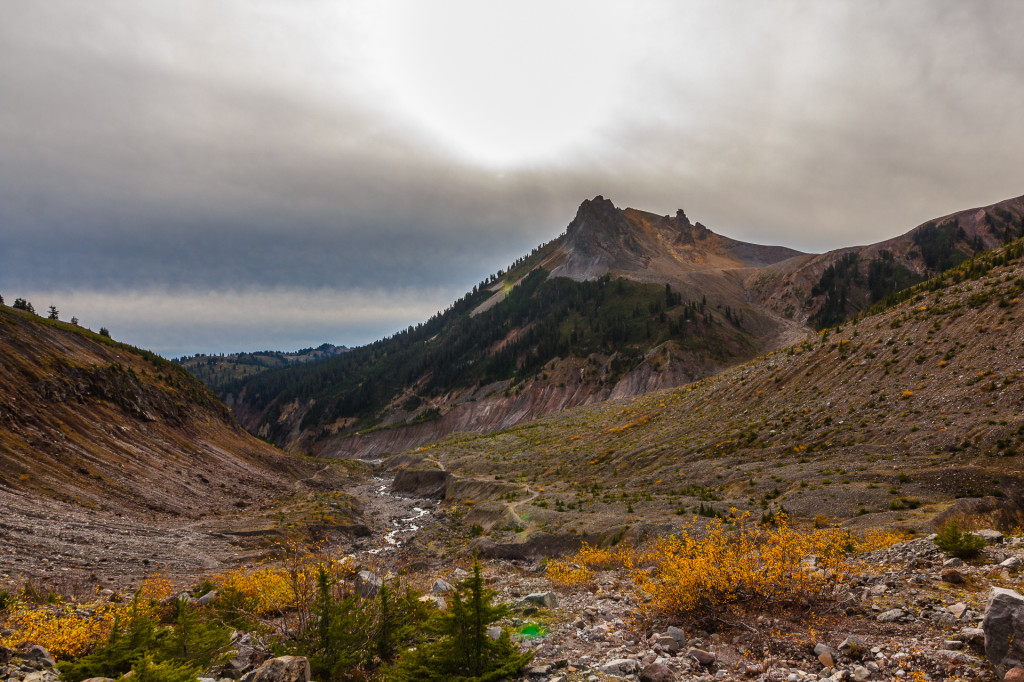 Looking back towards The Gargoyles Having looked at some topo maps, I thought that there was no established trail at a certain point and that we had to trail blaze from the base of the cone to the top. But lo and behold, we were blessed to not have to bushwhack. Can never get tired of this view Looking east at some pond that precludes Mamquam Lake 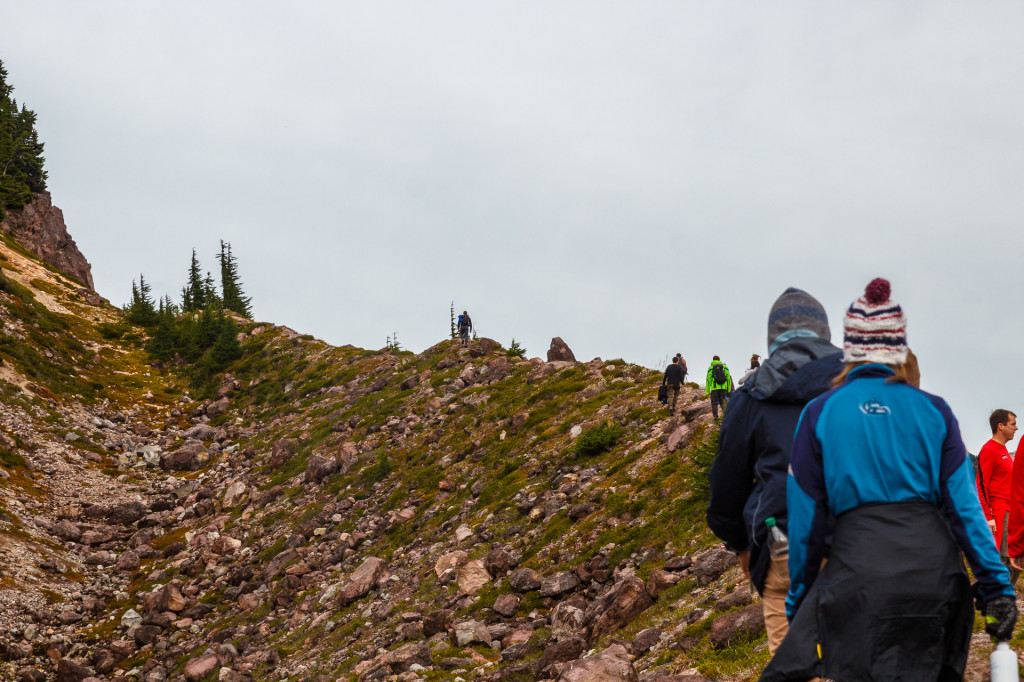 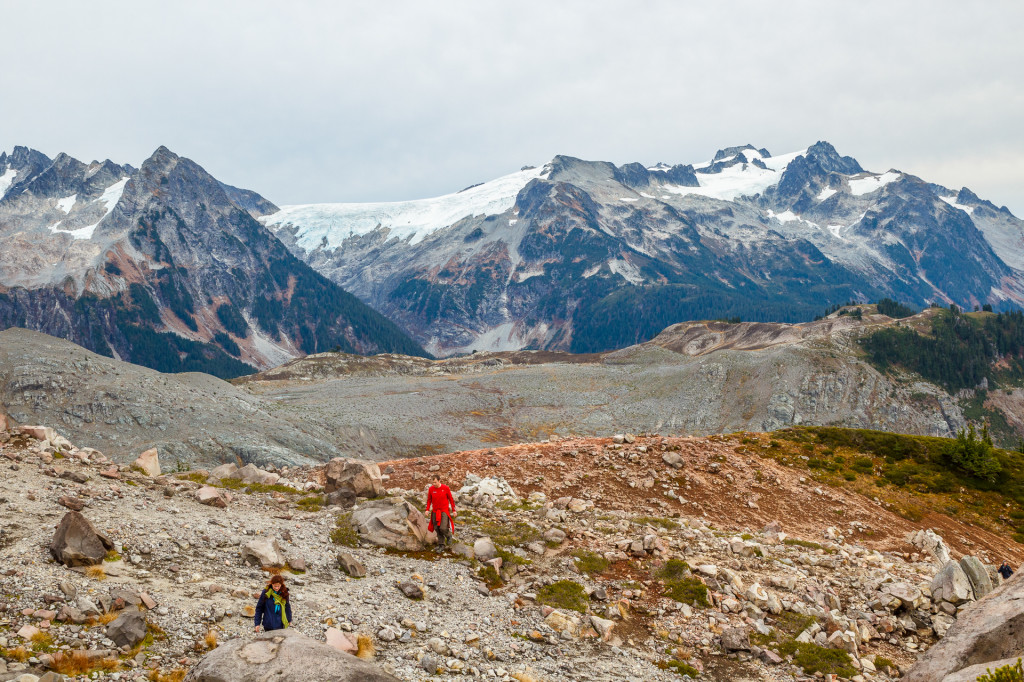 For the record, that’s not an ice cave in the middle All of us in a group shot! The Floating Camera Strikes again ;) We posed and stuff

We reached the summit at about 4pm and snapped probably a billion photos. We left at around 4:20pm and arrived back at camp at around 6:20pm.

For dinner, I tried to brave the cold outside but conceded defeat and migrated to the heated hut to cook my massive pot of lentil stew. Probably 1500 kcals in there. I had to share a bit—I’m sorry, I wasn’t man enough to eat it all!

We played some Cards Against Humanity and shared some fantastic alcoholic beverages—I definitely need to bring up some whiskey to heat up next time! One round involved someone getting killed with powerful thighs. Another round involved Devon losing his virginity to passable transvestites. Oh, the humanity!

Having had one hour of sleep the night before, I retired to my pyramid tarp. The next morning I awoke to this:

One of the perks of sleeping under the tarp include being able to see what’s outside right away. The only downside was probably the cold breeze the blew over my exposed nose and mouth during the night but otherwise I was toasty warm and dry. I’m sure everyone at the hut had some restful sleep after getting inebriated Being in the mountains feels like being at home for me. But as much as I want to stay, I have to return to civilization. At least we were given this spectacular view just as we said goodbye to Elfin Lakes and Opal Cone.