Written by Harry Cobb, Photos and Captions by Tobias

This being my first month in the VOC, I don’t know if there’s a particular formula for Trip Reports (although I read a bunch – strong work!). So I’m just gonna go ahead and tell you what happened… enjoy.

The trip was organised and led by the intrepid master-of-motivation, Tobias. The plan: hike up to Garibaldi Lake, camp there for the night, then tackle the Black Tusk on Day 2. The weather forecast was looking dire, to say the least; but even in anticipation of a pretty soggy weekend, the 20 or so participants were feeling pretty stoked to get stuck into some gritty outdoors stuff! Morale high. 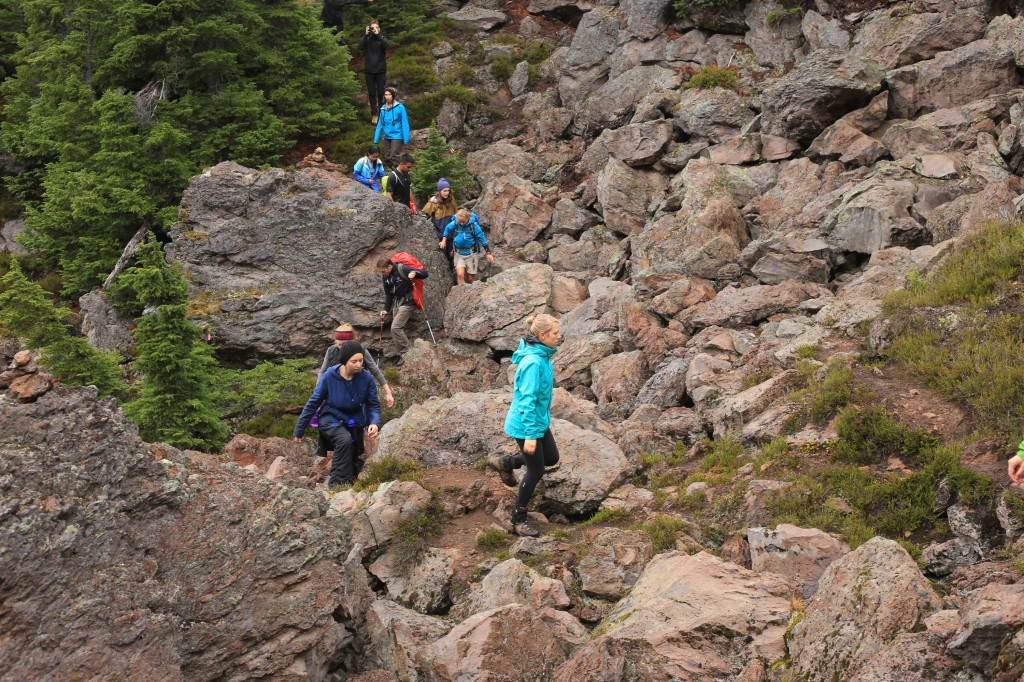 A brief period of only a minimum amount of rain.

The alarm went off at an ungodly 5.30am on Saturday: after a few minutes of loitering in some already-strong rain, a bunch of us were piled into Helena’s small-but-mighty Rav4 with wheels rolling at 6 sharp. I’d fully given myself up to the fact that I was going to be wet all weekend, and I was determined that I didn’t care anyway – nonetheless I spent most of the journey to the trail head with my eyes closed, pretending to sleep and that the massive grey clouds hurling water all over the place weren’t actually there. Anyhow, we arrived a while before the others, and Helena amused herself by smashing her door into the car parked next to us. Simple pleasures I guess. Before too long we were all assembled, strapped to our bags, and beginning the 9km march up to Garibaldi Lake.

The trip was, first and foremost, staggeringly beautiful from top to bottom! As an exchange student, getting to be out in BC and exploring this stuff is a real pleasure. The climb up was amazingly sheltered by the trees, so a a while the rain was almost forgotten as we hauled-ass up the muddy switch-backs. The group splintered up a bit as people took their own pace, but up at the front it seemed like we’d made it to the fork off to the meadows/lake campsites at the 6k mark in no time. 2.5 hours maybe? At this point we stopped to regroup, and saw some of the VOCers doing the one-day trail-run coming back down again, running strong. We salute you! 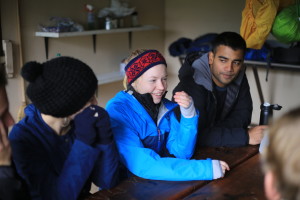 In the relatively dry.

We made it to Garibaldi Lake at about 2pm. I think. I didn’t bring my watch. Anyhow, by mid-afternoonish all of us were squared away, with a tent pitched in the least-rainy nooks and pockets of the woodland we could find. Then we chilled out a bit, had some scran and got warm in the shelter of the hut. Morale still high. 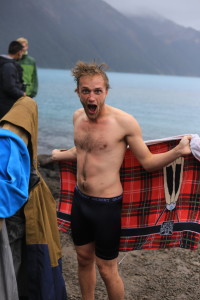 Enjoying being wet for once.

After a while, most of us went for a jump in the lake. I’ve been in some cold water before but this was brisk by anyone’s standards. Might had had something to do with the rainclouds. Or the biting wind. Or the glacier. Who knows? Anyway it was pretty therapeutic (cathartic, even?). Once dressed Tobias led us on another Indian-file march through an epic, Lord of the Rings-esque boulder field. The trail is unmarked on maps, I believe, but it goes round the south-eastern part of the lake – there’s tape and cairns and stuff marking the trail. Check it out! 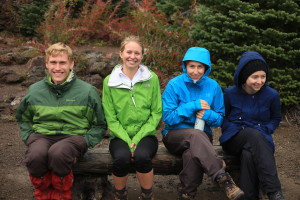 Peer pressure was only partially successful. Sitting on a bench, happy to not be in the cold water, are four hikers.

That night, Tobias and Fangwen revealed their “surprise”: They dragged three litres of wine, some 75% Bacardi rum and a whole ton of cone-shaped blocks of sugar. Plus a whole bunch of cinnamon, spices n’ tings! Hats off to them both, the result was a real masterpiece: think a really fancy-ass, Bavarian style vin-chaud with a lot of fire and splashing rum around. Quite spectacular! And delicious, and for some very more-ish indeed. Particularly effective were the grapefruit slices thrown in the mix, which had done a good job of absorbing rum… I ate loads. After a skinfull of that, I slept very soundly. Morale still very high indeed. 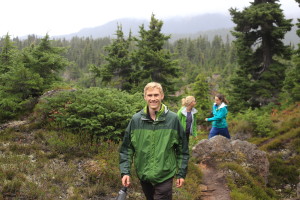 Spirits were high, despite the rain.

This is getting long so I’ll cut to the chase re: the next day. Black Tusk was a no-no. We met a guy on Saturday who was just coming down from the peak, and said the visibility was down to zero, and he was worried he would just ‘step off’ at any moment. That morning, the cloud cover wasn’t any better. We considered Panorama Ridge, but since the top 2/3rds of it was covered in mist as well, we figured what’s the point. Instead, we went for a swift and still wonderful blitz round the meadows, then bailed back down the trail to get toasty in our cars. Unbelievable colours in the flora, and the old-man’s-beard stuff clinging in the trees was eery and spectacular.

In the parking lot, three or four cars, picked seemingly at random, had been broken into. Among them was Chrisel Brako’s, unfortunately. Good news is they didn’t find anything to pinch, but the drive home was a bitch of a fight with the weather, and presumably not fun with a broken window. Sorry big guy, hang tough!

That’s pretty much it… peace.