People who came up to Brew:

On Saturday 21 May, 8 of us headed up to Brew for the long weekend.  It was nice to see the familiar Jeep waiting outside my apartment, with Roland and his son Dave waiting inside. Then we went and got Lucy and Alberto, before meeting the rest of the group. After some faffing about we left the trailhead at about 12pm. It was cloudy but no signs of rain.

Being a tropical creature, I am very afraid of snow, partially because when I was 11 I got hypothermia on Mt Titlis in the Alps (in the summertime I must add), and because I’ve ever lived anywhere near snow before. So this was my first experience winter hiking/camping. The hike up for me was tedious because I didn’t know that you had to stick your toes in first (I tried to have my feet match the gradient of the slope, or whatever the science term for that is) and ended up lagging behind, mostly exhausted. Everyone was nice enough to wait for me though. I fell a couple of times. I packed based on the weather report and had no idea that snow reflects light, and that snow-blindness was a thing. So I had no sunglasses for the hike up, and was really worried that I would be blind by the time we got to the hut. 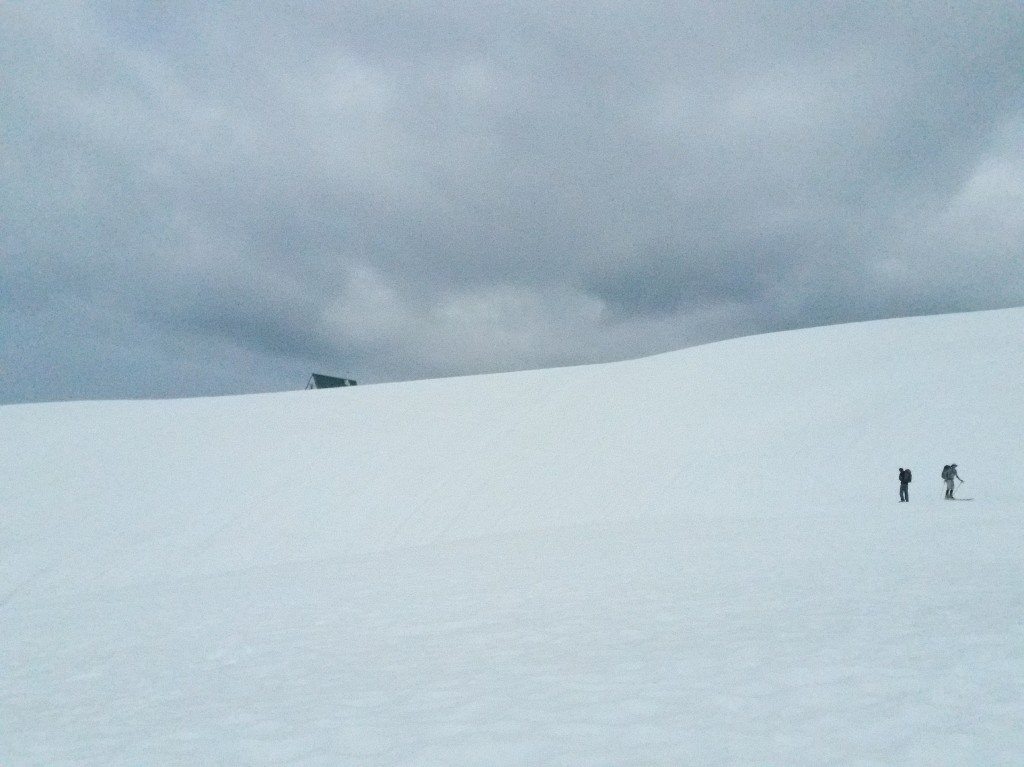 Dave and Bruno head up to the hut

After a four-hour hike (yikes), we ended up at the hut at around 4pm. Surprisingly, no faffing about was done and we split into two groups:

The Outhouse Crew (fixing floor of outhouse, mostly, and finding a burned plastic pail) and Firewood Crew  (getting firewood for the night and for future use)
The floor of the outhouse was unstable and stuff was done to fix it. Roland will probably explain more but here are pictures that will hopefully explain what we tried to do: 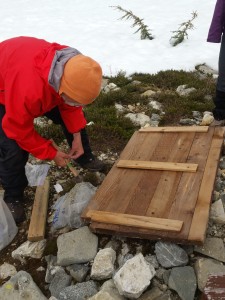 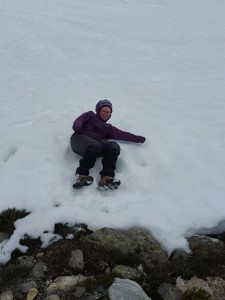 Lucy rolling about in snow after working on the outhouse. 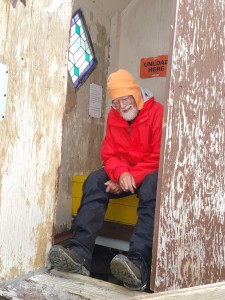 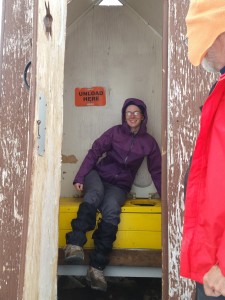 Later on some people went to climb Brew while others stayed behind to work on getting more firewood. Around dinner/supper we were joined by two UofT students who were here for the long weekend. They helped with fixing the hut windows. They also said that the VOC was much cooler than the UofT outdoors club. 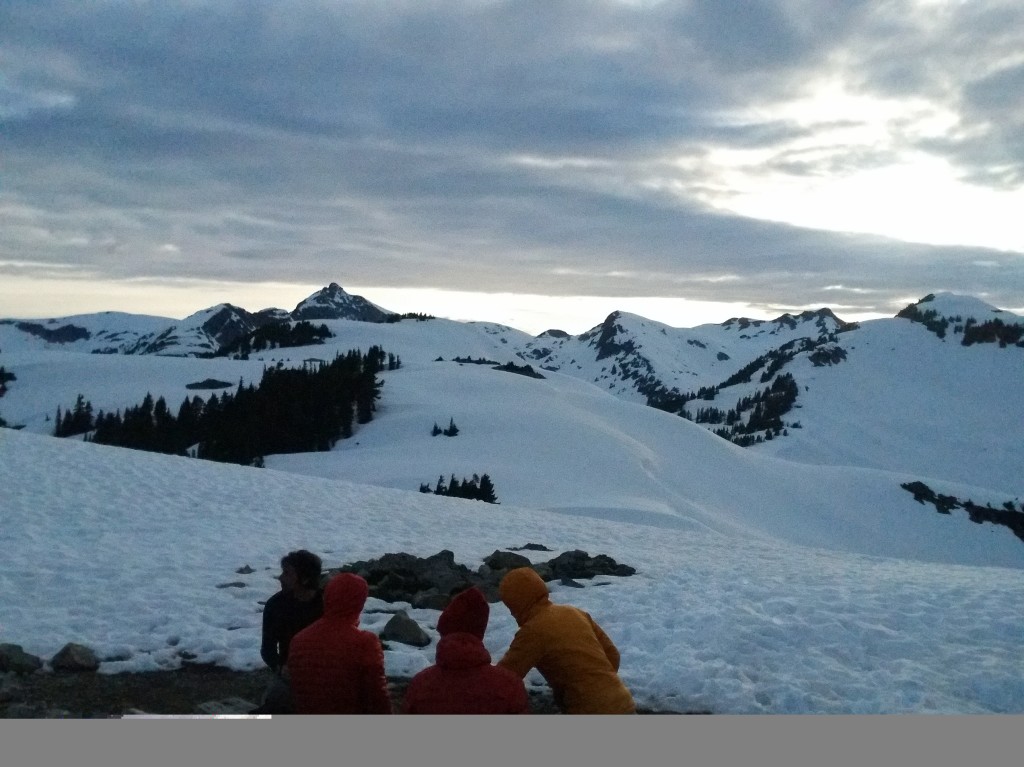 We used the heater at night but this was a mistake, the hut is well insulated, and together with the heater, the hut quickly turned into a sauna. HOT!!!! Most of us ended up sleeping on top of our sleeping bags (and apparently some in their underwear).

The next day was a whiteout, so we were mostly stuck indoors. Perrine, Jean Yves, and Tomasz went hiking but returned shortly due to the bad weather. Lucy made a two full card decks out of all the incomplete card decks, they are now nicely stored by the bookshelf. Bruno chopped more firewood.

I worked on my personal projects of sledding nearby, using an axe / hatchet to cut down useless plastic stuff into smaller portable pieces, and finding something in my pack to use as sunglasses (or an eyeshield) on the way down.

Later in the day we were joined by Scott, Lea, Line, Christian, and adorable little Fenya (probably the first toddler up Brew!!). We didn’t use the heater that night, and there were about 15 of us in the hut and it was still warm.

I was nervous about heading down in the fog the next day so I tried to figure out how to walk downhill in the snow. Perrine and Lucy ended up teaching me how to do it (thank you!), and hiking down in the snow was a breeze.

We left the hut at about 10am the next morning, but not before we watched Fenya playing in the snow, too cute.  On our way down we passed the Irish Ultimate Team who were trying to find the lake – we don’t think they knew it was still snowy up there. We also saw a hunter dressed in camouflage and I heard a couple of gunshots. I’ve no idea if it’s hunting season but maybe be careful on your way in and out in any case. All in all, a fun long weekend. Thank you Roland for organizing such a great trip and keeping people like me safe.

Things accomplished at Brew:
Got some firewood

Fixed outhouse
Fixed window
Things we did not accomplish:
Build a snowman 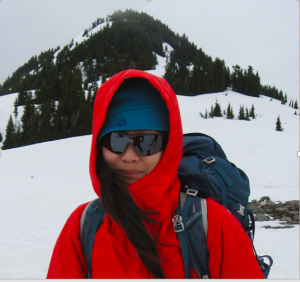 It doesn’t matter if you forget your dark glasses as long as you bring your phone, because you can always call the Sunday crew and ask them to bring up glasses for you.

** It should be noted that Roland had specifically stated in the packing list that we needed a red raincoat, and most of us followed as per his instructions.

*** I used my aquatabs (with the foil kind of opened) in melted snow. Earlier in the hut someone had mentioned, as a joke, that aquatabs turned into cyanide when left in the open. I dumped all my water because it tasted extra bleachy to me – I am gullible like that.  Moral of the story is: google whether or not aquatabs are cyanide before making any decisions. (They are not)

Trip was good, and productive.  Hut is in good shape.  We found enough dead snags to supply a years firewood if we can get somebody to come up with a chain saw to speedily cut it into stove-size pieces.  We decided that there is still too much snow up there to conveniently do the Alcoholic Traverse, so we should wait for a month.

Various methods of travel were used.  We had six on skis, three on snowshoes, five with just boots and gaiters, and Fenya was mostly carried.

The Hut is user-maintained, which means that all sorts of random city-dwellers arrive up there at various times, and each one apparently leaves one sock up there because there sure are a lot of abandoned socks.

We were proposing bringing a couple more plastic laminated signs up there to help educate the city dwellers.  One should clearly state that not more than four people should try and use the outhouse at any time because the floor is rated for only four people.  The other sign should specify that if you are planning to char your toilet paper, you should do it in the metal bucket, not the plastic pail.