This was advertised as a work trip. We did not have to climb any of the mountains in the area, so we could concentrate on getting things done. We spent July 01 working on the trail, July 02 at the Hut, and July 03 mostly driving home in traffic. There were many people up there. Most of the people up there were not VOC Members and didn’t know anything about VOC. They were very appreciative of the work we did on the trail, and on the Hut, and those not tenting were happy to leave their cash donation for the use of our Hut. One group came up planning to tent, but in the end stayed in the hut with the “Bachelors Party” because “it was cold in the tent”.

We heard that the bridge at the outlet to Long Lake had been destroyed because it was not raised at the end of summer, so it was crushed by the weight of snow. It’s only rated for 500 pounds, after all. When I got to the bridge, I noted that Devon had walked across it despite it being V-shaped, so we did, too. On the way back, a couple of the Bachelors Party people bent the bridge straight and strapped a couple of local logs to it, so it looks almost good as new, but now you can’t raise it at the end of summer. And it may not survive next winter; bridge #1 was made of logs and it did not survive. So if you have any bridge-building skills that you want to hone, feel free to do so, but if you are just worrying about how to get across the end of Long Lake, don’t worry. Just make sure that whatever you build does not require a competent operator because we don’t supply competent operators. 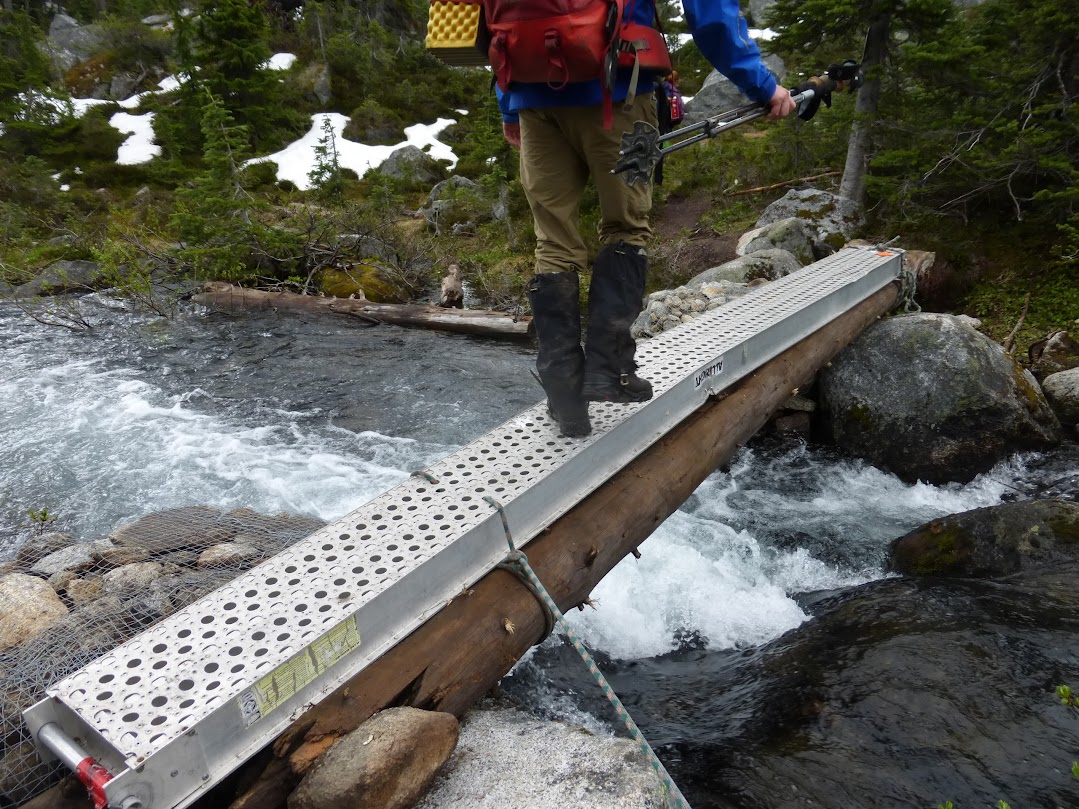 Ever since the Hut was built, in 1998?, we have been burning white gas (naphtha, Coleman fuel) for cooking and lighting, and sometimes we even had a couple of catalytic heaters making it slightly warmish up there. But there are problems with white gas appliances. Frequently people set fire to the counter where the stoves are, and this often means that the fire extinguishers get used, and then we need to haul in replacement extinguishers, and the white powder gets all over everything. Besides that, these white gas burning devices have all sorts of features and details which modern people can’t be bothered to learn about, and they get mis-treated or broken or destroyed pretty fast. I guess if they had competent operators, they would be fine; my Coleman stove doesn’t give me any trouble.

So, now we don’t have white gas stoves any more. We are going to carry in our own personal supply of propane, in one pound bottles. We carried out the two old stoves (not so old, one was hauled up there last November). We hauled in a fine new Coleman propane stove. We have not yet replaced the lanterns with propane lanterns, but we could. We could buy propane-burning catalytic heaters if we want to. We suspect that random urban people should have no problem with operating propane appliances, and the appliances have fewer moving parts so they should last longer, and they don’t leave puddles of fuel on the counter. Soon there will be no point in bringing up white gas unless you also bring up a stove that burns it.

A one-pound bottle of propane contains about 454g of propane, and weighs around 850g An empty bottle weighs around 400g. There’s all sorts of stuff on the Internet about filling your own bottles to save money. The Coleman Company tells us to never refill disposable bottles.

The Coleman Company clearly states that all propane burning appliances are to be used outdoors only, but certainly they are no more dangerous or toxic than similar white gas appliances.

It’s good to try and anticipate any problems from this. Supposing you bring up your propane bottle and partially use it. Should you leave it up there for others to enjoy, or should you carry it out? What if it is completely empty? What if you have no idea how much propane remains in it? Will empties accumulate? Maybe. Hauling out empties is probably easier than hauling in replacement fire extinguishers.

No trip to Phelix is complete without some discussion of heating. For various reasons, and all surmountable if we have the will, there is no heat at Phelix unless you bring a lot of friends up with you, and body heat is not all that abundant when it’s thirty below outside. Two possible solutions to this were considered. A micro-hydro-electric project would probably cost around $10k, and maybe we could get some granting agency to foot the bill (MEC?), but unfortunately it may be a challenge to find enough flowing liquid water to generate appreciable electricity when it is thirty below. A much more predictable alternative is to burn wood. MEC and VOC have entered into some “contract with the devil” to not burn wood up there, but last weekend we found three large bonfires burning outside the hut, with no shortage of handy avalanche killed wood being available. Jeff Mottershed recently bought a wood burning heater on the Internet for $100 and personally carried it the 12 km into Harrison, so mere mortals could probably get one into Phelix without needing a helicopter. If we asked for money from MEC to put in a wood-burning heater, then if we got the money, presumably we’d also have the permission. One hundred percent of the ladies on our weekend work party said that they would definitely run around the hut naked on New Years Eve, if there was a wood heater to get warm with afterwards. It should be interesting to see what VOC does with this.

We trashed a lot of slide alder using the loppers, and sometimes, the brush saw. The trail from the hut down to the car is in excellent shape, but the road is still pretty bushy; you could definitely scratch your paint job on your 4WD. At least ten 4WD cars made it past the slide, seven made it to at least the one-log bridge, and three crossed the creek and drove to the end of the logging road. The uppermost bridge crossing Phelix Creek is rated for two tons, so if the Authorities decide that it may collapse, they will either block access to vehicles or dynamite the bridge. If they block it, that adds another 650m to our trip into the hut in summer, not a big deal, but if they dynamite it, this will be a major inconvenience for skiers. Did I hear of some people who like building bridges?

We hauled up a lot of one-inch poultry netting “chicken wire” and stapled the top to the hut and buried the bottom. This should keep marmots and chickens from going under the hut and eating the floor, which has been a major problem at Harrison Hut and was at Sphinx Hut as well until we did something similar.

There’s a lot up there, mostly in the cellar, because you never know what you might need, though clearly some of it, like dried paint in cans, will never be needed. Sending a whole bunch of new Members up there to carry down garbage is not a good solution; leaving it in the cellar is not too bad a solution. There’s also a couple (few?) partially empty petroleum drums near the outlet to Long Lake, but VOC does not have any particular responsibility for them; they are not ours.

Is lovely, except the frame wasn’t installed very well and there is a space at the side of the door where a mouse could squeeze through. If I was a carpenter with power tools and nothing else to do, I’d certainly re-hang the door. Door is in perfect condition, but needs some boards to shim the rough opening (RO) to make the door fit perfectly. Probably, as a result of experience gained by catering to random urbanites, we should buy and install an automatic door closer, or we will come up and find the door open and the hut full of snow.