We left for the trip very early in the morning, my ride came at 5:15am, and made the 2ish hour trip to Mt. Currie Coffee in Pemberton where we all met up. Surprisingly, all 16 of us made it to the meeting spot right on time for 8am. Once we did a headcount we were off to the lakes. Once at the parking lot, we saw a lot of backpackers heading up to the lake already so we had to hurry and elbow the other nature lovers out of the way. We love nature MORE! Plus, the mosquitoes were out to get us. So we started the 400 meters to the upper lake.

The hike up felt pretty steep with our heavy packs, but before we knew it we were at the second lake with only about 15 more minutes to go until the third and last lake. When we got there and rounded the corner to the camping area Dmitri mumbled something like “What is this, base camp?” It certainly had that feel. It took us a while to find a place because there was so many people, but we found some spots although we were divided by a cold stream. 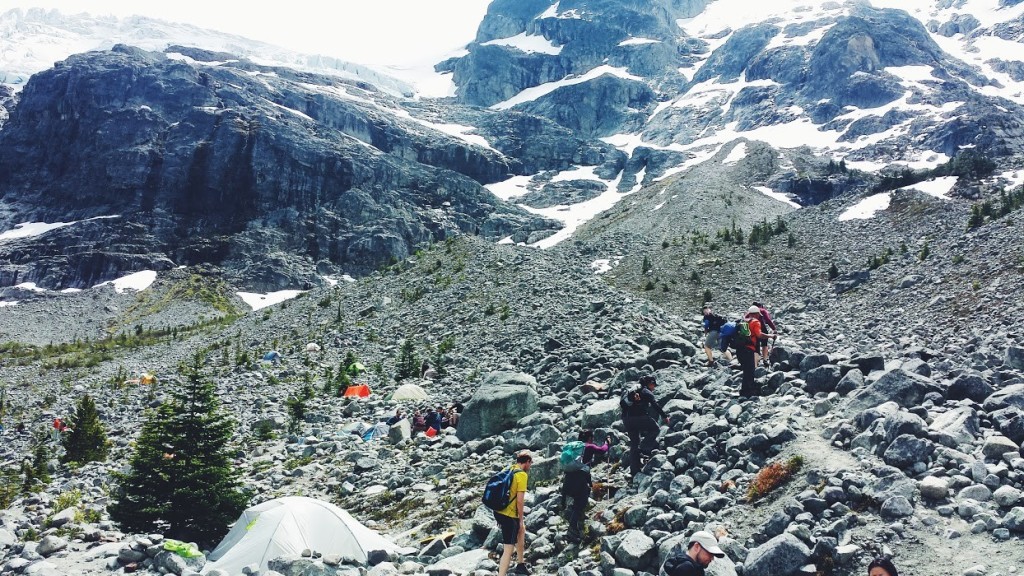 I had been to Joffre lakes a few weeks back and seen/heard a few small avalanches on the slopes, so I was happy to see most of the snow had melted. 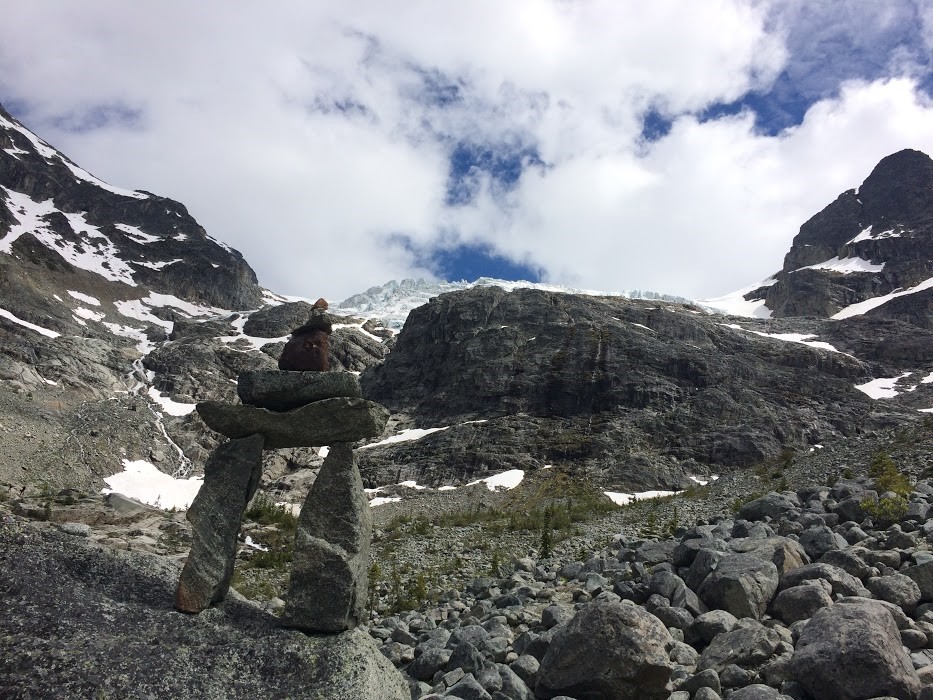 We decided to go up to Tszil peak the next day so we set up camp and then left to explore the Matier Glacier. But first some practice with the ice axe! We all sat there while Birgit demonstrated on the slope and then said “who wants to go first?” but she received only blank stares. Eventually, we all started throwing ourselves down the slopes and it ended up being really fun to do…and to watch.

After that we went up a steep slope from the lake which took about 20 minutes, took in the view of all three lakes, and then headed left to the glacier for about 10 minutes. The glacier was amazing and very blue in places. Someone even found a spot where you can kneel and look under the glacier to see an amazing blue light that probably gives magical powers, I am not sure, but probably. And then we proceeded to do a “fake mountaineering” photo shoot by the glacier complete with props and stage crew. We then headed back down and ate our warm meals at camp. Those of us on the other side of the stream passed out a bit earlier as we were not too enthused about going back and forth in the freezing cold water to hang out with the others, there is no really great place to cross. Birgit had the best sleeping spot and slept outside under the stars. Birgit teaching us how to self-arrest with an ice axe, photo by Alannah Wallace. 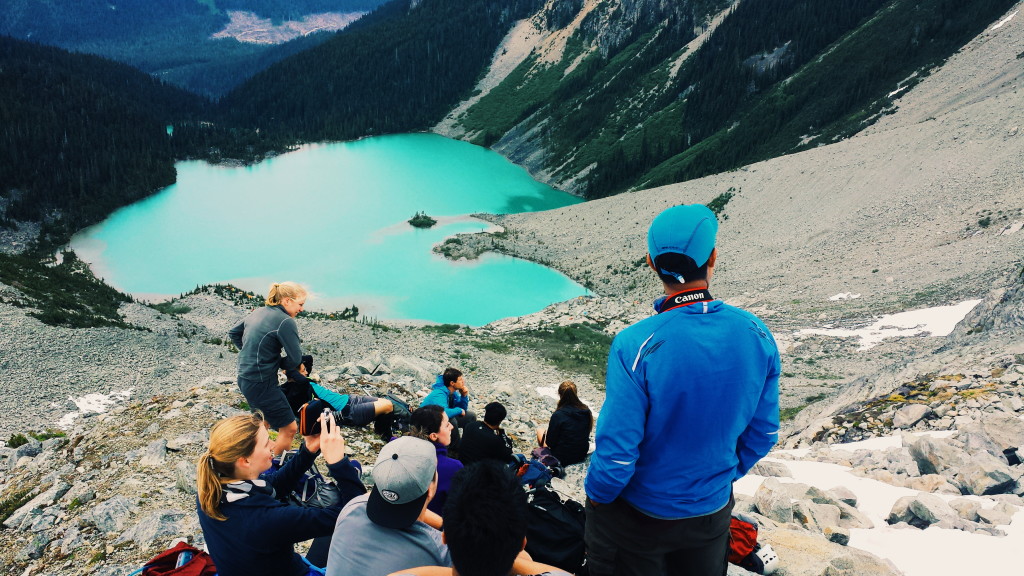 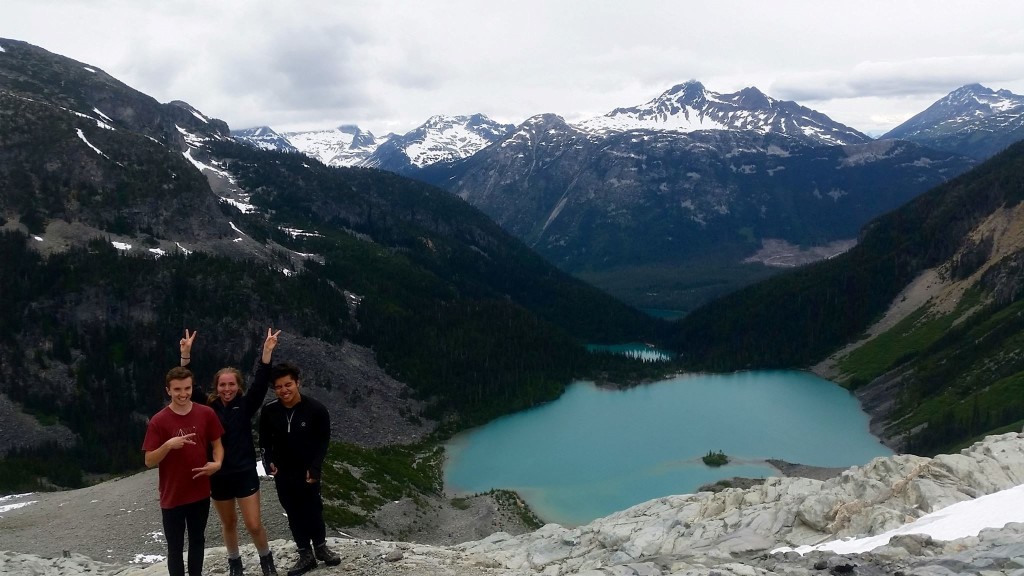 Scott, Kimmy, and Brenden with all three lakes, photo by Alannah 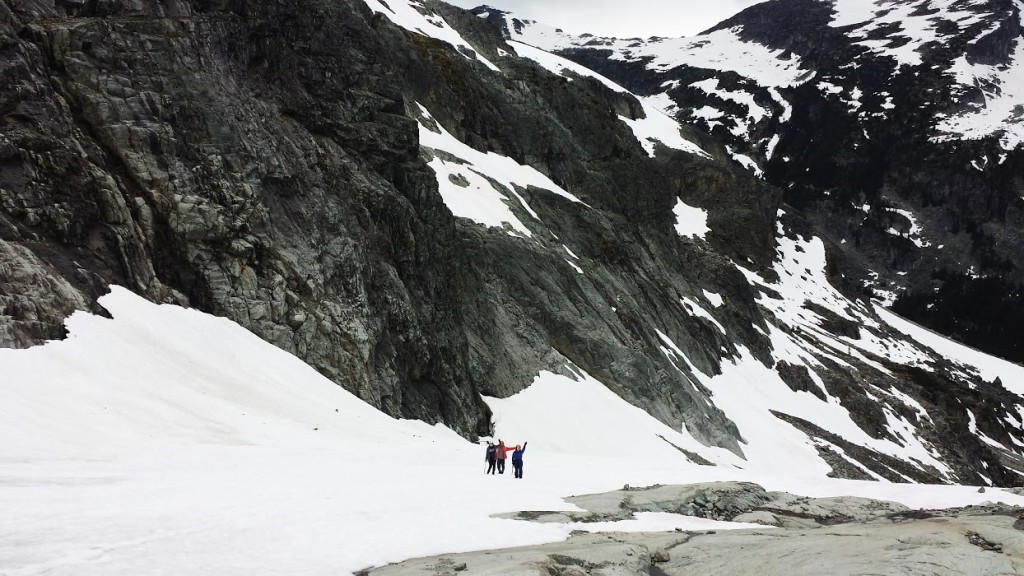 On the way to glacier, photo by Alannah 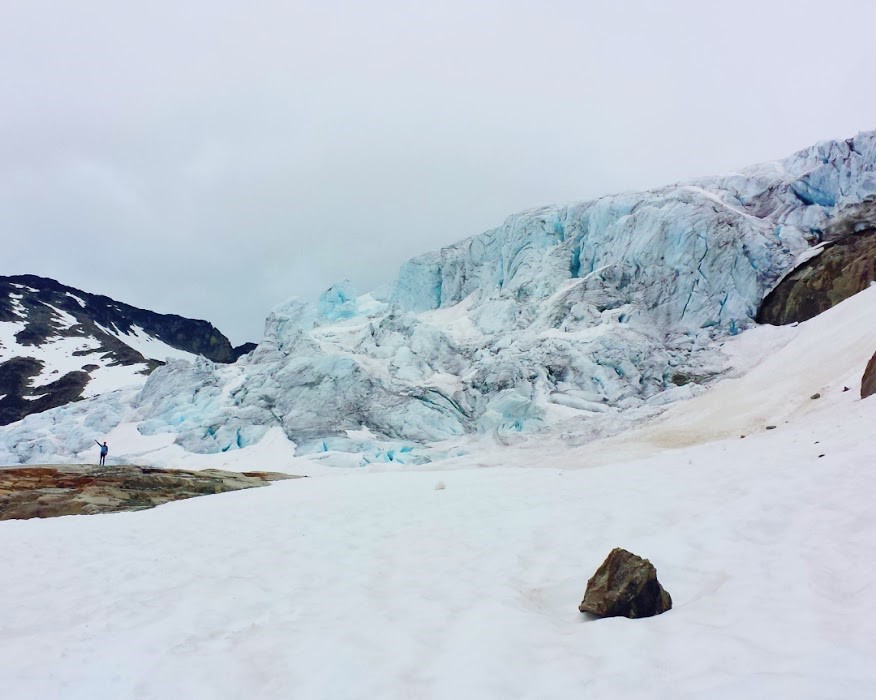 Scott by the glacier, photo by Alannah Close up of the glacier, by Rebekka Schulze Magic blue glow under the glacier, photo by Alannah 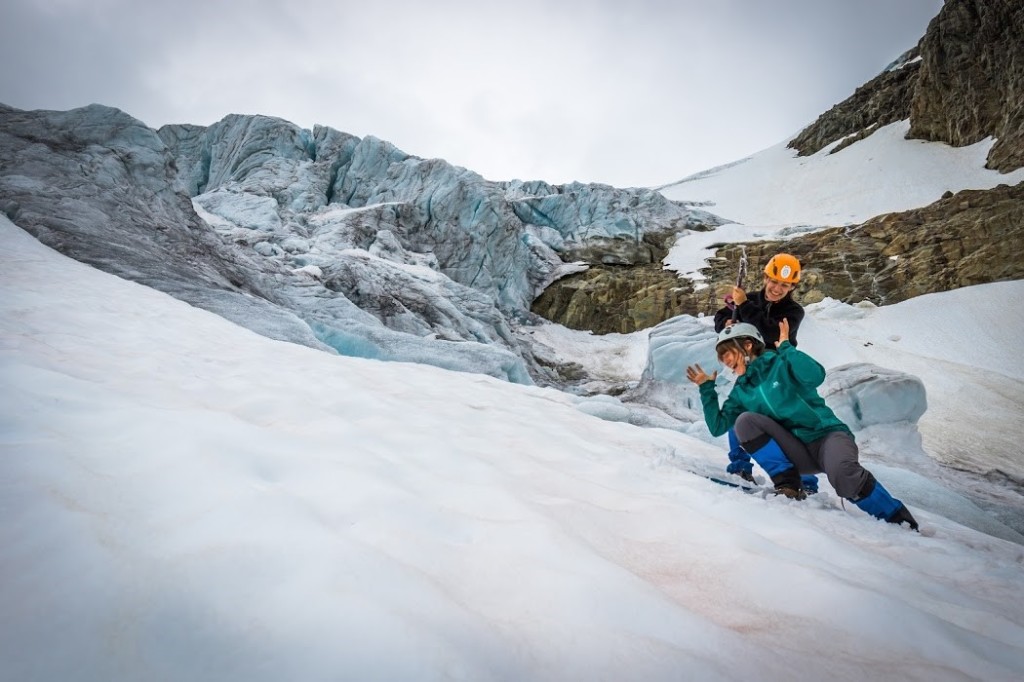 Chrisel happy as can be on his glacier, photo by Steve Cabral We woke up around 6:45 the next morning to a perfect blue sky and made some breakfast. Eric made coffee and bumped some tunes and Theresa and I made oatmeal with fresh peaches, strawberries and blueberries. It was basically an alpine Starbucks at our campsite. We then started packing up the tents. The plan was to set up one tent closer to the trail head, pack all our extra stuff into it, and hike up to the peak with day packs so we could leave quickly once we returned to the lake.

At around 9:30am we got to the bridge crossing at the upper lake and found our path. We soon entered a moss covered forest with crystal clear streams of water running through. It looked like something from a fairytale. We then made our way through a boulder field to the first slope where we got out our ice axes, gloves, and helmets. Then Dmitri kindly made the kick steps up the slope so none of us had to do any of the hard work. We went up 3 slopes before we got to the col between Tszil and Taylor peak. The views from there were amazing and we could see another equally green/blue glacier lake on the other side and a ridge leading to another mountain that looked tempting. Up the slope, photo by Birgit Rogalla 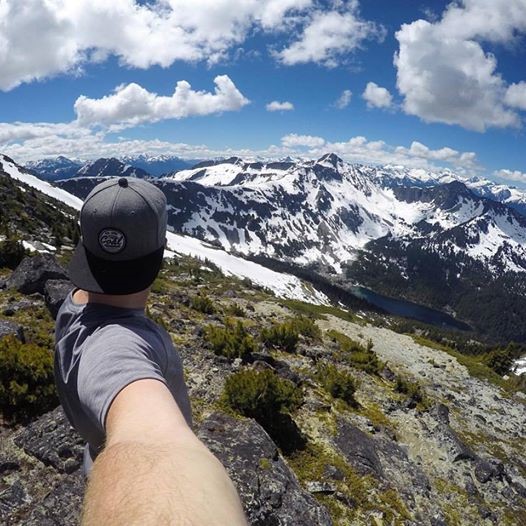 We then started the real scrambling, probably a class 3? And had to do some route finding along the way. Everyone moved together at a good pace especially for there being 16 of us. It wasn’t long before we reached the peak! On top of Tszil at 2377 meters we had a great view of Slalok mountain that towered over us and a view of the many mountains around us. We took a group picture, had a snack, and then headed back down. Rebecca climbing up to Tszil, photo by Steve Cabral Group picture at the top of Tszil, picture by Steve Cabral At the top, photo from Theresa Pauly

On the one very short snow patch before the scramble down, I tried to reach for one of the large steps in front of me, fell, and started sliding down the slope. But no problem. I flopped onto my belly whale style and dug in my ice axe and made a quick stop. Then raised one arm in victory. We then continued down and had an unexpectedly smooth decent. Now for the real fun. We had three slopes to slide down. Most of us went solo sliding but Kelsey and Bailey paired up. From all giggles it sounded like they had the most fun on the decent. Decent of Tszil, by Alannah A few sunburns later we were back at the majestic moss forest (a perfect place for future hammocking by the way) and retrieved our things from the tent. I think it was around 5 or 6pm at this time but still clear blue skies and lots of sun. We quickly headed back down and one group stopped at the second lake for a dip complete with floating devices. At the bottom, we said our goodbyes and off we went, satisfied with a great scramble and slide and ready for McFlurries from McDonalds.