Close, but no Cigar: a Winter Attempt on Gunsight Peak

Gunsight peak, named after the prominent notch on its summit ridge (also called In-SHUCK-ch peak by some), lies on the north-east side of Garibaldi park, with its east slope dropping all the way down to Lillooet lake.

Information about this peak is hard to come by and Google only managed to dig out two recent trip reports about summer attempts to climb the peak via its west face. One party tried to reach the summit via “the notch” on the summit ridge, failing due to very loose rock and subsequently calling Bruce Fairley definition of class 3 scramble complete bullshit. The other party went up a steep snow and rock gully leading to the summit ridge, traversing a few tens of meters on the ridge to gain the summit proper.

Caitlin and I left Vancouver on Saturday afternoon, March 18, for the 4hr drive to the Bastion Range road, which follows the west shore of Lillooet lake. Unfortunately, shortly after the turnoff from the Tenas Narrows bridge, we were stopped by snow on the road and decided to camp there for the night. 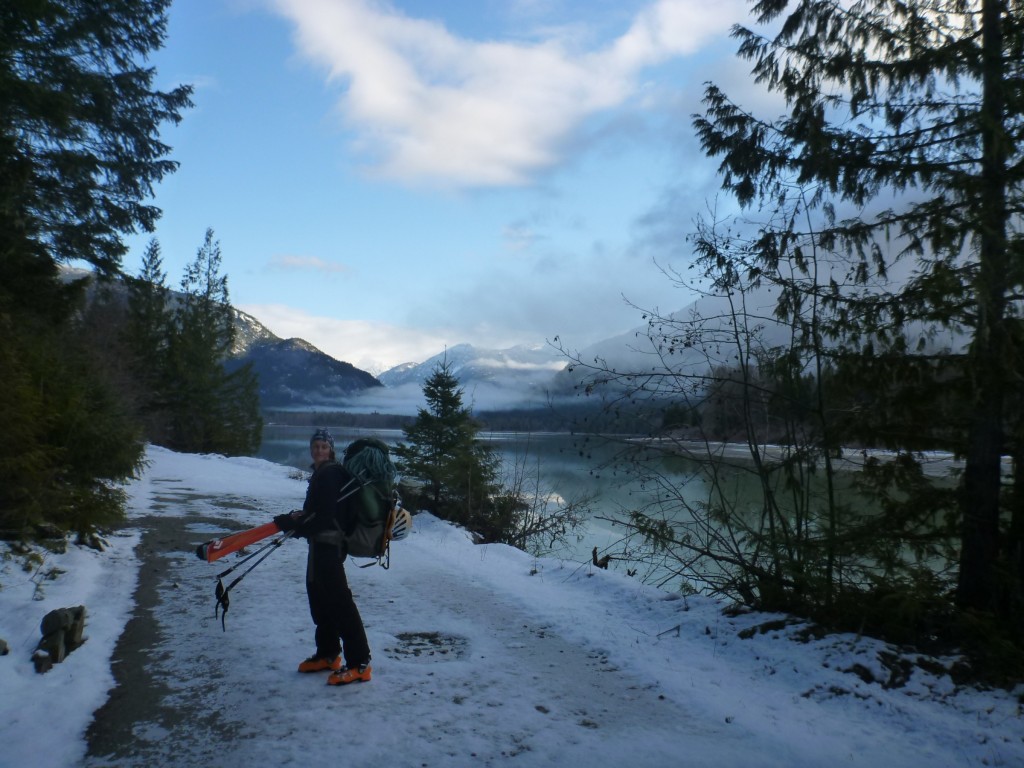 Caitlin on the way to Gunsight. Photo: Julien Renard

Sure enough, we found out the following morning that this 200m long snow patch lead to a perfectly drivable snow-free road for the next 2km. That is, with the exception of a few fallen logs, courtesy of some eager-beavers that value their privacy or epically failed at guessing which way the tree was leaning.. 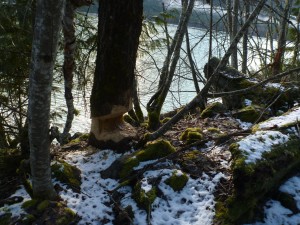 I will finish this one later. Photo: Julien Renard

Shortly after we crossed the drainage coming from the basin between Gunsight and Gunsight N2, we found a logging road making its way up the ridge leading to Gunsight N2. The road was thankfully covered in snow (while everything else around wasn’t) and lead us to a cut bloc at an elevation of 500m. (note: a another road system apparently leads to 700m on the south side of the drainage). Hopping between tiny snow patches for another 200m of elevation brought us in old growth forest through with we endlessly switched-back until we reached the alpine. 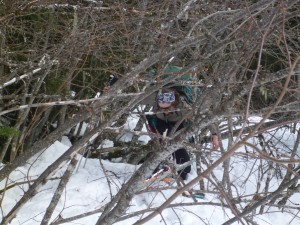 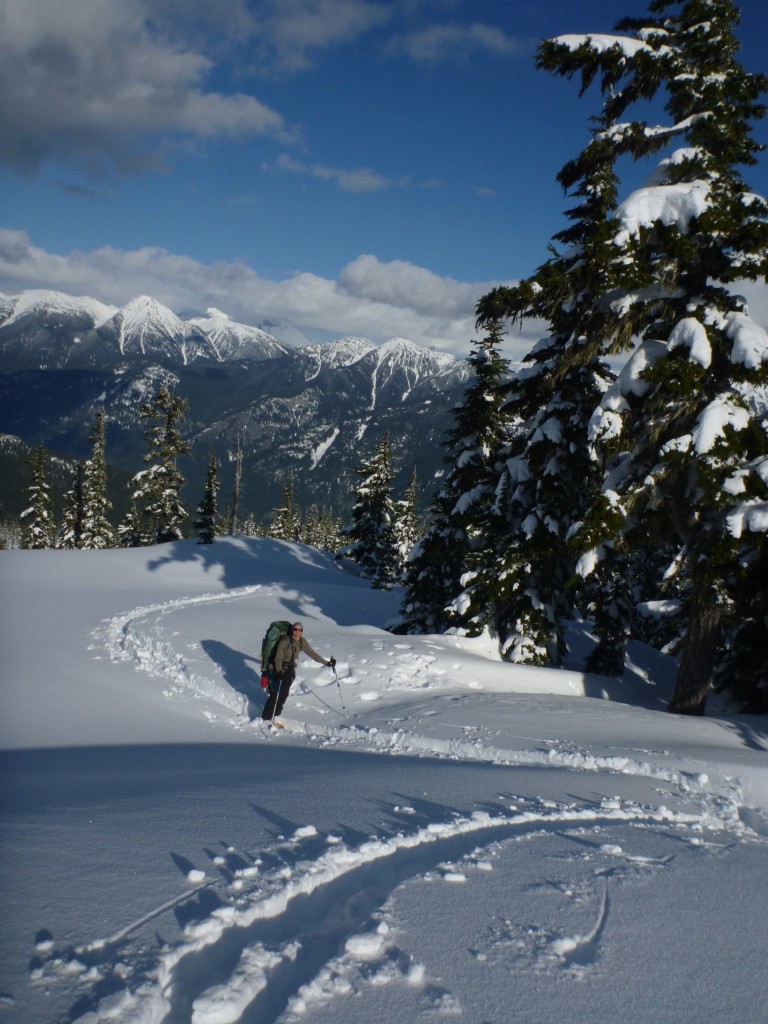 On the ridge. Photo: Julien Renard

Our objective for the day was a small lake just east of Gunsight N2, at an elevation of 1800m, which we reached around 6pm, 10hrs after leaving the car (and after an hour of logging road system “scenic exploration”). 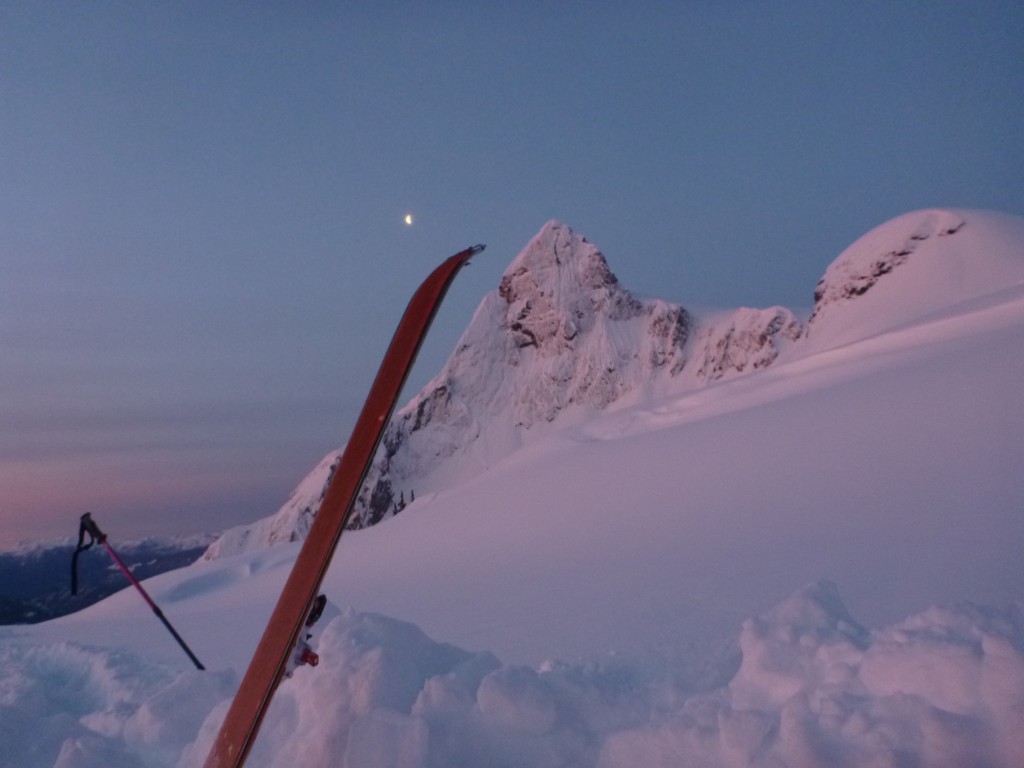 What is nice about setting up camp in the alpine is that you get to investigate the snowpack at the same time. While digging our camp we found this interesting wind crust, 50cm deep, on which all the accumulated snow was sliding without shame or restraint. The crust was 5cm thick and the traditional karate hand-chop crust test revealed it to be indeed unbreakable, while at the same time reminding me that my wrist isn’t. Thankfully, this crust only seemed to exist in especially wind-affected terrain, which our route avoided. 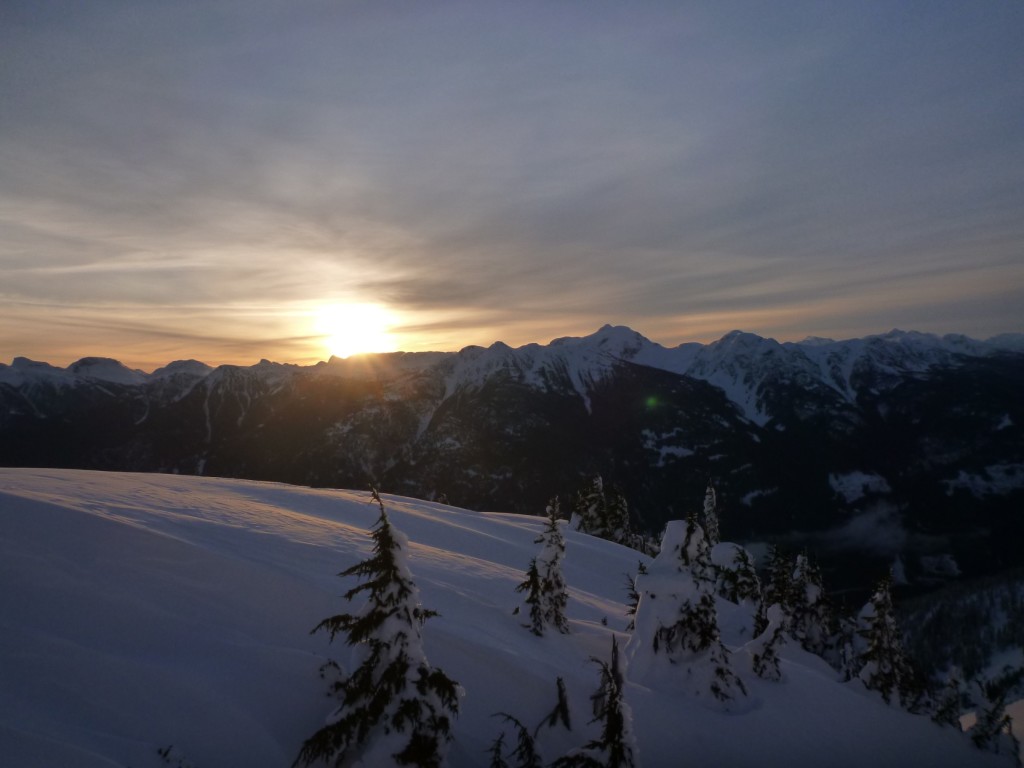 Following an alpine start the following day, we quickly gained the 2000m col between Gunsight and Gunsight N2 and proceed onto the small glacier leading us to the base of the west face. The slope above the notch looked ridiculously steep and was quickly dismissed. Two options remained: a steep gully close to the notch (presumably the route mentioned in the other TR) and a not-so-steep gully in the middle of the face, leading to the summit ridge, which we would then have to traverse. For better or worse, we chose the latter. Reaching the gully involved going up the snow cone at its base, crossing the bergshrund and ascending 15m of 65° rock and ice. The mixed climb proved to be the crux (if you want protection, try religion, or the mafia). Thankfully, 65° of rotten ice quickly gave way to 55° of rotten snow, which somehow relieved me immensely. Excavating a few square meters of the couloir and the rock on its side revealed tiny cracks and bulges fit to use as an anchor. A mere hour an a half after I started climbing, I finally belayed Caitlin up. Eager to show me what a proper climbing tempo should be, she promptly ascended the rest of the couloir, whose angle eases of to about 40° at the top.

Another 30m, 55° snow pitch brought us onto the summit ridge. At that point, it became painfully clear that we wouldn’t be going any further. The ridge is a knife edge, roughly a 100m long, heavily corniced on one side, ridiculously steep on the other. The views were still fairly nice, despite the few clouds that had decided to surround us and satisfied that we had done all we could to get there, we started downclimbing toward the couloir. Close, but no cigar, and no regret. A fair amount of digging, a frantic search for cracks and two sacrificed pitons brought us back to our skis around 3:30pm. 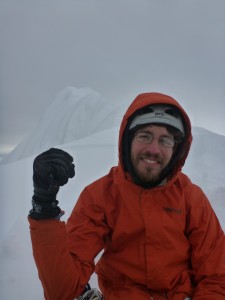 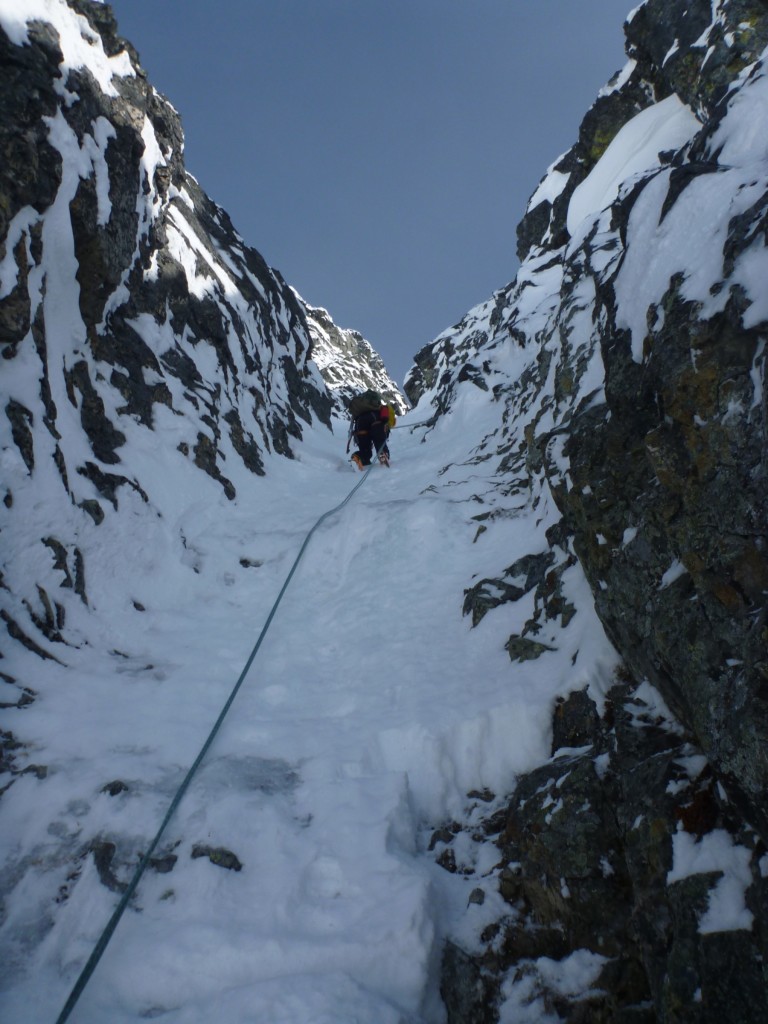 Onward and downward. Rappelling the gully. 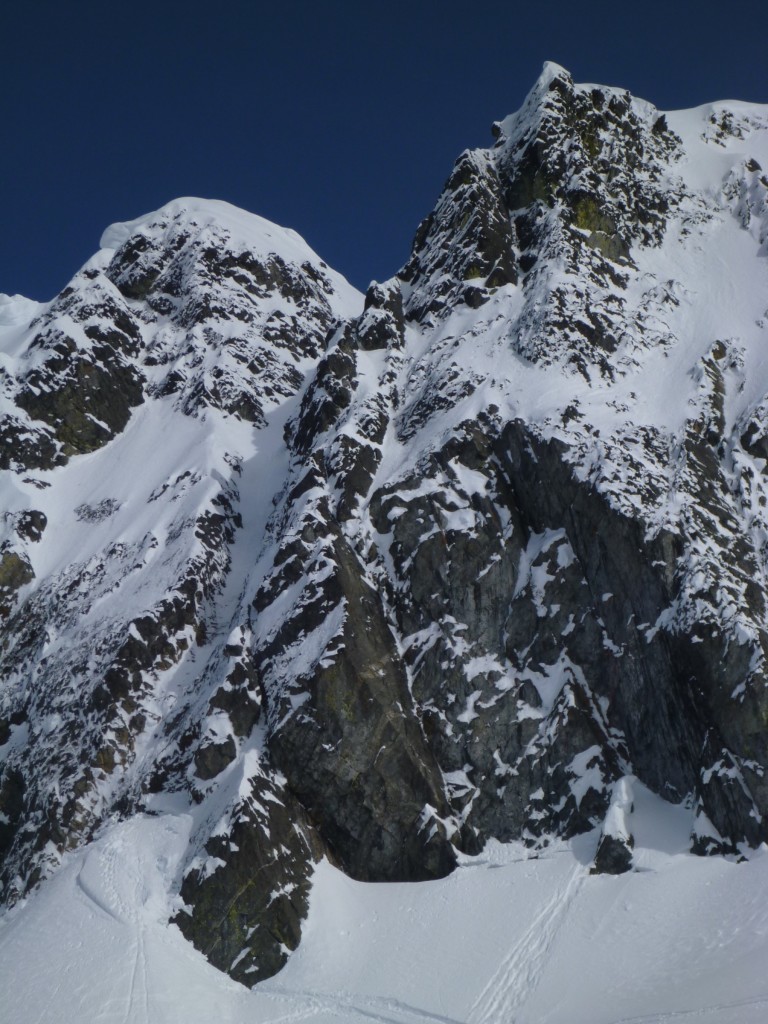 The ascent gully. The angle is quite deceiving. Photo: Julien Renard 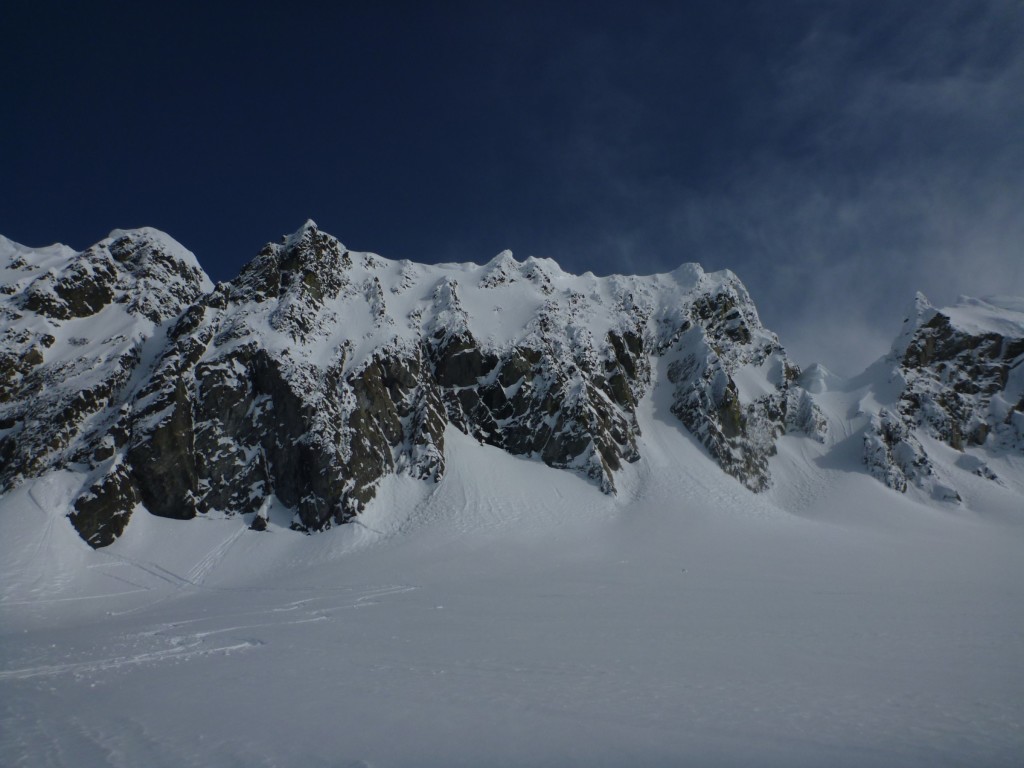 We collected the overnight gear that we had left at the col and started the long descent down the ridge we had ascended the previous day. The snow was painfully heavy in places and combined with our heavy packs lead to some free-form any-which-way survival skiing style. We still managed to get back to the logging road in 3hrs and to the car and hour and a half later.

3 Responses to Close, but no Cigar: a Winter Attempt on Gunsight Peak