An ascent of the Nipple

The Nipple is located near the small town of Boston Bar, north of Hope. Despite its titillating name, it is one of the least flagrant peaks in the area – nearby are Jackass Mountain and Scuzzy. On stormy weekends the region often has the best weather within three hours of Vancouver, and since the avalanche conditions in the area were good, we headed off late Saturday morning, with the Baldwin book in hand.

From Highway 1 in Boston Bar, cross the bridge to the west side of the Fraser and take a right after the rail road crossing, travelling upriver. There are a few deceiving turn-offs that you don’t want to follow. The correct fork, to the left, is a well-established driveway that ends at a house and a locked gate. Now comes the tricky part. Apparently the logging road (Powder Puff Main) was decommissioned a few years ago and the road that accesses it is now privately owned.

As we stood in front of the gate debating what to do, the lady who owns the property and the accompanying Sandy Pines Campground drove up. She was at first reluctant to let us through (something about a former squatters’ camp that had apparently trashed the area), but when she heard we wanted to climb the Nipple she was excited and gave us a key. The deal was that we would post pictures on the campground Facebook page and return the key Sunday evening. (Note: I’m not sure she will always be so willing to lend the key. From the summit, access from the southeast, connecting to a different logging road, looked possible.)

Once through the gate, finding the unmarked turnoff for Powder Puff Main among many unmarked turnoffs is another challenge. Driving this section is definitely beneficial (it saves ~5 km of walking), although challenging with slushy snow (my vehicle is 4wd, high clearance with all-season tires) and slightly nerve-wracking. Follow what looks like the most commonly used road (tending right) until you see stacked piles of metal culverts. Here we parked our car and started the ski up the road to the left (start elevation ~400 m).

The rest of the route:

Though the summit is only 8 km from the trailhead, it involves about 1800 m of elevation gain. The first few km are on a logging road with three or four switchbacks, and we had to take off our skis a few times to cross small streams. The washboard road was reminiscent of a sixpack – sort of the abs of the mountain.  We traced a sensuous trail up among (surprisingly pretty) clearcuts and old burns, turn off at about 1000 m under a big open face. Here there is a short side road that winds up to the top of a little bump, from which a subtle ridge leads up to the burn at the top of the clearcut, and into the lichen-filled, hairy forest above on the mountain’s ribs. Continuing on into the forest, the ridge becomes more and more pronounced – it continues all the way to the summit. Given our late start, we camped on a bench around 1800 m an hour or so up the ridge. 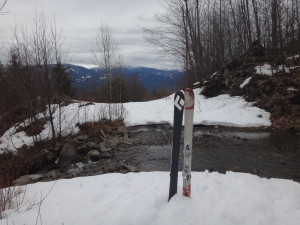 The next morning, four of us summitted the Nipple, around 1.5 hours from our campsite. Likely any route up through the mellow trees will bring you to treeline and a flat ridgetop leading to the summit. The area is wind swept and snow is thin (occasionally just rocks), except on the cliffy side of the ridge where there are big cornices. From here the peak is visible, although it looks deceivingly far, beyond the rocky cliffs like chiseled pecs. Wait – we began to be suspicious. Who did the Nipple belong to, a man or a woman? Unclear. But a view of the summit, neither rounded nor especially prominent, convinced us that the cairn on the peak – perky in the cold wind – was male. 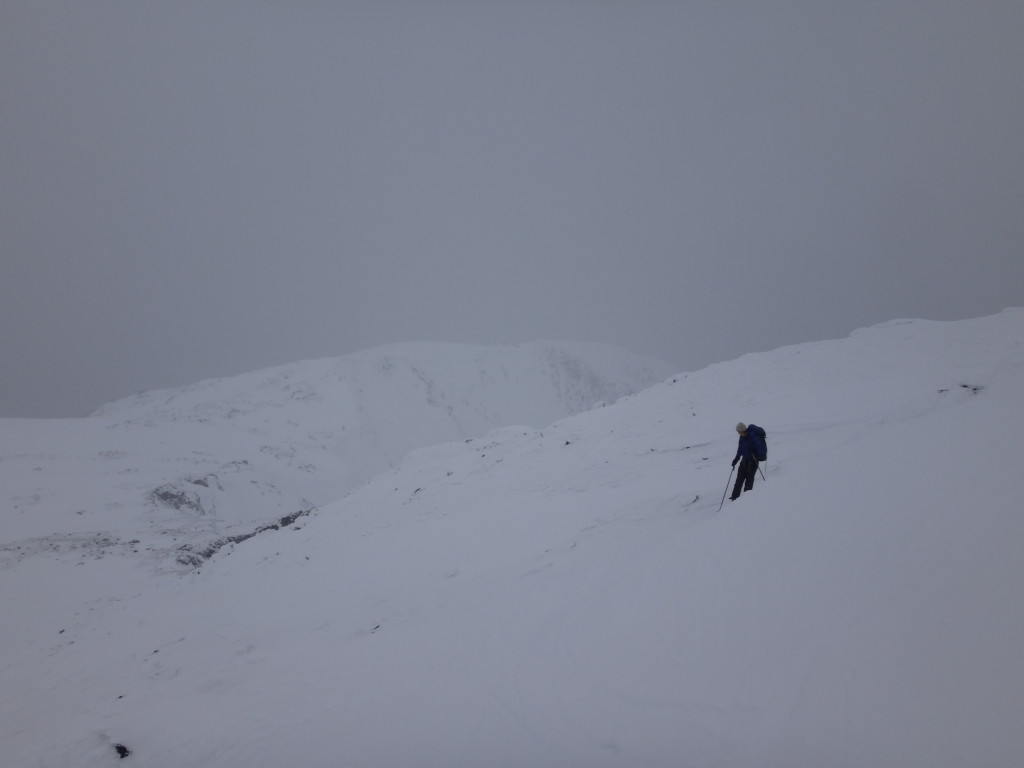 Looking back on the ridge. 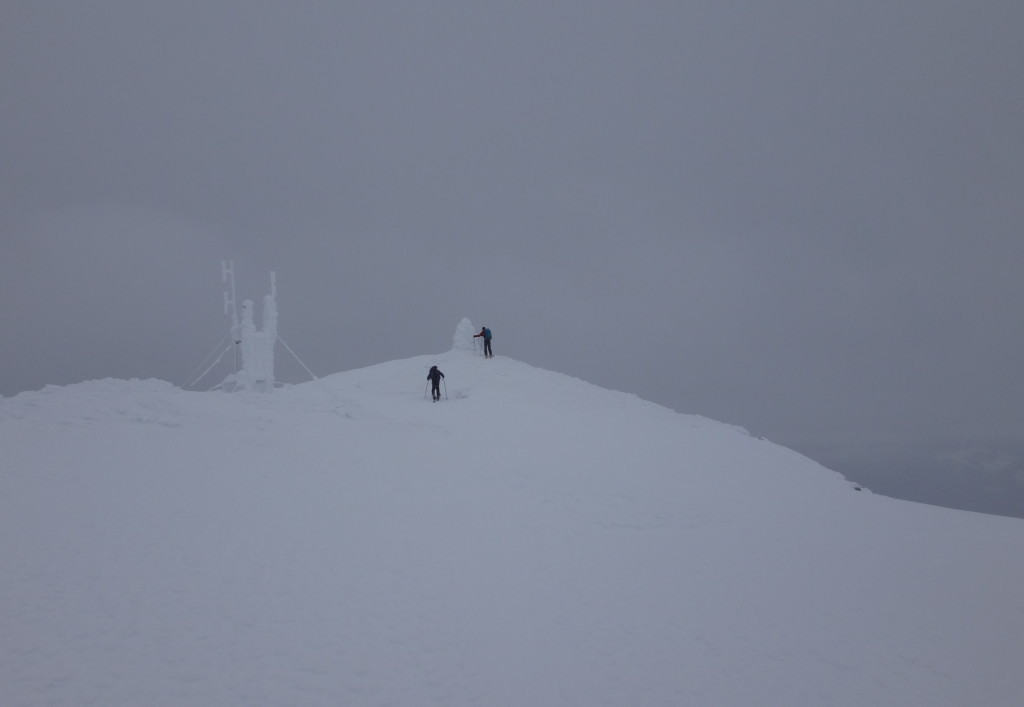 The summit of the Nipple with the radio tower. 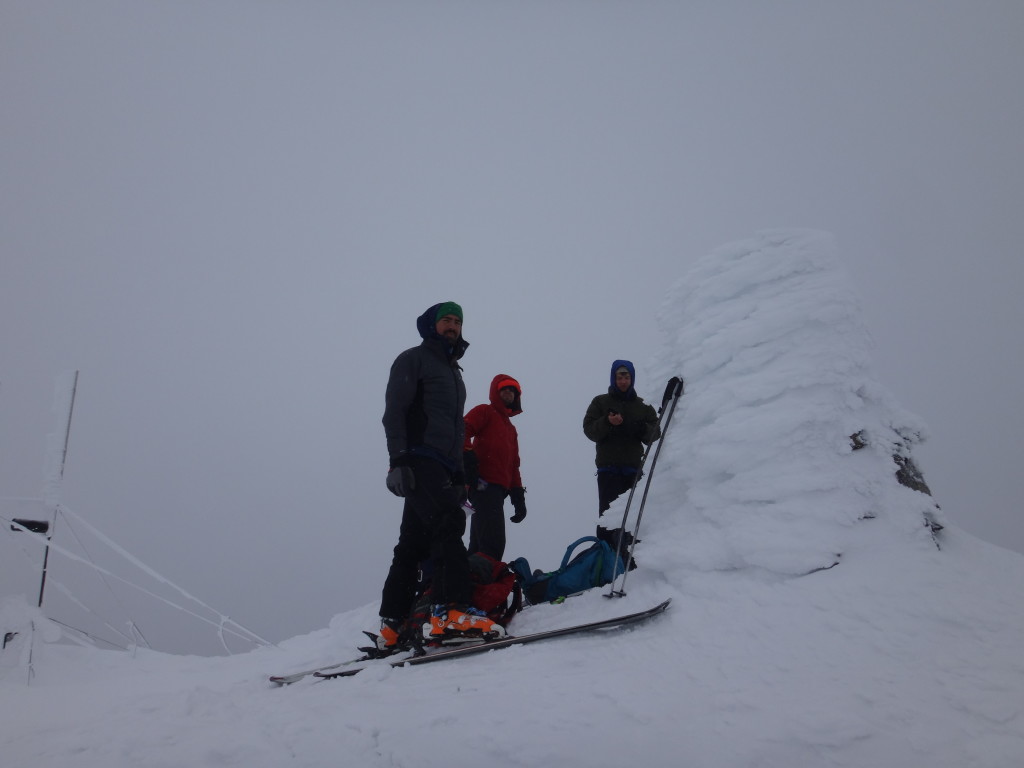 The men inspecting the male Nipple.

Pleased to have divested ourselves of a mildly sexist assumption, we skied down mellow snow of worse and worse quality. The logging road was terrible slush without the joy of spring corn skiing. To our relief, the car made it back out of the logging road. We returned the key and sent the owners a Facebook message to their Campground page — they were very enthusiastic about our trip. 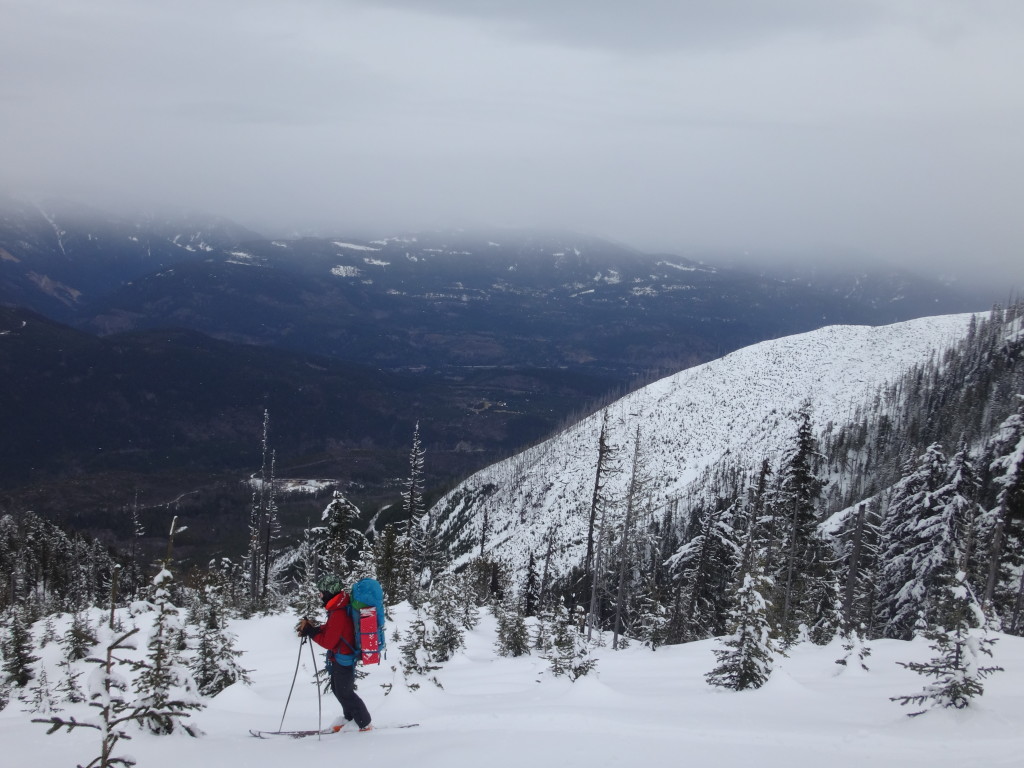 Looking back down into the valley.

One Response to An ascent of the Nipple