After waking up at the obscenely early time of 5:30am on a Saturday, I made my way to the bus stop, hopped on to the first bus that came by and struggled not to fall asleep as I made my way to Phibb’s Exchange, where our group was meeting to catch the first bus out to Deep Cove at 7:17am. By some stroke of luck, everyone showed up on time and we all ran onto that first bus just in time.

We arrived at the Baden-Powell trailhead around 7:45am and started the hike to Quarry Rock, where we took some sweet pictures of the fog over the water. It was raining a fair amount at that point, but we all dealt with it just fine. There was an obvious divide in skills level of the group and I was at the back. Seeing as this was labelled a “beginner friendly” trip, I didn’t think much of it. 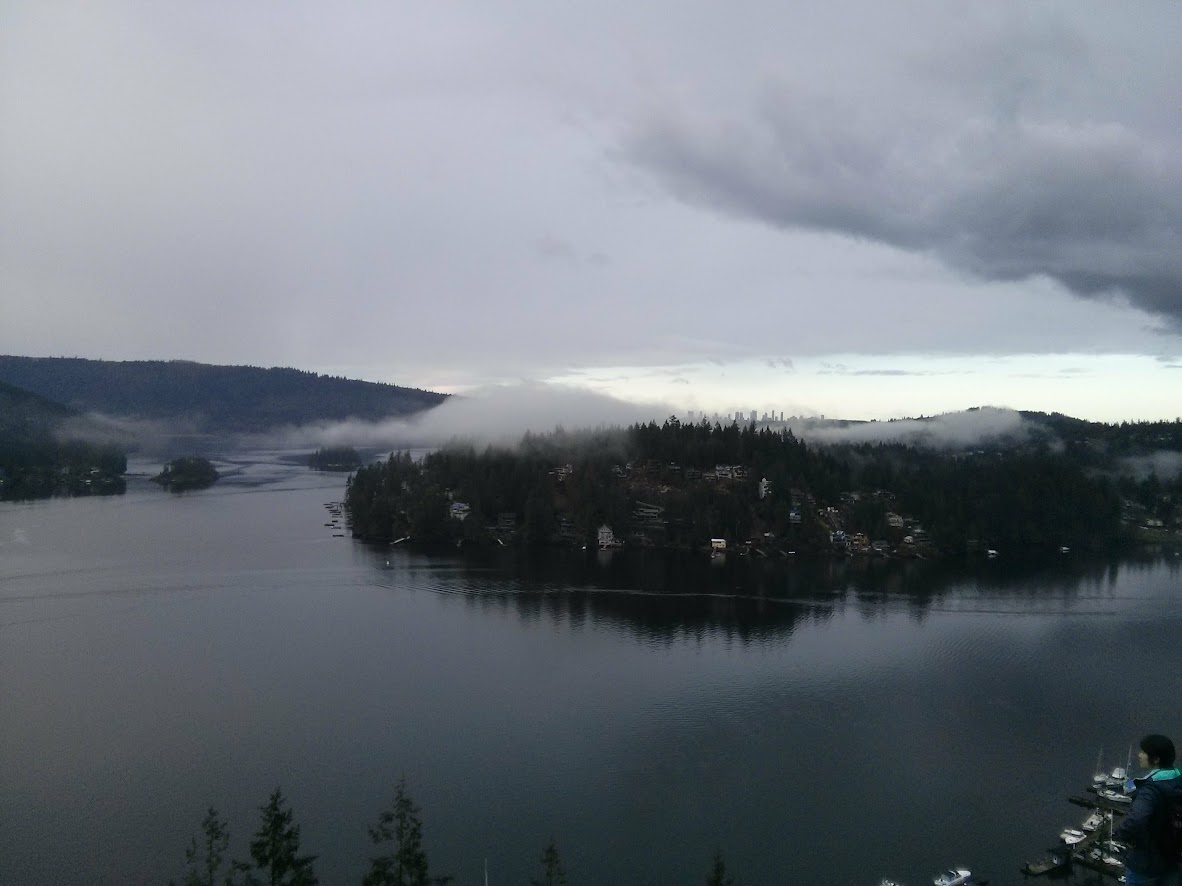 The view from Quarry Rock

We continued the hike, making our way to the Lynn Canyon Suspension Bridge. I was silently struggling the whole way. We got to the bridge around lunch, and as the weather had cleared up to be a beautiful day, it was teeming with people who obviously had driven up, not laboriously hiked their way in. Looking (and probably smelling) wet and kind of gross, we nabbed a picnic table outside for lunch, sharing delicious snacks in a potluck style. Andrew brought home-made brownies and they were delicious. Megan’s banana chips were also pretty rad. 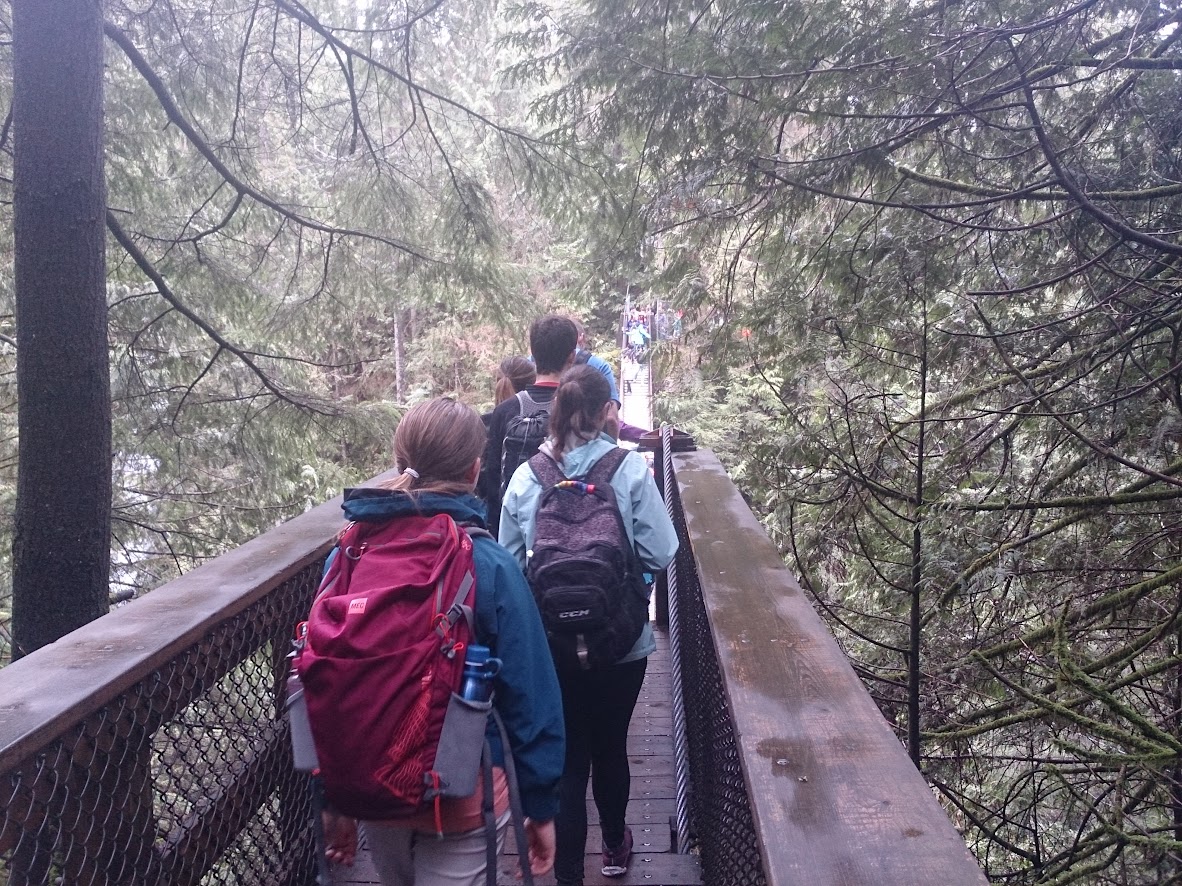 So at this point, we’d been hiking for about 4 hours, covered about 15 km hiking (we added a few extra to the expected 12 km because we got lost at one point), taken what seemed to be 1000 stairs, and we’d just eaten lunch. Tired, sleepy, and with a very full belly, I had to push on.  Maybe it was my lack of fitness that made the next part so hard or maybe it was the fact that my calves are screwed up from an injury a few year ago, but boy-oh-boy, I was regretting coming on this trip. Regardless, I quickly found out that the first part of the hike was nothing in comparison to the rest. It started with stairs, and then continued with stairs, and when I’d thought the stairs were over, there were even more stairs. I don’t know how many stairs I climbed that day, but it would make the wreck beach stairs look meek in comparison. 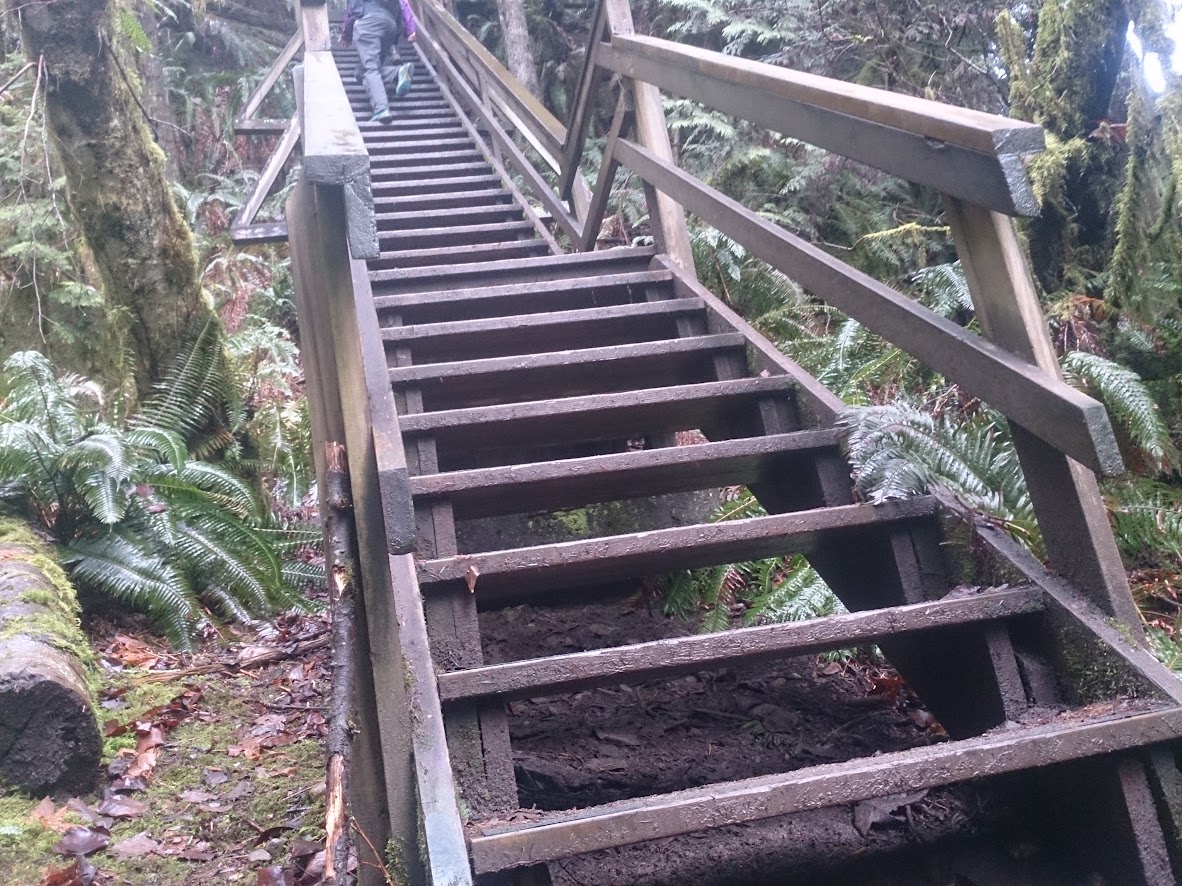 After another 3 or so hours of hiking (climbing stairs), we reached a signpost that said we were 0.7km from the bus station at the base of Grouse Mountain. Everyone got excited, as I wasn’t the only one who’s legs were burning at this point. We hiked for another half hour or so, saw another sign that said 0.7km from the bus station, and kept going. At this point, no one was really speaking because everyone was tired and confused by the signs that were making it seem like we were in some parallel universe where we kept looping back to some beginning point at that 0.7km sign. We decided to take a break on the trail and as we’re sitting there, I shift my position, my backpack tilts a little and rolls a bit down the hill. I think it’s fine, the backpack will stop. Nope. My backpack goes tumbling down the steep, forested hill and I’m sitting, waiting for it to finally stop. A good 70 meters down it gets caught by a fallen tree and I make my way down to retrieve it. 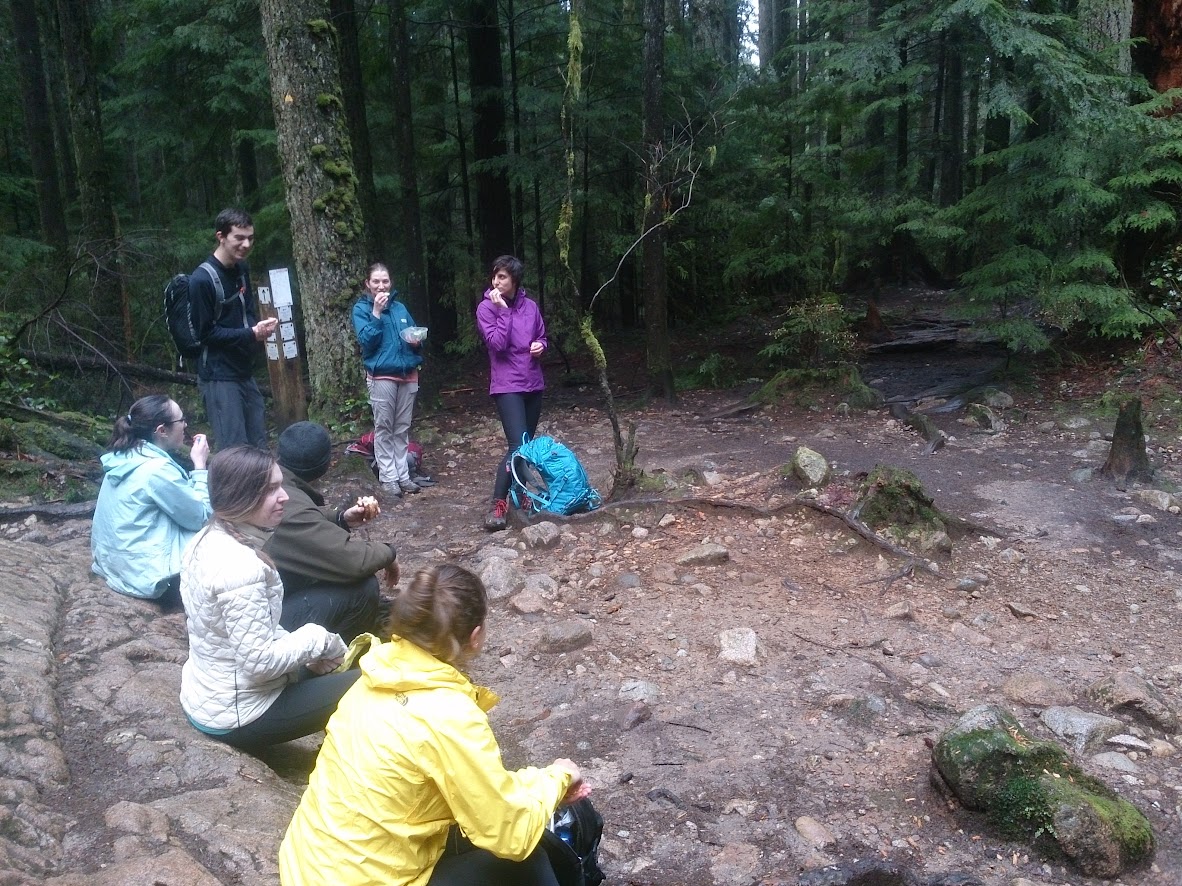 I finally manage to haul my ass back up to the trail and everyone cheered (which I’ll admit was a nice boost), and we continued walking on that strange 0.7km loop to get to the bus stop. Another 0.7km sign post later and  it seems like we must be getting close. At some point one of the 0.7km posts must actually mean 0.7 km, right? Finally, this one was actually correct. We hiked another 30 minutes or so and, by the same stroke of luck we had in the morning, get on the bus just as it’s about to leave. We took the sea bus into down town (yay for my first time taking the sea bus!) and began to part ways.

My legs felt like jello and I was dreading having to do Storm the Wall the next day, but looking back, it was a great trip. The people were great, the conversations were great, the snacks were great, even the stairs were kind of okay. 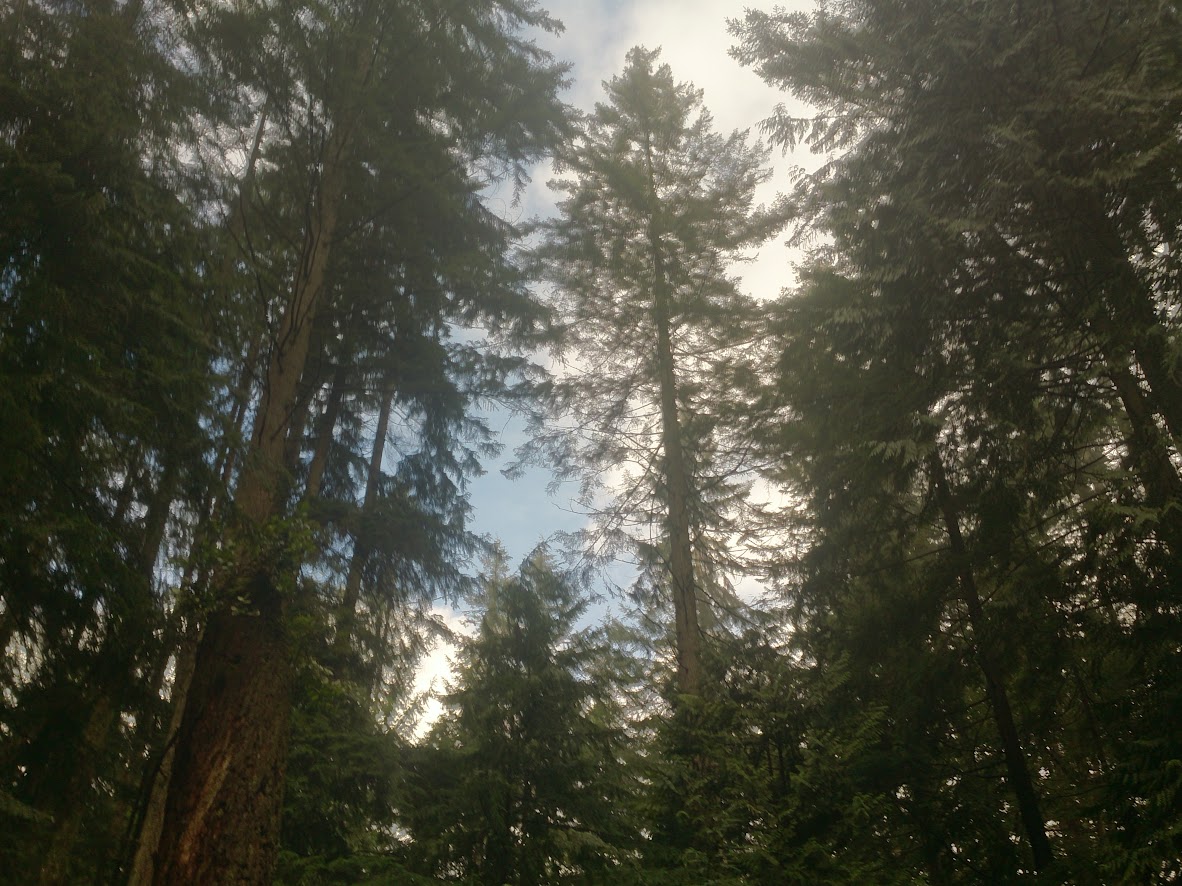 Some pretty trees and sky. Not sure at what point this photo was taken, but it feels appropriate for an end of report photo. Photo: Matthew Palmer

One Response to Stairs: An account of the Baden Powell Trail