Posted on April 6, 2017 by Christian Veenstra

Nick: “My butt hurts”. Me: “There’s a reason for that – it’s because you’ve been able to sit down”. We joked as we strapped our skis back onto our bikes for the last time, just before sunset outside the “Crazy Raven” pub up at Cypress Resort. Having just skied down from the top of the Sky Chair we’d nearly completed our mission – skiing down from the highest lift at all 3 North Shore ski resorts under our own power – and were still on a bit of a high (thanks, Piotr, for giving us the idea by pulling off this trip yourself years ago). We just had to bike back to our homes near Vancouver City hall.

Earlier that day, just before sunrise at 6:22 am, we’d strapped skis to our bikes for the first time and left for Mt. Seymour. Almost exactly 2 hours later we’d arrived at the top of the Mt. Seymour carpark. As we took a break to fill up on water and transition to skis we discussed how it didn’t actually take that much longer to get to the backcountry access point than by car, especially if we had had to park in the lower parking lot. Just under 3 hours from my house and we’d skinned to the top of Brockton Chair. Fortunately the icy patches we’d found on the road on the way up had had a chance to melt out, but I was still shivering as we coasted back down the long hill. GPS says we topped out at around 40km/h skiing and 50km/h biking.

Unloading the skis at Mt. Seymour. Note the vertical ski-carry (Nick’s idea); it’s so much more comfortable than the classic along-the-top-tube knee-destroying method.

Then, it was over to Mountain Highway to head up the backside of Grouse. This is where things got difficult for me. You see, my ride is a single-speed road bike. After starting a family I downsized my bike fleet – it’s the only one I have. I’ve got a 60 tooth chainring (well, beltring – I’ve discovered that, while expensive, belts last longer than chains and are worth it overall), 24 tooth sprocket, and 170 mm crank arms. With my 23×700 tires the overall gain ratio is about 4.9 (pedal travel to road travel). If you’ve got a “regular” mtb with 26″ wheels, 175 mm cranks, and a triple crankset this is probably equivalent to about your 3rd or 4th highest gear. I use it for commuting, every day, and I love it. You don’t think about what gear you’re in – you just pedal – and it never skips (although every once and a while it does break). If there’s a hill you just power through. I tow my daughter around in the chariot no problem. But Mountain Highway is steep, and long (and I’d already climbed Seymour). Basically, I was pushing as hard as I could the whole way and still had to make “switchbacks” by weaving back and forth on the road to make it up. Fortunately, when it becomes gravel, the grade also eases off a bit.

We passed a variety of mountain bikers on the way up, all of whom seemed amused by our road-oriented bikes and skis. Eventually there started to be snow on the sides of the road and it was clear that something had been doing some clearing on the road. But it had done a pretty half-assed job – there was still snow and icy ruts everywhere, and it had occasionally scooped up parts of the road along with the snow. It was difficult riding to say the least. “What cleared this – an excavator, who was only clearing well enough that excavators could make it?” I wondered. Soon enough we arrived at the excavator in question, and the road was snow covered beyond it. We skated. I went back for my forgotten climbing skins. Eventually we reached Grouse and skinned up beside the runs arriving right below the “Eye of Storm” or whatever they call that giant windmill. We skinned over to the top of the lifts, took a selfie, and got told by the lift operator that we couldn’t be there. I tried to point out that, if they didn’t want skiers or hikers coming up their private road, then their sign should mention that (it only mentions no motorized access or mountain bikes). But he’s just doing his job, and we agreed to go back the way we came (which was obviously the plan anyway). Next time I’ll just go to the windmill and call it good. On the ski back to the bikes we saw a roadie carrying his bike over the snow past the excavator, keen to make it all the way to the resort, presumably doing his own triple crown. 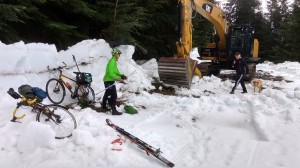 The excavator at the top of Mountain Highway.

Biking down the gravel road was… interesting… we went slow, to avoid pinch-flats with our bald little tires, and swapped the lead with a trail runner who was also heading down. We’d pass her when it was smooth, and get passed again when it was rough. I contemplated putting a Voile strap on my brakes so I could use a different hand position, as my hands were getting pretty beat up from all this standing. Eventually we ditched the road and took one of the MTB trails off the side – “Bobsled” – which was way more fun. Somehow I neither of us got a flat or blew a spoke, although I did need to adjust my brake pads for wear.

We initially attempted to save elevation by “contouring” west through North Van. Ha! After a brief side-trip up Dempsey we abandoned the idea and just went all the way back down to Marine Drive. We tried heading up 21st, through the new survey, and got onto Cypress Bowl Road via Folkestone and Chippendale Road. It was steep, and there was excess elevation gain. More switchbacks for me. Next time I’d go back to my “regular” route via Westmount past the gas station; that’s the route we took back down. By the time we got to the top of Cypress I was exhausted and had blisters on my hands – I’d been standing on my pedals basically all day, and rarely had a chance to sit down. Nick, by comparison, made it look easy. It was such a relief to lock the bikes and start skinning again, up the backside of Strachan. Despite regular cycling all my strength training is skiing-oriented, and all the standing to pedal had really taken its toll.

At the top of the highest lift at Seymour, Grouse, and Cypress resorts.

After tagging the summit and skiing down in the fading light we biked back to my house near Vancouver City Hall. We arrived just after dark, our total time was 14h 15m. Total distance was 149 km, and total elevation gain somewhere between 4400m (Nick’s Strava, which didn’t get a lock until halfway through town) and 4700m (my GPS, with 1 minute smoothing and pinning the elevation to the map). I was way more tired than after my 4000m / 7h10m worth of (skin/ski) training-laps on Hollyburn a few weeks ago. Days later my forearms still ache from pulling up so hard on the handlebars for so long. On Monday my drivetrain felt a little funny and made a new noise. I thought my pedal or bottom bracket bearings were shot (again), but couldn’t quite pin it down. Tuesday, while commuting to work, everything “slipped” – or at least gave me the same feeling it usually does when I start ripping the teeth off my belt – and I couldn’t pedal forwards anymore. On further investigation my cog had ripped itself a ~6 mm groove through the splines on my hub’s driveshell. Although I didn’t know it at the time, it had just barely made it through the trip. Although I love my single speed I think there are times in every man’s life when having gears would have been a good idea. 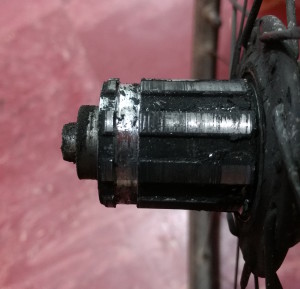 Chris King Carnage. Yes, the groove is where my cog was.