We were at the Brandywine trailhead eating breakfast when we noticed that the tailpipe was under the front tire. I thought about the odds of exactly that happening and concluded that it was fairly special. 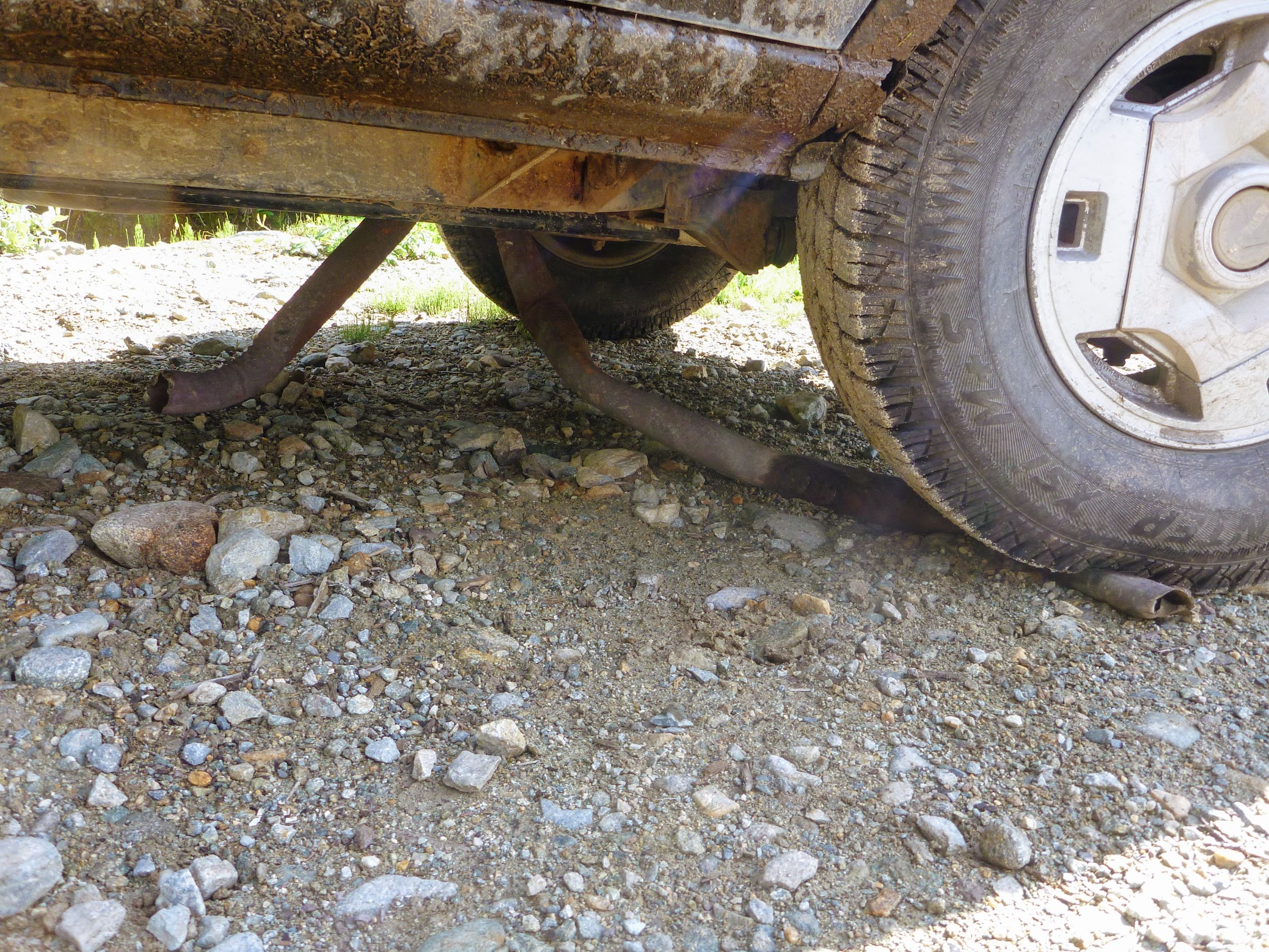 This dude on an ATV with a dog in a Rubbermaid tub showed up. We exchanged pleasantries and then he noticed the tailpipe.

“No, it’s wedged safely under the tire. It’s not going anywhere.”

I wasn’t able to determine if he thought I was just too catastrophically not funny or whether I was just nuts, but he ceased talking with me and eventually left.

We were heading up with the intention of getting some turns in and going somewhere at least sort of new but didn’t have anything specific in mind. 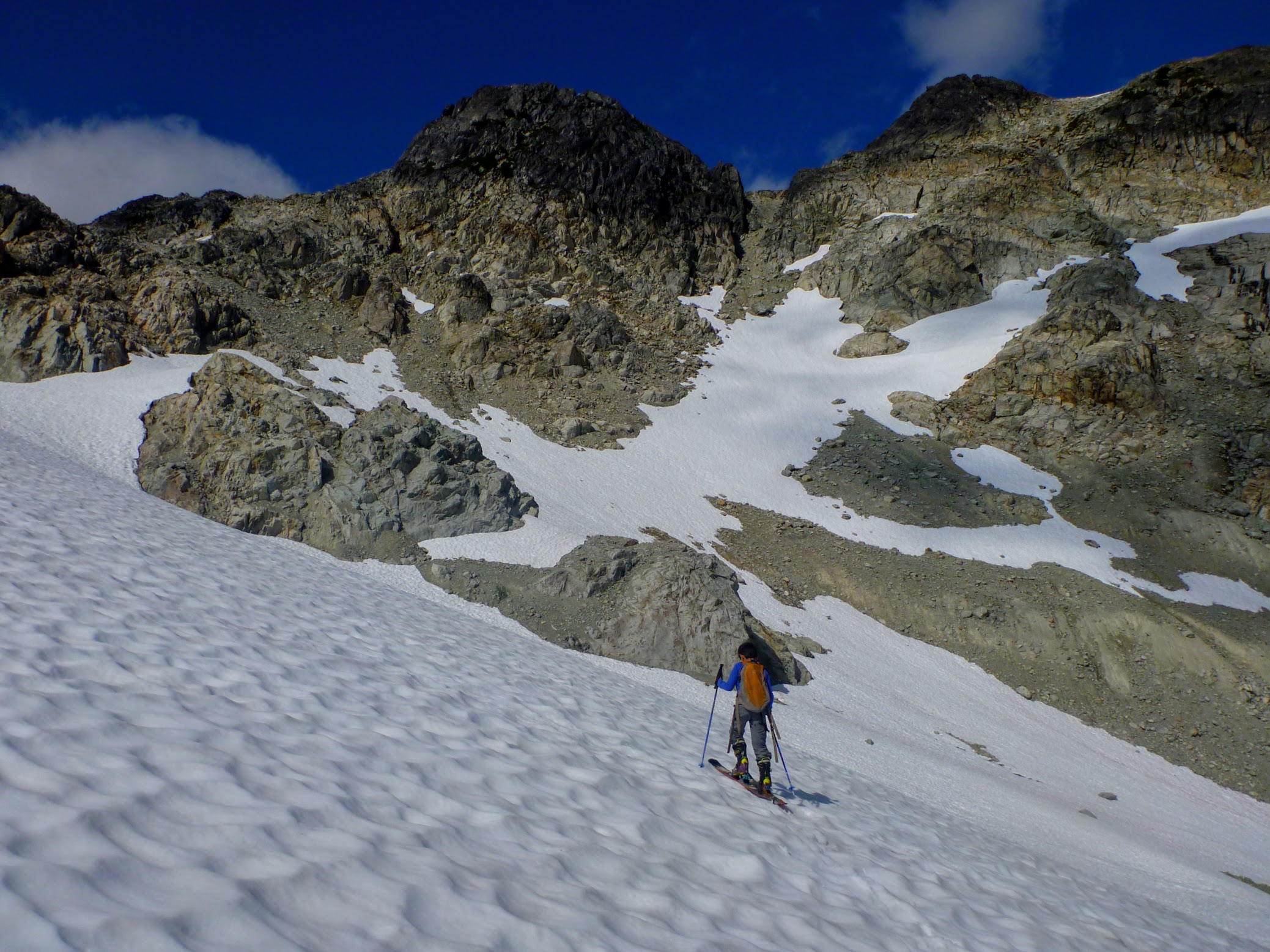 Cognac Peak and the gully

We ended up skinning up the gully between Cognac and Grand Marnier (one to the right and two to the right of Brandywine, respectively). Earlier I’d told Devlin that it was up to him whether we summited anything or not. I tried to pitch going up Cognac.

“Why are you forcing me to summit?”

“I’m not forcing you. I think you’ll be happier tomorrow if you do, but ultimately it’s up to you.”

“Fine. Whatever you want.”

“You totally don’t have to.”

“We’ll go, because it’s ONLY because you made me think about.”

I couldn’t help but smile at the ridiculousness and Devlin saw it.

“Why do you have that evil grin on your face? Is that because you tricked me into going to the summit?”

From where we were continuing up, the gully was clearly going to get us to the top, but it looked like a tedious slog up scree, so we headed to our left and tried to go up directly. This seemed to be the right decision until it wasn’t anymore. 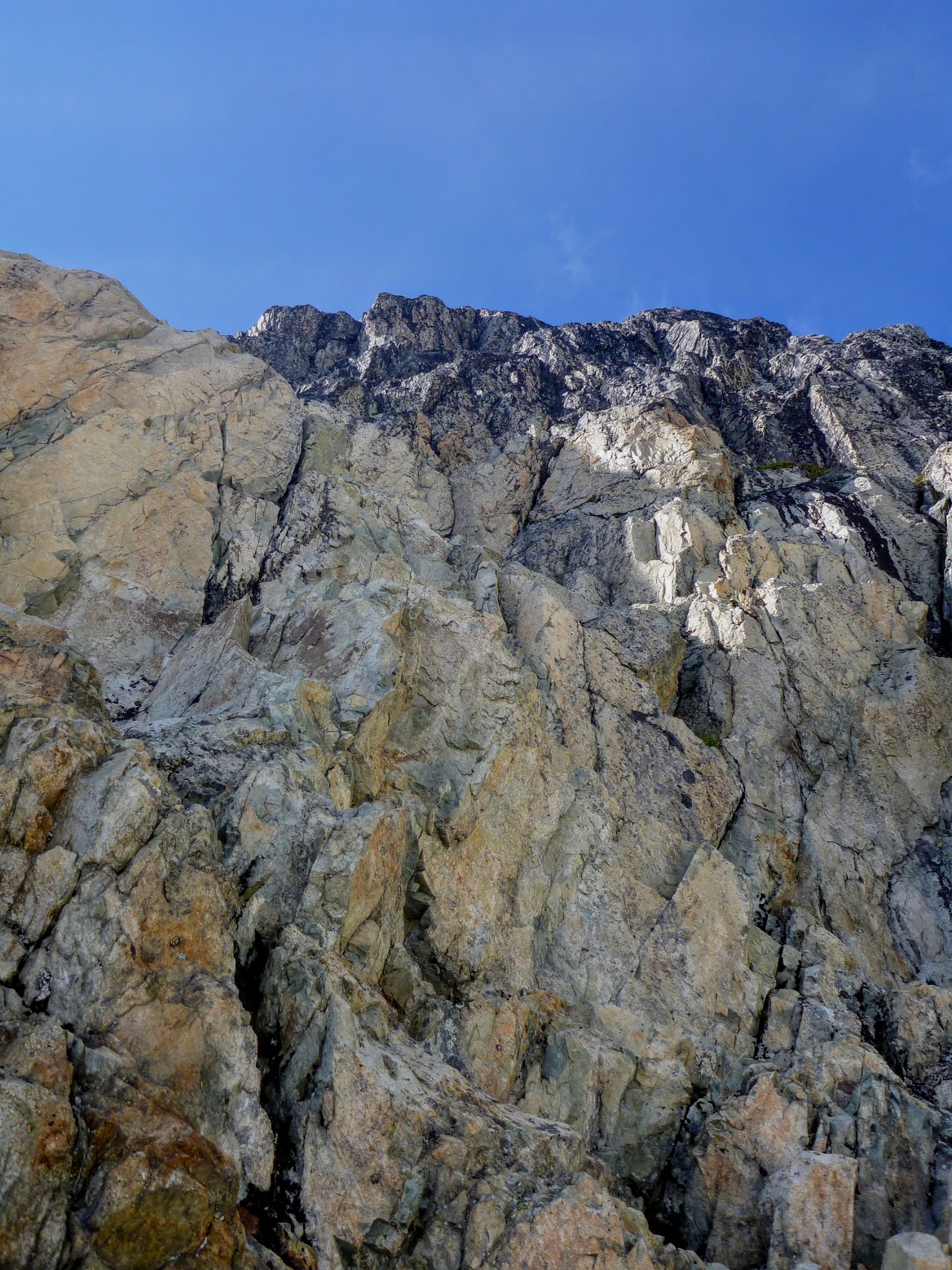 This is where we were defeated

We farted around trying to get around a little cliff band and then decided it was really late and started heading back. 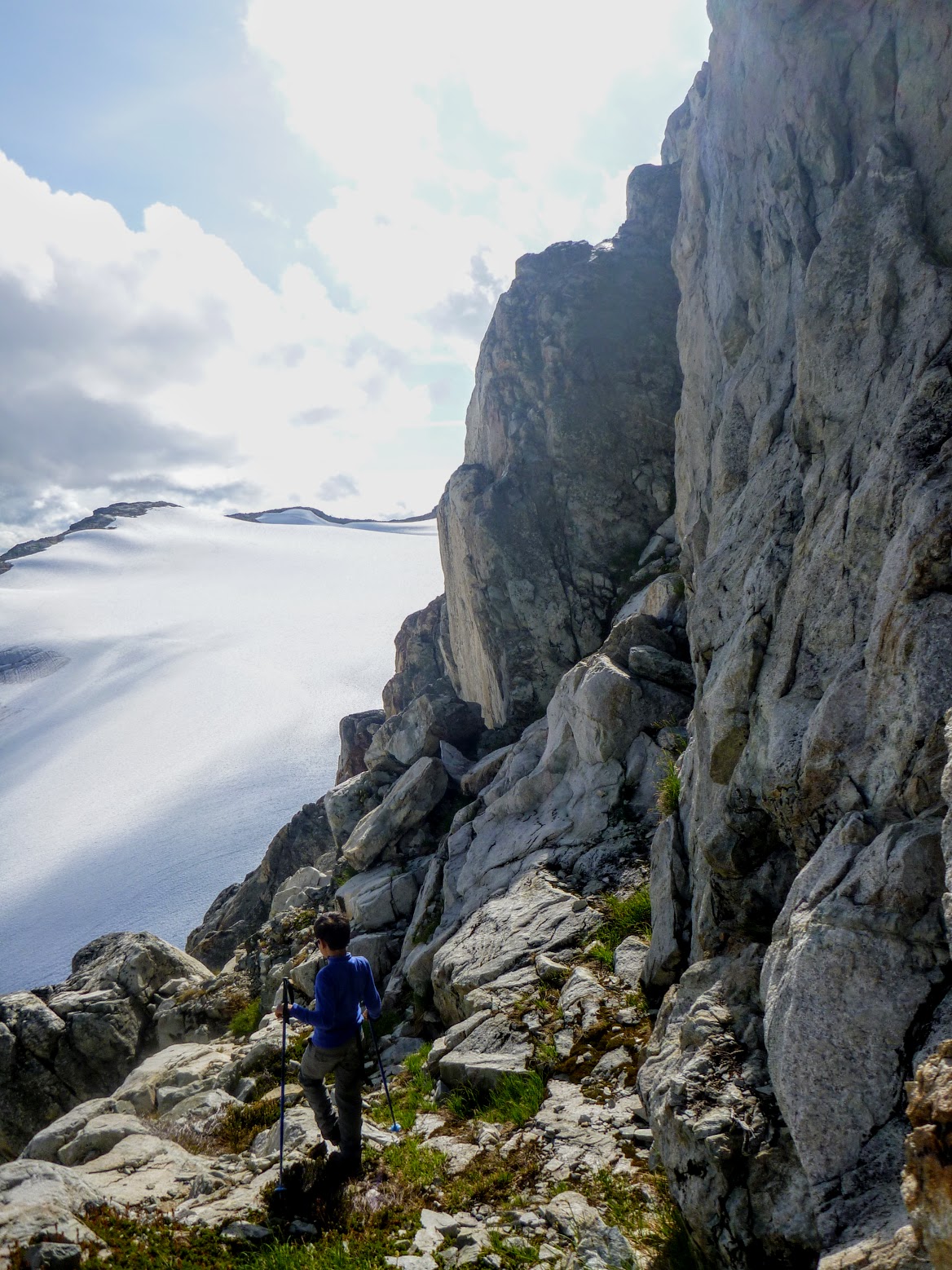 Tail between our legs

When we got back to the snow and started getting our skis on, I mentioned to Devlin that there was some chance that I was just going to pop out on the first turn. Last month my old boots finally died; the mechanism that locked them into downhill mode was hidden inside the boot shell and thoroughly broken, so it was beyond repair. I’d ordered a pair of Atomic Backlands (Devlin has the women’s version because it comes in smaller sizes and they’re amazing. So light. So stiff in downhill mode. So much motion in hike.) and because I’m a dumb guy I waited until the night before to adjust the bindings to the new boots. The Backlands have a super-short sole because they removed most of the heel and toe lugs to save weight. I needed to move the heel in 27 mm, and there wasn’t enough travel in the bindings. I ended up just moving them up as far as I could, which engaged the heel but not by nearly as much as it should have. Good enough for August turns, I thought.

Devlin went down first and I took a few pictures. 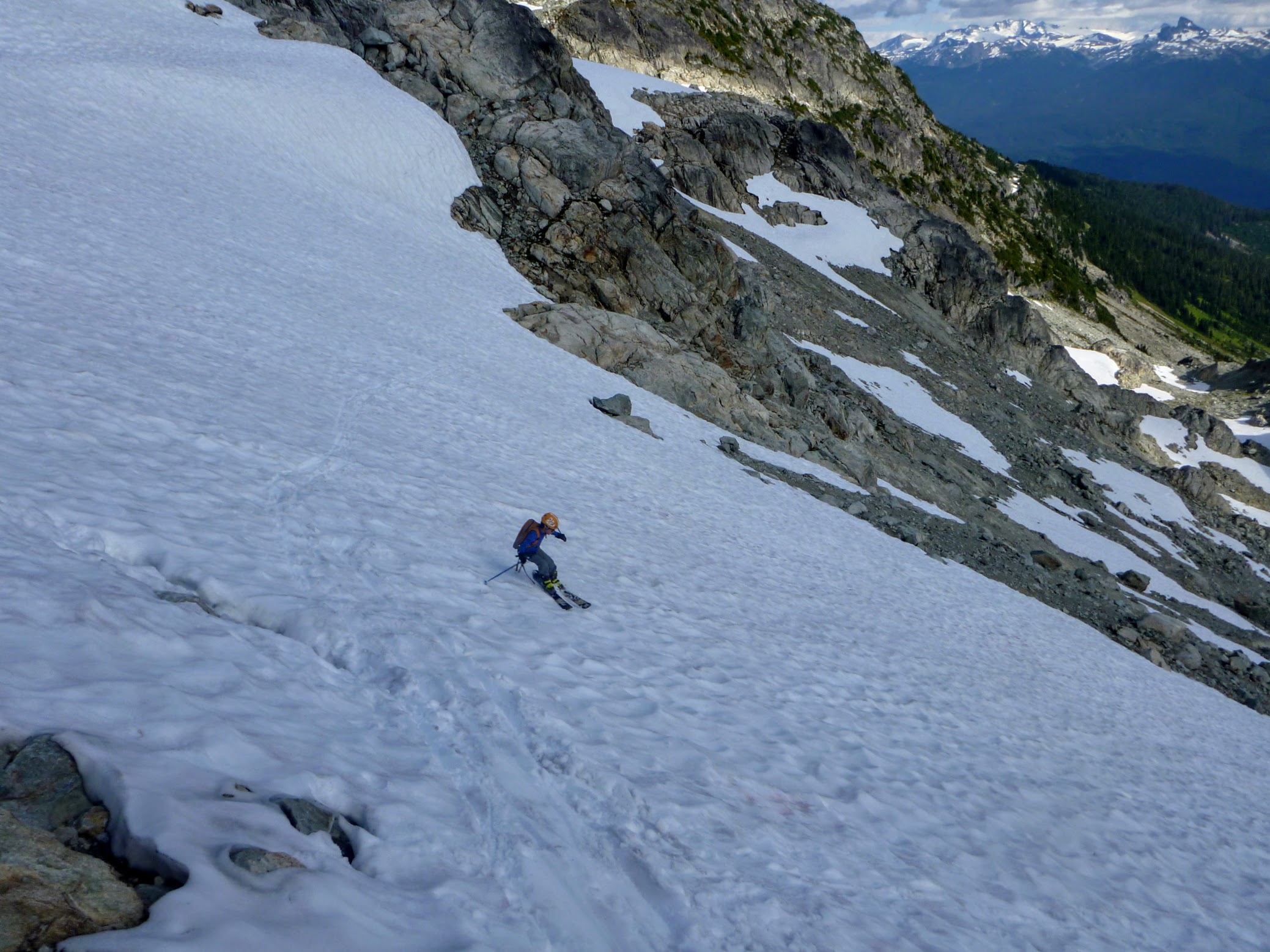 I double-ejected as soon as I thought about making my first turn. It was by no means amazingly steep, but it was pretty slippery; the edges of the sun cups were too soft to provide much resistance, but just below the surface it got firm quickly.

When you practise self-arresting, you do it on your stomach, on your back, head first and feet first. I think this is basically useless, because most of the time I need to self-arrest I’ve got a big pack on, which makes me slide on my side facing downhill.

I was on my left side, so I grabbed my right wrist with my left hand and followed my pole strap to the pole, slid down onto the basket and firmly planted the tip of my pole on my left side, just like in the textbooks. Because I was sliding sideways, I slid on top of and over my pole, which pulled my arm underneath me, pranged my shoulder a bit and put me into a roll, just like in the textbooks.

When I stopped rolling I could see that I was approaching a band of rocks.

My first self-arrest attempt relieved me of my right pole. I spent some time trying to grab it again before I figured out I no longer had it. I repeated the pole-grabbing procedure with the remaining pole and was totally ready to plant the pole tip if the snow was above me.

I pulled the pole firmly against my big fat belly with my upper hand and planted the handle with my lower hand. This was the ticket; I stopped shortly afterwards. 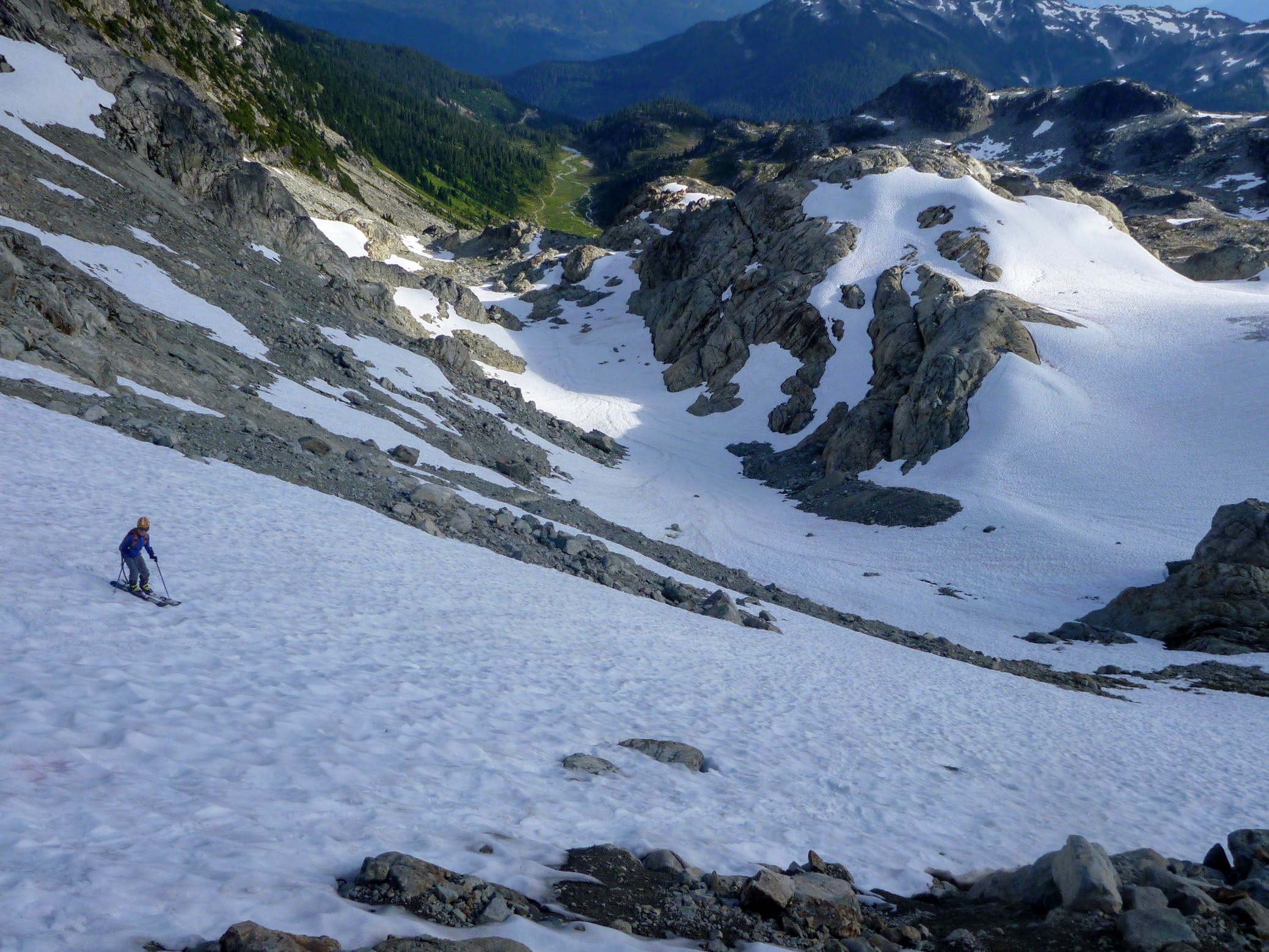 The total length of the slide was from where I took the above picture to between the two bands of rocks. I missed the first band by a reasonable margin. 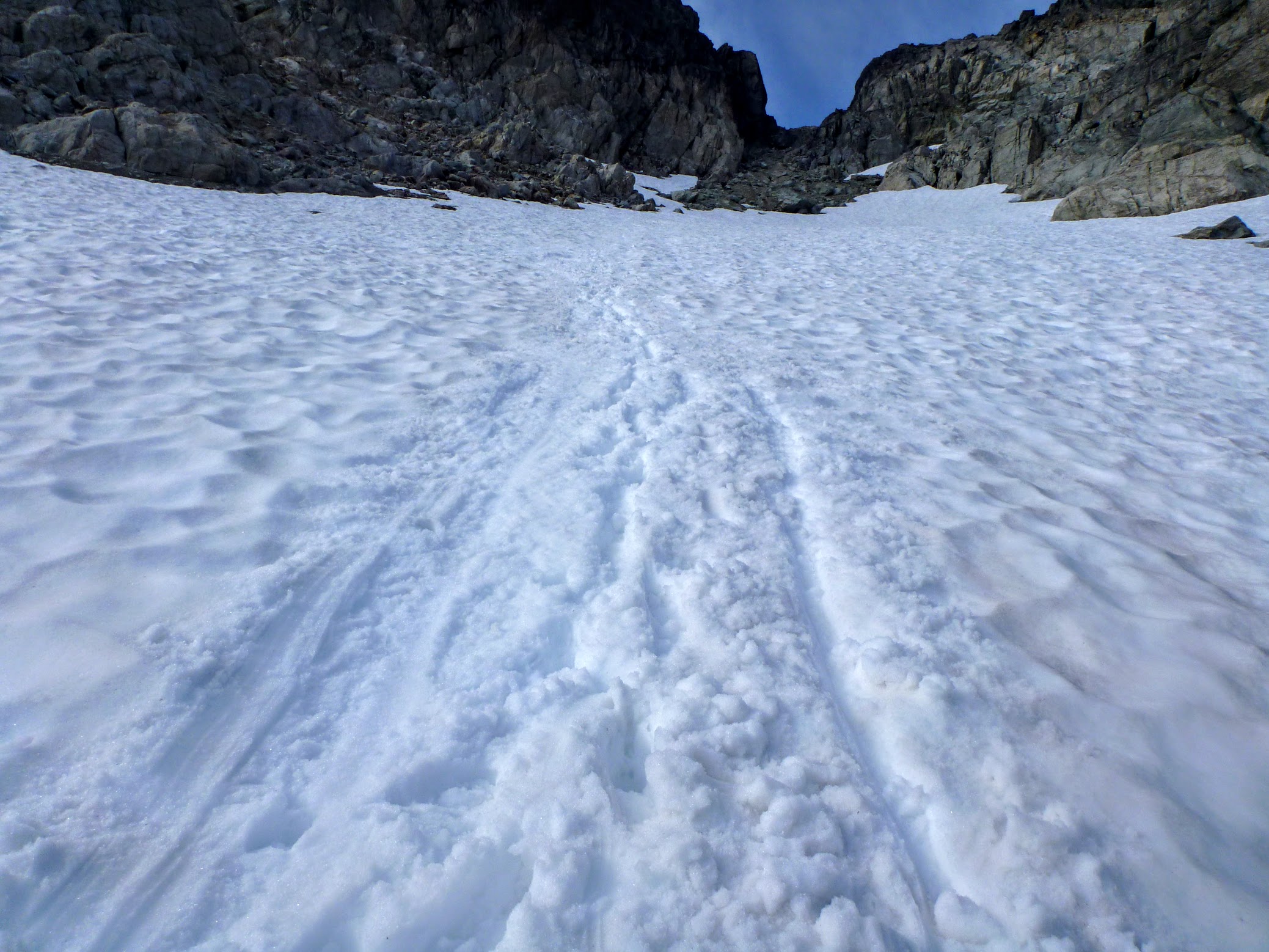 A contour line or two

There’s some morals here. An obvious one is that I’m a dumbass and that I should have looked into the binding adjustment at least a couple days before so that I could remount the binding if I had to, and that I just shouldn’t have gone at all if I couldn’t make things right. There’s also helmets. You never know when you’re going to be sliding towards a band of rocks, so helmets are never a bad idea. At the speed I was going a helmet would have been the difference between a bunch of scrapes and bruises and rolling the dice with a concussion. For the record, my helmet was on; that’s one thing I did right.

There’s a few different points to think about with regards to self-arrest. One is that the range of conditions where self-arrest works at all is fairly slim. Most of the time you either stop without trying or you can’t self arrest at all, so it’s always worth thinking about what happens if you do fall. If you’re in the range of conditions where you could self-arrest if you’d practised but haven’t and you’re heading towards some rocks, though, you probably don’t feel so great about your choices, especially if you don’t have a helmet on. Practising self-arrest with a big stupid pack is also something to think about. It’s definitely going to make you much more capable at self-arresting with a big stupid pack, but it’s also going to make you much more likely to injure yourself practising self arrest.

When we got back down to the car, I successfully re-attached the tailpipe to the vehicle with Voile straps. 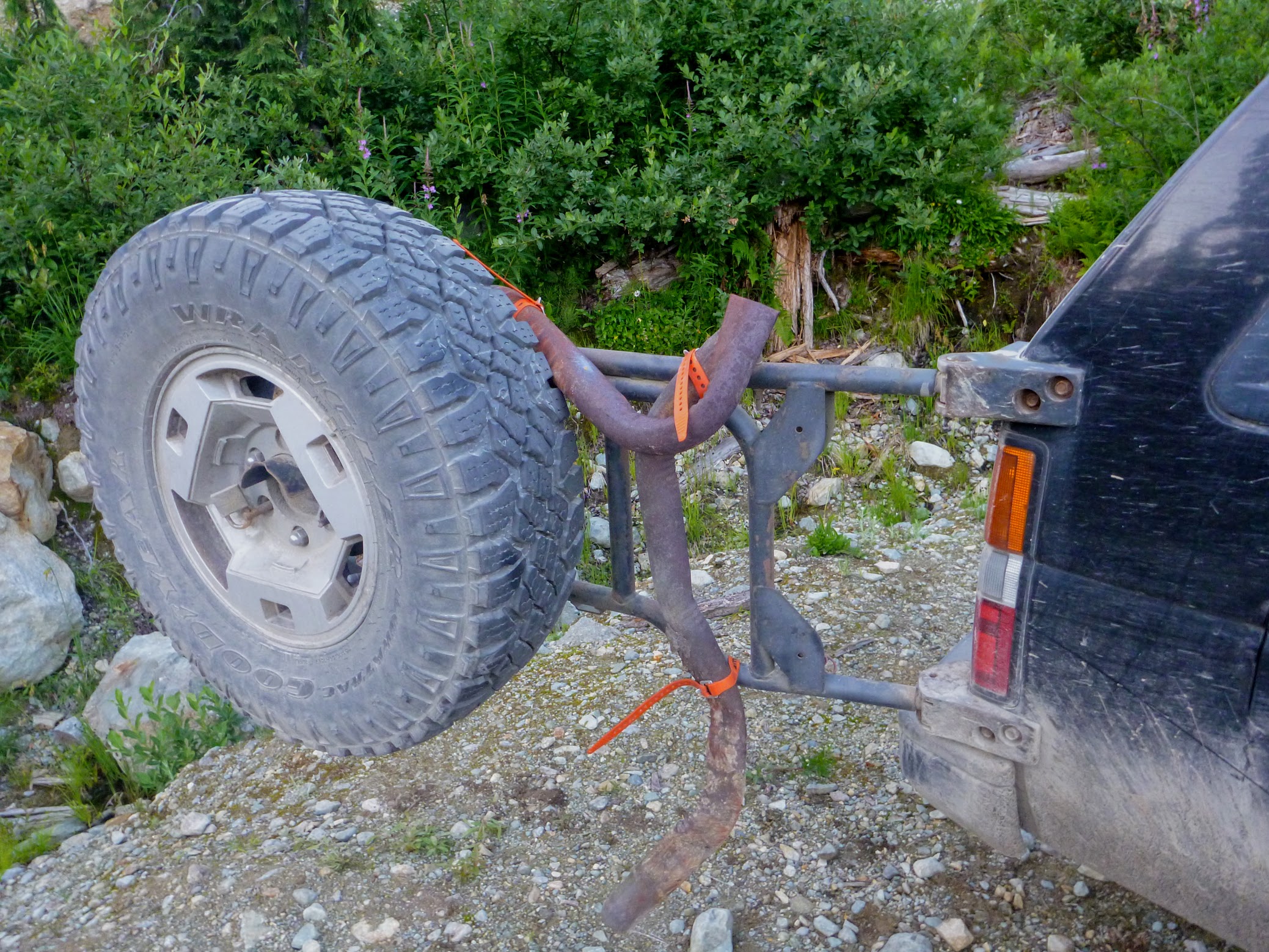 This entry was posted in Ski, Trip Reports and tagged Brandywine, ski, Snow. Bookmark the permalink.