Executive Summary: The bridge, plywood, and door were all delivered by helicopter. Chain saw was hauled up and left at the hut. The bridge was assembled. The load of garbage was flown out. The old bridge was not flown out as it might have taken half an hour to disassemble it and at $40 per minute for the helicopter, that’s $1200, so we’ll get it, maybe, in a few years, next time we have a helicopter up there. What remains to be done on the next trip: Brushing out ca 300m of trail to the new bridge. Installing the plywood floor in the hut. Installing the new door. Cutting firewood.

Mostly this was a very busy trip and I don’t even know the stories from the rented flat bed truck or Luka’s Subaru, but here’s what I saw. 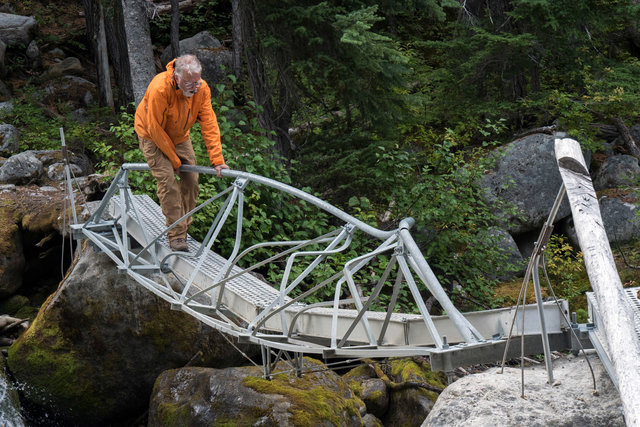 One of our objectives was to replace the old bridge which was in rough shape.

Thursday: Jeff arrived on the 6:15pm flight from Alberta, picked up Devlin (who is nine years old) and brought him to my house, then loaded the plywood and door onto his truck and disappeared into the night.

Friday morning, rather early, we gathered up Devlin, Julien, Lea, Josi into the Jeep and we were driving just after 6 am. Past Pemberton, Devlin got a bit carsick on the dirt road but we were to expect this. At the trail head we packed all sorts of stuff. Lea and Julien were carrying huge packs with things like chain saws, gas, loppers, ice axes, crampons. Our job was to clear some brush on the trail and get Julien, Lea, Devlin to the hut before dark. Josi and I chose to stop for the night at the Fork, and the others made it to the Hut before dark. 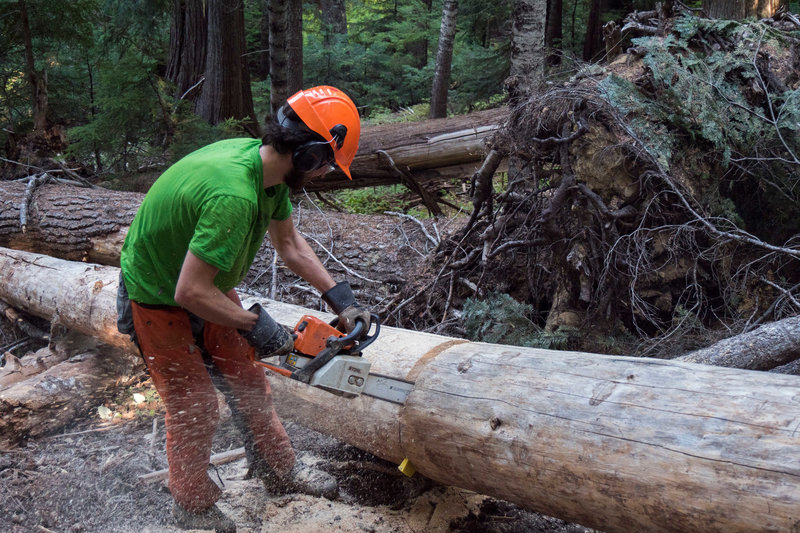 Julien found it was difficult  to haul a heavy pack and still clear the fallen logs. 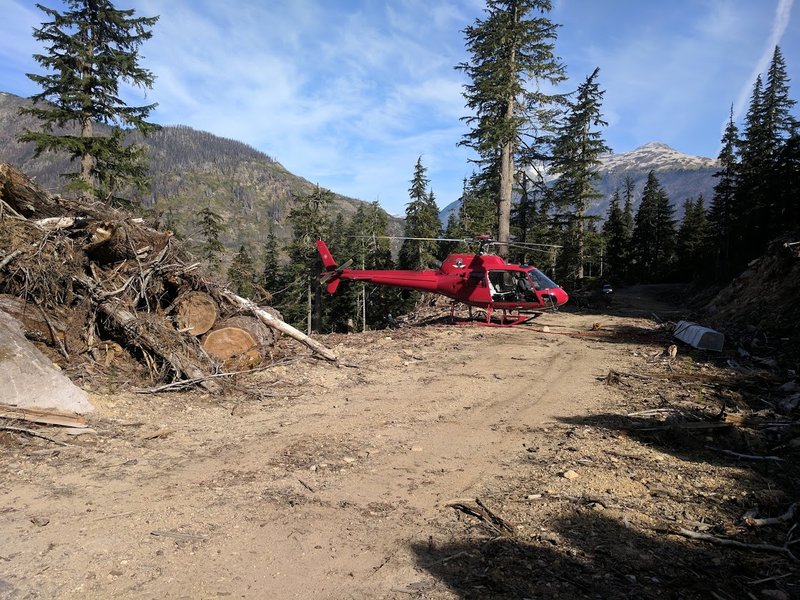 The Helicopter, which can lift over 1200 lbs

Saturday Josi and I realised that we would have to hurry to get to the bridge site ahead of the helicopter, so we left our overnight stuff at the Fork. We got to the bridge site just as the helicopter arrived and with Jeff on the radio and Devlin watching from a safe distance, we watched the helicopter lower the bridge segment into the river, then one end into the river, then parallel to the river, finally not really where we wanted it but close enough. The second bridge segment arrived all too soon, and we did a better job of placing it, but we needed the Tirfor to get the two segments onto their foundations, so Jeff radioed down to the crew at the flat bed, to bring up the Tirfor, which we estimated would take five hours of hiking. Josi and I determined that we were useless for at least 5 hours, so we headed back to the Fork, then the hot springs, where we joined the usual crowd of Weekend Warriors in the water. 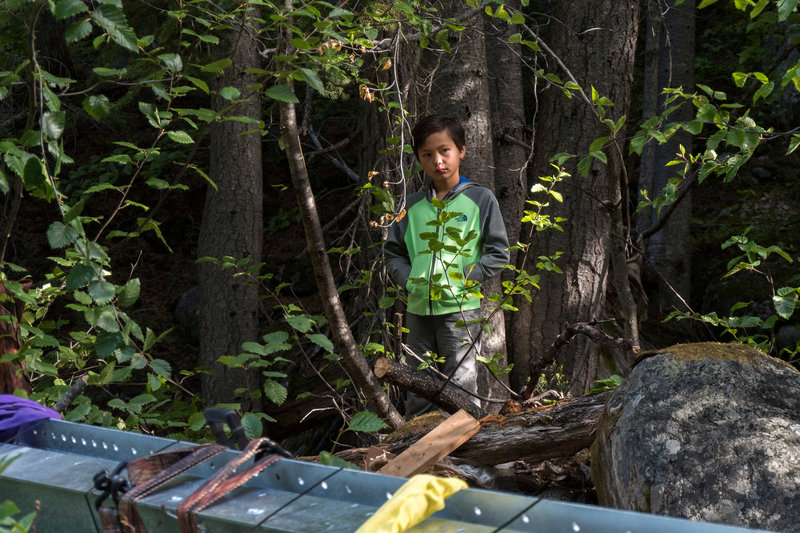 Devlin supervising from a safe distance 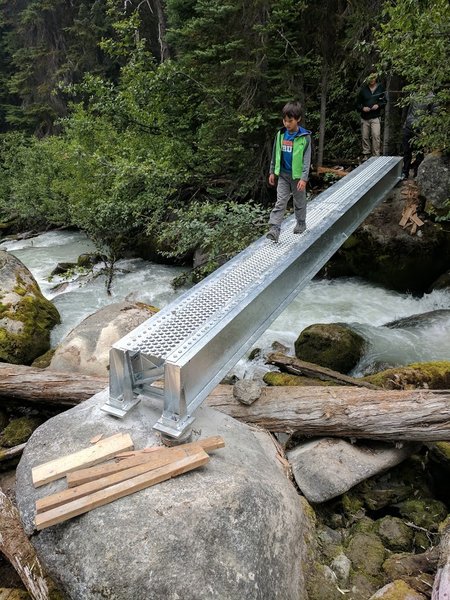 Meanwhile, Jeff and Crew put the new bridge together, and a lovely bridge it is.

Sunday a storm was coming in, and blasting on the new road shattered the solitude a few times. Josi calculated how long she could stay in the hot spring before hiking down, without getting rained on. We got back to the Jeep just as the rain got serious, started the engine and turned on the heater. The other passengers in the Jeep arrived about an hour later and they were soaked thoroughly. The ride to Vancouver was mostly uneventful.

Jeff Mottershed did an incredible amount of work to make this all possible. The Club could never afford to hire somebody to do the work he has done. Let’s just make sure that the Club reimburses him for his expenses.  He was left with returning the net to the helicopter pilot, getting rid of the garbage, returning the rented flat bed truck. 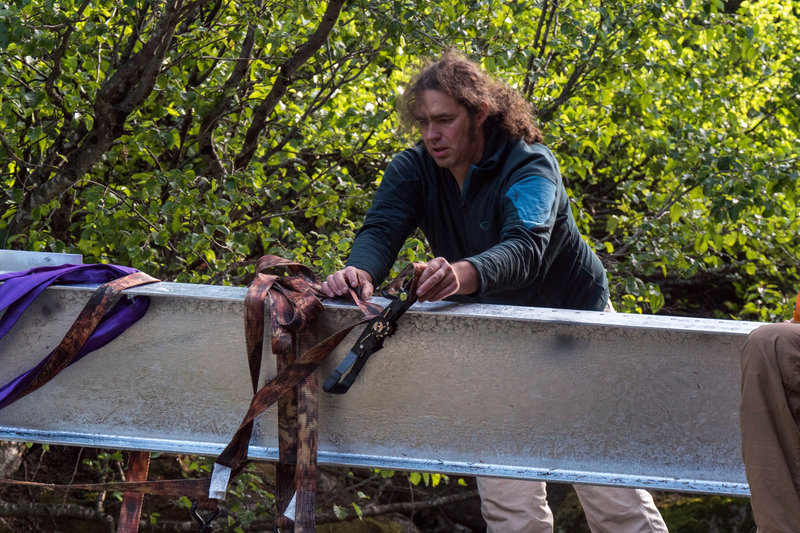 Jeff untangling the rigging as the next load approaches.

For our work the next weekend, where we installed the new door and floor in the hut, see