Jake Jones and I became best buds and regular adventure buddies during his time on exchange at UBC. Sadly, he had returned to Manchester to finish his degree. When Nicole Barrette and I received the Neil Mackenzie Adventure Grant and I knew I was headed for Europe,  Jake and I made plans to meet up 5 weeks earlier and decided to explore the Dolomites in Italy and Triglav National Park in Slovenia. With my bag packed for climbing, mountaineering and via ferrata, I was on my way to a best buds reunion!

Jake and I met in Venice, Italy on June 30th, 2017, where he was on a family vacation. After a wonderful day of exploring the “City of Bridges”, we rented a small car and headed to the beautiful mountain town of Cortina. Cortina has a few campsites to choose from: approximately 3 to the south and one to the north. They charge by the number of cars, tents and people, and typically were about 21 euros per night for Jake and myself, one tent and one car. Not as cheap as we were hoping, but cheaper than other accommodation. We stayed in Campsite Dolomiti, which was slightly further from the main road, but had the most trees and therefore the most relaxing environment. It also had numerous rooms to hang out in, including one with ping pong tables and another with a lovely kitchen area where we could cook.

Because I had never done via ferrata before, and because the weather forecast called for an afternoon thunderstorm, we began our journey on a relatively short, easy via ferrata: Col dei bos; Degli Alpini (summit 2559 m; 509 m gain). Via ferratas tend to be a step above scrambling and a step below climbing, where there are thick metal wires that are connected to the rock via deep metal rods. The via ferrata gear has two carabiners connected to bungee-like fabric that is connected to your harness. As you ascend, you switch one carabiner at a time and ensure that each is closed fully before moving the other above the next metal rod. Metal rods are typically 1-4 meters apart. If you fall, you fall to the last metal rod. The guidebook that we used for this trip was pretty good (“The Dolomites: Rock Climbs and Via Ferrata”, by James Rushforth), and despite being published in 2014, we would discover many times that it contained out of date information.

On our approach, we passed ruins of an old hospital from the war which were quite beautiful! I felt confident using the via ferrata gear rather quickly, but it took a little while getting over the fear of slipping, especially because I was in my hiking boots that had lost nearly all of their soles (i.e. had no grip), and the climbing was at least 5.4 in difficulty. The via ferrata set-up can only take one fall before the gear must be retired, and they are not cheap, so that was also on my mind. For the rest of the trip, I used my mountaineering boots instead with much better success and comfort! After our descent, we hiked towards Cinque Torre as the thunderstorm rolled in.

Read the rest of my trip report on my blog here… 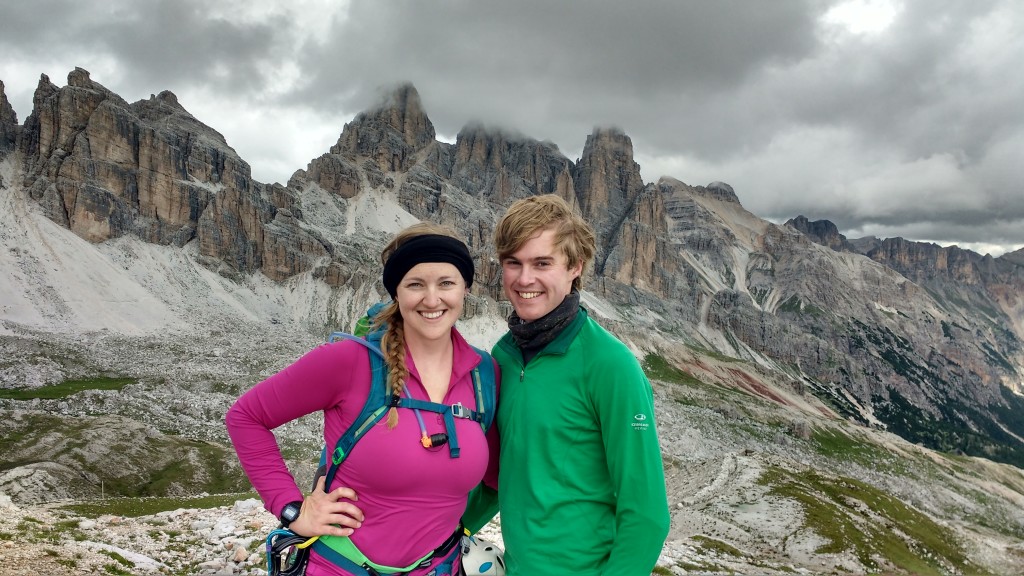 This entry was posted in Climb, Hike, Other, Trip Reports and tagged climbing, Dolomites, hiking, Italy, via ferrata. Bookmark the permalink.