On June 17 we set out to Burton Hut. We went on the Rubble Creek Trail. Garibaldi Lake was melted out, so we had to do the dumbest trip ever. We first went on Taylor Meadows. We could see the Black Tusk sticking out. We got to Mimulus and Black Tusk Lake. The lakes were frozen at the middle part. There was glacial flour in the water on the edge where the lakes were melted. Helm Creek was below us when we were on the lateral moraine leading onto Helm Glacier. We did a climb onto Gentian Ridge. It was getting dark. We skied down to Gentian Pass. We saw tons of wolverine tracks. At one point we ran out of snow and took our skis off. There was horrible dead fall everywhere and it was getting pretty steep. When we arrived at shore we couldn’t see the hut. We started walking south until we saw a little reflector and found Burton Hut at 12:30 am. 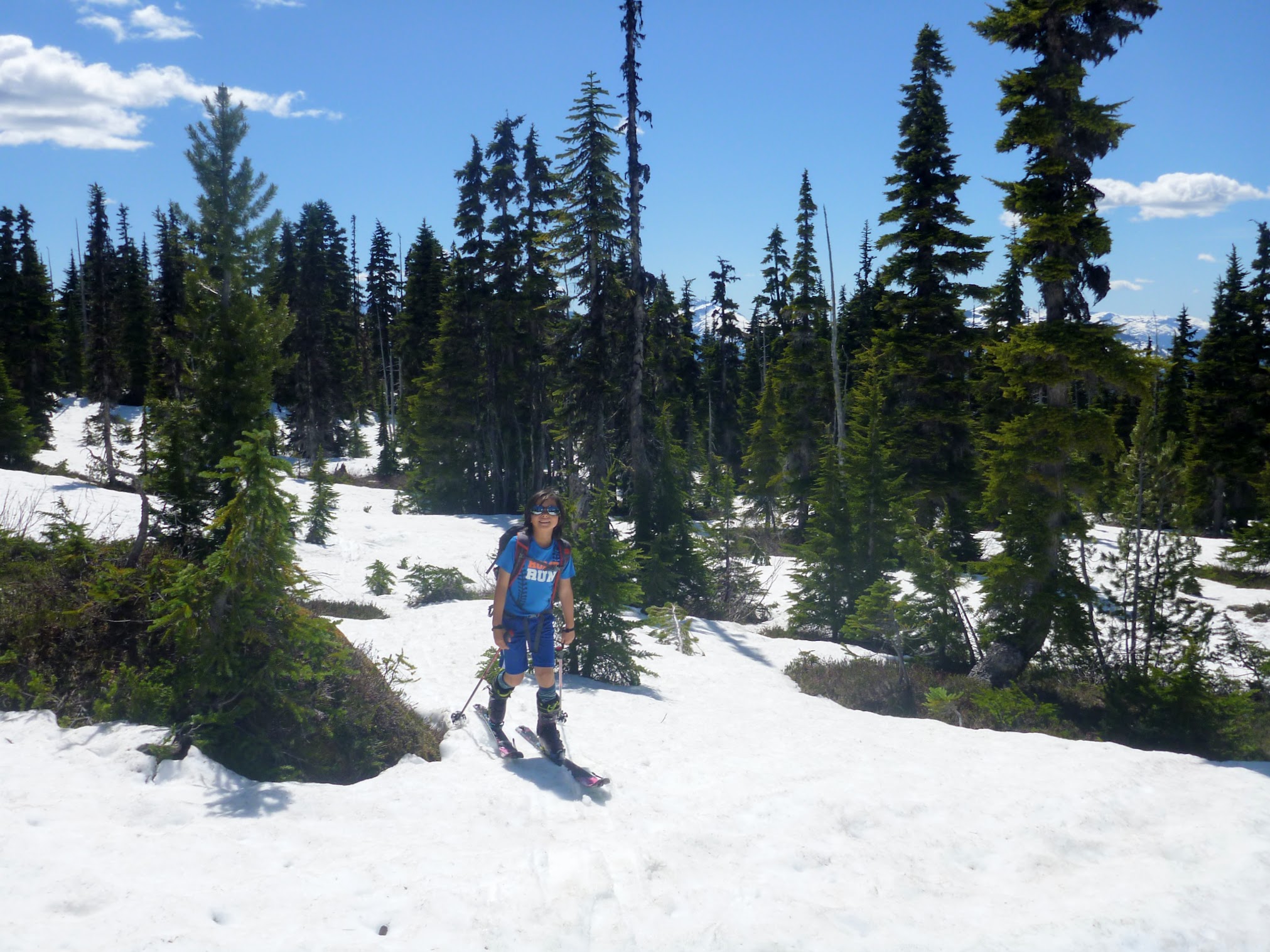 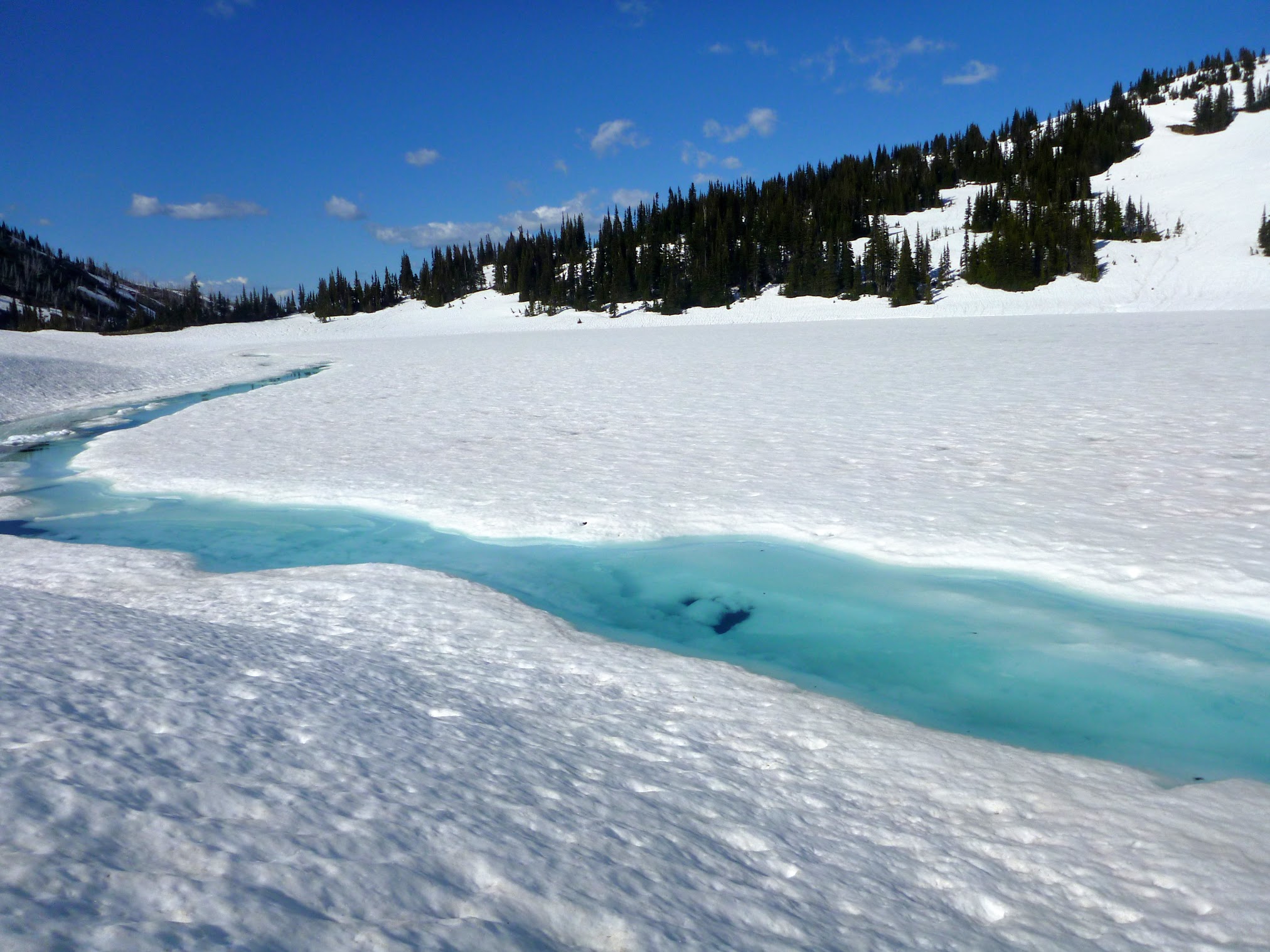 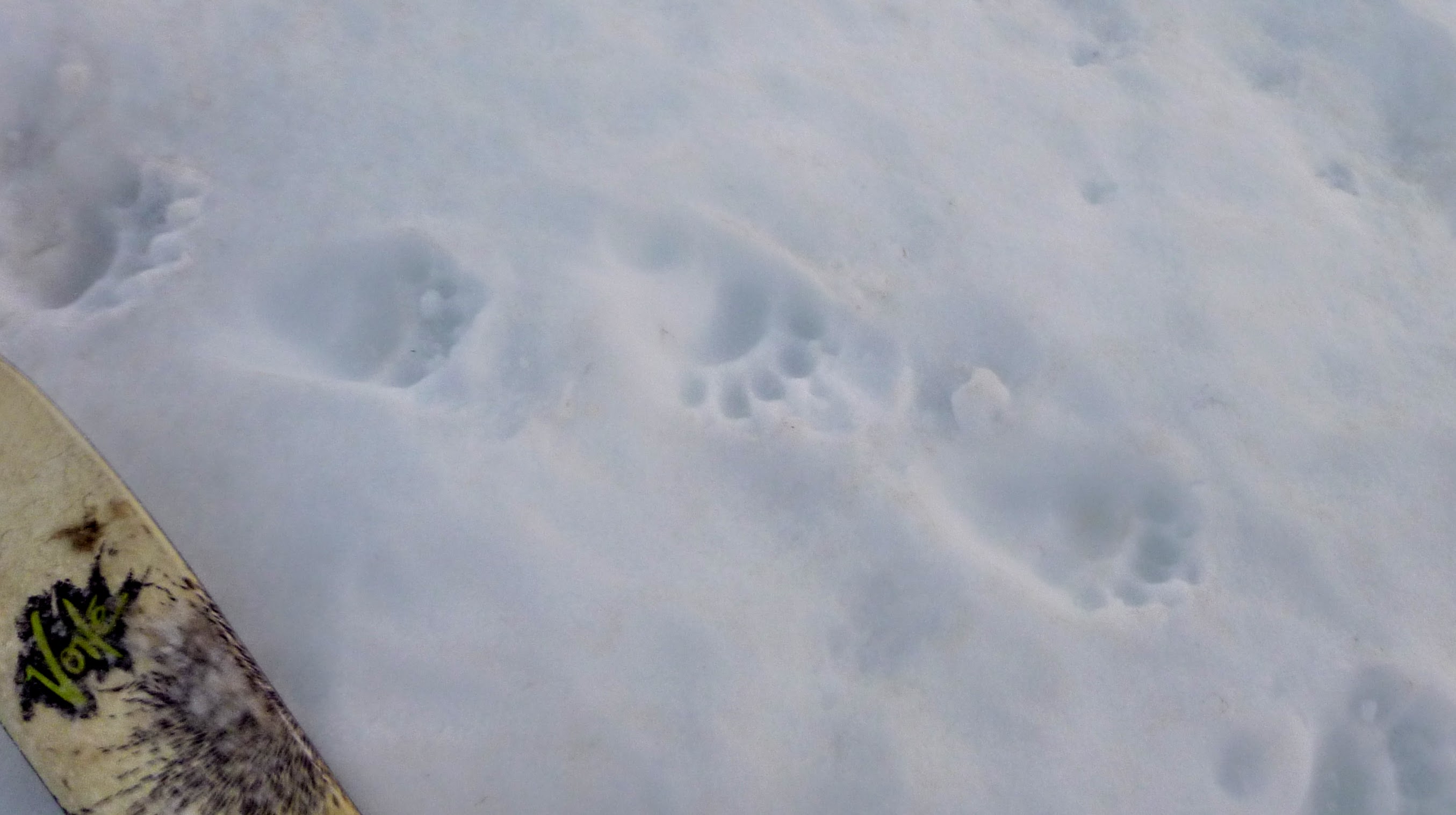 10 years ago my dad made money boxes for all the other VOC huts. My dad didn’t make one for Burton Hut because we didn’t get permission from Garibaldi Park. This year, the executive finally got permission to install a money box, so we made one.

At the hut, my dad used a power drill to drill into a rafter. Then he put Loctite onto the studs and put them through the rafter. Finally, he used nuts to put the box onto the studs. 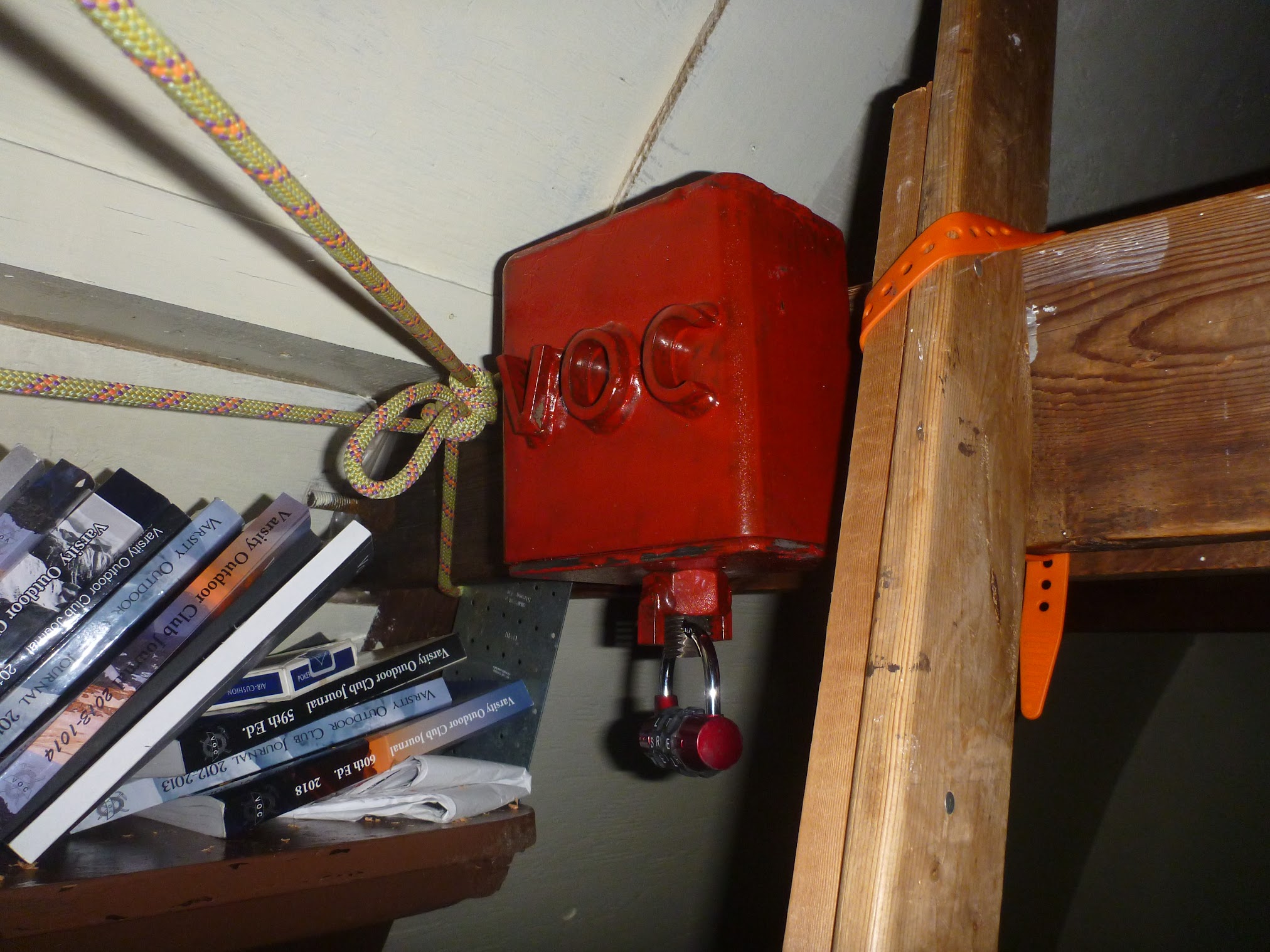 When my dad looked on the shelf he pulled out a jar that had a pickled cobra eating a scorpion. I liked the pickled cobra. I think it should stay at the hut. 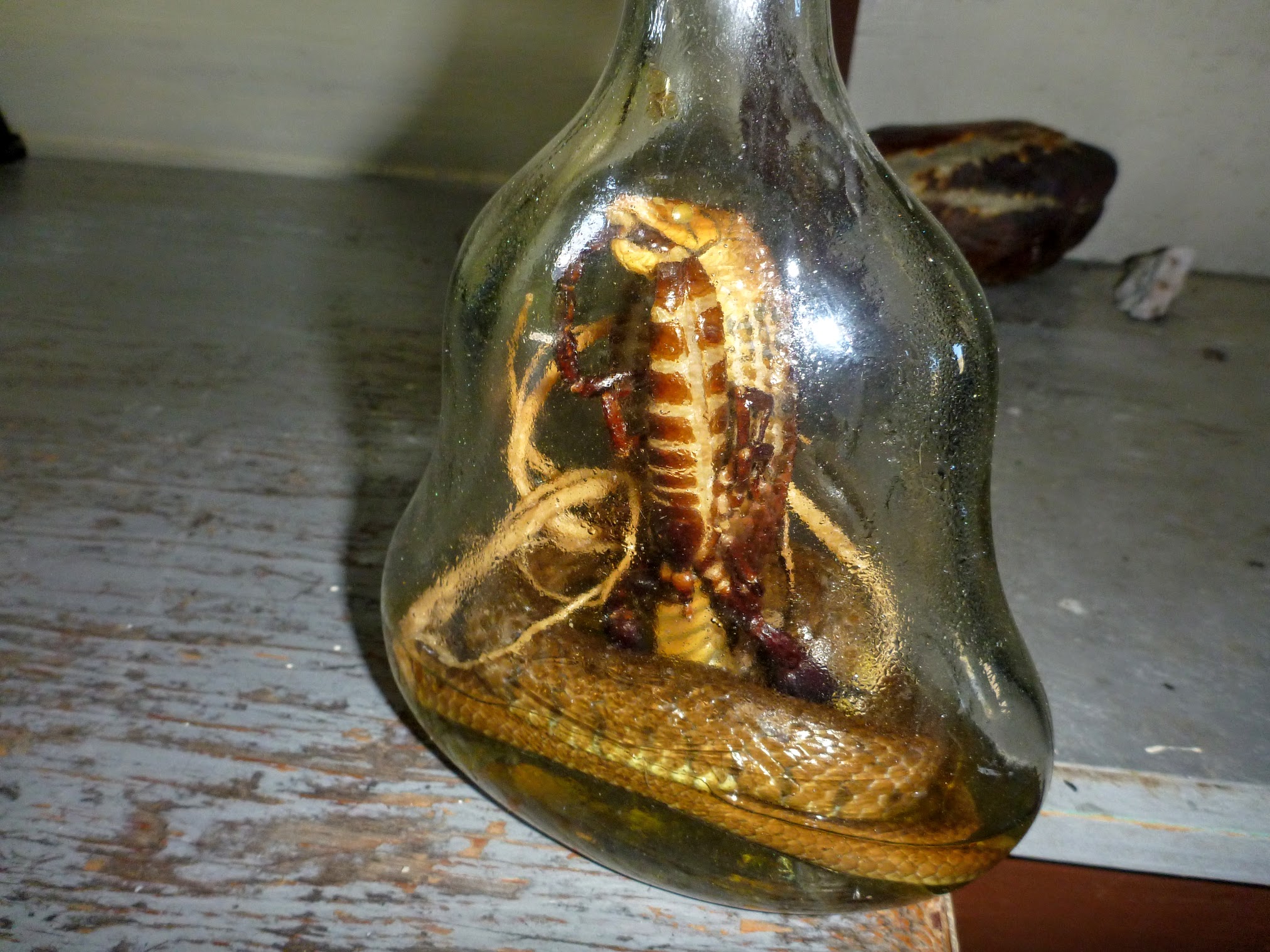 After our night in the hut, we didn’t want to have to redo the dead fall going up, so we tried to go around the trees. We were trying to cross Polemonium Ridge. What we thought was Polemonium was actually just some random talus ridge, which we were disappointed to find out. After we got over it we thought we saw the actual Polemonium Ridge. We went up another talus slope and when we looked back later we found out it was the col between Castle Towers and Polemonium Peak. It was 5:45 pm when we were in the col. It was much higher than we intended to go. 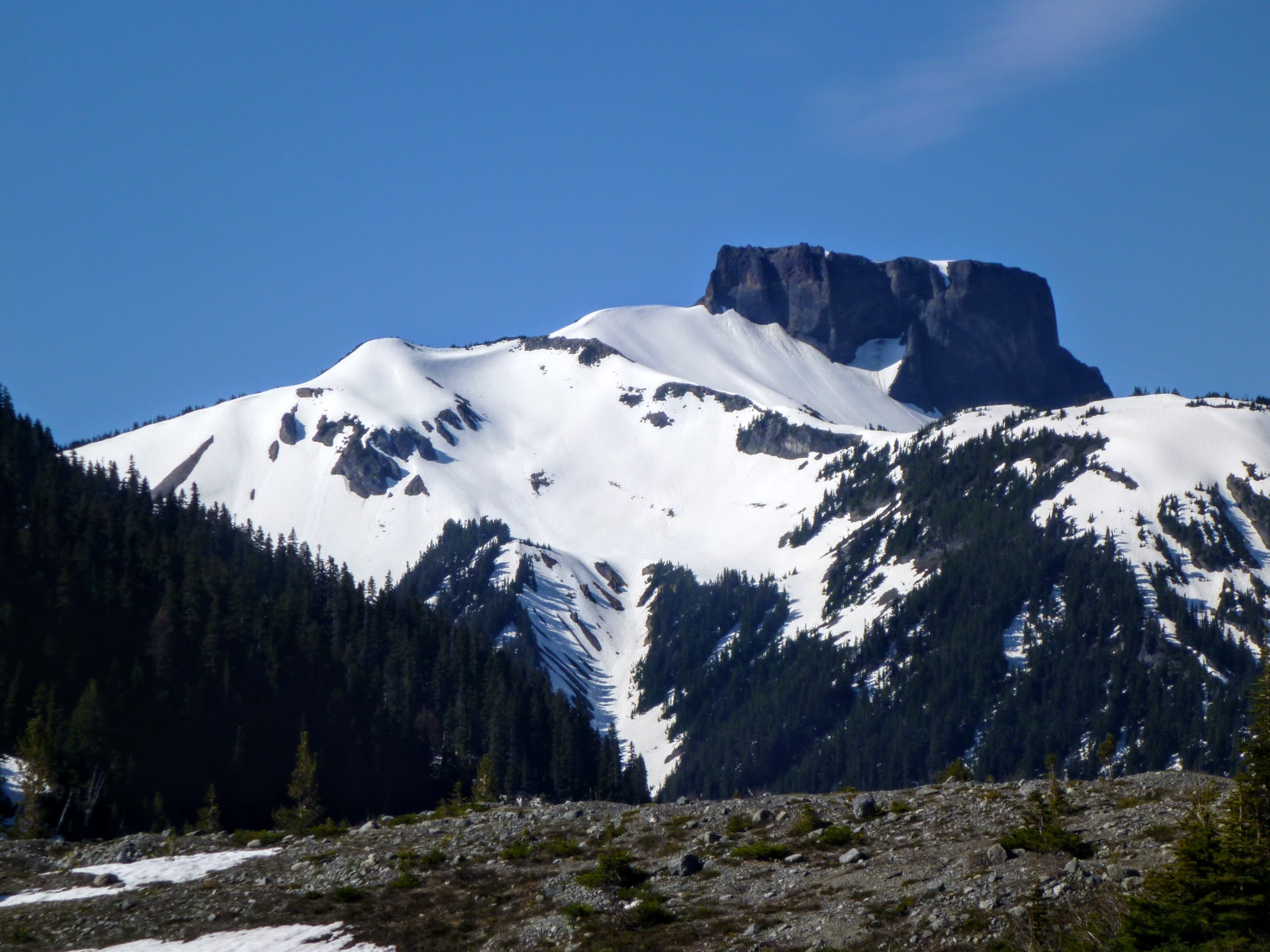 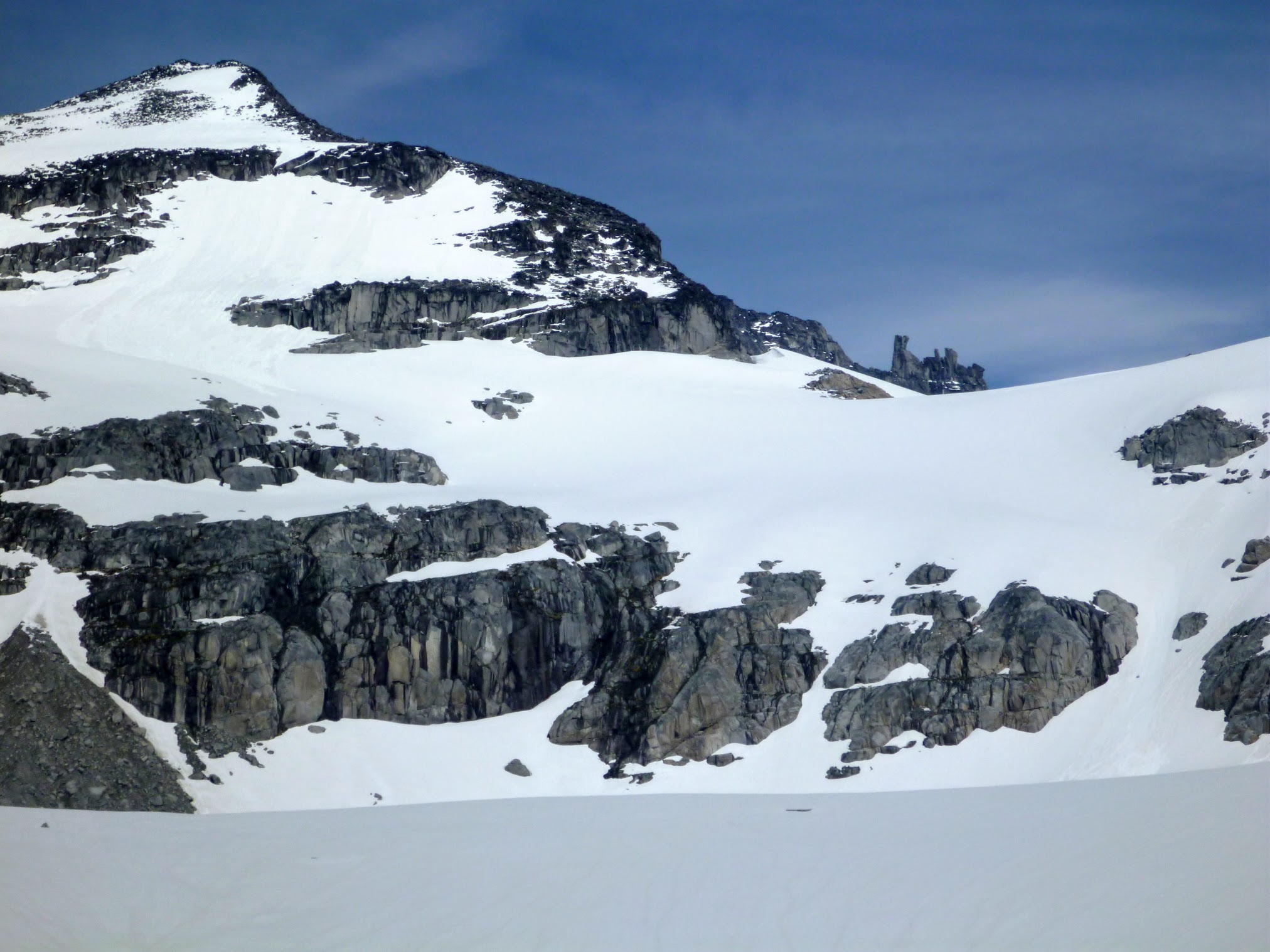 Castle Towers and Phyllis’ Engine on the Right

We thought we would have to bivy for sure. We even thought it would be dark by the time we got on top of Gentian Ridge. We skied down Castle Towers Glacier. We had to go west to get to Gentian Pass. 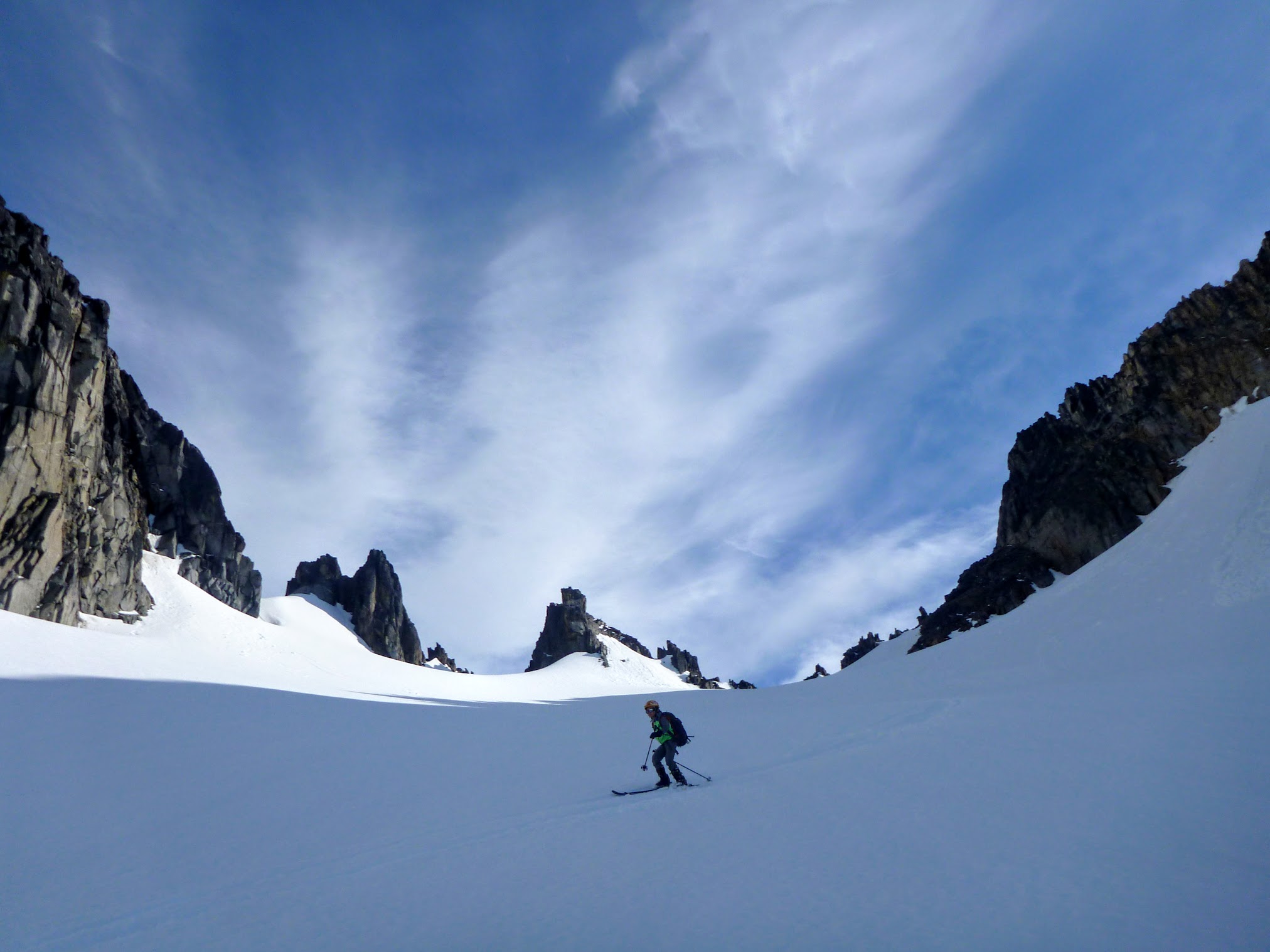 We saw wolverine tracks on top of our ski tracks from the day before, and we saw many more tracks than the day before. We hadn’t seen any people tracks other than ours for more than 24 hours.

When we were crossing the Helm Glacier, there was some horrible wet loose that had been in the sun for about 12 hours. Luckily we got back onto our own tracks where it was easier to follow. 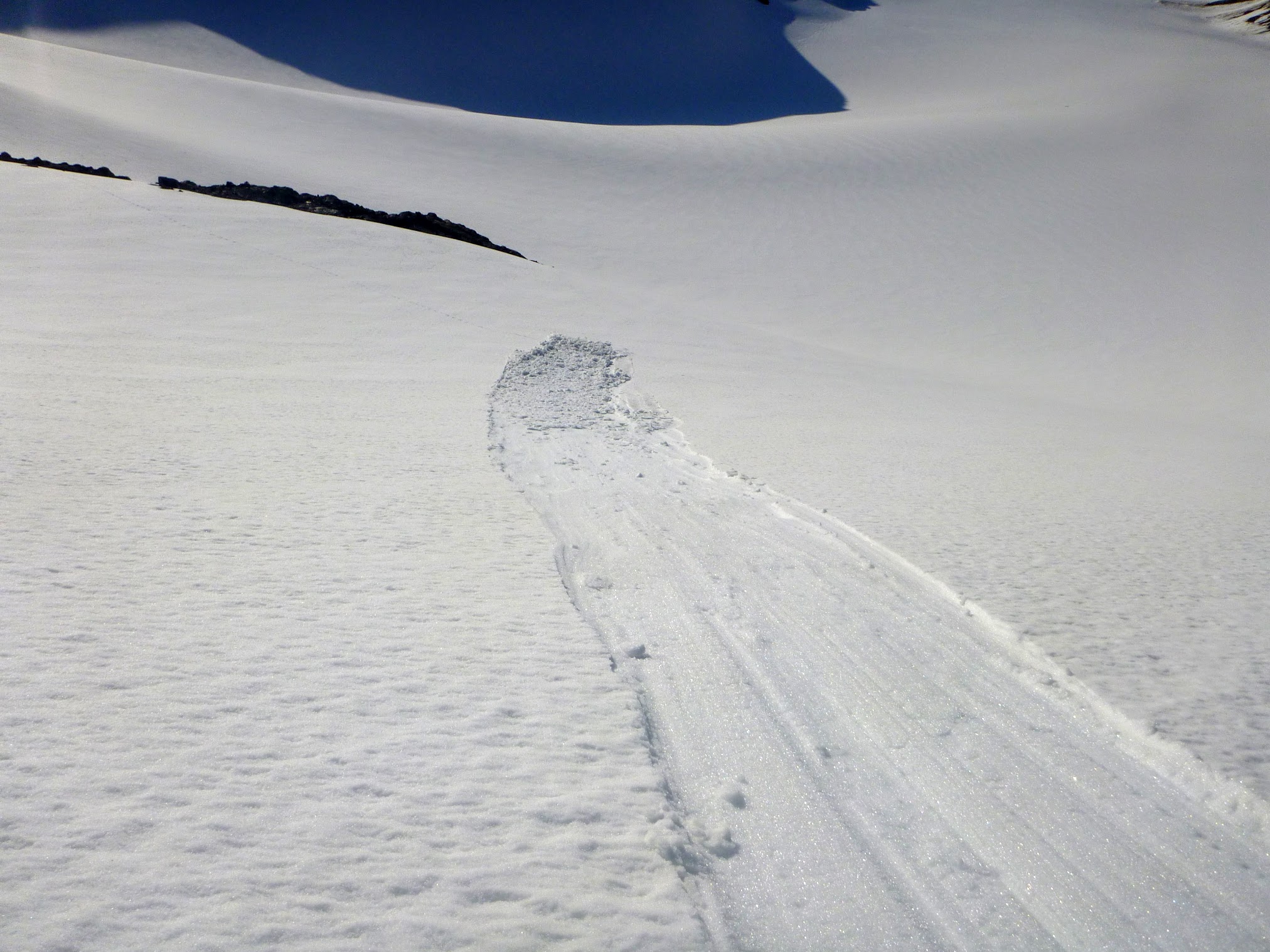 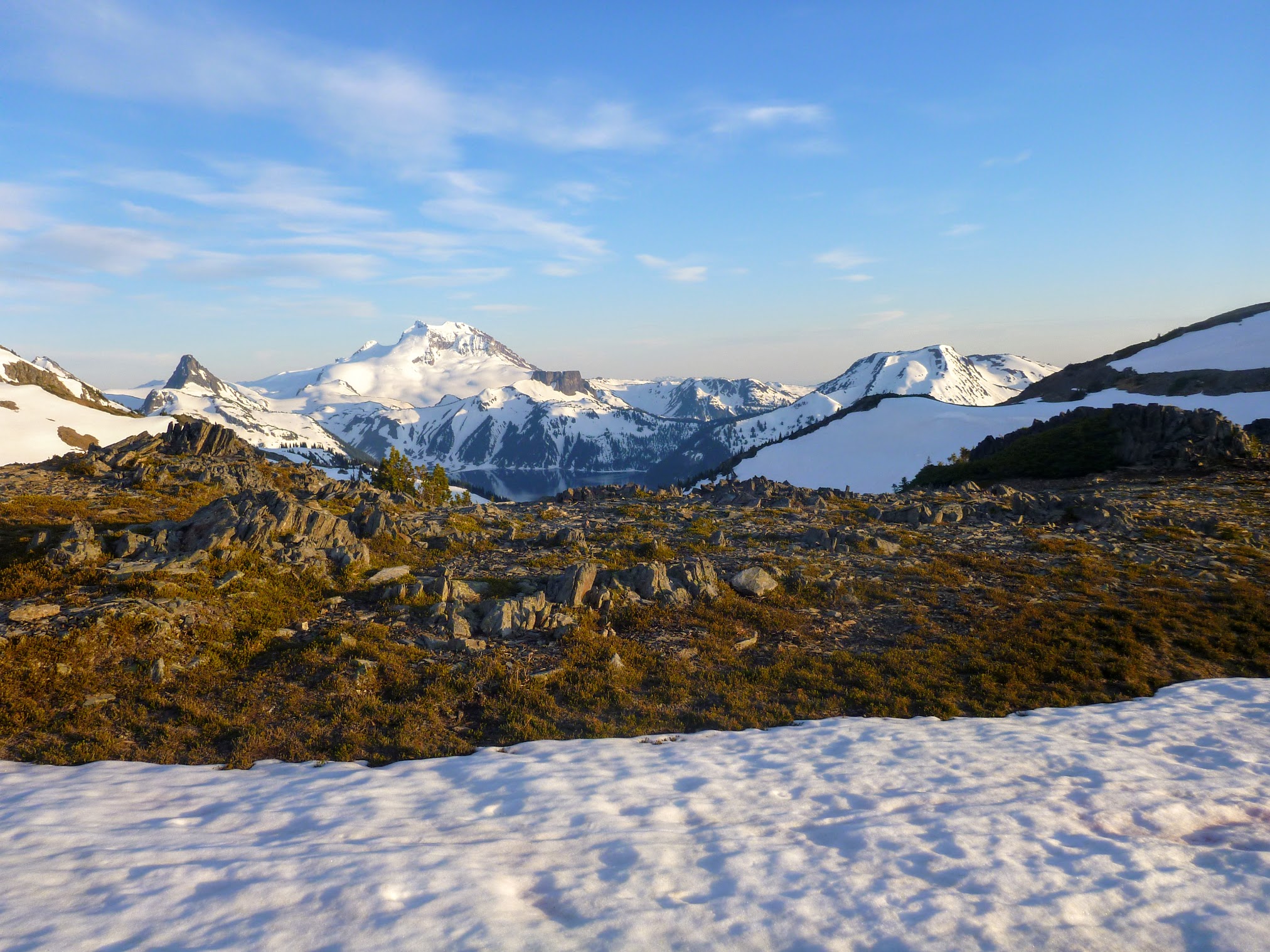 The View From the Col Between Panorama and Gentian 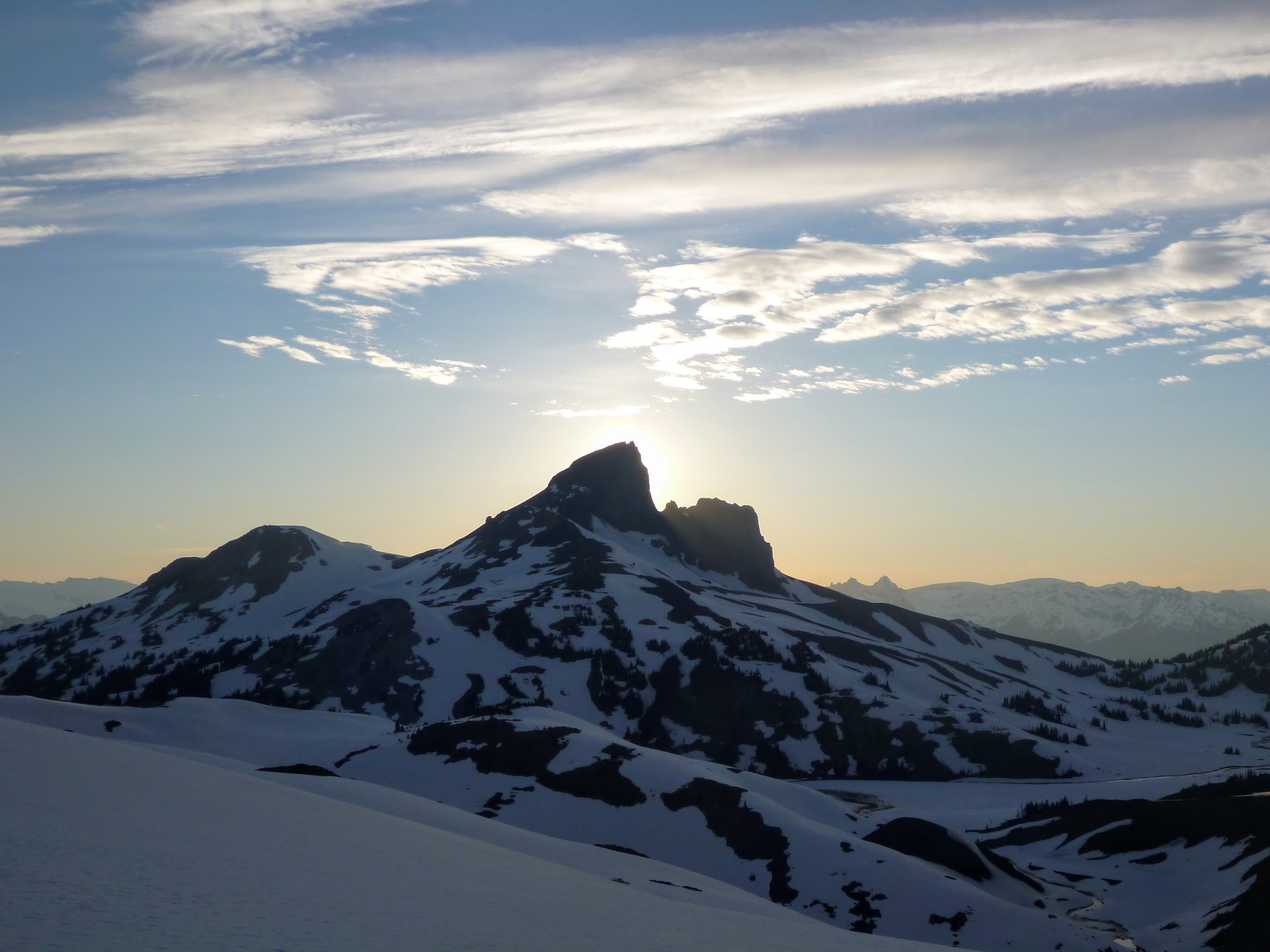 The Sun Starting to Set 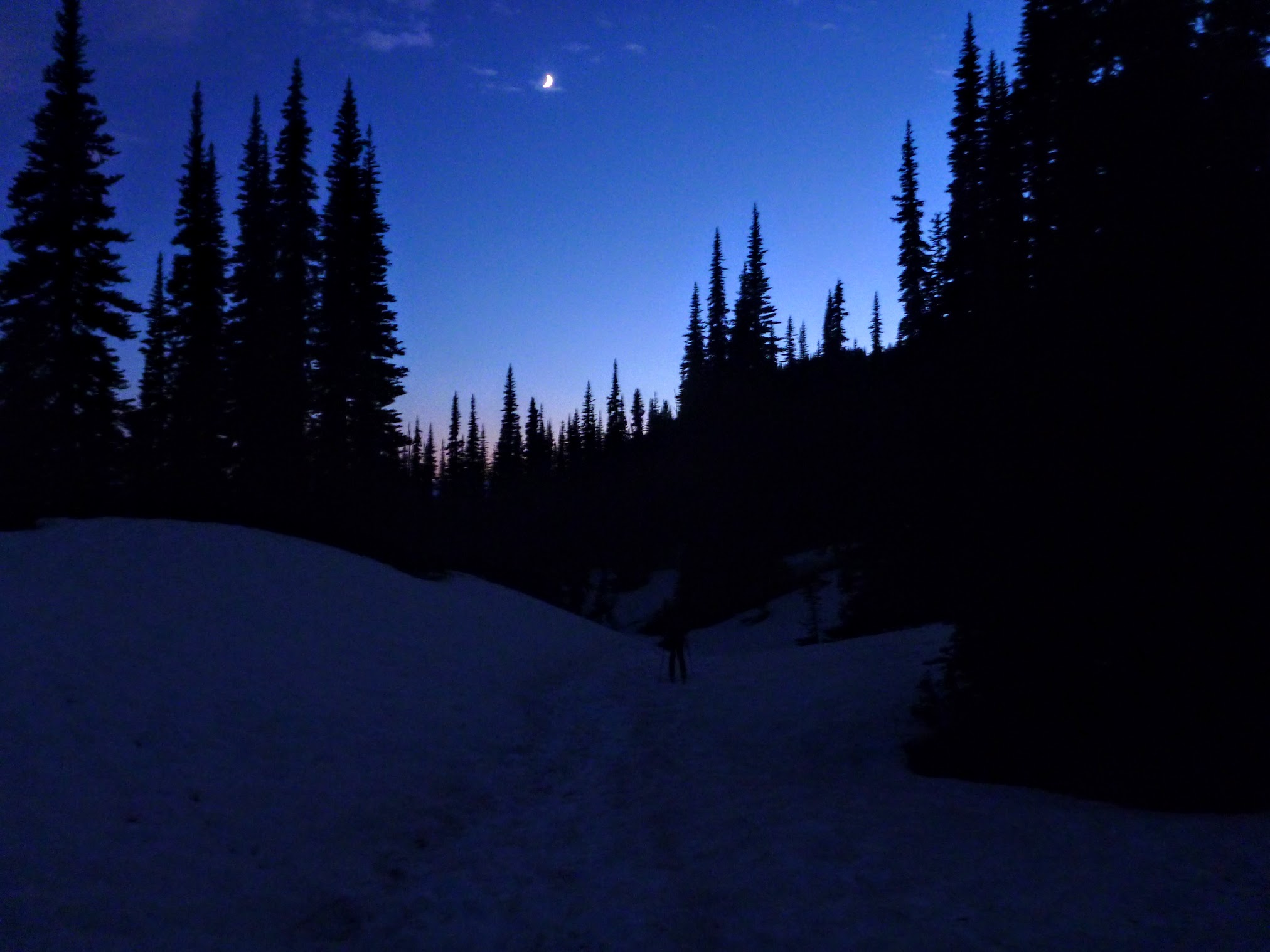 Taylor Meadows Under the Moon

At Taylor Meadows Campground, it was not worth it to have skis on, so we took our skis off and left our boots on so that we wouldn’t get wet socks. At the fork that goes to Garibaldi Lake (6-km mark), we put on our shoes and made it back at 2:15 am.