A sodden boot, or ways to sabotage a trip

Nowadays, Vincent Hanlon has abandoned BC and pledged allegiance to the province of Alberta for fieldwork in the Rockies. Occasionally he gets to visit BC for a few days to be reminded why he should make sure to come back. During one such break, we planned to go to Harrison Hut. So, last week, Vincent flew back to Vancouver and picked me up from the airport (I’d just been in Nova Scotia for a conference/bike tour). The weather forecast didn’t look great for Harrison. We waffled and had a few Skype calls during my layover trying to figure out what to do. Of course, Murphy’s law, my flight from Calgary got delayed till midnight (4 AM eastern time…), but nevermind at least we didn’t have to change our plans!

With an alpine start of 9 AM in Vancouver and with food for four days, we drove off and continued to debate the destination. We had minor ambitions for a revenge on Meslilloet after last year since the weather looked better there, but it seemed more suited for a short trip. So, after sleepily sipping coffee at Galilleo’s for much too long, we finally decided to head to Harrison after all. Fast forward to 2 PM and we finally set off from the old trail head. It was scorching hot and the mosquitoes were vicious. As the legs got more used to moving again, the sleepiness (and jet lag) drained away and we made progress. We soon found ourselves at Pika Creek which was flowing pretty high due to the snow melt from the last few hot days. 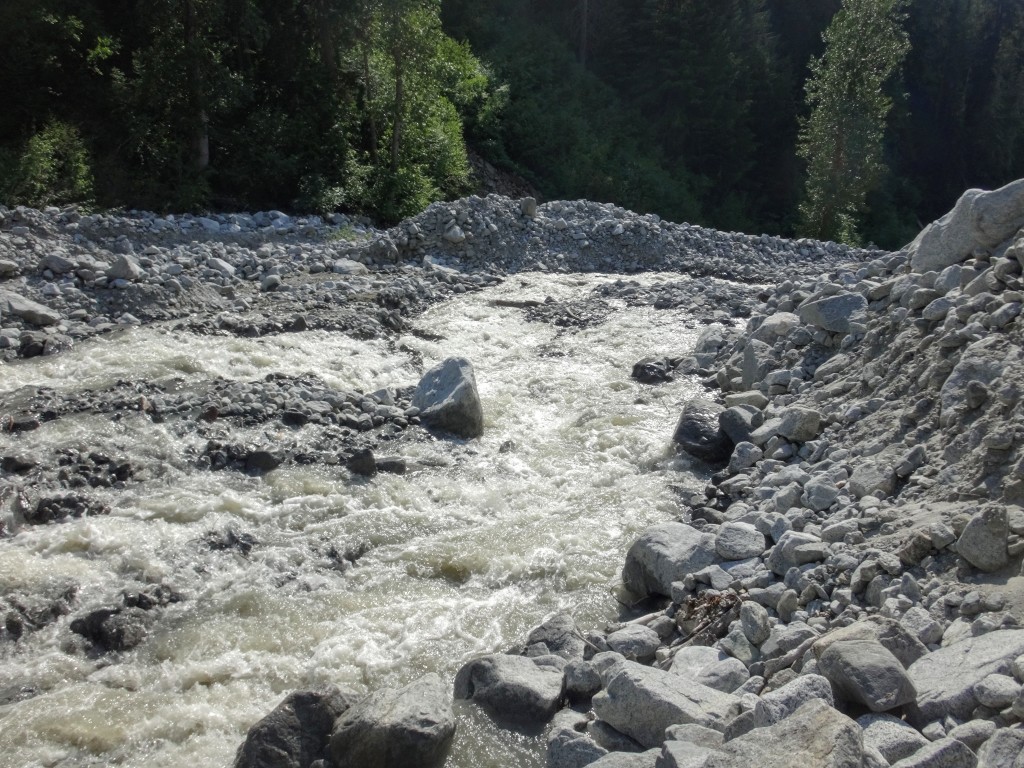 Pika Creek, roughly 20 seconds before poor choices were made.

We took off our boots to keep our feet dry and Vincent decided it would be a good idea to throw his boots across the creek. Before there was time to question it, Vincent’s arm swung back and both our minds calculated the trajectory of the boot and knew there was trouble. But, once the motion was initiated it was impossible to interrupt; alea iacta est, right. With a graceful curve the boot flew up much too far towards the sky and landed right in the centre of the fastest flowing segment of Pika Creek. I had just taken off my boots in preparation for the crossing and scrambled after the boot. The rocky banks gave way as I frantically chased the boot in bare feet (resulting in a purple toe), while Vincent sat and stared, thinking about his own stupidity. For comic effect, the boot passed within a meter of me, but as I grabbed a stick to haul the boot out it swept right by. Within a few seconds, we lost sight of it.

As the only one with a pair of boots remaining, I searched downstream, while Vincent stayed more nearby. About 250 m down Pika Creek, the main branch of the creek narrows to just a meter across. If the boot had made it through there, we’d never find it again. Looking back upstream, the creek branched endlessly, a messy mixture of fast water, woody debris, and rocks. Surely, the boots must’ve caught something! Although that thought did not provide any reassurance for finding the boot. I started wondering whether Vincent would be willing to hike to the hut in one boot with my much too small sandal on the other foot. I might’ve even appealed to some outside force. There was no chance. Having resigned to our fate, I stood on a rock island beside one of the main branches of the creek and stared at the churning water.

Wait. What’s that? My eyes must be fooling me. There, in the middle of a rapid, nudged precariously against a small rock, was a submerged boot. Only in brief moments with lower creek discharge, could I catch a glimpse of it. I waved and jumped excitedly to get Vincent’s attention, but all I got was a thumbs down. Long distance communication doesn’t work too well. The boot didn’t look stable and I didn’t dare miss it again. The fast flowing water was above my knees, so I looked for a way around, but there was none. In the end I decided I could reach it safely enough and accepted being soaked. Vincent’s excitement was tapered by the hangover of stupidity, but nevermind, the trip was meant to continue!

The new Barr creek bridge, 100 m upstream from the old one was great. It feels much more stable. The work hike crew that arrived after us helped improve and mark the trail to and from the bridge. 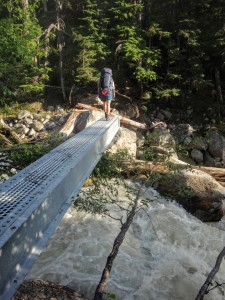 Another couple of hours with frequent breaks and we were at the hut, even before sunset! In total it took around 7 hours from the car, including an hour for the boot search; not bad. Much more pleasant than my first visit to Harrison Hut. 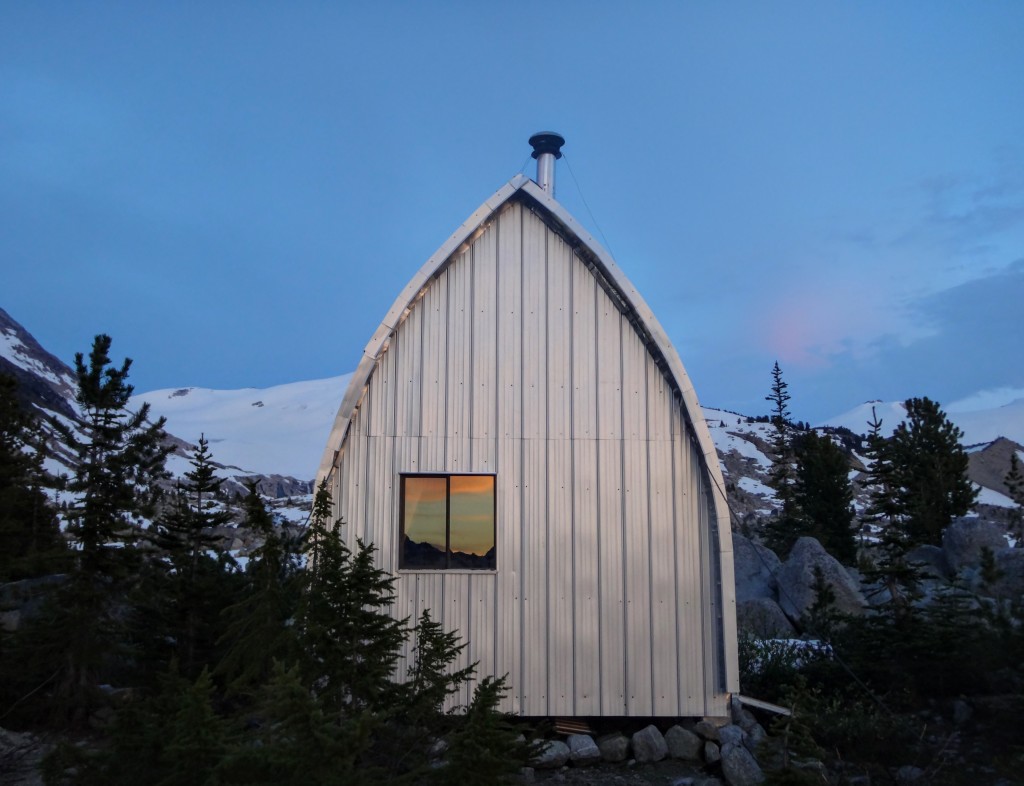 Reflection of a beautiful sunset at Harrison Hut. 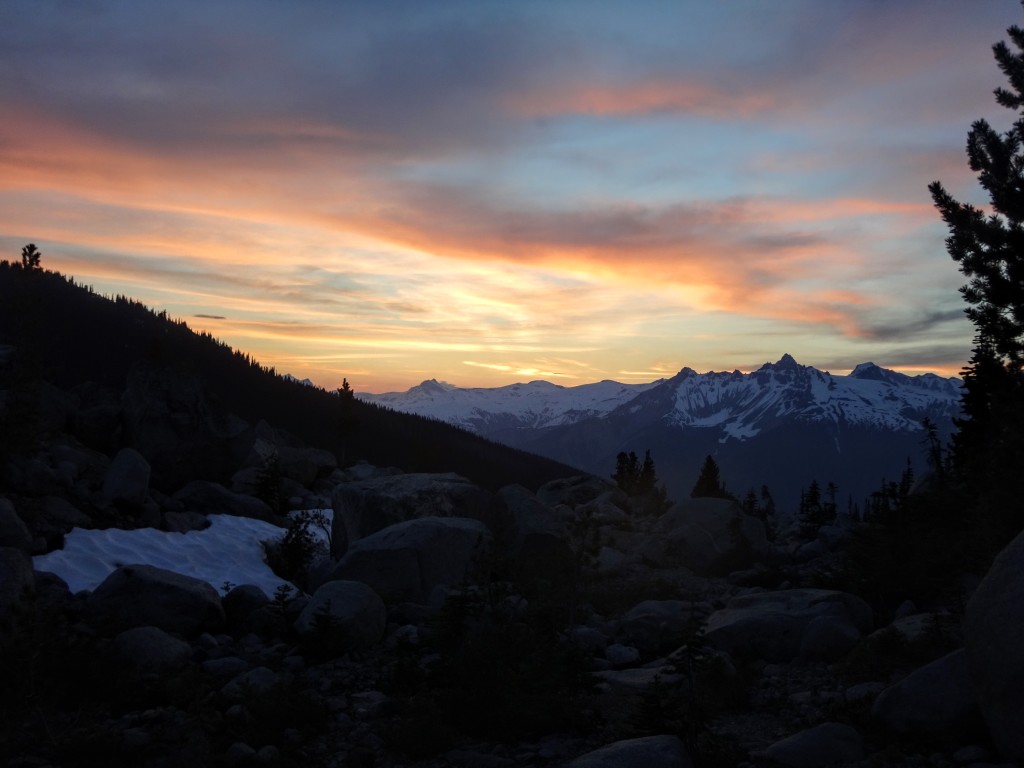 To avoid adding too many boring details to this trip report I’ll try to summarise the rest with snippets and pictures.

Originally we had ambitions to go up Mt. Overseer right away, but we were both in need of some rest after our hectic weeks. We visited the lake below Rollercoaster glacier, watched what turned out to be mountain goats with two little ones that bounced up and down, napped in the sun, went for a swim, and watched what we think might’ve been a drowning duck. 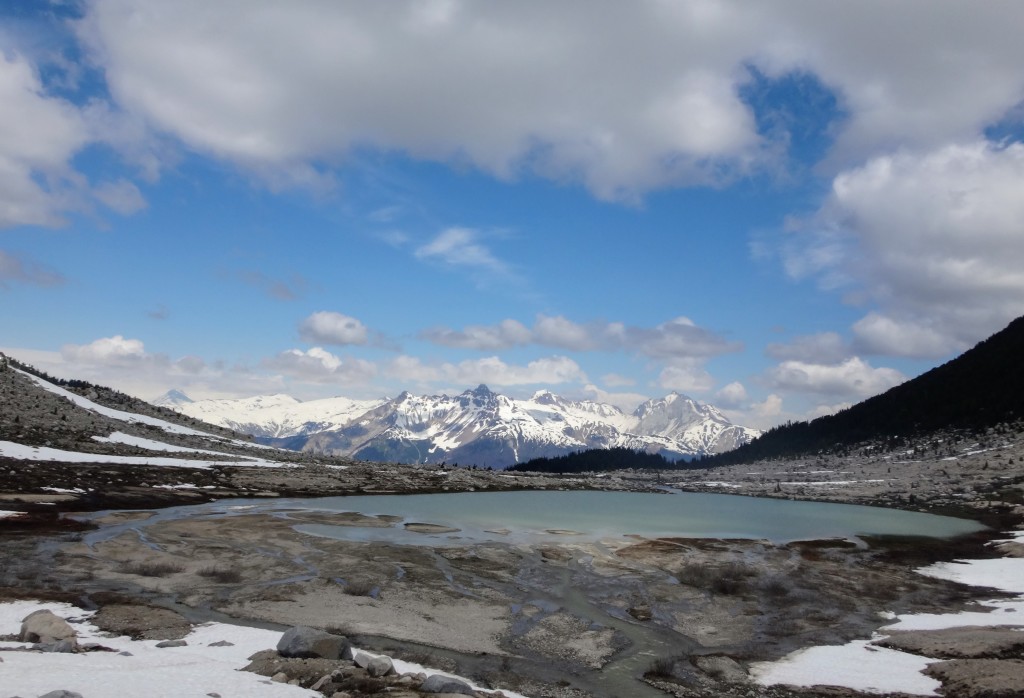 Looking at Mt. Meager from the lake. 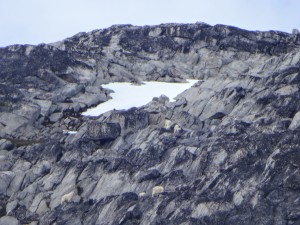 Bad picture of the incredibly tiny mountain goats. There was a highway of their prints crossing the Rollercoaster Glacier.

The following morning we woke up to ominous looking clouds, although better than predicted by the weather forecast. “With the heat from the sun they’ll rise out of the valleys and above the glacier.” Hmhmm. I was sceptical, but Vincent was quite convinced. Well, it didn’t hurt to try. Morning clouds on the Rollercoaster Glacier.

Given the time of year and since we were uncertain about the conditions on the glacier, we chose to rope up, leaving quite a bit of rope between us and adding knots to increase drag. Being the smallest, I went in front as the guinea pig. Crevasses were just starting to open up, but probing revealed that the snow bridges were plenty thick to cross. 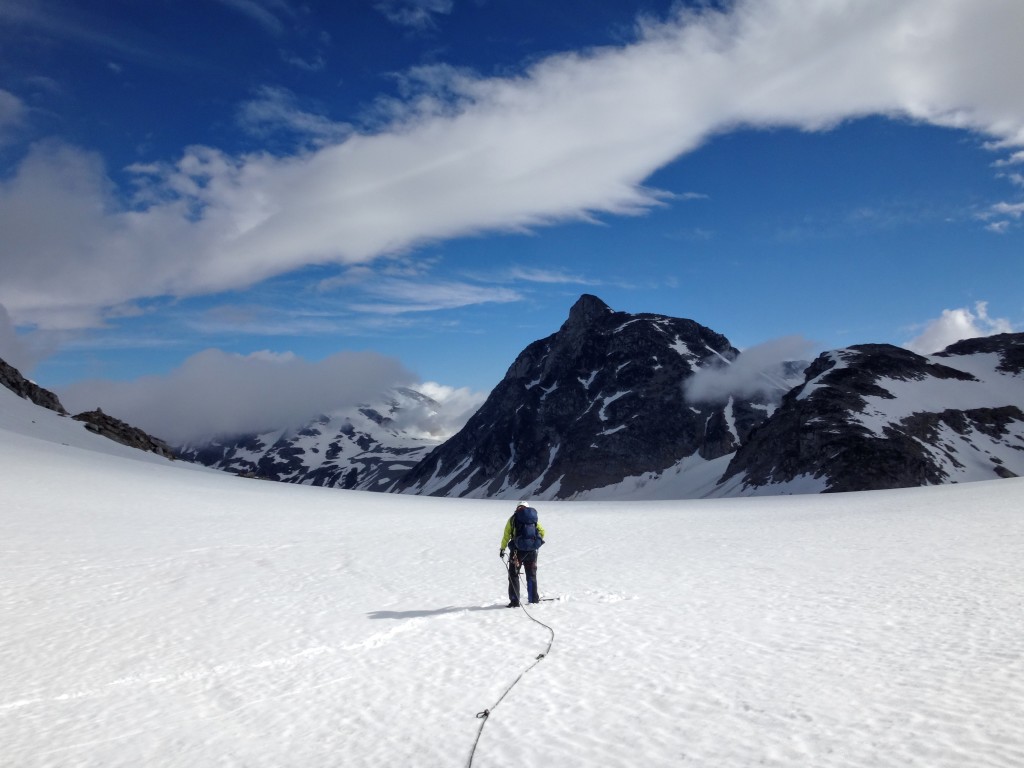 A brief (2 minute) glimpse of Mt. Overseer as we reached the col near the top of the Rollercoaster glacier, before clouds settled back in.

During a window of clarity, we took a bearing with my compass (didn’t have a GPS) from the col to Mt. Overseer and soon set off again. Clouds moved back in and we had no more visibility until the descent from the peak. 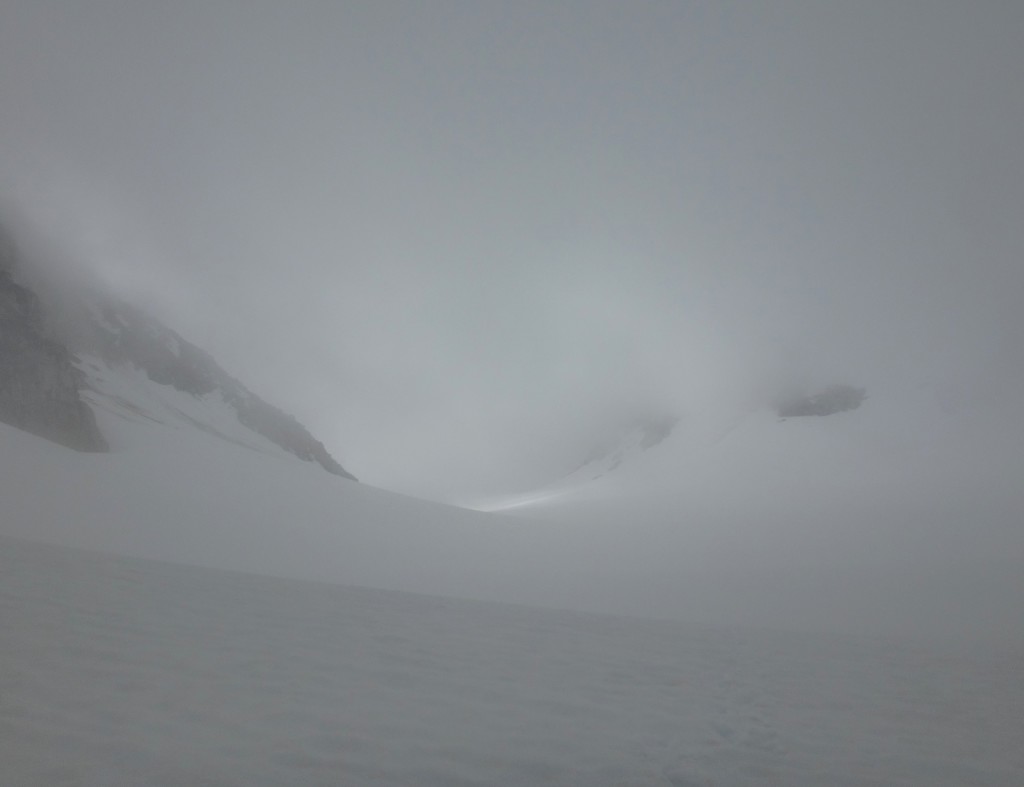 This was “good visibility”.

The route itself is wonderful — glacier travel most of the way followed by several hundred vertical meters of scrambling. The short section we took from the top of the snow slope onto the ridge of Overseer had horrible loose rock, but soon the scramble became pleasant with solid granite blocks. At the summit, we hung out bundled up in warm clothing and a sleeping bag, waiting for the clouds to clear, but alas that was not to be. Even during the clearing moments on the way down, the summit was generally shrouded in it’s own cover. Currently, there are still some good snow slopes to follow on the way down Overseer to the Madhorse Glacier instead of the loose rock section we followed on the way up; would definitely recommend them. The summit of Mt. Overseer during an opening in the clouds. 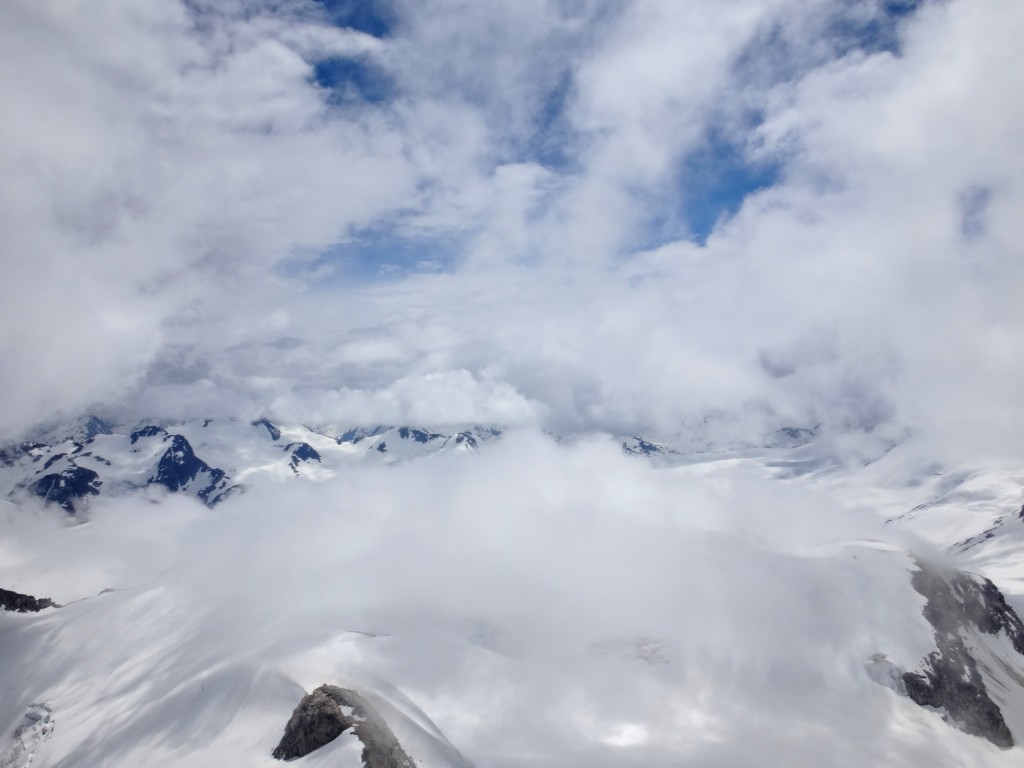 Looking towards the Pemberton Icefield. 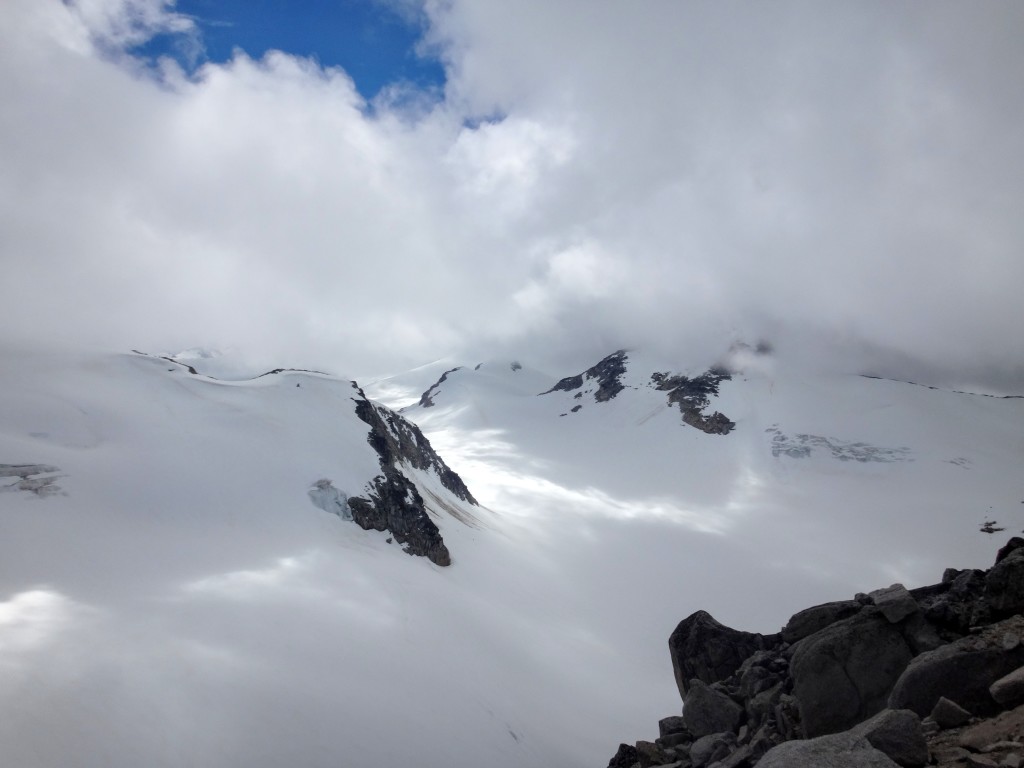 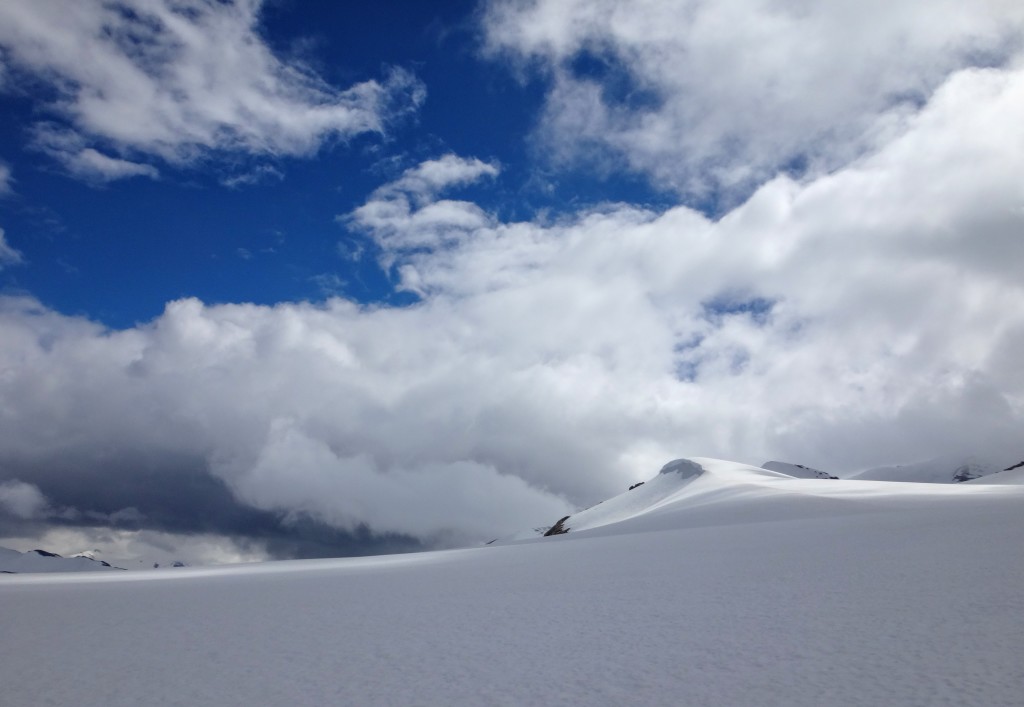 Dark clouds over the Pemberton Icefield in the distance.

And that was more or less it. I’d forgotten how incredibly beautiful Harrison Hut and the surrounding areas are. Although the drive is long, it is more than worth a visit! The VOCers in the 1980s sure knew where to build a hut.

On the way out the next day, we ran into our friends in the trail work groups near Pika Creek. Hopefully we’ll hear more about how their trip went sometime soon!

2 Responses to A sodden boot, or ways to sabotage a trip