Lukas and I had discussed attempting the true summit of the Black Tusk some weeks ago, after fresh and detailed beta arose courtesy of local fulltime peakbagger Steven Song. Knowing that it’s only seen three recorded ascents in the past two decades and somehow not alarmed by the prospect of rappelling off “choss bollards”, we decided to go for it. 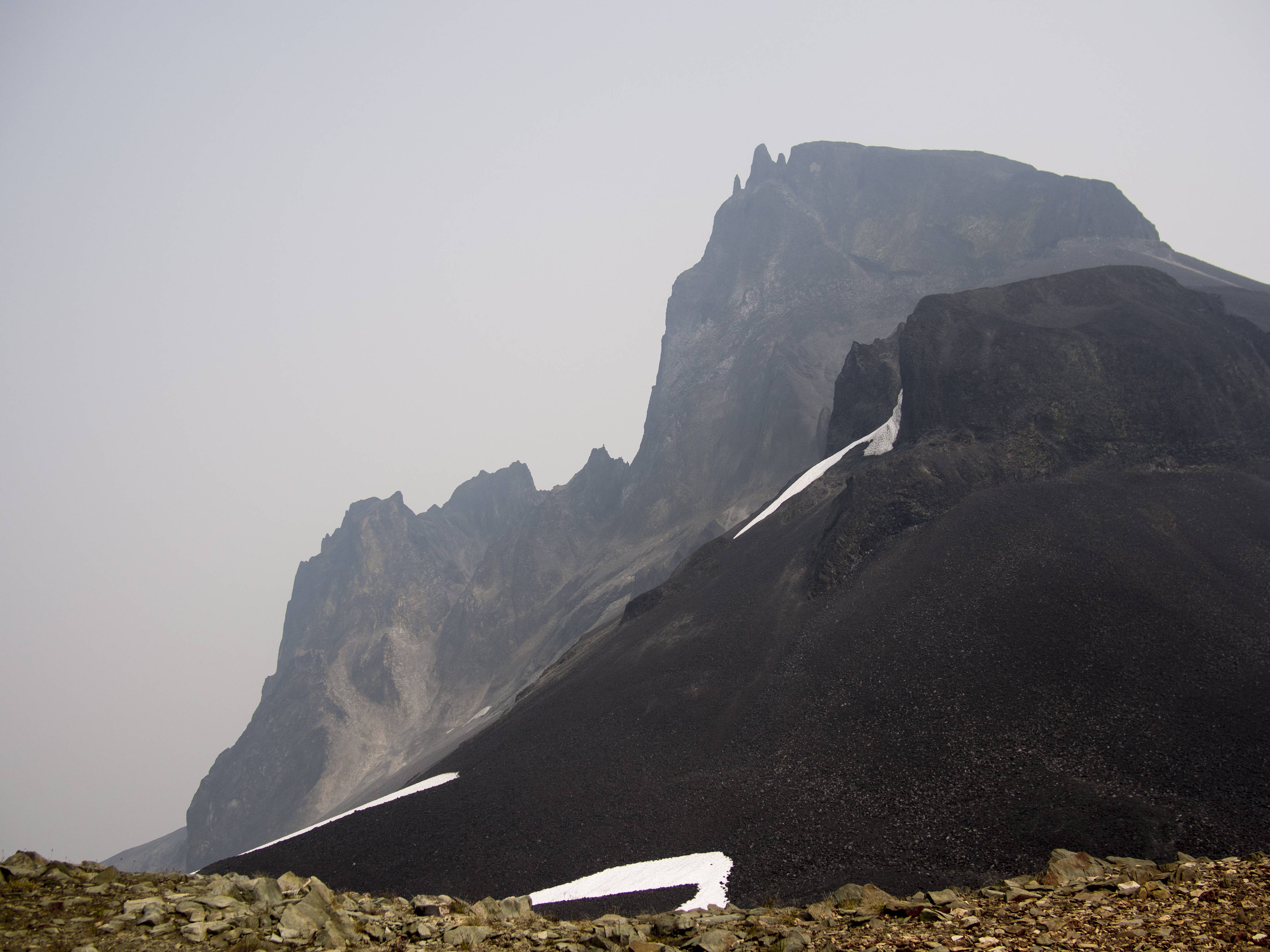 True Summit: the pinnacle separated by a notch from the plateau.

Our first mistake was attempting to approach via the Microwave Tower FSR. “Oh yeah, we can park at the park boundary and end up right at the base of the Tusk, brilliant!”. Unfortunately my reading missed that the gate is actually over an hours very brisk walking from the park boundary itself, and nearly 4 hours from the Tusk. Matters were additionally complicated by the atmosphere of Mordor moving in during our slogging up that road and making breathing unpleasant. Half way up I stashed a 20m static anchor line which I’d brought, reasoning that it was heavy AF and not actually necessary. 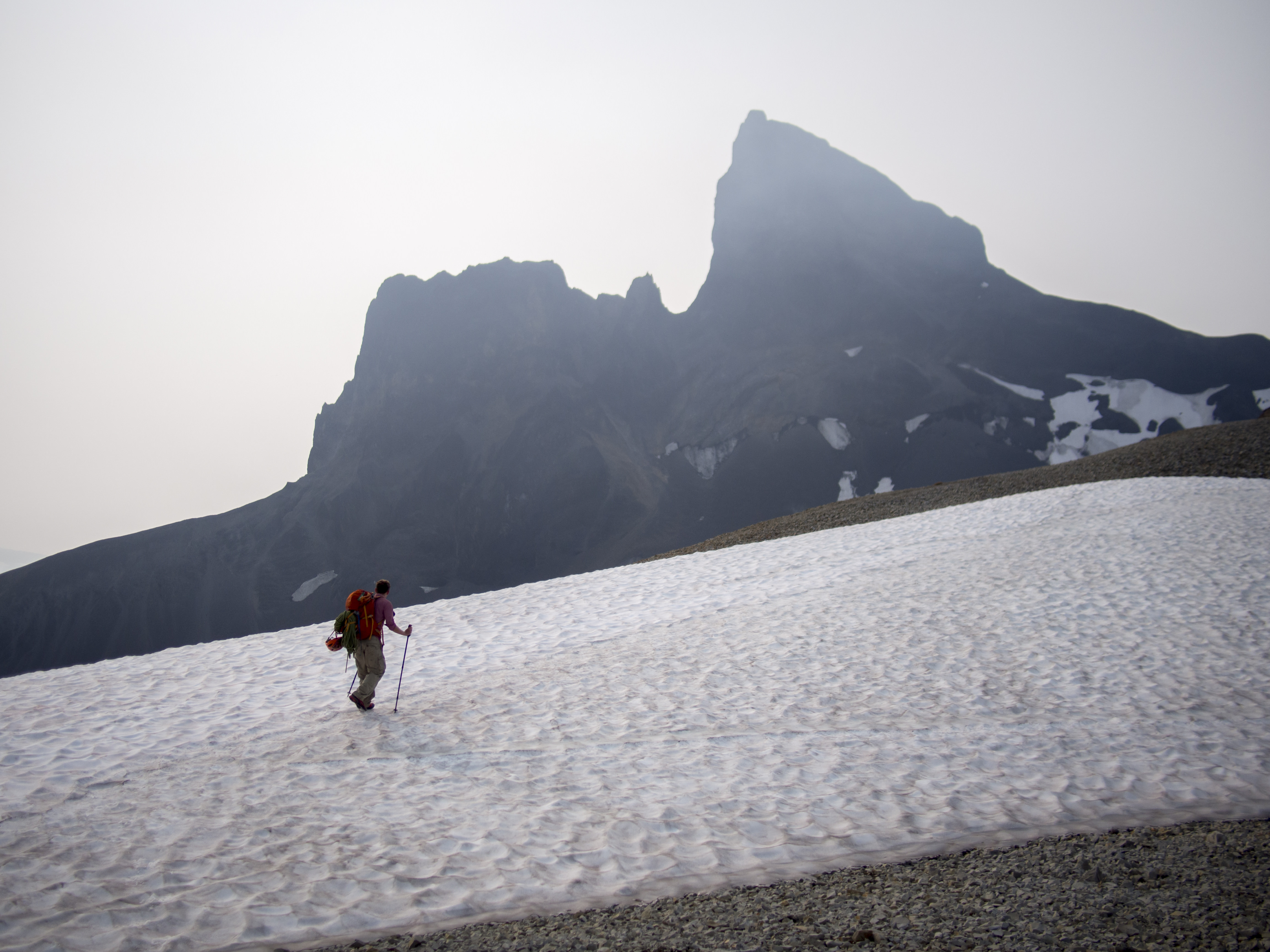 Just past the Microwave Towers 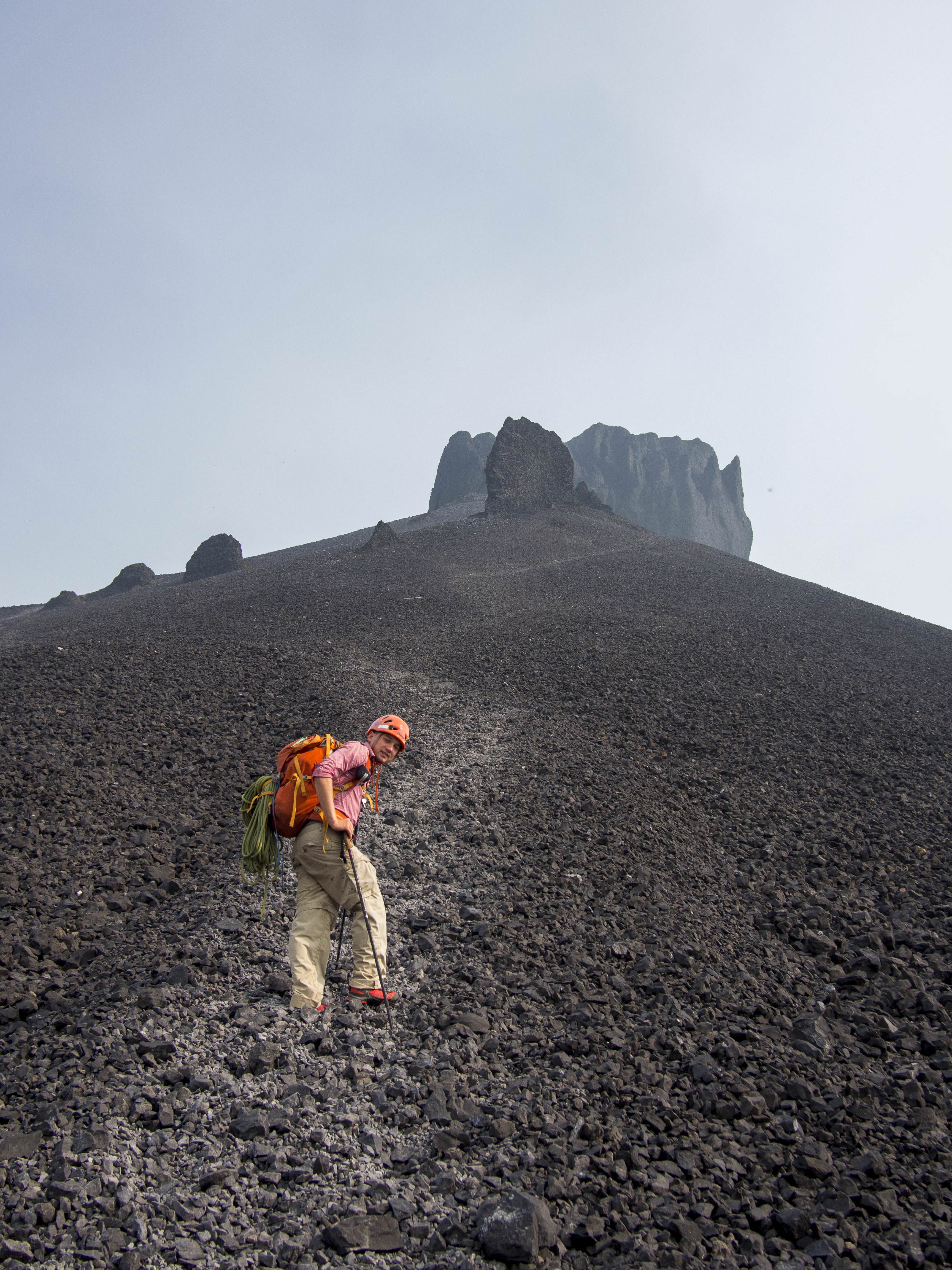 Looking up the *very* loose microwave tower side ascent trail.

Obtaining the false summit we spent a loooooong time deliberating making the attempt, where our points of no return were, and our general comfort level given we’d heard it shedding rock constantly for the past two hours of approach.

It was pretty easy to identify the choss bollard which the last group used, and I rigged a static line around it and then piled more rocks on top of that giving us a “solid” rap station which probably wouldn’t kill us as long as we didn’t take a dynamic fall on it. Lofty ideals, given the nature of the rock we’d be ascending.

We had opted to make this attempt using a single 30m line and save the weight of carrying dual 60m ropes, in hindsight a ridiculous choice which was responsible for the events about to transpire. I would like to pause here and emphasize to any readers that rappelling on a single strand is extremely, outrageously, dangerous and should not be attempted. 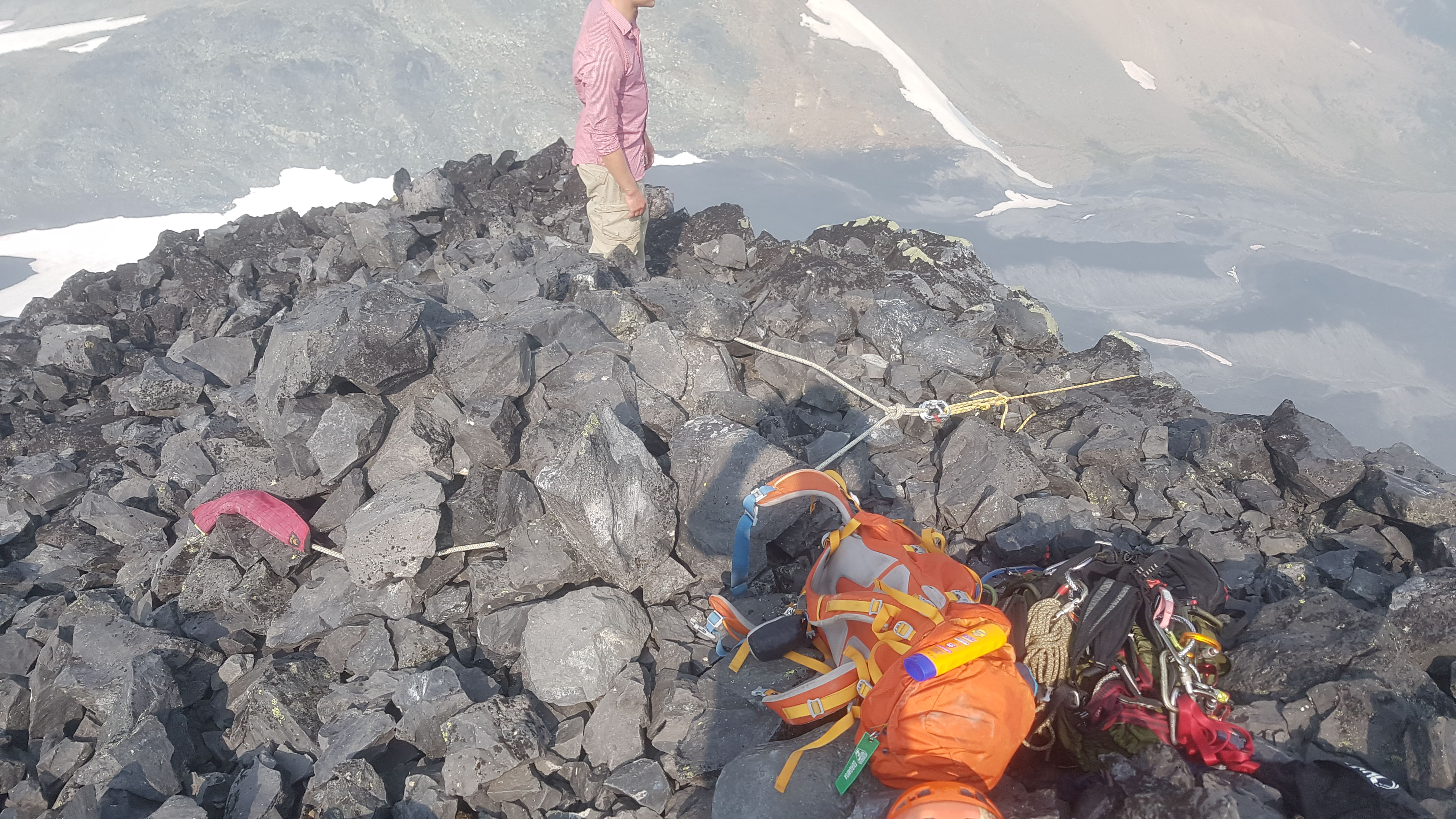 Lukas volunteered to go first and bravely descended into the notch noting “everything is very loose in here”. I kept an eye on the anchor and noticed some light fraying where the rap line crossed the immediate edge, so I put my last piece of rope-pro around it once Lukas had unweighted the rope.

Unfortunately, as I reached 10 feet below the anchor while descending myself, the hazard in our choice of single strand rappel was revealed: there was a ridiculously sharp edge which could not be seen from above and which I lacked any further rope pro to guard against, and I discovered this after I had already rapped past it. I looked up, noticed severe fraying in the line, and promptly felt a liquid chill run up my spine and through my limbs. Very refreshing given the climate, very unpleasant given the immediate drop to certain death if it failed. Rapid calculations left me very skeptical that the line would not snap should I fully descend to the bottom and then re-ascend it. I am also exceedingly paranoid about rope condition, so maybe it could have held just fine, we will never know.

How Stevens party in July (who also used a single-strand 30m) avoided this damage I do not know. It’s entirely likely that, given the shifting and ephemeral nature of the choss up there, that the sharp edge we encountered simply did not exist a month prior or was created during their exit climb. Or they neglected to mention coreshotting their line in the report, but I find this extremely unlikely. 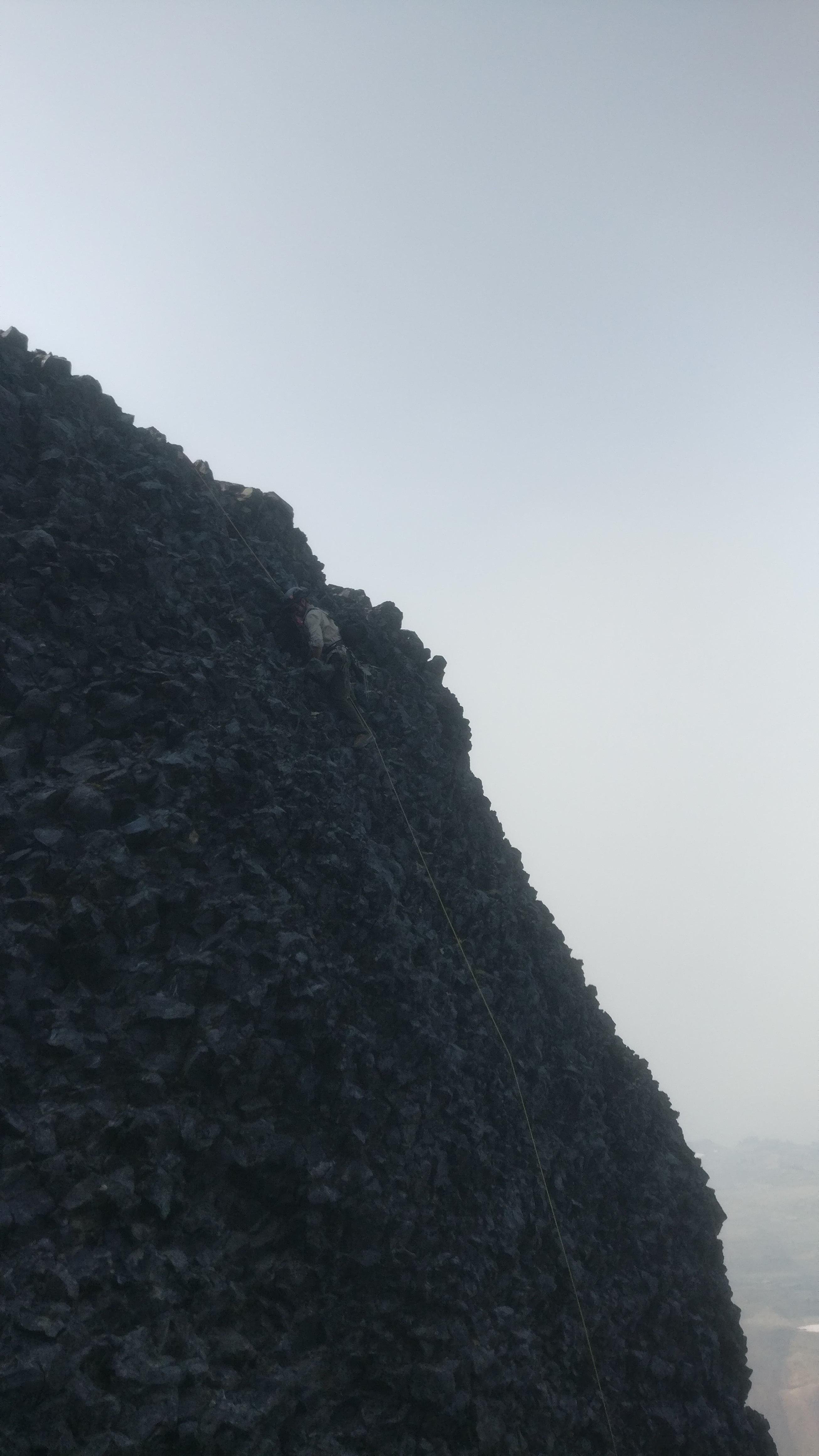 Ryan, shitting bricks on a pile of floating rubble.

So I shouted at Lukas that we were aborting the summit attempt, attached my Jumar while holding the rope out from the rock, moved past the frayed spot as fast as possible, and quickly obtained the anchor. Along the way I dislodged a basket-ball sized boulder when I touched it to see if it was a viable hold, triggering a not-insubstantial slide down the north face of the peak.

Lukas meanwhile scrambled up the gully to the base of the final pitch, and after some deliberation decided that (while it would definitely go and is much lower angle than it appears from the false summit) he wasn’t up to doing it alone without a rope to keep any potential fall to a more survivable 30m. With only three recorded ascents in the past twenty years, 10m from the top still puts him in a fairly select group of lunatics. 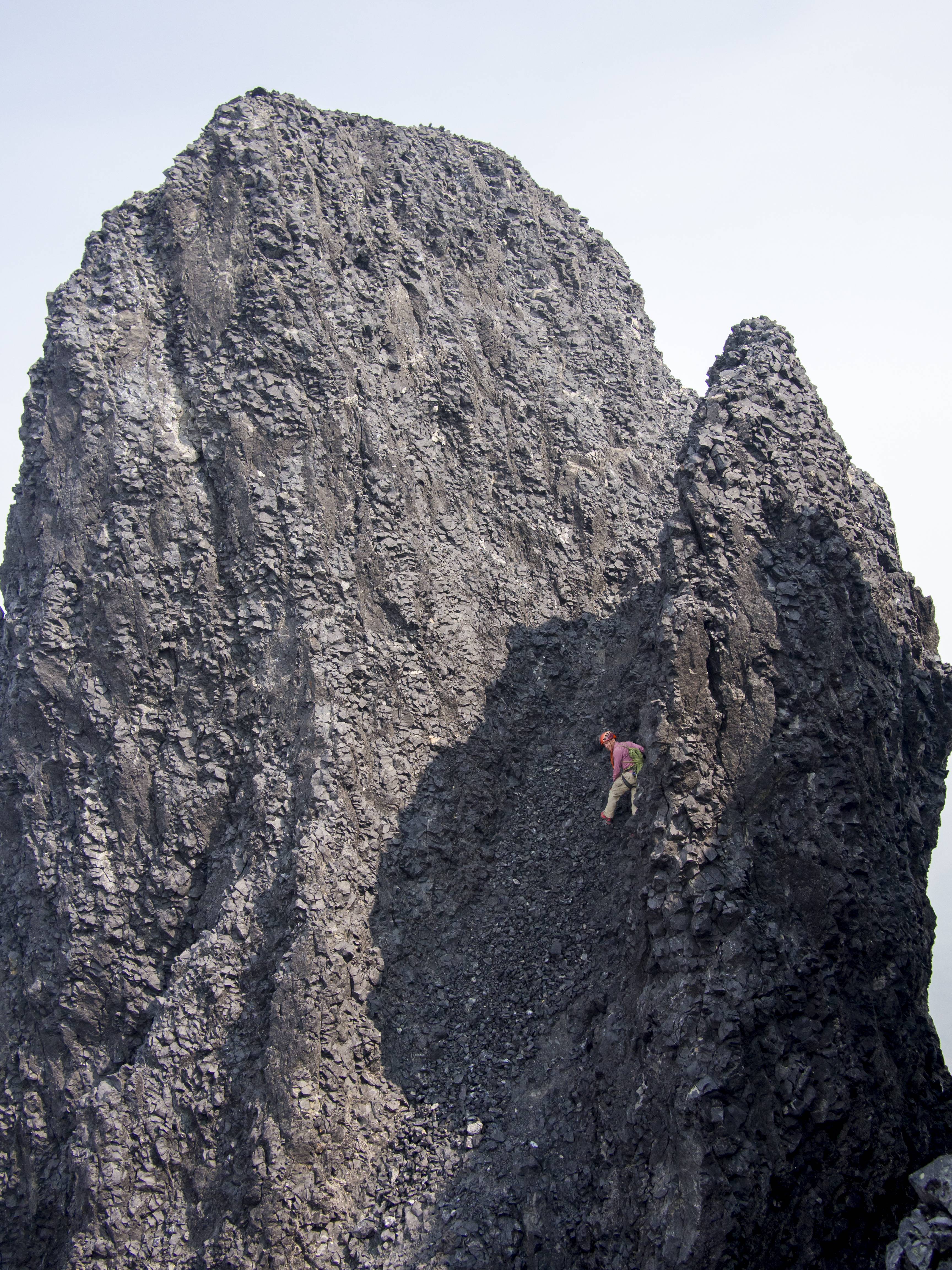 Lukas, just below the true summit.

Some faff and a frankly hair-raising amount of rockfall was involved in deploying the 60m line and retrieving Lukas from the notch. After some discussion of what had transpired and packing up we set off to slog back to the van, arriving at 6:10pm: twelve hours on the dot after we started.

The smoke had moved in hard by that point, and the air was best described as “chewable” during our exit which made for unpleasant body sensations. Lots of delicious salmon berries, however. Along the way I discovered that some dirt bikers had found, and stolen, my stashed rope. To add insult to injury they’d written mocking messages about our (rather insecure) bear cache on my van windows. At least they didn’t break anything. 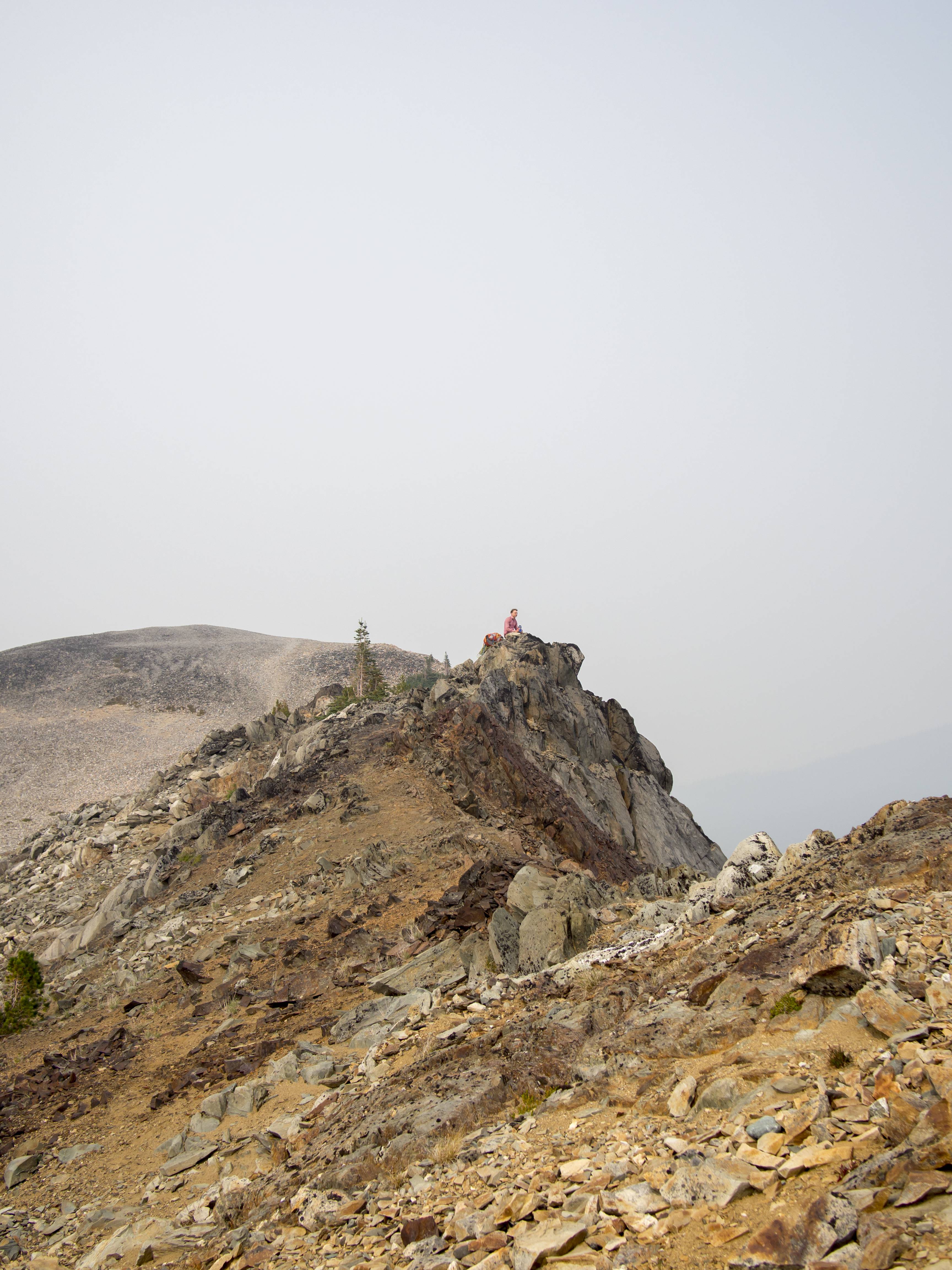 Reflecting on the events transpired.

While unhappy that we were unable to achieve the full summit we agreed that it was a valuable learning experience on one of the worst pieces of utter garbage and easily lethal rock in the province, and that if we hadn’t made some spectacularly poor choices in gear we’d have a much better TR to submit. Or we’d be very dead, or in the news as a ridiculous SAR case, as that rotten pinnacle is a total game of roulette regardless of climbing ability.

I would not in good faith recommend this summit to anyone unless you are extremely experienced, have solid confidence in free soloing 20m+ of extremely loose class 4 with a 500m drop to your death, or are very very stupid.

5 Responses to Sharp Tusk – A Tale of Choss Anchors