Posted on September 20, 2018 by Jeff Mottershead

This was supposed to be a totally pleasant but not-worth-writing-up trip. Anita and her 6-year-old son, Ethan, were over for a hut trip, arriving Friday afternoon. The plan was to go to the Batchelor Lake Cabin in Tetrahedron on Friday night and then on to Edwards Lake Cabin Saturday before making a desperate escape Sunday to get Ethan and Anita on their 5:10 flight on Sunday. That’s actually more or less what we did, but there were some wrinkles.

Despite there being a deluge of monumental proportions as we left the ferry, the rain wasn’t too bad when we arrived in Tetrahedron at about 10:20 PM. Devlin is very used to this kind of silliness, but Ethan is not at all, and he still did really well.

We were looking for the Batchelor Lake Cabin, which BC Parks and the Tetrahedron Outdoor Club both agree exists and has a “t.” We did not find it. We did find a hut that has a big sign on it that says “Bachelor Lake Cabin” and felt that it was likely good enough. I doubt it would have been much better if it had a “t.” 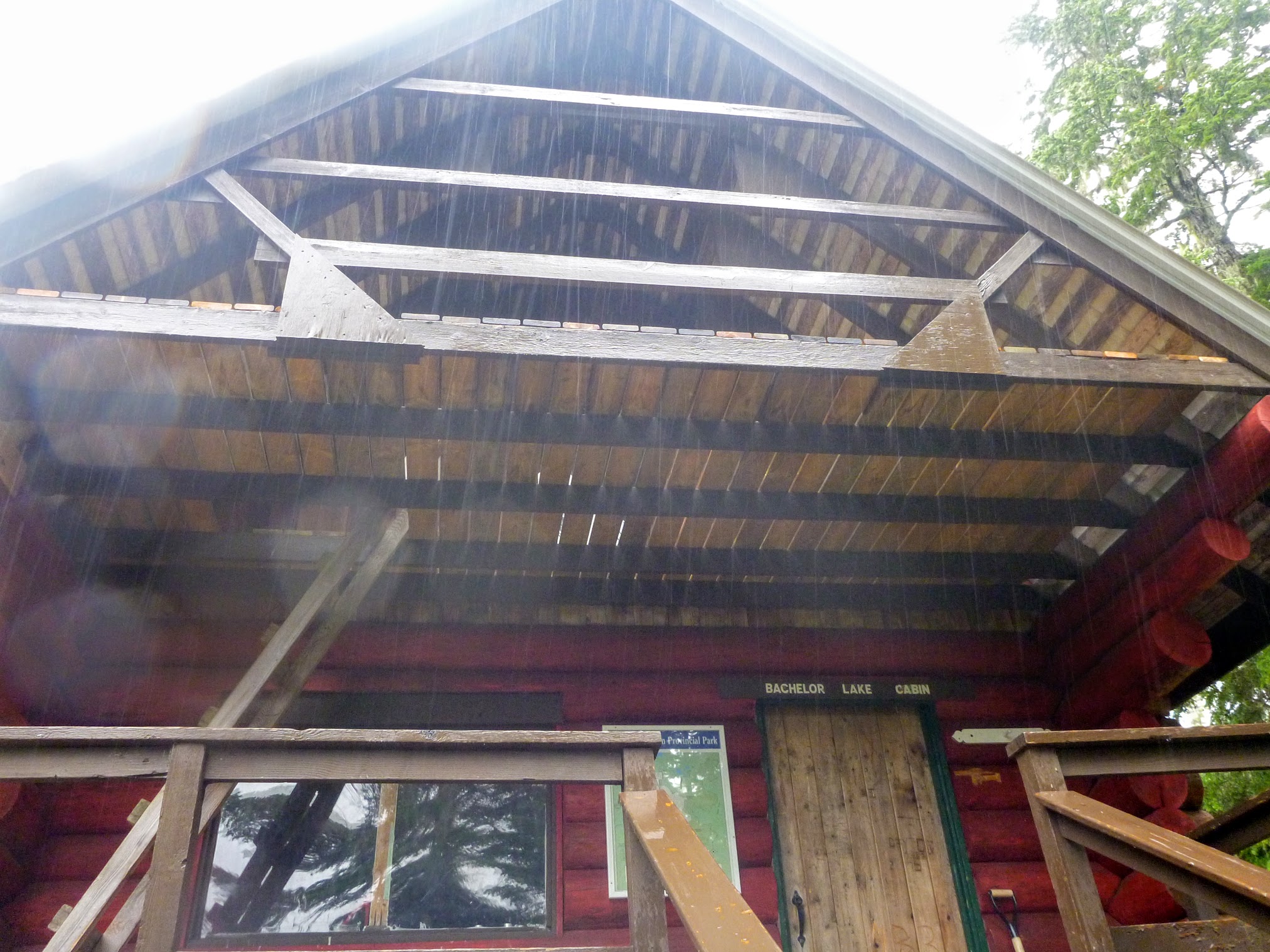 If I was the person that put the effort into the sign on the door I’d be pretty disturbed when I found out I missed a letter.

After giving the kids the rest they needed, we started moving at something like 9:30. The damper on the stove cooperated and kept one log slowly burning all night, and clothes were dry when we got into them. 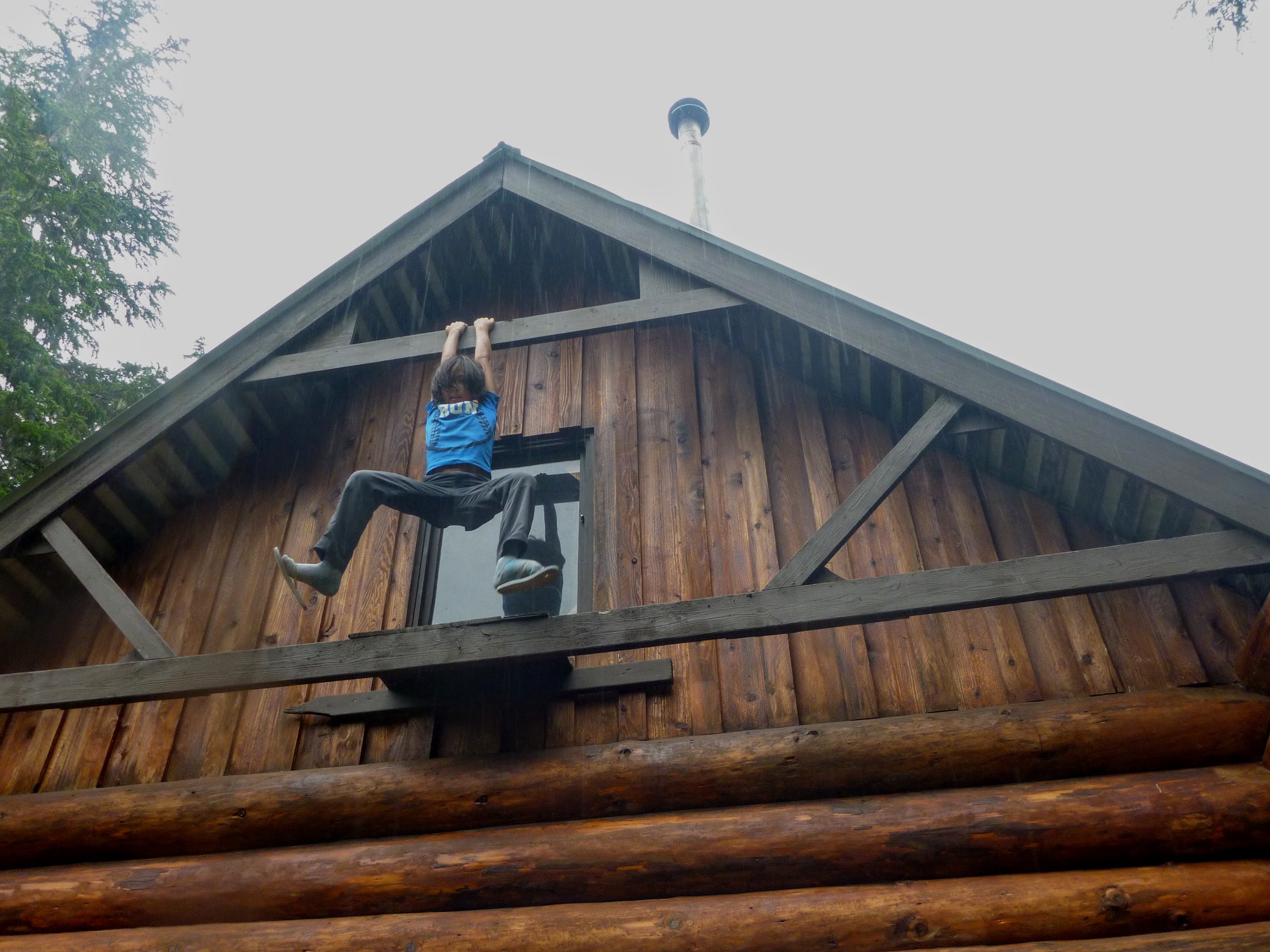 Devlin was a big fan of the emergency exit. 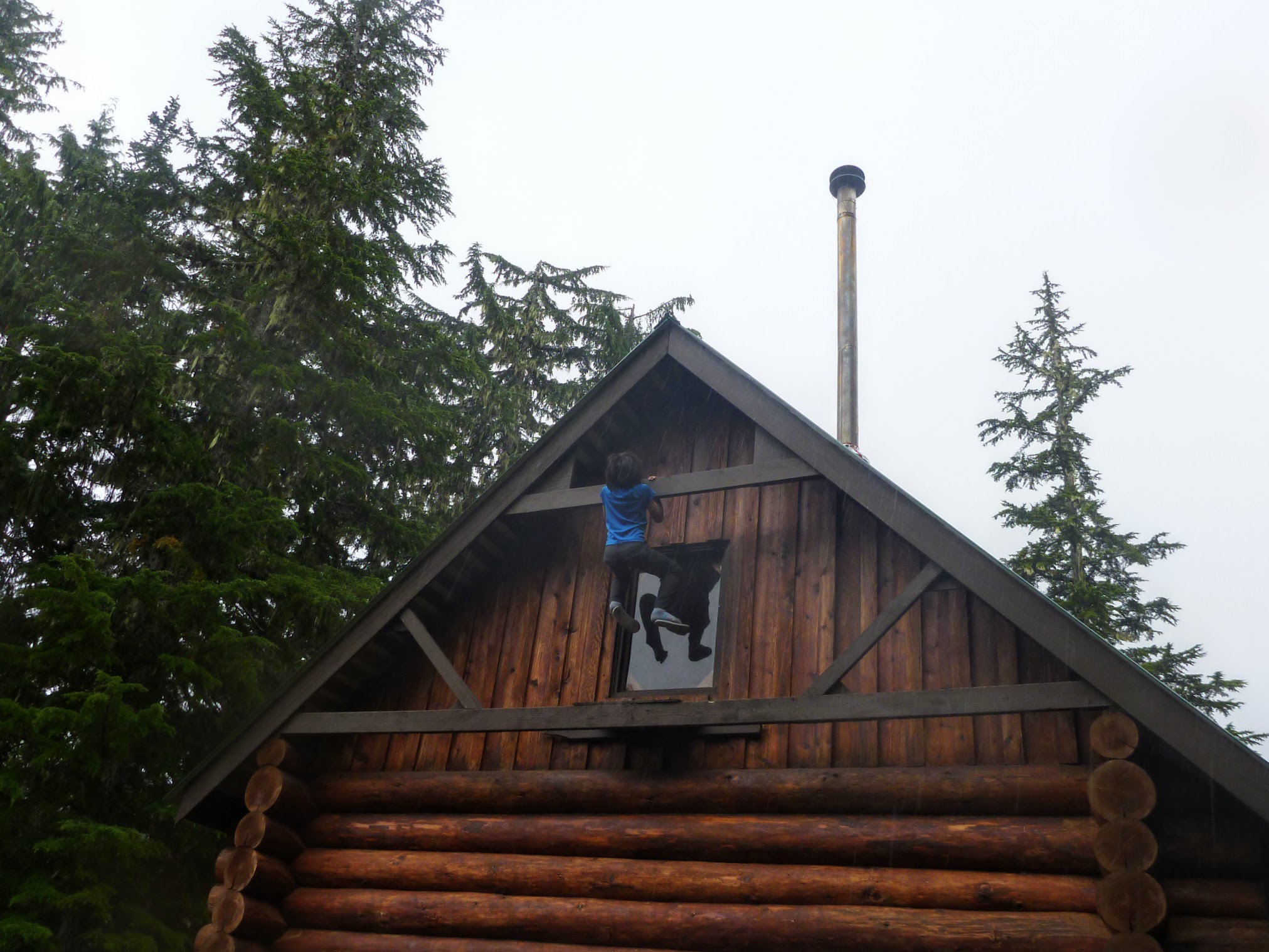 I’m pretty sure the emergency exit was the best part of the trip.

The hut itself is a glorious object. If you wanted to offer a course in hut building, it would involve a field trip to that hut if it was any good. It didn’t have the bling of some of the ACC huts, but it also wasn’t locked and didn’t cost an arm and a leg, so that can be excused. There’s wood storage under the hut, the front door is high enough to not get too buried, there’s a trap door to the wood storage for when the snow is deep, the roof sticks out over the front door far enough to keep it from getting frozen and busted like most hut doors, and the benches even sit flat on the floor. 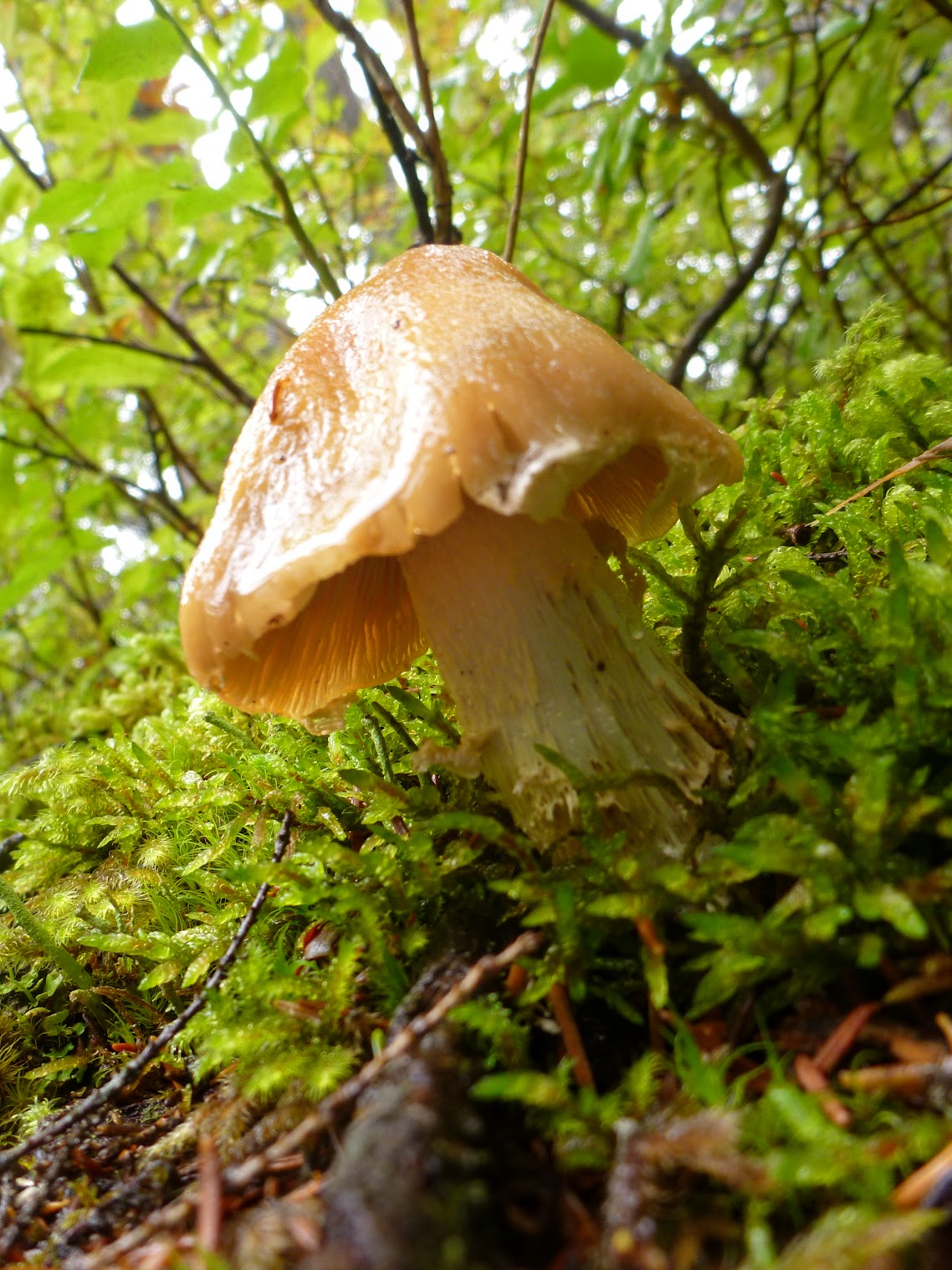 There were lots of mushrooms along the way. 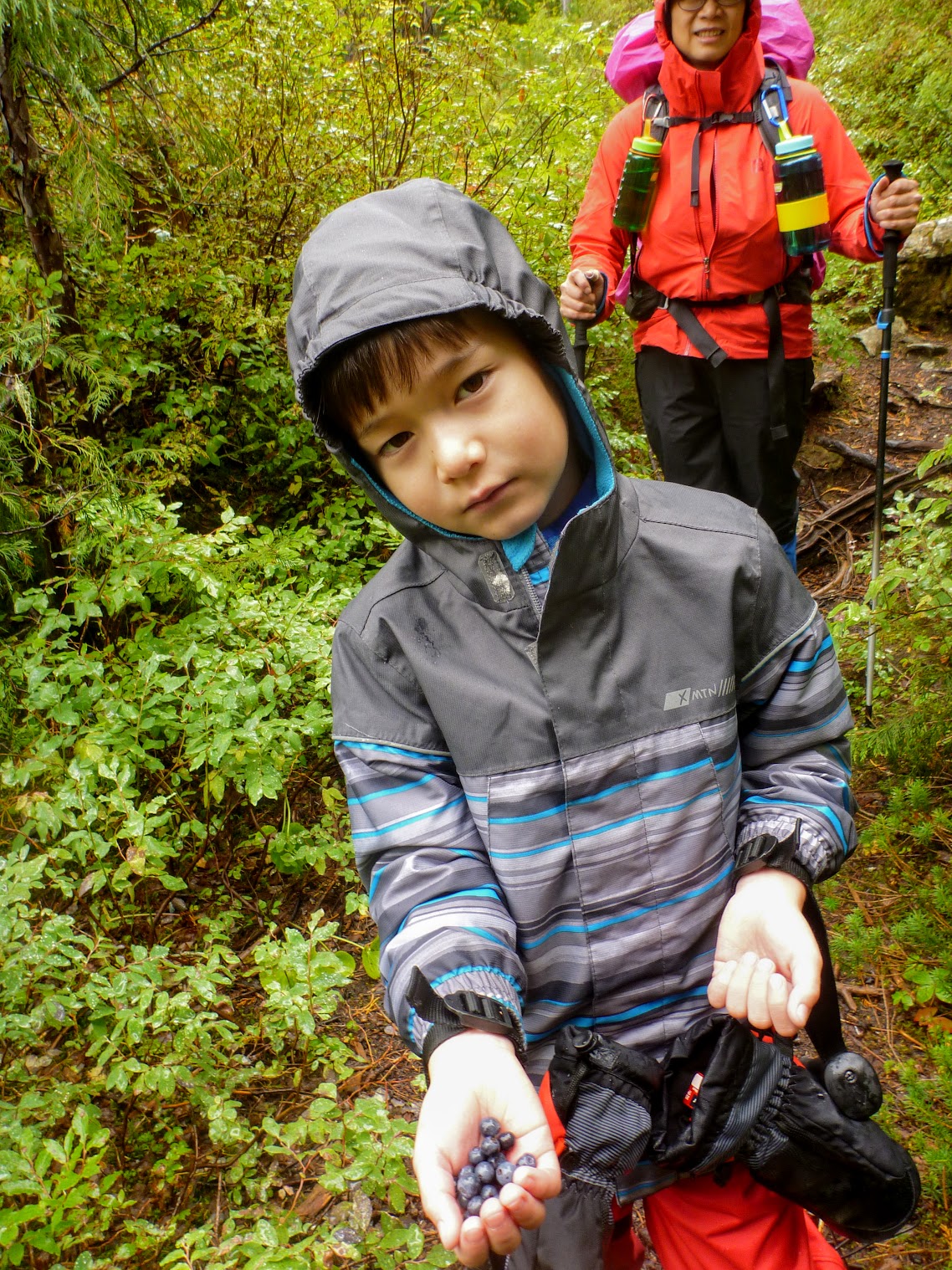 Ethan was a big fan of the blueberries even though they were past prime.

Moving to Edwards Lake Cabin was a nice pretty hike in moderate rain. The hut is built very similarly to Batchelor and appears to be maintained with the same care, but unfortunately for us animals had gotten into it. There were unwashed dishes all over the counter. One of the water pot’s lids was covered in this greasy, burnt, wax-like substance that took a protracted effort to clean. They left a bunch of mouldy buns in the cabin. There was a pound of dirt on the floor. There’s a sign on the side of the hut asking people to fill the wood box when they leave. This was of course not done. There was wax everywhere, almost like they were tossing candles at each other when they were drunk, which was probably the whole time. There was a can of lentils waiting to freeze and explode. There was melted plastic. There was a layer of filth on everything. Judging by the single playing card in the wood box, they burned 51 cards. Devlin was particularly irked by this as he’s a fan of cards.

There was also a fairly large bullet. When I looked up rifle gauges online, it seems that it was appropriate for bears.

We were getting near done the big clean-up when I noticed that there was something in the dark corner behind the sink. I gave it a poke with my foot and detected that it was furry, so I got my headlamp. It was a dead weasel. 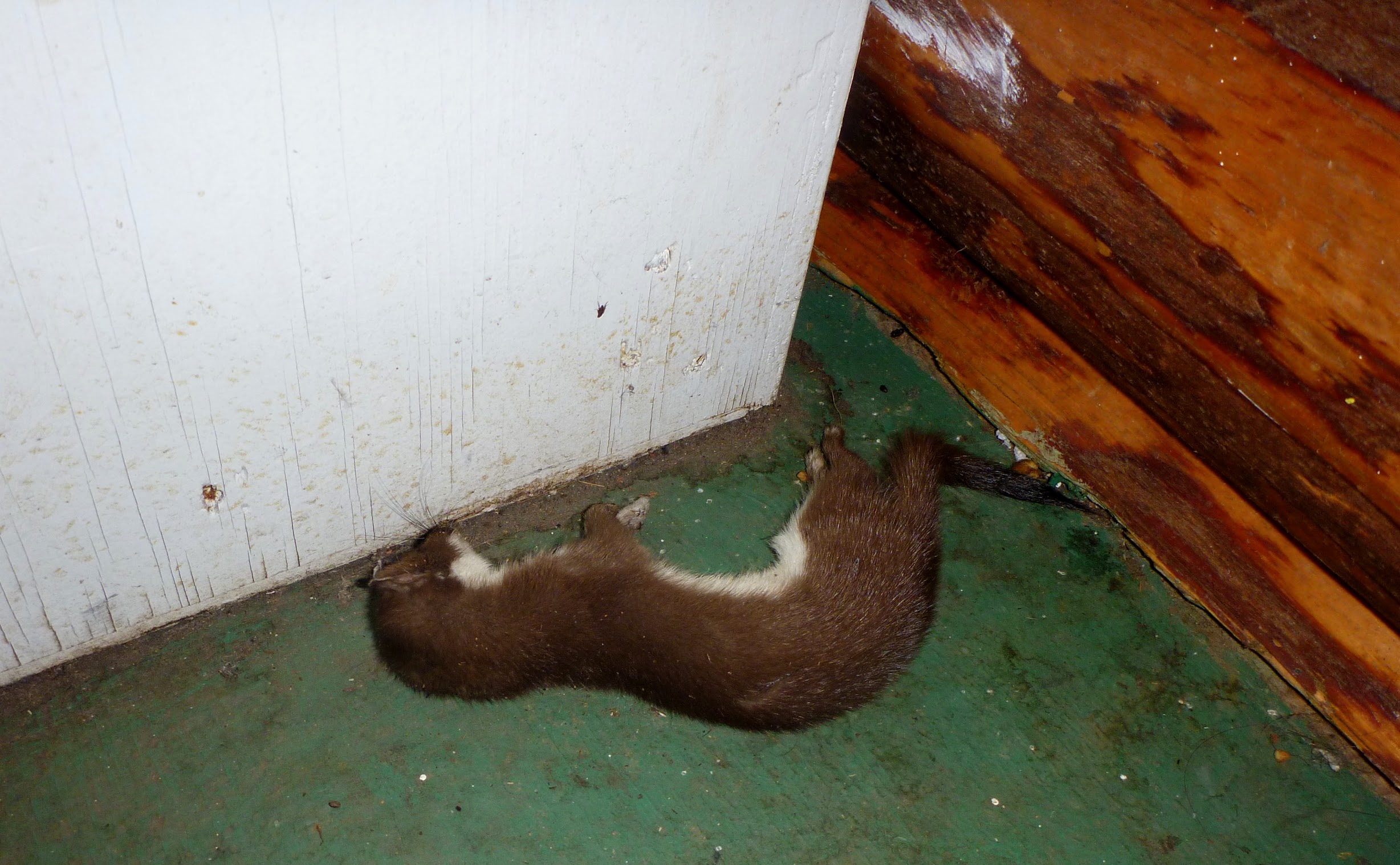 I fantasized about finding the people who left the hut as it was, knocking on their door, and when they answered, saying “Excuse me, sir, but I couldn’t help noticing that you forgot your weasel” and flinging it at them.

Back to reality, the only reasonable thing to do was to pitch the weasel far away from the hut. Leveraging previous experience*, I scooped up the weasel in a dust pan and hucked it south by southwest. Watching it arc through the sky was satisfying. 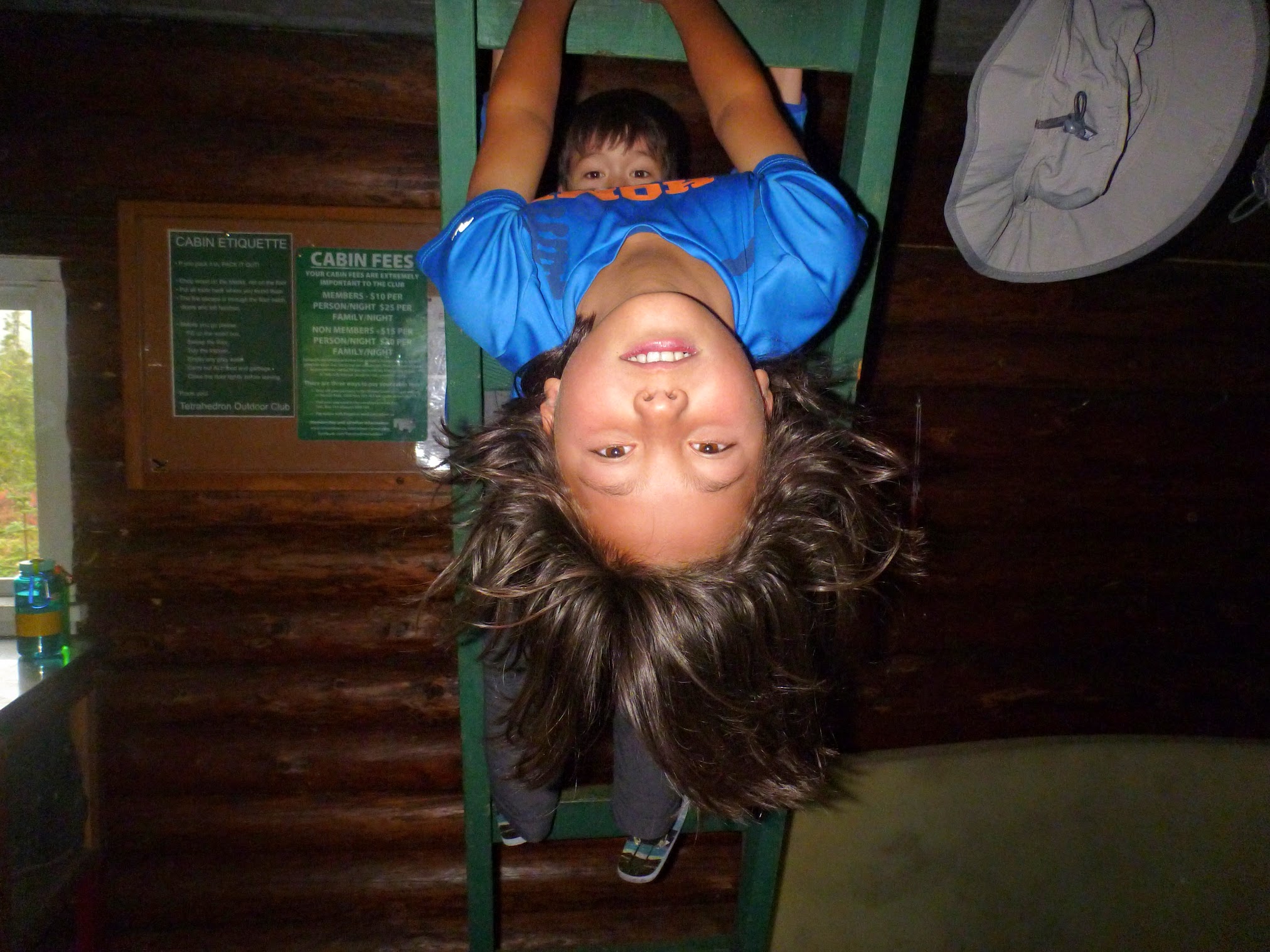 The kids liked the ladder.

We started discussing when to get up Sunday morning. What if it takes Ethan a long time to get up? What if we’re slow hiking? What about hut faff? Car faff? Full sailings? Anita set her alarm for 4:45.

After we tucked into bed, it started to rain in biblical proportions. I spent a lot of the night worrying about how Ethan was going to take it if it was still raining like crazy in the morning. The only other times I remember it being rainier was during the failed attempt on Mt. Waddington where I lost 56 lbs, the worst night I ever spent route cleaning on the Chief, the time Veenstra got hypothermic to the point of being incomprehensible in a kayak escaping from Wrottesley, and the Harrison Hut flood.

Both Anita and I were wide awake, I think from both the noise of the rain and the worry about Ethan, when the alarm went off. The morning faff was reasonably short, and we got on our way a half hour before the sun. 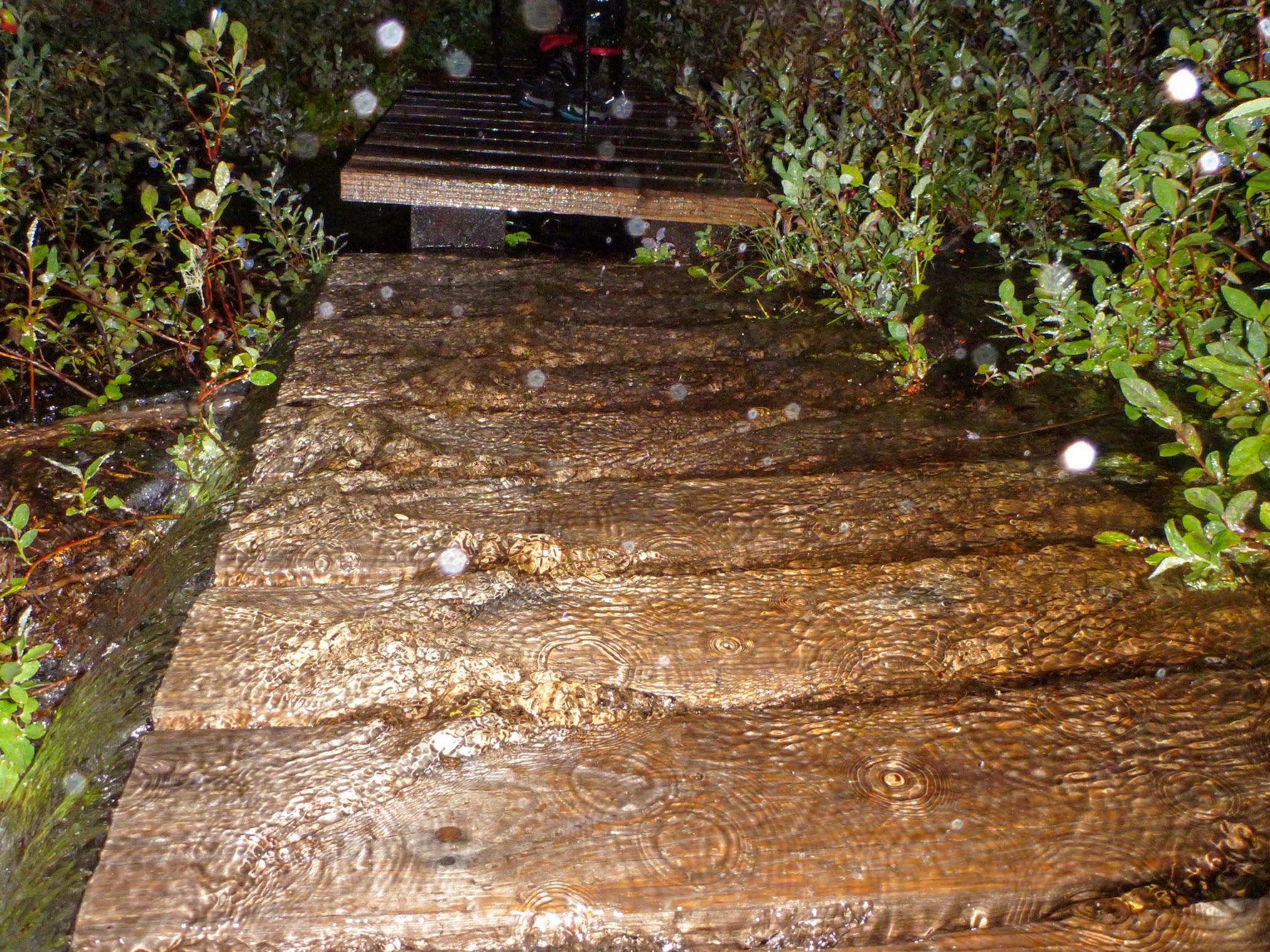 The boardwalk was wet. 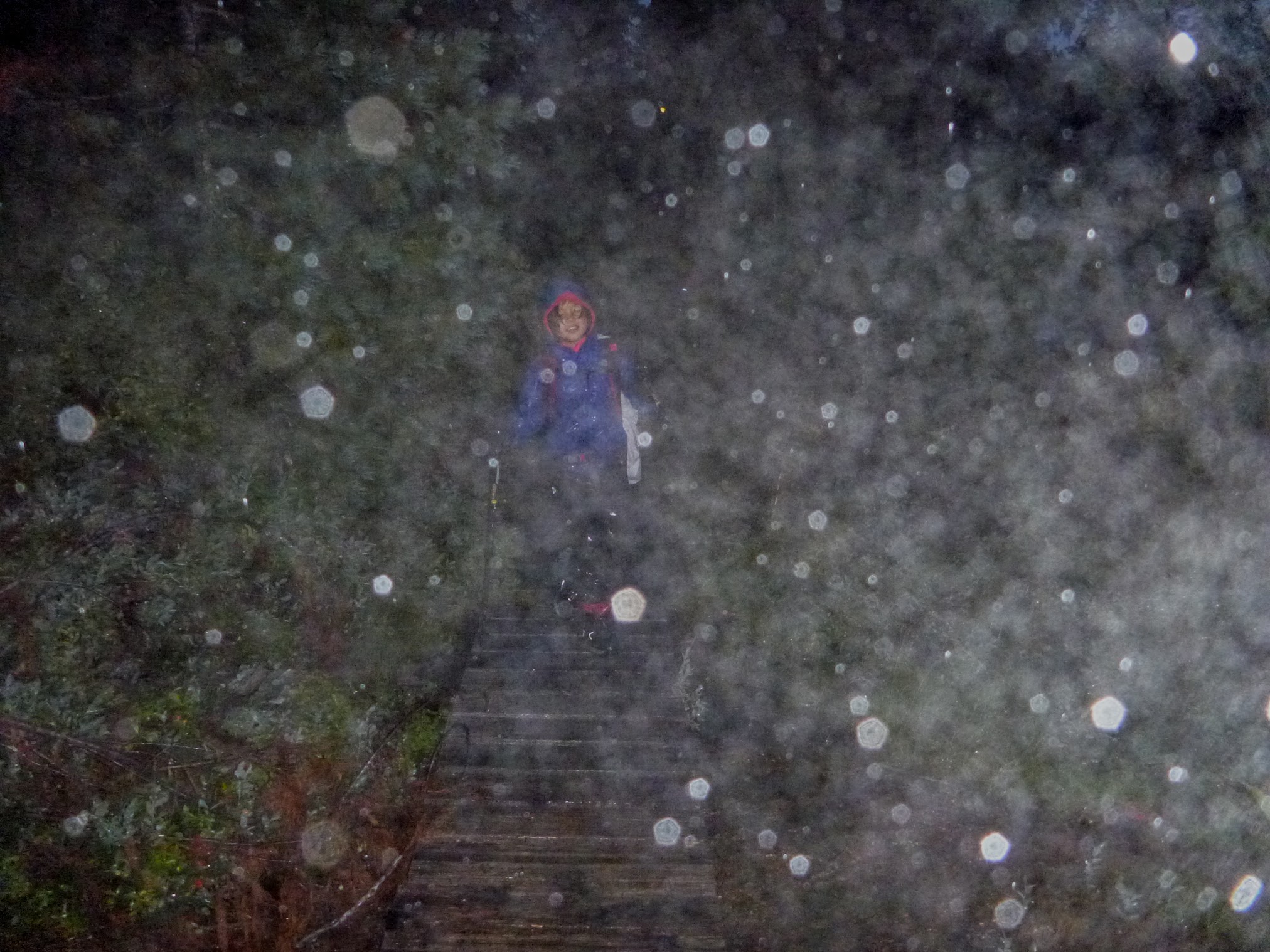 The air was wet. 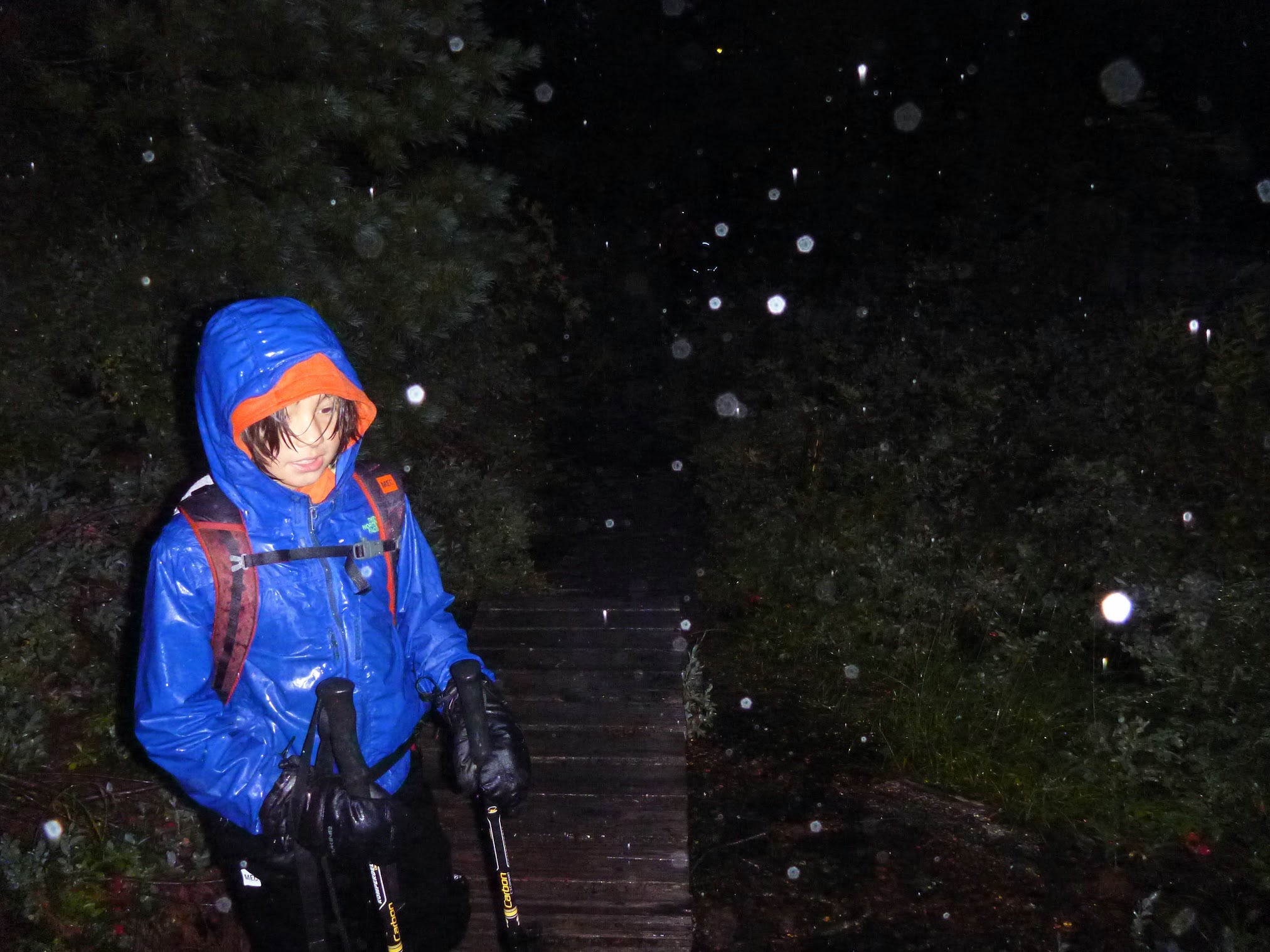 The Devlin was wet. 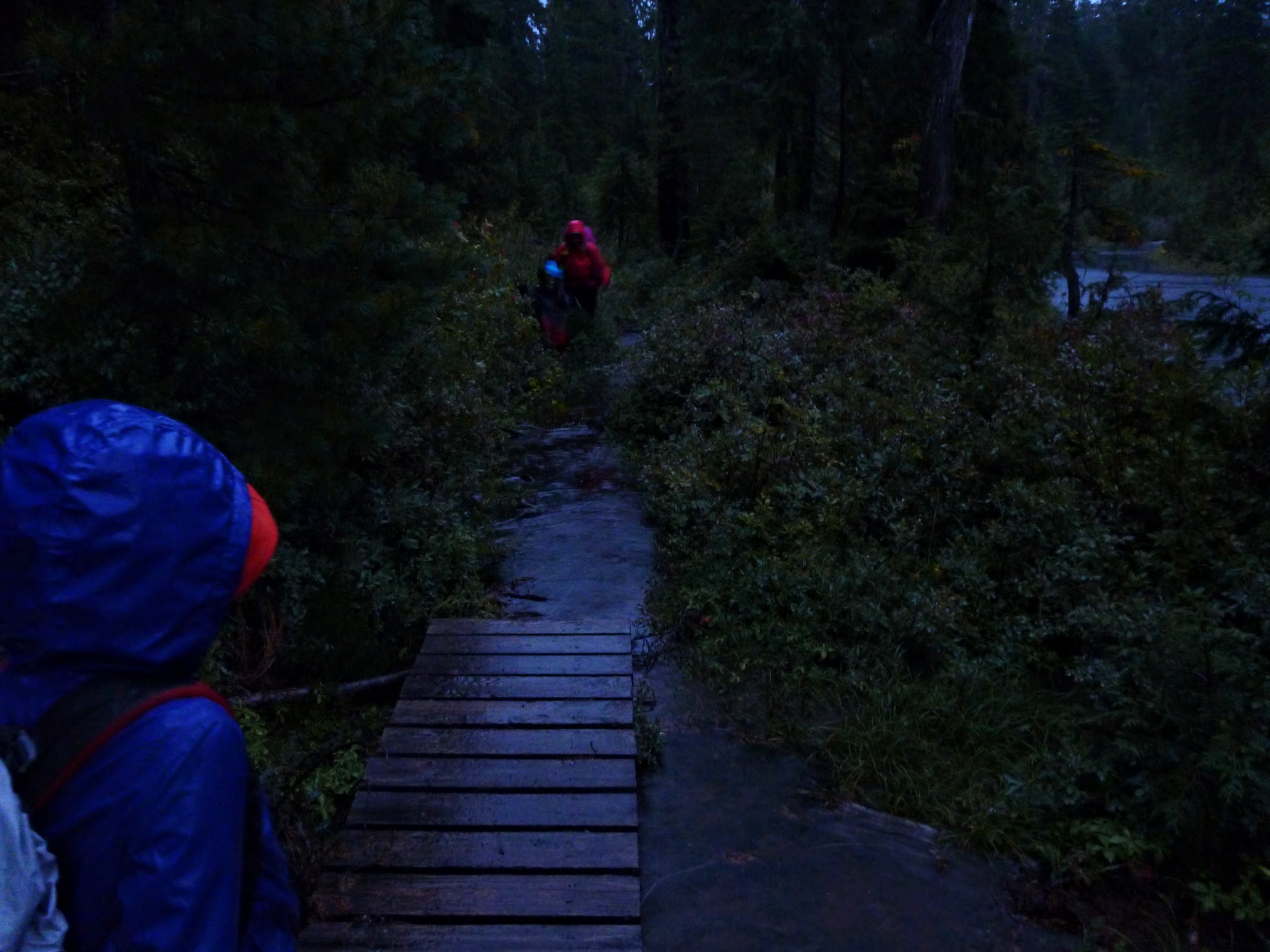 The trail was wet. 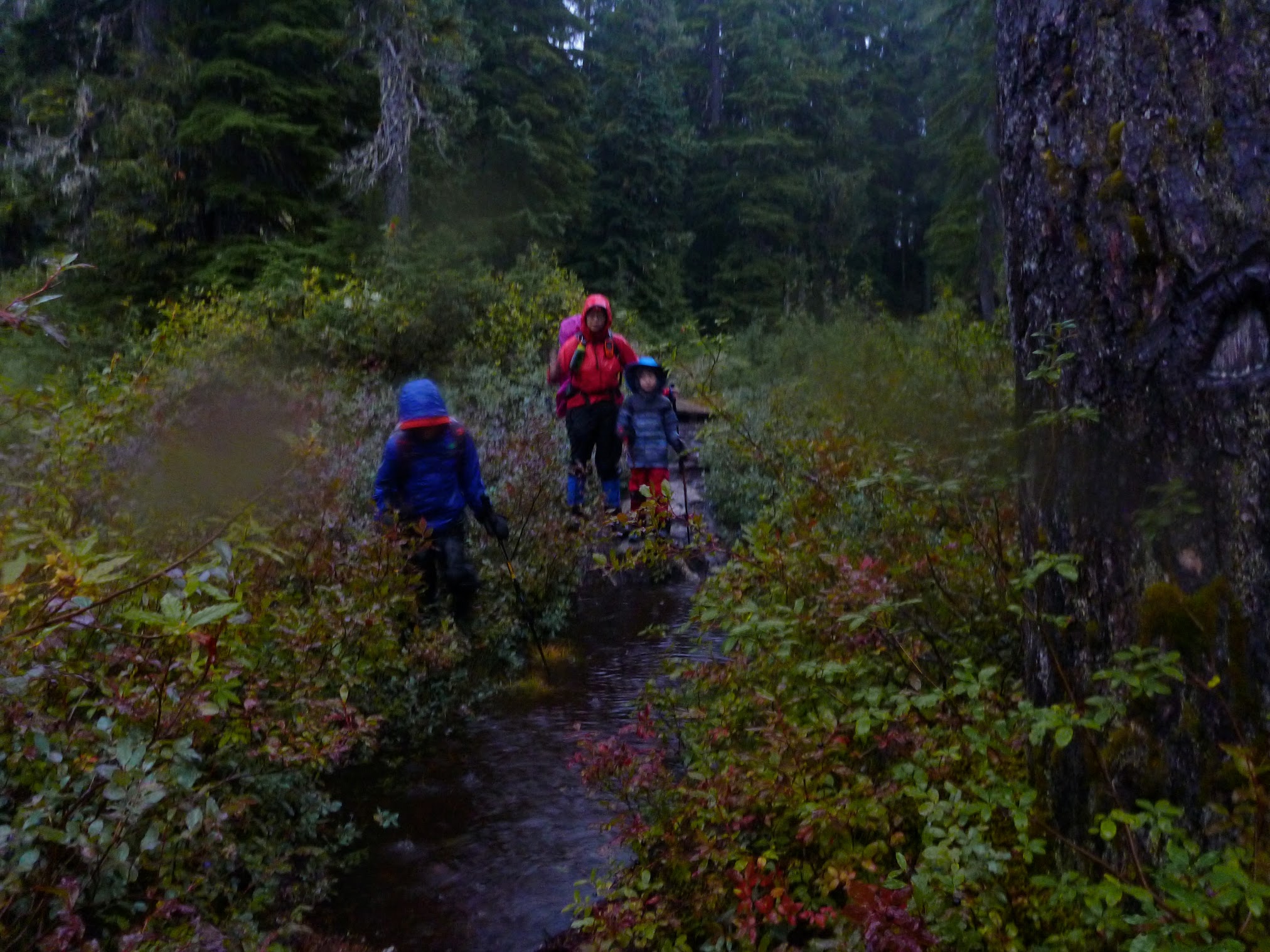 The water was wet. 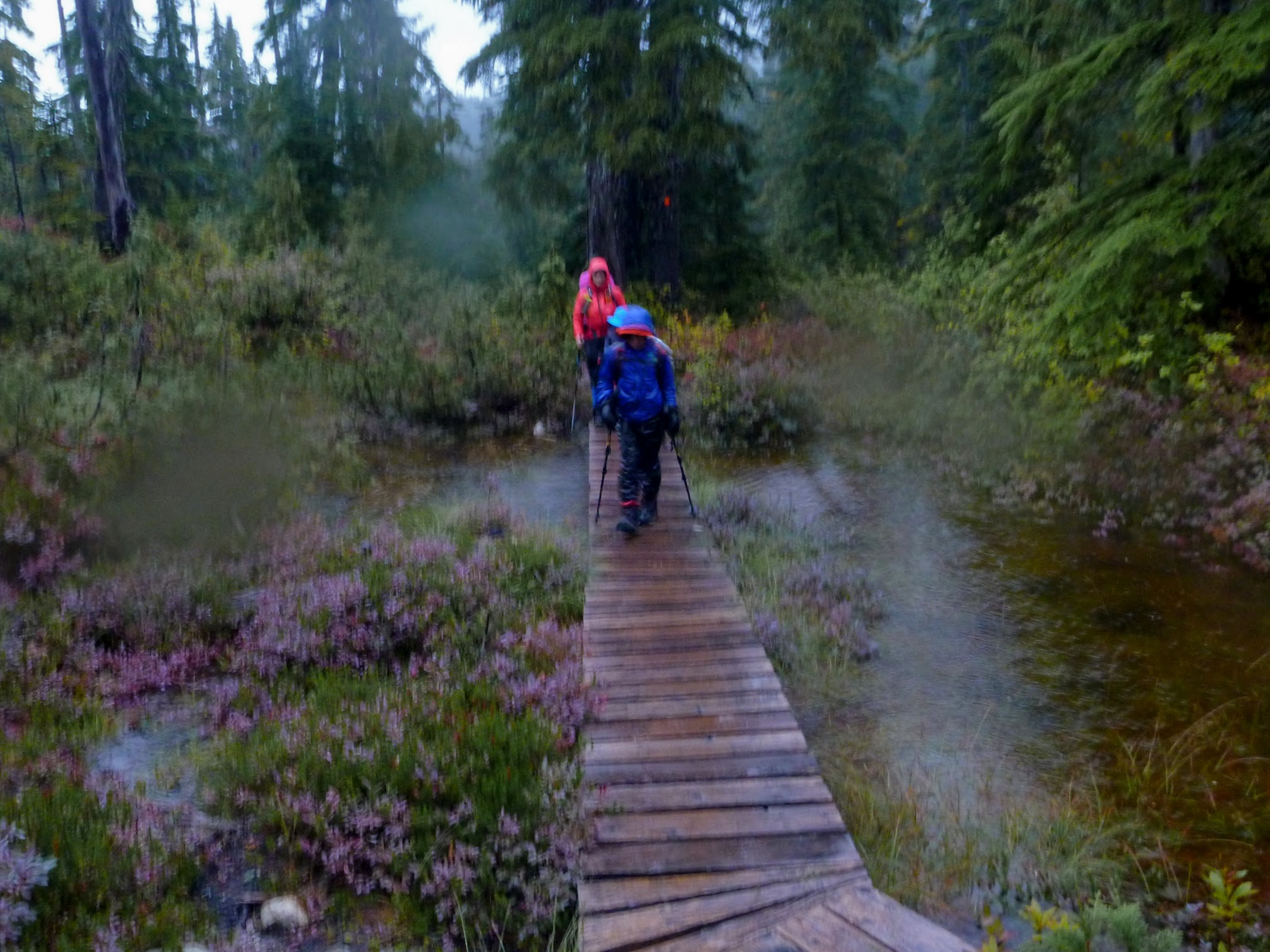 The section of boardwalk Devlin is exiting was entirely floating. Walking on it was like being on a dock in tidal waters.

*“Leveraging previous experience” is this phrase that appears in corporate reports. I think it’s supposed to make it sound like the author is doing something smart, but all it really means is that having already done more or less the same thing before and fouled it up, they’re at least not going to make exactly the same mistake. “Leveraging” is an interesting word. In this context it means using and seems to be implying something with some sort of mechanical advantage, but it doesn’t really. “Previous experience” is also good, because all of everyone’s experience happened previously, did it not?

Of course you’re probably wondering what previous experience I could be leveraging that pertains to launching a dead weasel into the hinterland,** so I will tell you. I had this dead pack rat that was on my friend’s porch, which had presumably been delivered by the cat. To make sure the rat wouldn’t be returned I endeavoured to throw it across the creek. I wanted to make sure it was well across, because no one likes their water to be flavoured like decomposing pack rat. I had it by the tail and gave a big swing around for a long underhand lob. This cunning plan failed when the tail skin ripped off on my downswing. The pack rat, with a skeletonized tail, went splat at my feet, and I was left with the entire tail skin in my hand.

**Well, probably not, but I told you anyways.

This entry was posted in Hike, Huts, Trip Reports. Bookmark the permalink.