Brew Hut is one of the VOC’s most popular huts both for VOC members and for the Sea to Sky backcountry community. It has a long history and the current rendition of the hut is the third attempt. So far, the hut seems to be doing exceptionally well and has outlasted the first Brew Hut which only lasted 2 years before needing to be rebuilt. It hasn’t quite outlasted the second Brew Hut which stood for 19 years (the current Brew Hut is on it’s 13th year). Who knows; maybe in the next 5 years we will be building our 4th Brew Hut, but hopefully not. 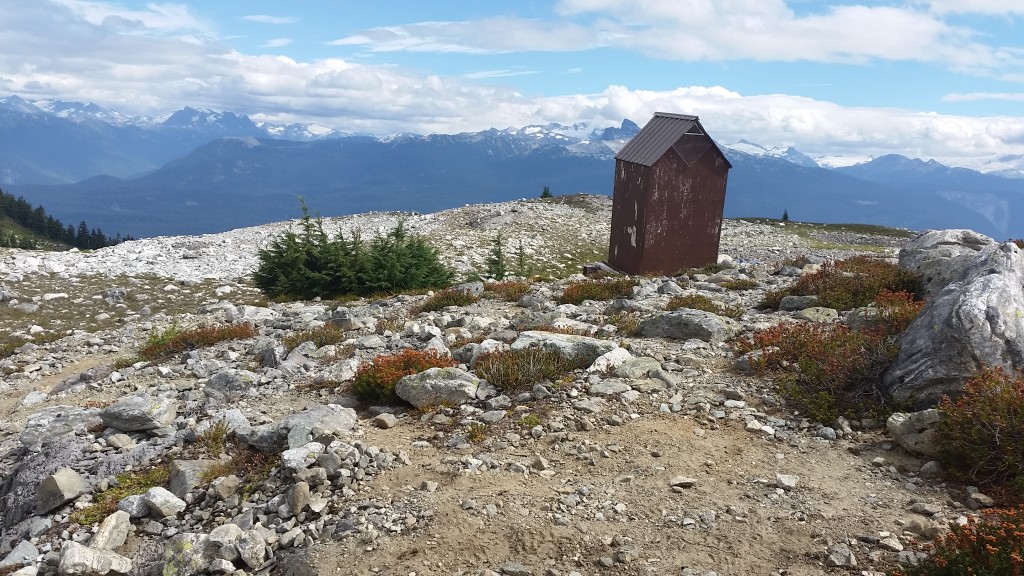 The old outhouse in its final days. Photo taken during Part 1 (yeah we wish Part 2 weather was like that). 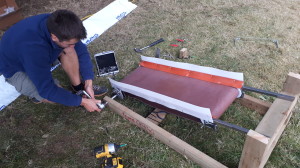 Edward making the final adjstments to the unit before completion. 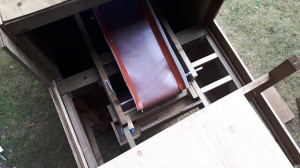 Looking down and the mechanical unit and the liquid waste collection while the toilet bench is temporarily off. 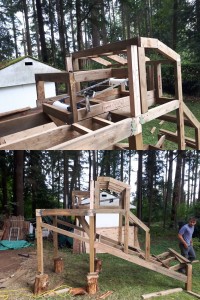 The bare frame with the mechanical unit in position. 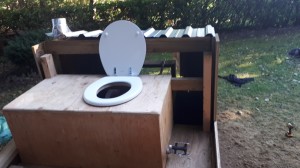 The toilet bench with the mechanical unit and bike pedal installed.

The outhouse at the current Brew Hut was built at the same time as Brew Hut the 3rd by Bill Schulz. It is quite the quaint structure and even boasts a stained-glass window courtesy of Carla Burton. You can read more about it’s construction here.  However, the whole outhouse as a system woefully tries to manage the popularity of the Hut and it’s pit small stature quickly reaches capacity. Brew Hut sits a top a rocky ridge and thus digging pits for outhouses has proven very difficult. As it stood, the pit only had a depth of about 12-18 inches into the ground. Furthermore, when digging out the pit, rocks would tend to fall into the already small hole and further reduce capacity. An open bottomed plastic barrel was eventually added and prevented these rock collapses. It also increased capacity by extending higher than the ground level. This solution caused other problems however. With the impermeability of the plastic, the barrel prevented liquid waste from escaping the system. Over subsequent winters, holes were drilled in the barrel to no avail. Over the winter these liquids would freeze and create a “poopsicle” that would not thaw until July. With capacity being reached in mid winter and our inability to maintain the outhouse pit due to it being frozen, the outhouse was in a critical state. Despite the VOC’s efforts to encourage people to bring up poop bags, this did not always happen and once the snow melted, one could find poop littered everywhere around the hut. Something had to be done and so the outhouse project began.

In March, we came up with preliminary concepts and submitted a grant request to MEC for $7,100. In June we received news that our grant was successful and so we began design work. Edward Lim spearheaded an initiative to create a solids-liquids separator and by mid July, began construction. It took about 200 hours of work for the design, construction and assembly of the solid-liquids separator with a final price tag of $1,600. Luc Harvey and I worked on the structural component of the project. The design work went until the end of July at which point we began construction.  The structure had a final price tag of $2,600 and took 14 full days of pre-construction in my backyard before it was ready to be loaded up into a truck and sent up to the hut.

The planning process for the first construction trip up to Brew began about two weeks prior when the pre-construction had reached a stage where all the major hurdles had been solved and the extended forecast gave us a good weather outlook for the Labour Day long weekend. The weather outlook was important because helicopters needs clear skies to run and the colder the temperature, the more a helicopter can lift. The forecast called for sunny skies and 18C, an ideal forecast that would give us a maximum lift load of 1600lbs. After taking with Ben, the Squamish Base Manager for Blackcomb Helicopters, I learnt that for staging everything from the 4WD trailhead the B2 Helicopter could do 4 full lifts on one tank of fuel. We could do more than four lifts, but we would need to organize and pay an extra $300 for refueling via a refueling truck and find a place where the helicopter could refuel (since the fuel truck can’t go up the 4WD road). Since the total weight of the materials for the outhouse had been estimated at around 2000lbs we didn’t really need the refueling truck anyways. 2000lbs is only 2 lifts worth of materials though, and it seemed a waste to pay for the helicopter to come all the way from Squamish only to go through half a tank of fuel. I decided to fill the extra two loads with firewood – however, I discovered that firewood happens to be a very fleeting material early September, especially when you want a full 3000lb seasoned cord. All the local firewood companies were sold out of everything until mid-October which wasn’t going to work considering we had a week now until the helicopter was going up. Eventually, at the very last moment two day prior, I managed to convince a small company I found on Craigslist to deliver a full truck load of firewood which they claimed was 2400lbs and three-quarters of a cord for $300. Oh, to say I was lucky might have been an understatement. My advice to future Hut Coordinators is to organize the amount of firewood you want from the local companies two months in advance – the last-minute firewood stuff I did almost didn’t happen because I didn’t. Also, that same evening I had been deconstructing the last parts of the outhouse, painting the ends of the beams with copper preservative (for rot protection). I ran down to Rona earlier to pick up another quart since I had run out earlier, but unfortunately while working on it that evening a piece of wood fell over and knocked over the whole can. Sadly, Rona had already closed for the evening, so I would have to wait for Saturday morning to finish. Also of note, no one anywhere carries plumb bobs, so if you need a plumb bob, don’t leave that to the last minute either.

We are just getting started! Continue with Part 2 … 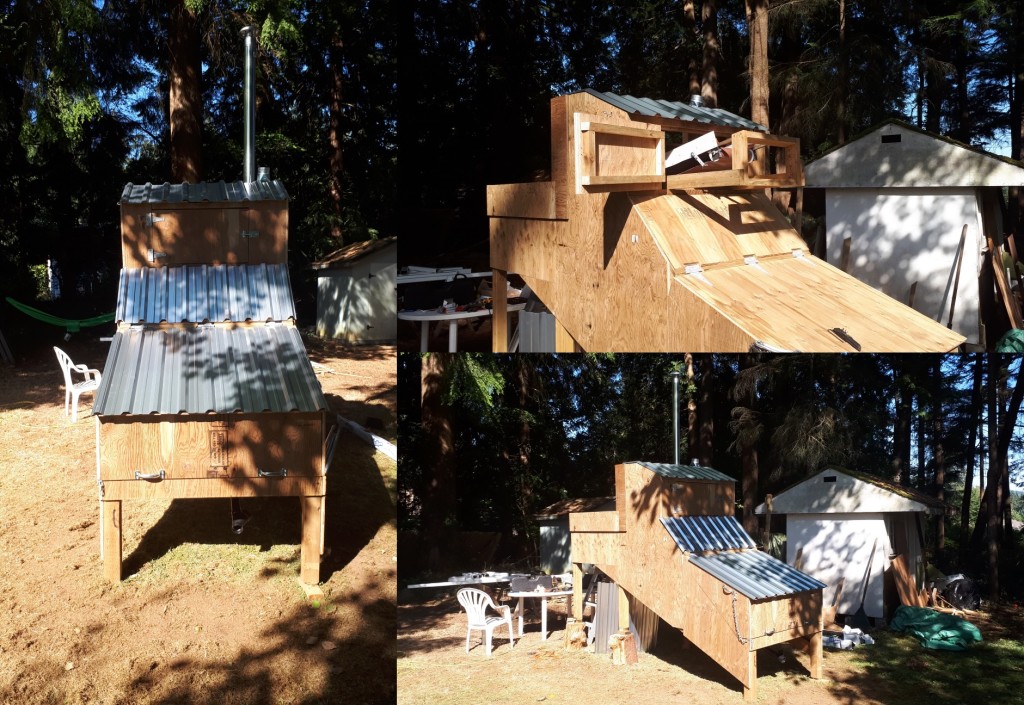 The completed structure in George’s backyard. 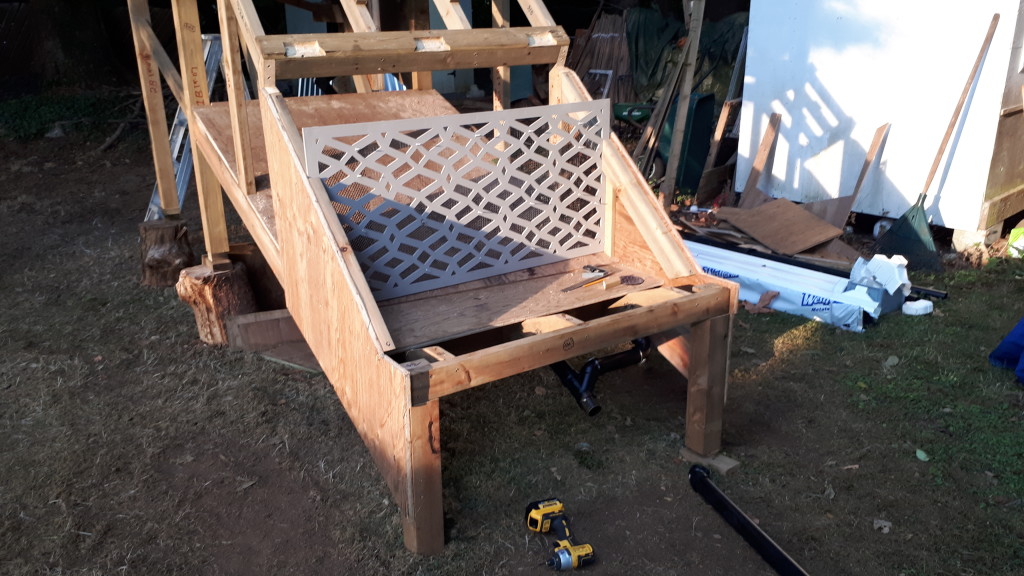 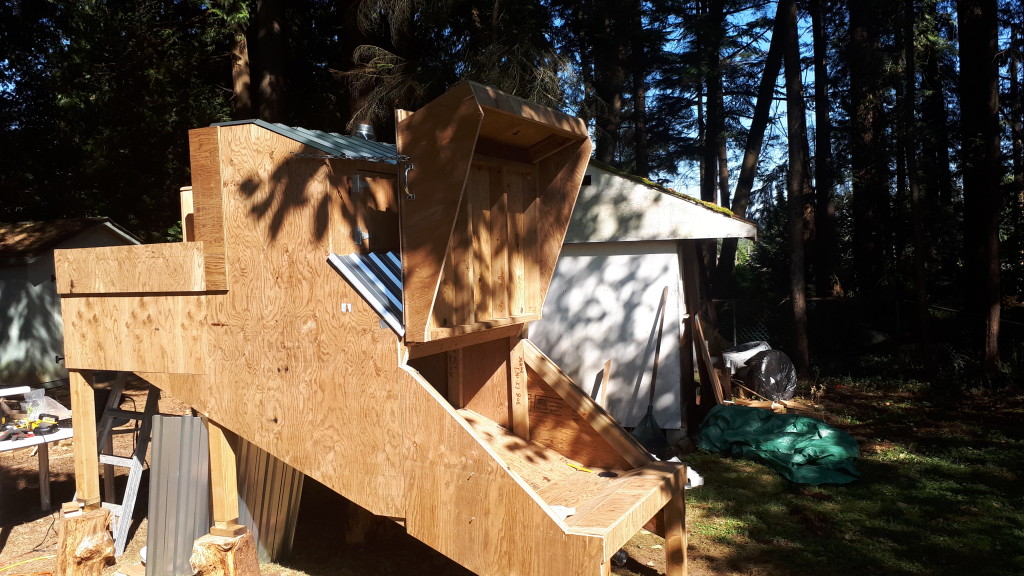 Demonstration of opening the back hatch back during preconstruction.

PJs are the bomb, Instagram is a waste of time. Snow all winter, Water all summer. Huts Coordinator from 2016 to 2018.
View all posts by George Hill →
This entry was posted in Huts, Special Reports, Trip Reports, Workhike and tagged Brew Hut, huts, outhouse, Workhike. Bookmark the permalink.