We gathered at the Cambie Creek car park of EC Manning Park, stretching our legs after the lengthy drive. Spirits were high and we were generally appreciative of the decent weather that greeted us – light snow with good visibility. As we prepared our equipment, strapping skins on for the first time in our lives, Krista and her partners Piotr, Nicole and Ryan, shared enlightening efficiency-maximizing tips which we absorbed enthusiastically. Krista briefing us at the carpark

And so we began skinning up the trail. We quickly settled into our respective comfortable paces, tweaking and experimenting on technique along the way. I enjoyed the rhythmic shuffling and moderate effort required to follow the person ahead. It felt really good until I started heating up. Despite being already down to just two layers, I was soon uncomfortably soaked in sweat. When we stopped to regroup, I almost immediately felt the chill return. Temperature regulation was my biggest challenge on this trip. It ranged from teeth-chattering shivers and painfully freezing extremities to boiling warmth emanating from the core. 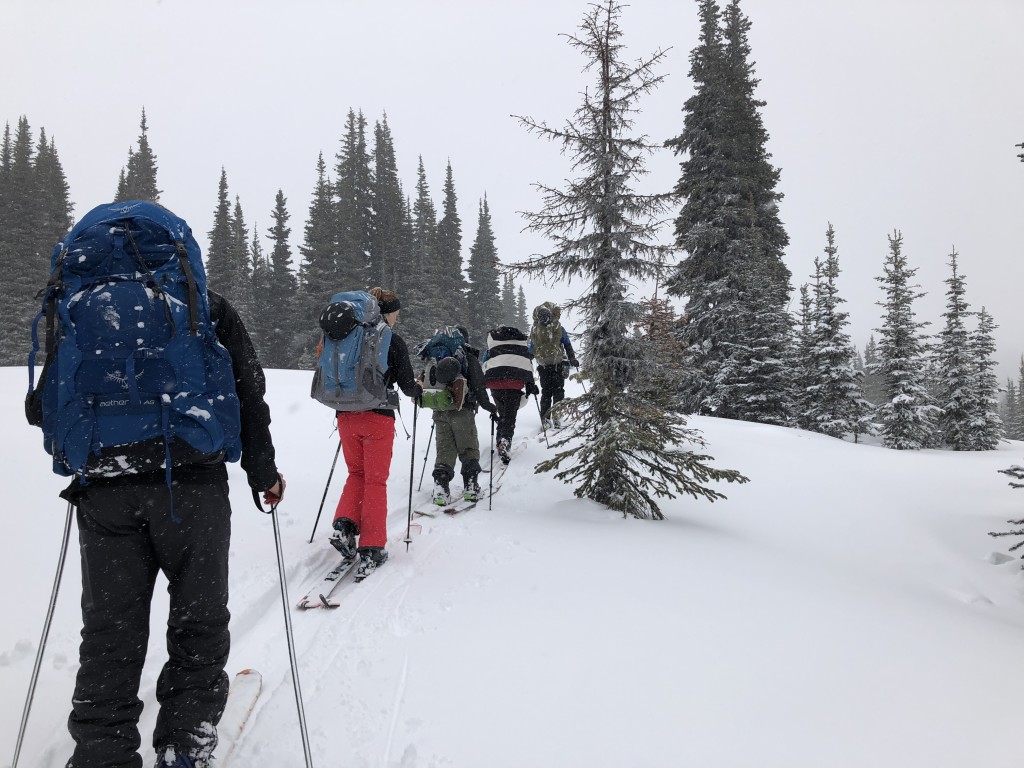 8km later, we arrived at our campsite. Piotr, smiling widely, quickly marked out a kitchen area and gave us instructions to set up camp. He struck me as possibly the happiest, most enlightened guy on the planet. Snow digging was an extremely satisfying process, an upgraded version of sandcastle building. Piotr got to work real quick, setting up a snow-brick ‘quarry’ where we mined bricks to build a wall around the dining area. It was a master piece. 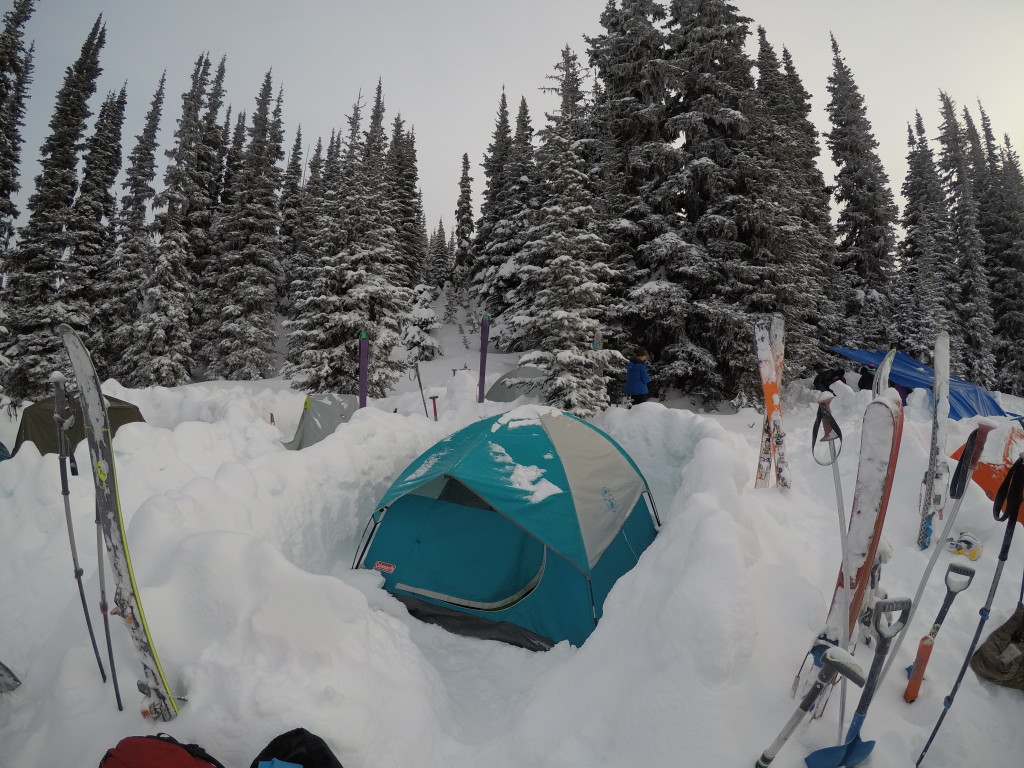 We dug pits to shield our tents from the wind. Photo by Emma.

By the time we started cooking dinner, it was dumping snow. Fine, dry powder wafted down from the skies covering everything as we ate. It was then that Piotr our hero revealed a massive tarp which he had lugged up the mountain for us. Setting it up above the kitchen area trapped heat and shielded us from the wind and snow. We also huddled together to conserve heat. It felt like home. Cinnamon whiskey was briefly handed around, followed by a pot of melted marshmallows and chocolate. Good vibes all around. 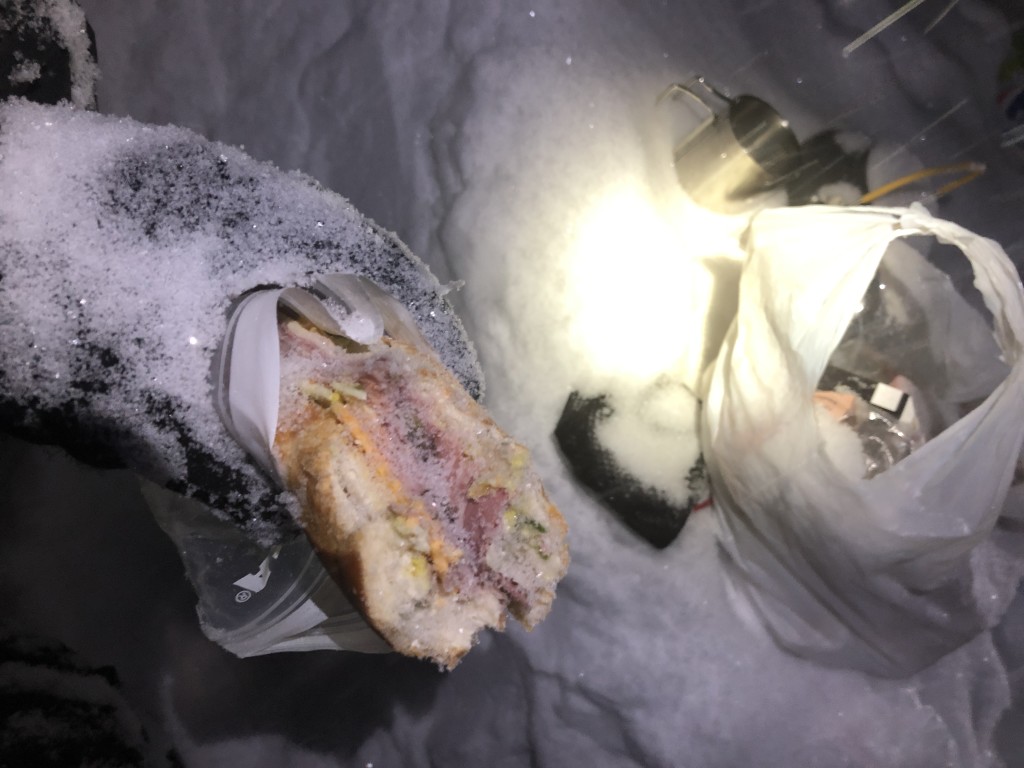 Before the tarp was set up, pow rained down so heavily that my sandwich was covered in snow between bites. 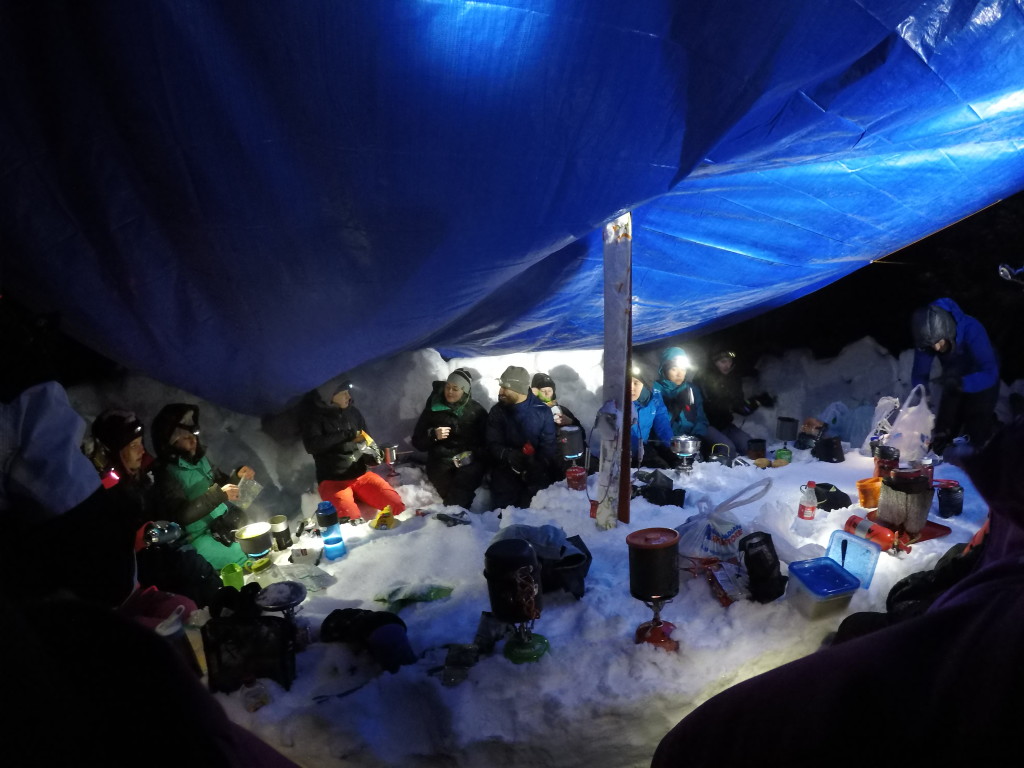 We fell asleep to the patter of snow on our tents and the confidence that the slopes tomorrow would be covered in prime powder.

Stepping out of the tent the next morning, we were greeted by blue skies and unlimited visibility. A vast mountain range all around revealed herself to us. Jagged peaks stood out prominently in the distance while rolling hills filled in the terrain as far as the eye could see. Carrying only essentials, we continued uphill for a little while more before we ripped off our skins and rewarded ourselves with the freshest tracks ever. While waiting at a regroup point, Piotr gave a brief introduction to digging and evaluating of a snow pit. He identified the weak layer at about 60cm depth which was mentioned in the avalanche report. Interesting! 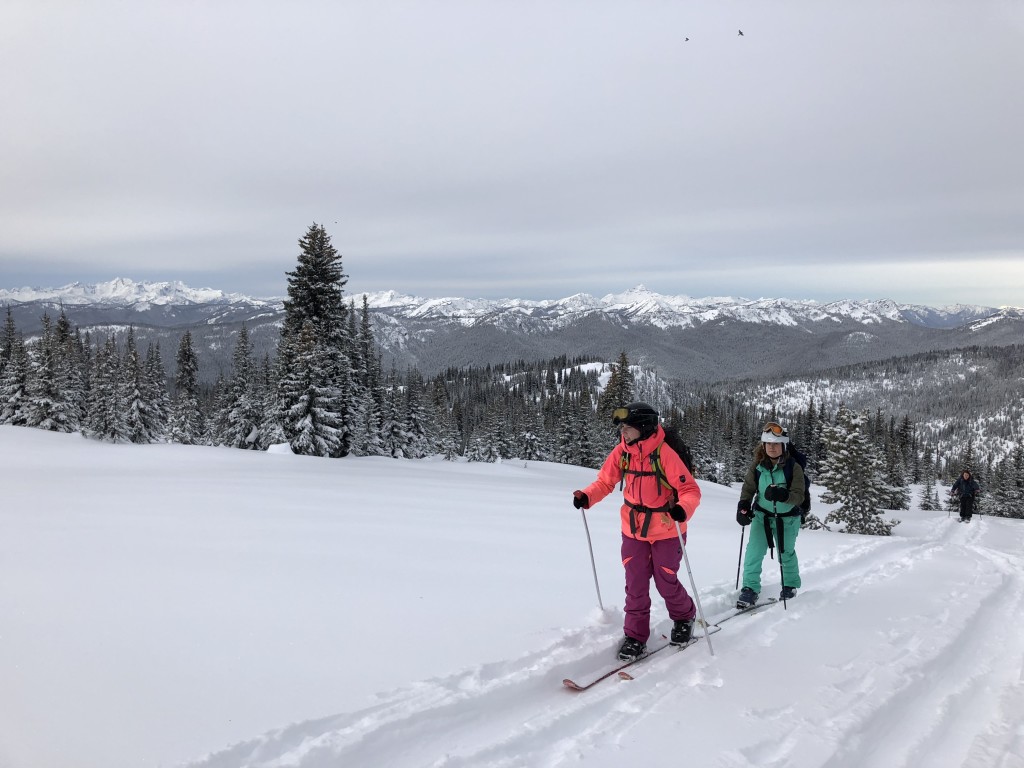 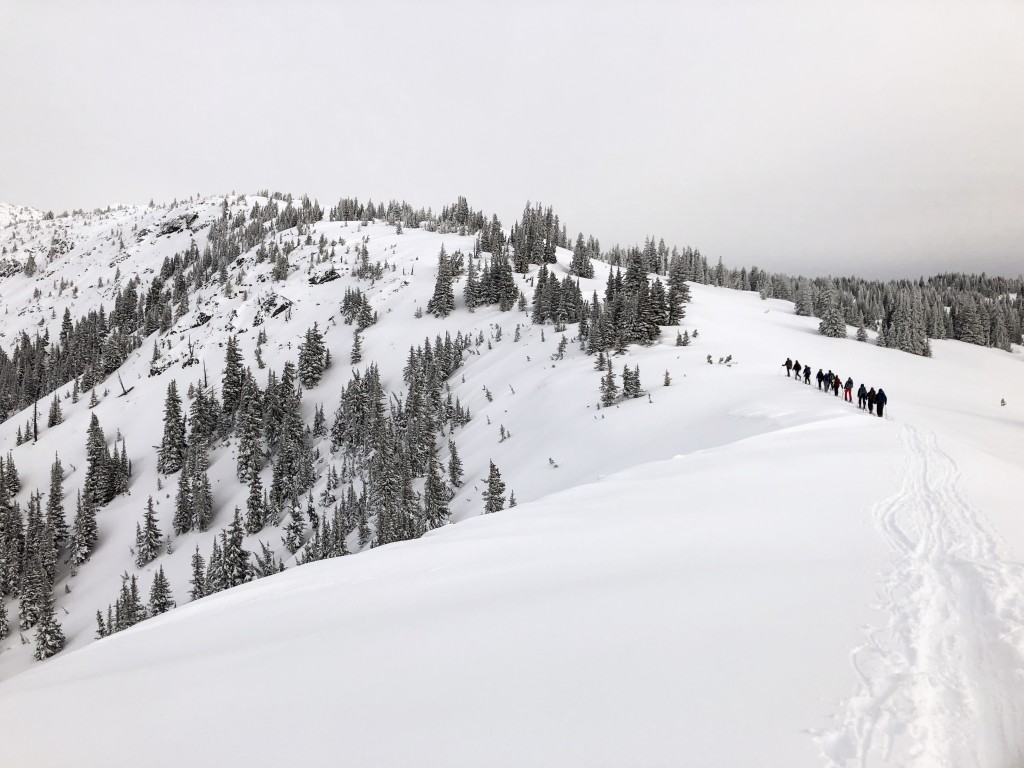 Skinning up in search of nice runs. Photo by @changcj_

Taking turns to ski (for safety) invoked a great feeling of community not present in a ski resort. It’s just different waiting patiently for your turn and ooh-ing at the smooth carves and showmanship of your fellow skiers (and splitboarder) one at a time. Super chill. Me jumping into paradise! Photo by Karin. 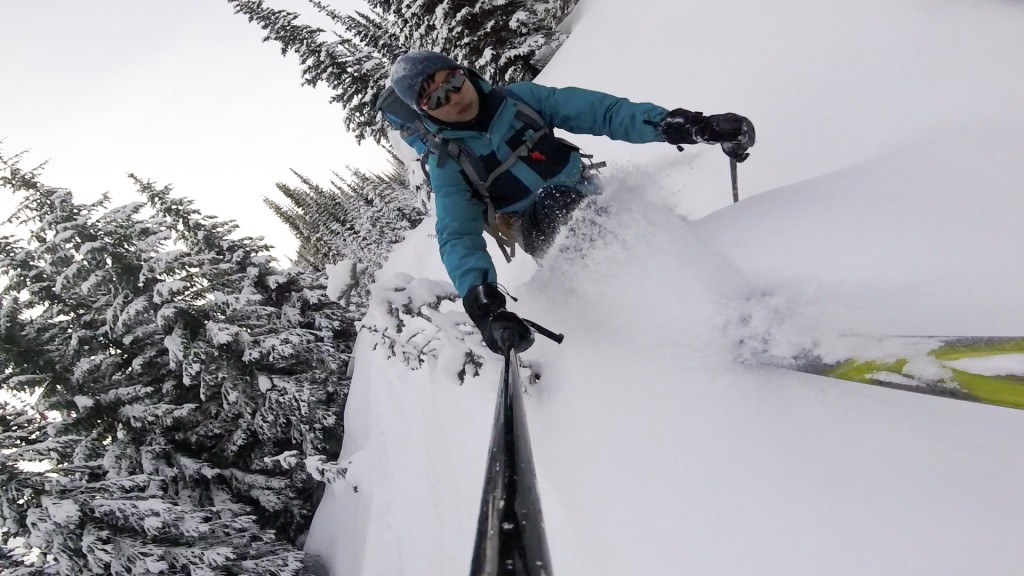 We are all extremely grateful for the guidance of Krista, Piotr, Ryan and Nicole for spending their weekend with us, sharing their expertise, and looking out for all of us. Everyone knows they could’ve been shredding real gnar on this bluebird weekend, but chose to share their passion with us instead.

I am most certainly inspired to take on the official Avalanche Skills Training course and to pursue steeper slopes! 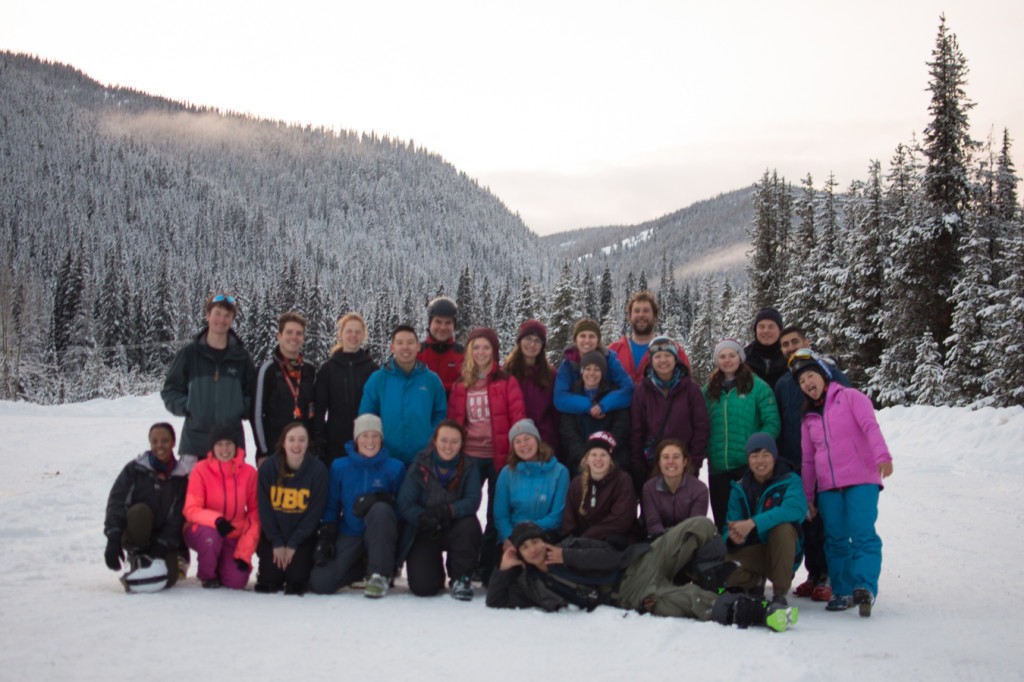 Photo might be blurry, but the smiles are clear

One Response to Introduction to Backcountry 2019