Posted on April 16, 2019 by Noriko Okamoto
I was curious about the road condition of FSRs leading to Meager Creek / Harrison Hut / Pemberton Icecap. So I decided to go take a look. Well, not quite to the hut, but to the pools.
In short, (1) the Lilloet South FSR is partially plowed; (2) the snow travel was annoying and time-consuming; (3) the new Meager South FSR is currently sketchy between Km 25 and 27; (4) there’s (at least) a bear in the pool area.
Long version:
I parked at the km 2 gate on Friday around noon. I found a worker for the logging company, who was fixing a big excavator of some sort. He told that the road was plowed to km 12 or so and that they start working on fixing the road starting on Monday after (April 15). I’m not sure which road/branch he was referring, but a lot of things seems to be happening around km 12, on a branch emerging from there towards the hill.
From km 12 to km 25, there’s nothing much going on. The snow travel was annoying in that the consistency is uneven due to the compaction by old snowmobile tracks (a lot of them). Friday was sunny and warm, which made the snow slushy. I made slow progress of average 2km/h on snow (in comparison, 4km/h walking on the plowed section). At some point, I had noodle and tea for supper and kept skiing till t the 2wd parking lot, where I pitched up my tent and sleep.
Saturday started with a misty rain. It’s only 8k on the logging road, so I snoozed a bit, but eventually emerged and start skiing. Between km 25 to km 27, the road was awful. It was filled with slides everywhere. 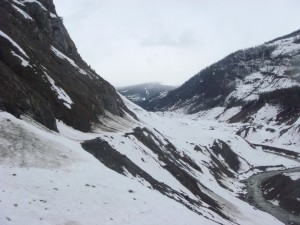 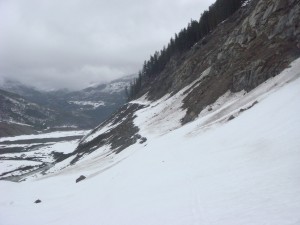 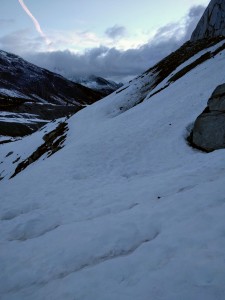 I’m not sure if it’s just snow or mud/landslide. I guess probably it’s both. Also, I’m intrigued by the sheer volume of water coming from the excavated wall – the water that was once used and retained by trees are now running directly on the surface and bringing loose soils and big rocks all over on the road and eventually down to the valley bottom. Some big rocks are held by little patches of snow crust for now, but will soon give once they are completely melted. 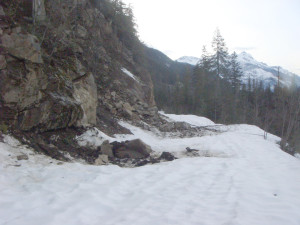 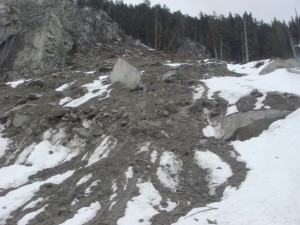 I found it sketchy to cross as there’s quite an exposure at places, and sliding down to the valley bottom would be painful. It was ok for me this time as I crossed the section during the morning both in and out, and I only had a weekend pack. I also wonder how many years the new FSR stay in shape/passable, given the instability of the area and the way they carved the road.
I arrived at the pools around 3 pm, after an hour of searching the trail to the pools. Soaked for an hour or so, munched trail snacks and I start napping in the changing hut. At some point, I heard some awful noise followed by the sound of heavy rain. There was an intermittent rodents’ noise, too. But I ignored them all, skipped dinner and slept in the changing hut.
Next morning came around 3 am. There’s a long way to be traveled to reach the car. I had a warm meal (rice and tea), packed and started skiing through the forest back to the logging road. Then I found a series of fresh bear prints ON my ski tracks from the day before. So they’re as fresh as they could be. I also noticed the pile of snow that was on the garbage bin (it seems some people are using as a food cache) earlier was gone. The bear might have figured out how to open it…? 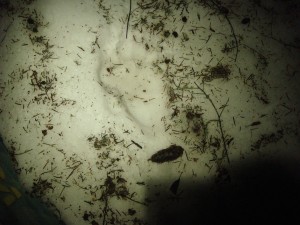 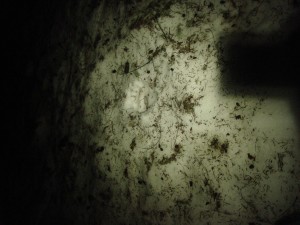 Anyhow, once on the logging road at around 5, the way back was uneventful. I saw some animal prints on the snow. 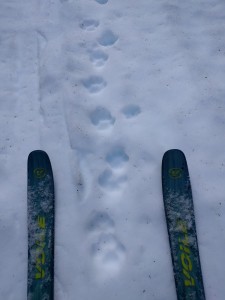 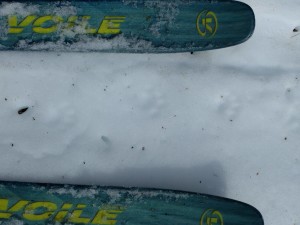 I skied 20k, walked 7k, and encountered a track with a family of 4. They were kind enough to give me a ride for the last 3k. They had a key to the gate. I don’t know how come they do. Maybe they work for the forestry authority or logging company. I didn’t ask, as that was not my scope at that point. I chatted for 5 minutes, thanked the family at the parking lot, ate a grapefruit and drove to home.
This entry was posted in Hike, Ski, Trip Reports. Bookmark the permalink.