On March 22, a group of VOCers got together, thanks to Glen, to have a nice and relaxing weekend skiing in the mountains. Friday arrived, and after a week of hard (?) work, we departed at 5:00pm to have a night of soak in the Skookumchuck hot springs.

We got transported to the hotsprings by Jibby-jibby —a 4×4 old Jeep with character that will only play Cheng’s CD’s collection (Maroon 5, Westlife, Taylor Swift, and an American cover band keen on patriotic American songs). Jibby-jibby is a bit flaky playing music so eventually, the CD player stopped working (yay?) and we could only tune a classical music station —I was quite happy ‘speeding’ through the off-road section on a 4×4 with classical music.

When we got to the hot springs we set our tents and rushed towards getting some of that promised soak. Other VOCers were already there keeping the springs warm for us. And, as VOCers do, we all wanted to be together and managed to get a ridiculous amount of people in the same tub ‘sardine style’. All the excitement made us go to bed late but relaxed.

Saturday morning came and the chill vibes were still up; most went for a second soak and a few had an extended brunch. Cheng showed a few of us how to have a breakfast of champions that also provides sufficient training to be an astronaut. “It is simple —he said while adding water, prune extract, vitamin C powder, vitamin D and protein powder into a container— I just mix everything together and then I don’t have to worry about my nutrition.” He then proceeded to grab a fist full of avocado oil pills and, with the help of his mix, swallowed everything all at once —I was impressed. 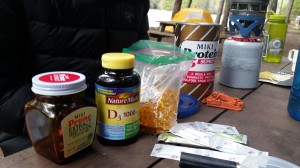 Eventually, it was time to leave and head to the trailhead for the second part of our trip. The climb to the hut was very short and straightforward. At one point Glen told me we were missing 300 meters to the cabin. I assumed he meant elevation but he actually meant distance. 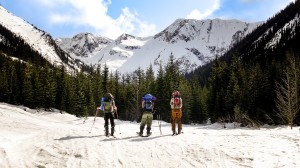 The stoke grew when we realized the hut was all for ourselves! A few started to cook dinner while others initiated a stretching session on the upper level which soon became a massage train. However, the smell of mulled wine, prepared by Glen and Felix, brought the rest of us downstairs. After a few cups of wine and alcoholic oranges, Kuan took the stage and taught everyone how to fold climbing skins efficiently. Later, Glen grabbed the guitar and improvised an epic song for the night. Everyone made it to bed at around 10:30pm with the plan to be ready to go at 8:00am.

I woke up at 8:00am and somehow everyone else was still asleep. Slowly everyone made it out their sleeping bags, had quick breakfast and got ready to do some skiing. Alastair’s group headed up first and Glen’s group followed. Slowly but steady we made it up through the switchbacks. Isabel, having brought VOC skis and skins, had the best time of all of us sliding backwards. Eventually, we got above the treeline and everyone’s stoke voted to go up to the ridge. Isabel needed to meditate —and probably swear at her skis and skins— and decided to wait for us. 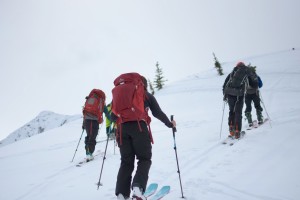 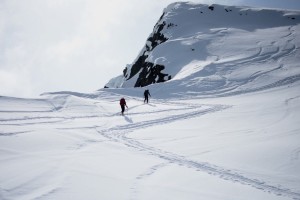 On the way up we saw, on a section of the ridge on our far right, Alastair’s group entering a couloir —awesome! And our group made it pretty quickly to the ridge. We had a great lunchtime where Cathy’s creative mind combined my dried ginger and cheese to create the best snack. We also had the traditional summit Toblerone and proceeded to head back down. 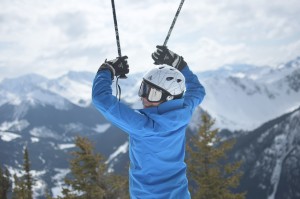 Everyone made it down with style, however, I am a snowboarder that switched to skis 3 weeks before the trip, hence, I made sure to entertain everyone with my ungraceful falling while making Felix cringe about my body positioning. I was pretty happy

Thanks, Glen for organizing a fantastic chill weekend and encouraging me to take the skis 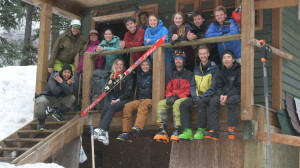