The time is ripe for the Outrigger-Clarke traverse

For the past couple years, access to the horseshoe traverse over Outrigger Peak and Mt John Clarke has reportedly been quite difficult. Without being sure of all the details, it seems that the road was overgrown, there were a few landslides, washouts, and most of the Elaho Valley was torched in a humungous fire. Anyway, good news: access has been restored with less bush at the start as a result of the fire (at least for now…)! This trip is so stunning that it’ll be super popular again very soon—it’s like the Spearhead traverse, but on foot. Wow. 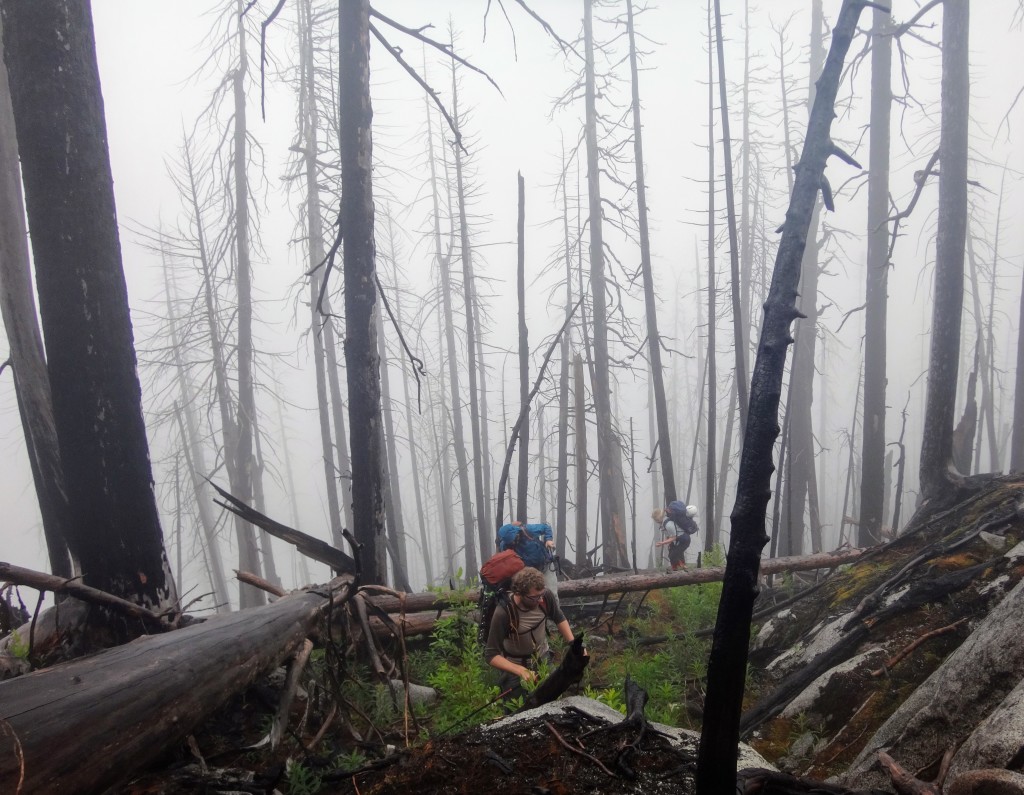 Burned forest in the Elaho Valley on the hike up.

Ross Campbell, Richard Shaw, Birgit Rogalla and Vincent Hanlon set out from Vancouver a little later than usual because Richard thought that 6:10 was a “crazy early” pickup time. We argued that since we were doing a 2-day traverse in 3 days*, we had time. We drove 3-3.5 hrs to the top of the spur road on the Outrigger side, were greeted to the start by a bear, and hiked up through burned forest into the clouds. A few hours of slogging later, the rocks had mostly disappeared into the snow and the snow had mostly disappeared into the fog, so we stopped. Because we had time to spare, we spent literally 2 hrs deciding whether or not to camp or to continue. We chose to camp early, and spent the evening watching the charred valley reappear as clear skies slowly prevailed. 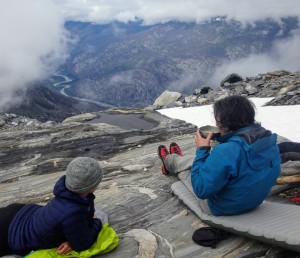 Looking into the valley through gaps in the clouds 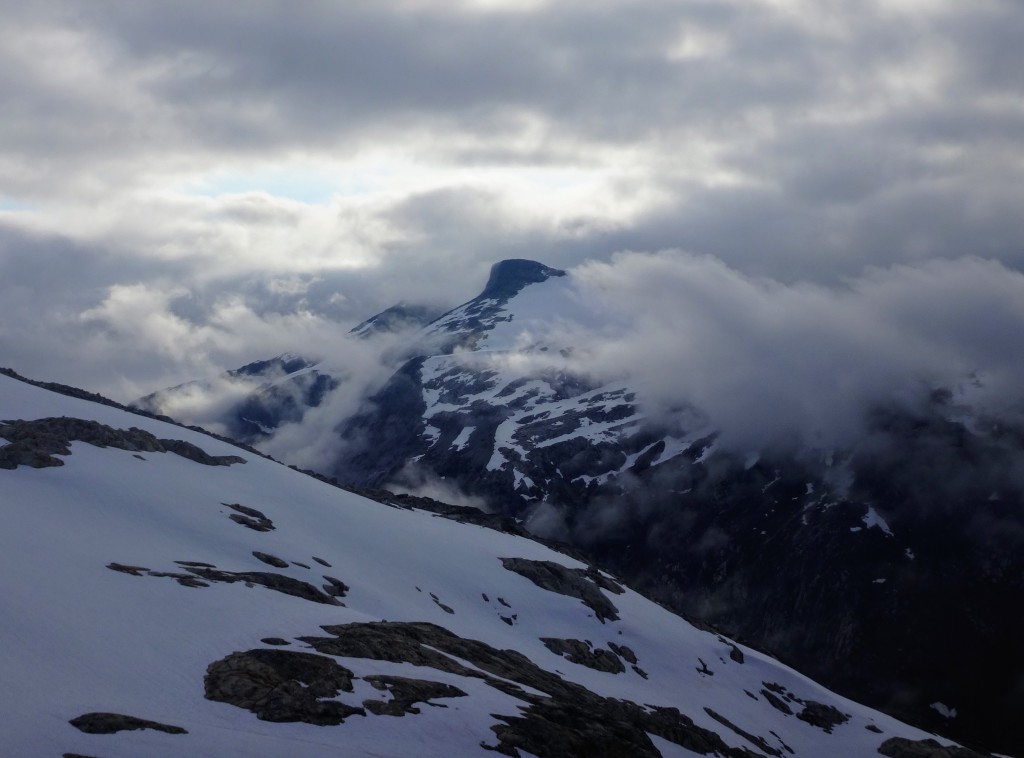 Mt. John Clarke across the valley.

The next morning we made an unfortunate discovery. There was poo in our snowmelt patch. We knew it was human poo because of the toilet paper, and it wasn’t a very big snowpatch. Luckily we had boiled all our drinking water for tea. Nevertheless, Birgit’s stomach required frequent stops for the rest of the trip. Somehow it doesn’t take long once access is restored for people to distribute poo in unlikely places.

We left earlyish to make the best of the morning on Sunday (it was supposed to rain in the afternoon, but it never did), and marched up the ridge towards Outrigger Peak. Richard lost his hankie, went back to search for it, and devised a foolproof handkerchief-attachment-system using a prussik—the most stereotypically English trip incident so far. 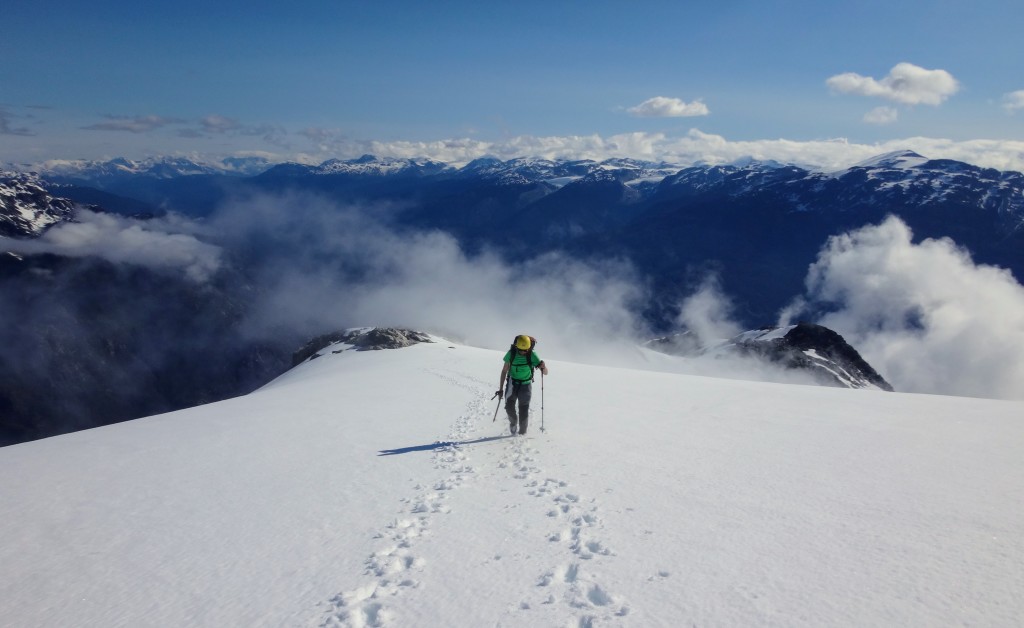 Richard after being reunited with his hankie

There was quite a lot of snow, but we think we largely managed to keep off the glaciers. Wolverine and mountain goat tracks were everywhere, and the views just kept getting better. All the rock seemed to have been cut in massive cubes, and this forced the meltwater into funny zigzag steams. We rounded the back of the horseshoe and saw hikers! People! We shouted across at them to ask if they’d be willing to drive our car down from Outrigger Peak, but they declined as the “shuttle wasn’t too bad for them”. This would have saved us 7 km and nearly 600 m of elevation gain at the end of the trip… 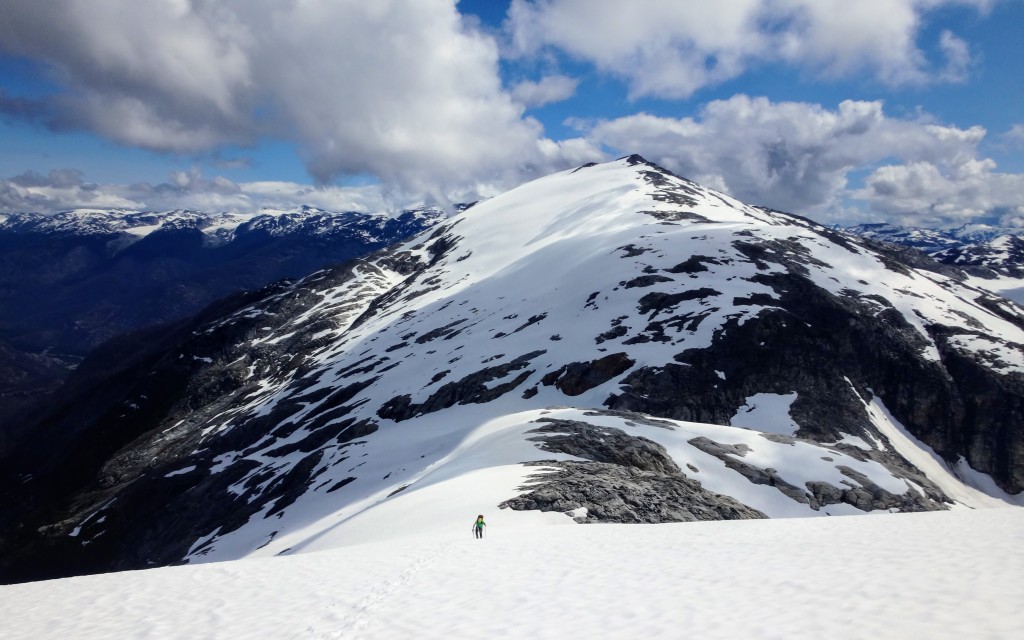 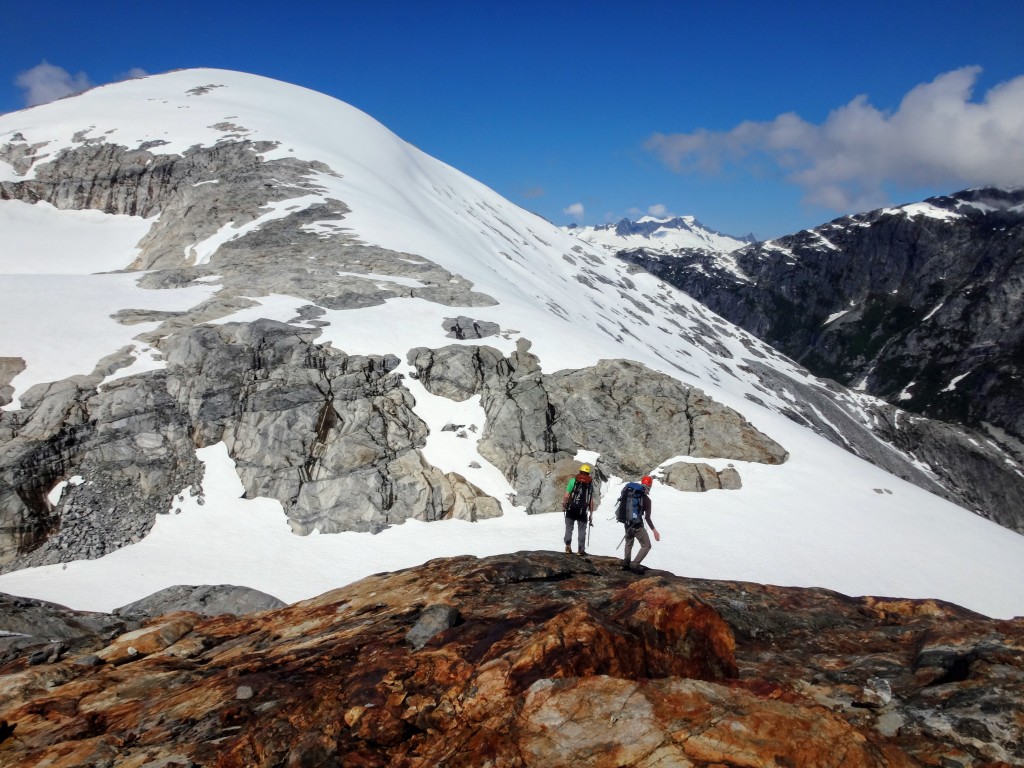 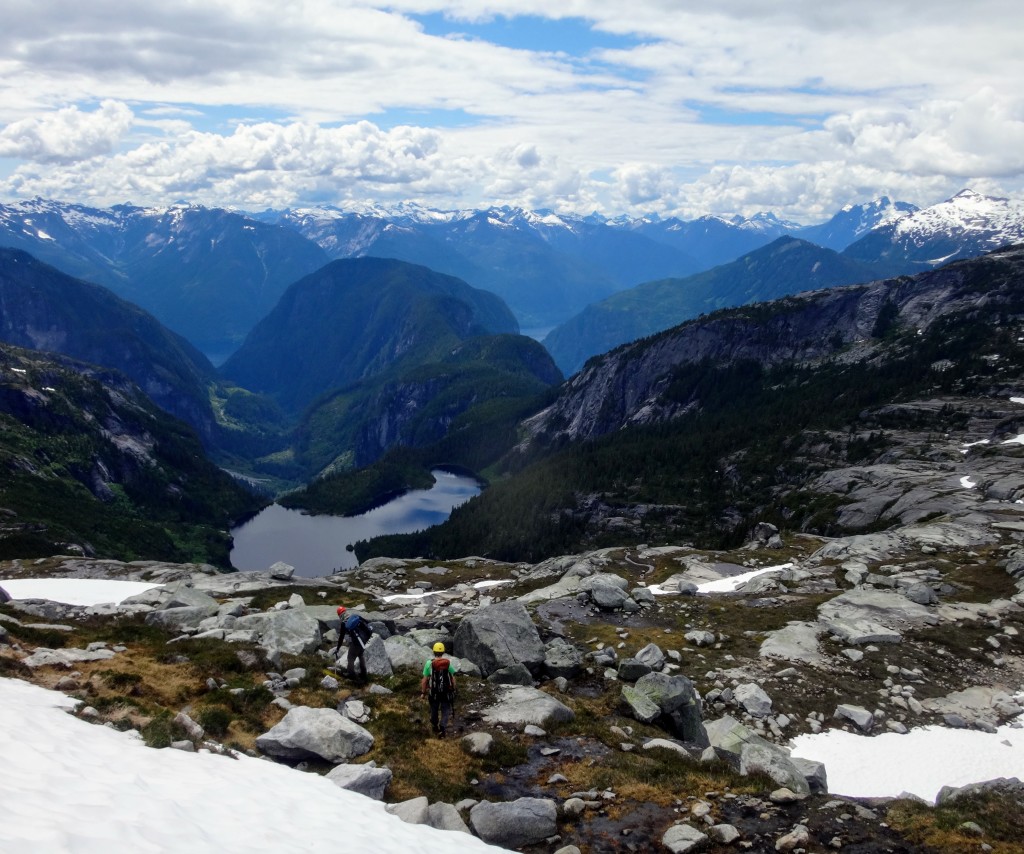 We took an hour to enjoy the views of Princess Louisa Inlet (somehow the ocean makes it way back there) and the impressive 500-metre-high waterfalls, and then camped on the ridge just short of Mt John Clarke’s subsummit, on big granite slabs that faced the sun as it set over Mt Tinniswood and Mt Albert. Waterfalls cascading down nearby the Princess Louisa wall The next morning we divined that it might be a longish day—14 km of logging road, plus a good chunk of alpine and the descent from Bug Lake. When we got to the first long snow slope, Ross realized he didn’t have his ice axe (we learned later that he’d left it at the far end of the horseshoe; the other hikers picked it up). Richard and Vincent shared an ice axe for the rest of the trip (Birgit was spared the shuttle faff as she was in running shoes; MEC refunded her fallen apart hiking boots, but also took them back, leaving her with few choices in footwear). We developed an innovative shuttling system with pickets and a rope that left far too much time to look doowwwn over the cliffs below into the valley. 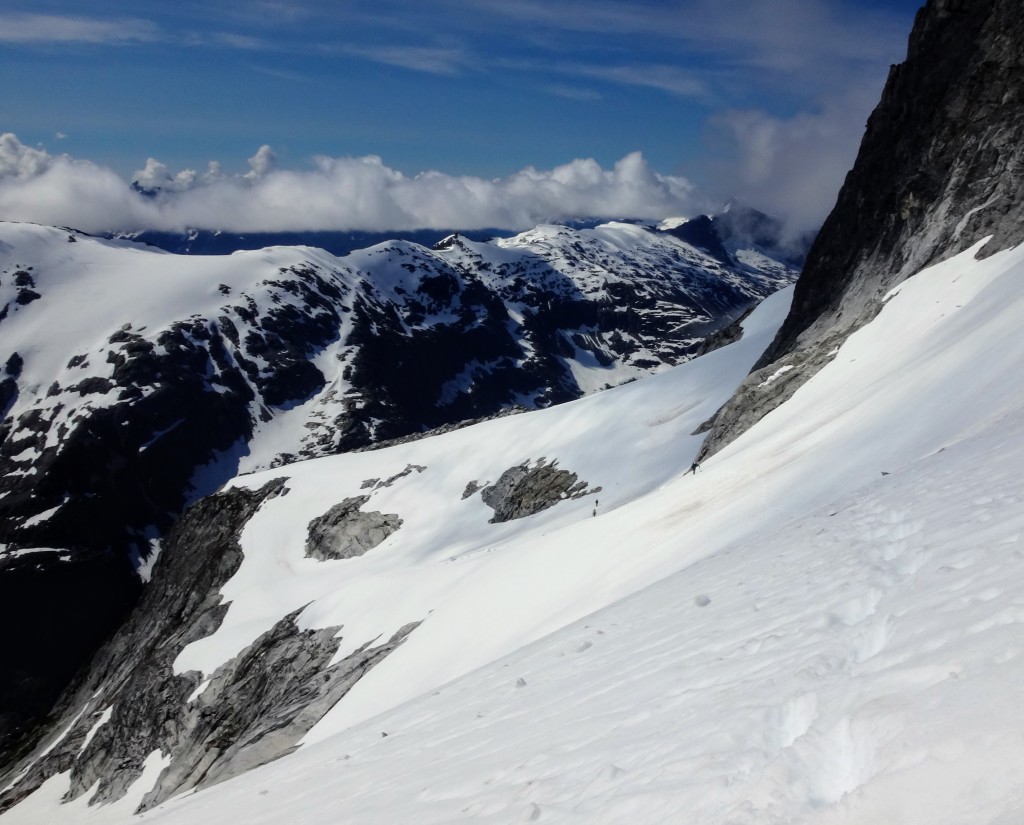 One of the side hills above cliffs around Mt. John Clarke After a detour to the summit of Mt John Clarke, we began what we thought would be a straightforward walk down to Bug Lake. It wasn’t. Gaining the ridge above the lake, at least from the side we tried (the N), required a long exposed snowy traverse; our speed was motivated all the more by the distant rumbling of thunder. The ice axe shuttle returned for another few hundred metres, but not long afterwards we were pounding down the ephemeral trail to Bug Lake, into clouds of hungry mosquitoes, where most of us swam briefly. 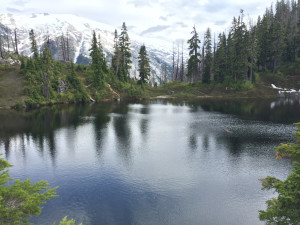 By the time we reached the logging road, it was already 7 pm; and a couple of hours later, with occasional delays for feasting on thimbleberries, we made it to the Outrigger-Sims junction. A deal was struck — Ross and Vincent would go get the car from the spur, while Richard and Birgit napped. On the drive home, we’d get to nap while they drove and kept each other awake with random stories. By 10:45 pm we were driving down the endless logging roads, slowed down every now and then by elk on the road. In Squamish at some ungodly hour, we joined the drunk folks at McDonalds for some late night food. Ross drank a GIANT milkshake and a GIANT coke in probably 2 min, then steeled his bladder for the trip home. We eventually made it back to Vancouver at 3 AM, ready to start work in a few hours. All of us attempting to look energized on the logging road. 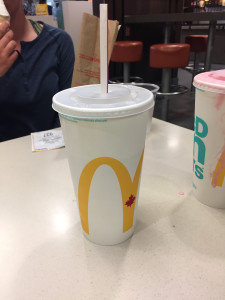 The slightly more technical TR from Bivouac is reposted below, in case you liked the pictures enough to try the traverse yourself. Note that we belayed across two of the snow slopes along the way, but this may not be necessary later in the season.

The road had fallen into disrepair, but it has recently been improved. G (Sims) Main is now in very good condition to about 2 km past the spur that climbs towards Outrigger. The spur (~7 km) is also in very drivable to the beginning of route. Farther along G Main towards the Bug Lake trail, the road is blocked by a landslide and covered in bush (no longer possible to shorten the slog by bicycle), but it looks as though it may be cleared soon.

The ascent to the alpine on the Outrigger side was thoroughly burned in the recent Elaho fire, and there are lots of unstable trees that would be a danger in moderate or high wind. Bug Lake and part of the descent back to the road were also partly burned. The Bug Lake trail still exists, but it is slow going and occasionally easy to lose (I assume it’s always been steep and bushy…).

Route-finding in the alpine was generally straightforward, especially on the Outrigger side. There were a few exposed snow slopes that we belayed people across (probably optional, but it’s a good idea). Steepish snow W of the subsummit of Mt John Clarke was probably the crux of the trip. There is little to no mandatory glacier travel, but walking across the glacier W of Mt John Clarke is probably easier than scrambling the SW ridge. There may be a short mandatory section of glacier between Mt John Clarke and Bug Lake, and possibly somewhere on the Outrigger ridge, but nothing was visible under the snow this early in the season. Gaining the ridge between Mt John Clarke and Bug Lake was surprisingly exposed on the N snow slopes, but possibly the S side of the ridge is better.

*We were wrong. It should definitely be done as a 3-day traverse.