As I walked into the clubroom on Monday afternoon I was asked “Did you go on Burns ‘n Turns?”. After replying that I had, all eyes turned to hear the tale of the five broken bindings, the broken knee, the concussion, the eventual snowmobile rescue, and the broken car window.

Despite how that all may seem, I can confirm that it is slightly over dramatized (since this is a trip report after all), and still an epic trip I will remember for years to come.

Given that this trip involved getting 45 people up to Brew Hut, a bit (or a lot) of faff was to be expected. It started off with the website, as I soon discovered that my name had been moved to the bailed list. I immediately emailed Ross to correct this, but failed to check whether I had a driver. On Friday night I finally decided it might be a good idea to figure out how I was going to get to the parking lot, so I texted Nick, who informed me that he’d pick me up at the wonderful time of 4:15am.

We started gathering at the parking lot a couple hours later, but unfortunately Ross’ modo wasn’t able to make it up the first little uphill, so he had to park at Garibaldi Lake and then be shuttled up. After much faff at the parking lot, we found our skinning groups and started up the logging road. Haley Foladare and I ended up together, with plenty of cliff bar and skin fixing breaks along the way (yay for voile straps!). At one point Andrew from Powder Mountain Catskiing stopped by and told us he’d give us a lift as soon as he finished plowing the road. For some reason I was doubtful that this would actually happen, but alas, an hour later he was back and loading us up. We had to fight our instincts to morally justify accepting this lift, but I guess non-motorized access can have some benefits when you have to skin uphill for 14+km. Besides, this may have been our one an only opportunity to catski, so we weren’t going to pass up on it.

After Andrew kindly dropped us off near the trailhead the skinning continued and the views started opening up. With Black Tusk and Garibaldi in the background we trudged along under blue skies. Eventually everyone made their way to the hut and we enjoyed a beautiful sunset with mountains in every direction. 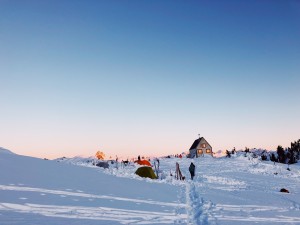 In the evening delicious Haggis and other wonderful potluck items were consumed. Songs were sung, including my new favourite, that one about pirates in Saskatchewan. Although I sadly missed most of the odes, I stepped outside to hear Declan and Tereza exclaiming the following:

“Efficiency and common sense both favour AT,

but damn if our heels and minds aren’t bloody free.

AT skiers just can’t be this rad,

the ultimate proof is Alastair’s dad.

So join the dark side and drop the knee

Both AT and tele now toast Robbie Burns,

After the singing and poetry reciting we had a ceilidh where we thoroughly enjoyed post-holing and falling over repeatedly in an attempt to keep up with the music. The dance itself seemed simple enough, but it is safe to say that attempting it on an uneven surface in the dark is much more complicated and much more entertaining that it first appears. Thanks Ross for teaching us how to do this! Taking advantage of the warmth produced by the falling over (dancing) we went to sleep beneath the milky way.

On Sunday some groups went for a quick tour while other stayed and watched the sunrise from camp. The previous day I had noticed that my binding was a little bit loose so I had strapped it with a voile strap and tried to not think about how I was going to get down. In the morning however, I found that the strap was catching on the crusty snow and causing even more faceplants than would’ve happened without it. I decided that the only way forward was to take it off, but that meant that only my toes would be attached to the ski on a rapidly disintegrating binding that was pivoting in all directions. The way down through the trees was ridiculously hard. I think the universe heard me tell Haley that I was finally feeling competent in the backcountry the day before and decided that I needed a bit of a challenge. Else was endlessly patient and recommended I try side slipping, after which I replied that was desperately trying but clearly failing.

About one kilometre from the lake I heard screams and turned around to find that Jasmine had taken a bad fall and was holing her knee. In the midst of situations like this it’s always hard to know how to proceed and the extent of potential injuries. Haley called the RCMP as we waited to see how serious the injury was but in the end Jasmine was able to hike to the trailhead where once again Andrew came to the rescue and drove her down the logging road.

I was a bit rattled after the whole situation since I had surgery on my knee a few years ago and was suddenly reminded of how fragile joints can be. I still had to get off the mountain though so it’s better not to think about those things. At one point I took my skis off but immediately decided it was a bad idea since sinking into the snow with every step is not much fun. Eventually though, we made it to the trailhead where Ross was patiently waiting under a patch of sun. From here on out it would be easy, or so I thought. But at this point my binding was loser than ever and pizza-ing down was basically my only option since I am not a very skilled skier to begin. I think I was able to do this for like 5 minutes, after which I fell and when I tried to get back up the binding finally fell off the ski completely. I was kind of relieved since I knew this would happen some point, but the 9+km ahead of me would not be much fun. Also, it was getting dark and even though we were all prepared for it I knew it would be a long next few hours.

Else and Swantje helped me make my binding somewhat functional with a mixture of voile straps and skins, but there are just some things that can’t be fixed (yay for club gear!). As a side note I just want to thank them for sticking with me through it all and even taking some weight off my back. Just as we were about to attempt our descent, we heard the roar of snowmobiles behind us, and as we started to move out of the way Swantje had the brilliant idea of intercepting them and asking if they could give me a ride down. The kind snowmobilers looked a bit confused but agreed, and so I got on the back of a not very large vehicle and rode down the mountain in minutes. The ride was super bumpy and I was seriously afraid I was going to fall off a few times but anything was better than having to clumsily slide my way down in the dark (again, yay for non-motorized access!). Once at the parking lot I put on all my layers as we waited for the others to come down. Ross was the first and he soon went to retrieve the modo that was parked at Garibaldi Lake. Haley and Aaron also came down in snowmobiles since Haley had fallen and hit her head on something, which we later found out had caused a concussion.When Ross came back he confirmed that the world is indeed filled with assholes, since someone had broken into the modo and stolen his laptop. Not a great thing to find out after spending an entire weekend organizing a trip.

We drove down to Squamish where we got copious amounts of food, and even though Haley asked me not to I will record here that she got not one but two donuts from Tim Horton’s, in addition to a cheeseburger, of course. We also tried to tape a plastic bag over the window, but it only lasted like 30 seconds before it blew away, so Else had to feel the wind on her face the entire ride home. Although she did have a heated seat, so I guess that kind of makes up for it. At the end of the night everyone had made it home safely and with no use of headlamps required, which felt like a big accomplishment even though we concluded that we can still classify this trip as a debacle.

It is now eight months later and as I’m reading this I have some updates. Haley did in fact have a bad concussion that she is still recovering from, but hopefully she’ll be able to ski this season! I decided that never again would I rely on those tele skis so I escaped the dark side so eloquently described by Delcan and Tereza in their ode and got an AT setup. A couple weekends ago at G1 Swantje and I were standing at the exact location where the snowmobilers picked me up (sans snow this time) and it brought back all these wonderful memories. Anyway, my apologies for this severely delayed report, but I hope posting it in September will get you stoked for ski season! (That was, after all, my plan all along)