Posted on October 24, 2019 by William Raleigh-Smith

We were surprised at the pretrip that only 3 people wanted to try to ski in mid October. Johan, Seton and I decided that the most likely place to get decent turns was up around Wedgemont lakes. It was predicted that there would be 70cm of fresh snow in an area that is 2000m+ at valley bottom, has permanent snow and several glaciers. There is also a hut, which minimizes suffering if it rains and all the snow disappears. Freezing levels were low and it seemed like ski conditions might be properly good. We left Saturday morning with the goal of touching skis to snow. After picking me up, Seton made a quick double back to his place for a dry pair of shoes to drive home in and a roll of toilet paper. Driving through downtown we were doing mental checklists and realized that Johan’s avalanche probe was still in stick-clip mode and sitting with his rock gear back at the hostel. We turned around, grabbed it, and faffed no more. Almost nobody was driving north, but is seemed like lots of southbound cars on the 99 for 6 am, I guess the rest of the world though it would be a dreary weekend in the mountains. At the trailhead we strapped skis and boots to packs and started up in running shoes. We got very excited when we started to see snow patches next to the trail. A bit over 3 hours of grunting and sweating later we arrived at the hut. I made damn sure that our camping permits were paid for and had the proof with me. For some reason, there was no ranger and nobody else staying at the hut. We ditched our sleeping bags, cooking gear, and soaked runners and at the hut and went in search of freshies. 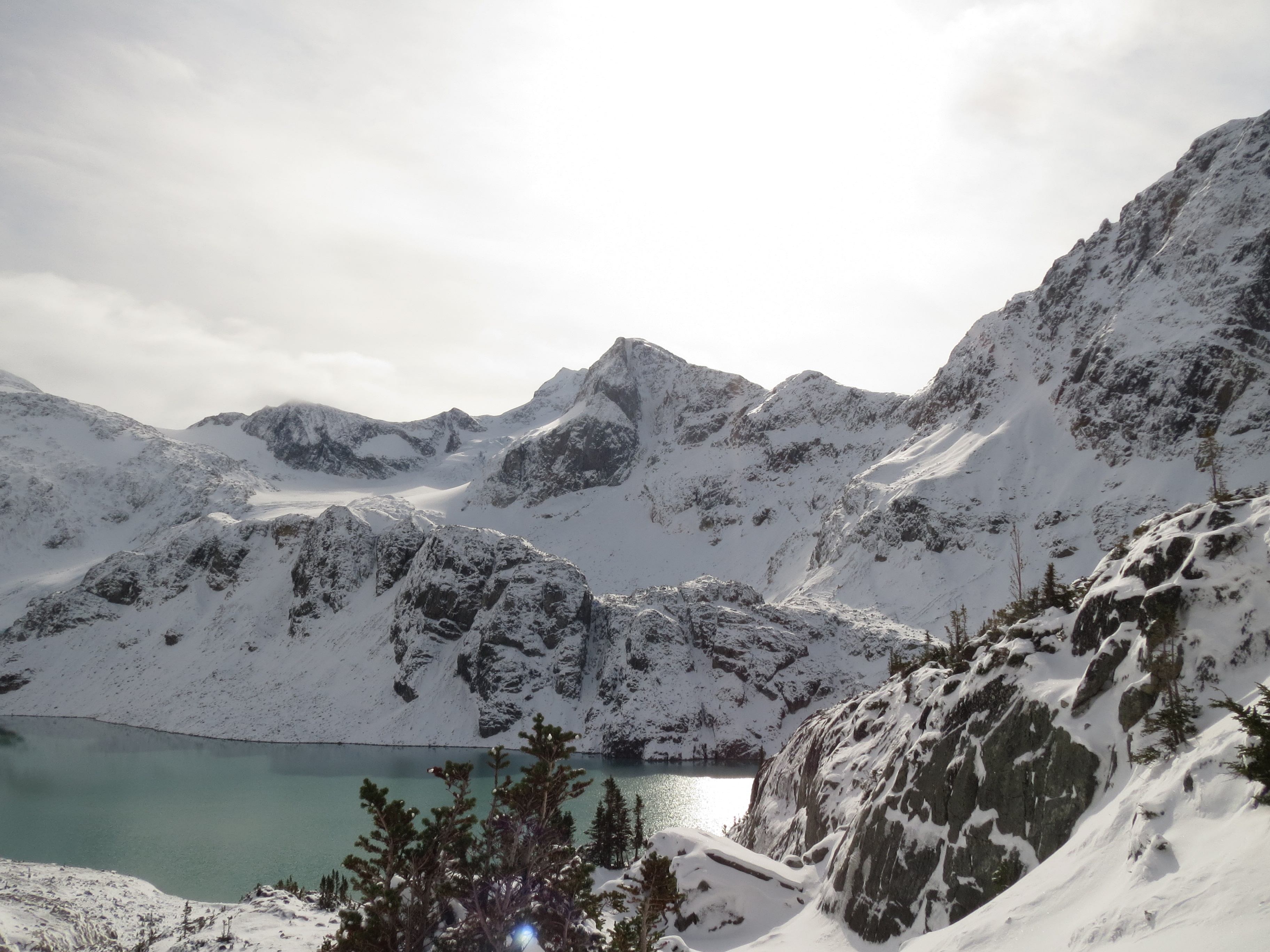 Not a bad place!

Unfortunately, the snowpack near the lake was shallow. Large rocks poked through the shallow snow, threatening the bases of our skis. We’d have to continue hiking up to the glacier. On the way over we stopped briefly to take a disgusting Instagram-esque photo of me posing on a rock.

We slogged over to the glacier and saw a couloir that seemed to have a fair bit of snow in it. We excitedly roped up and skinned over across the glacier and up the col. It was filled with fresh, fluffy snow. Not Rockies level fluffy, but typical weight for maritime snow. 3 glorious laps later it was kinda skied out and our legs were getting shaky. 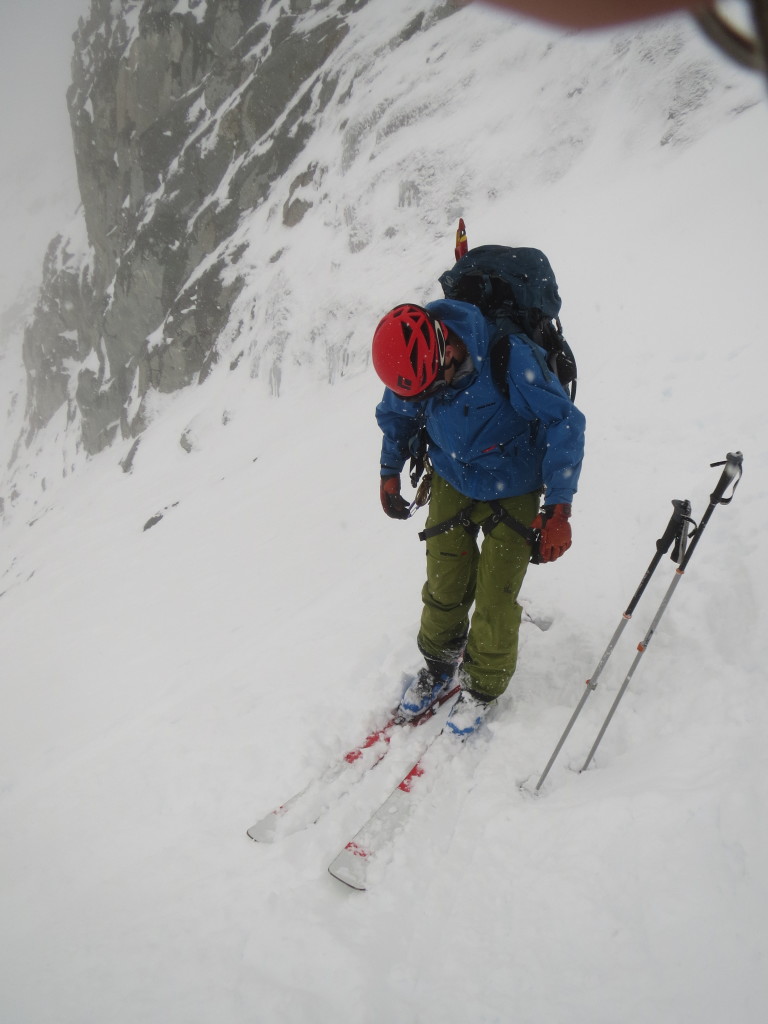 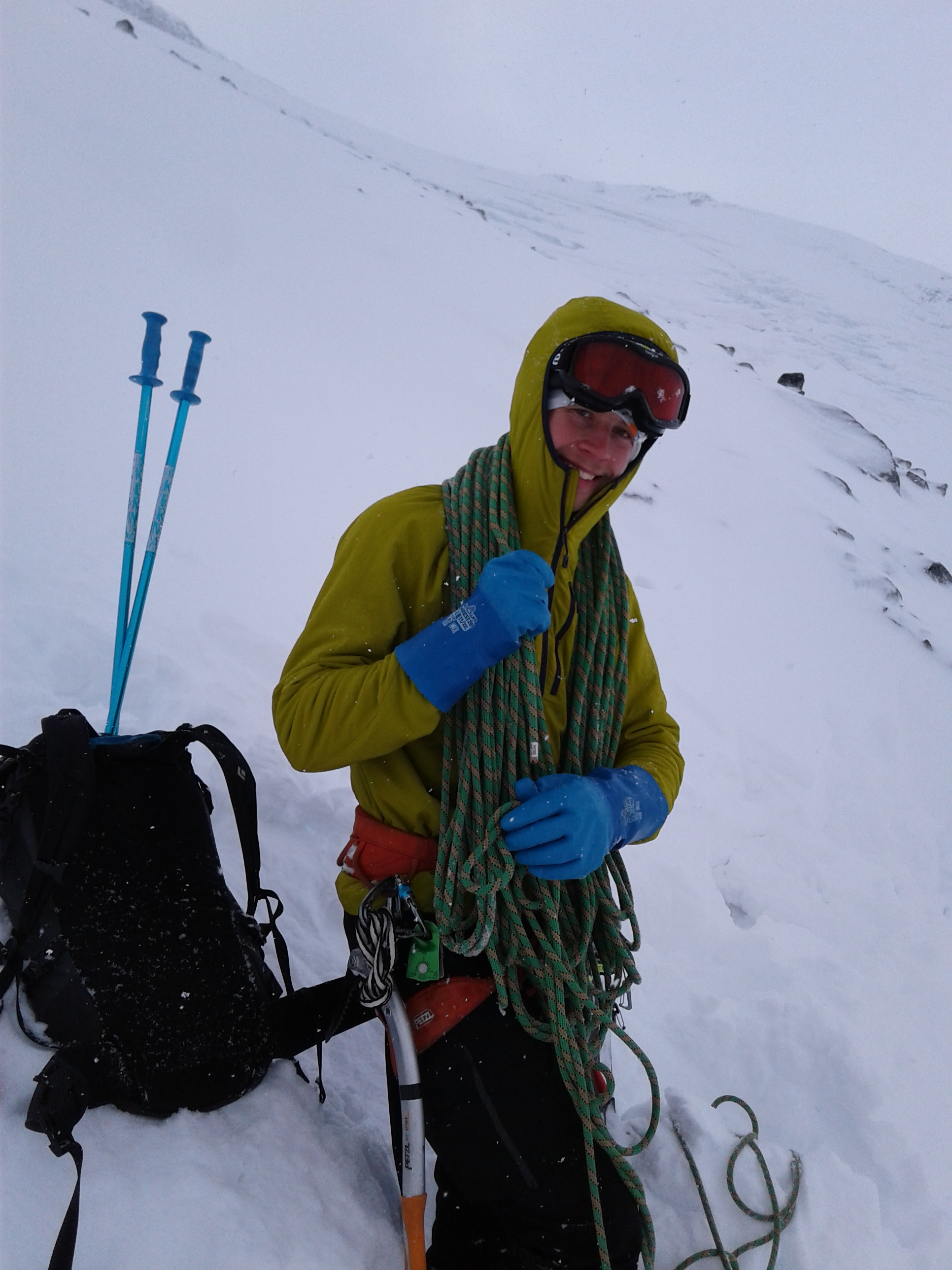 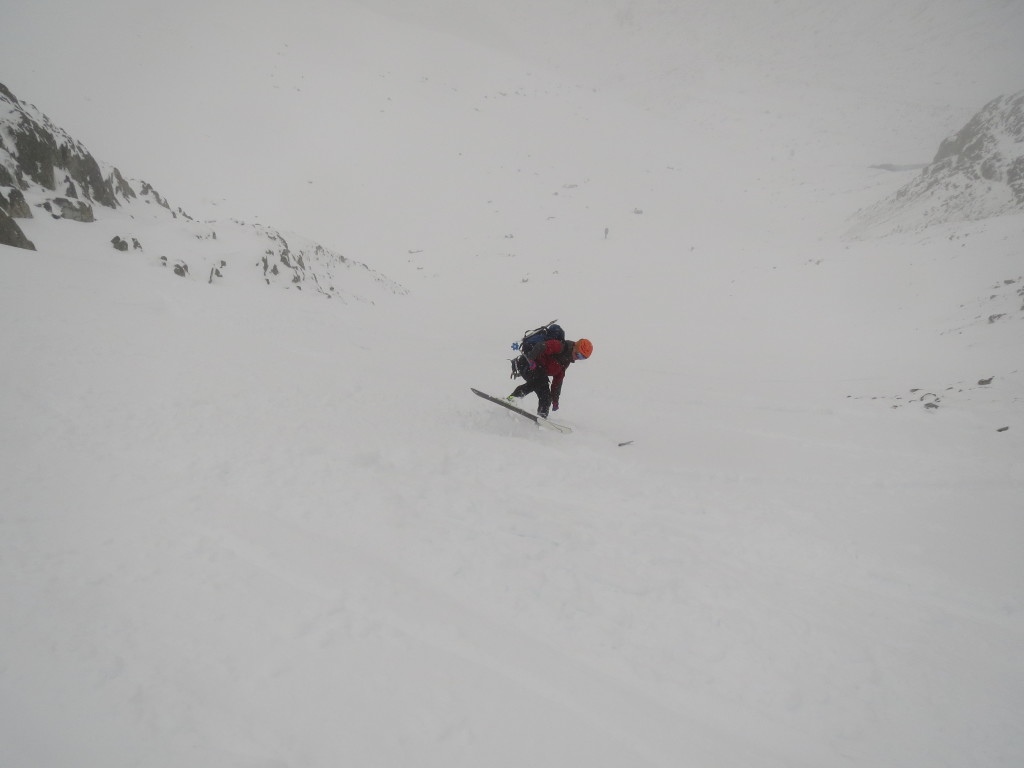 It was at this moment William realized: he f*cked up. 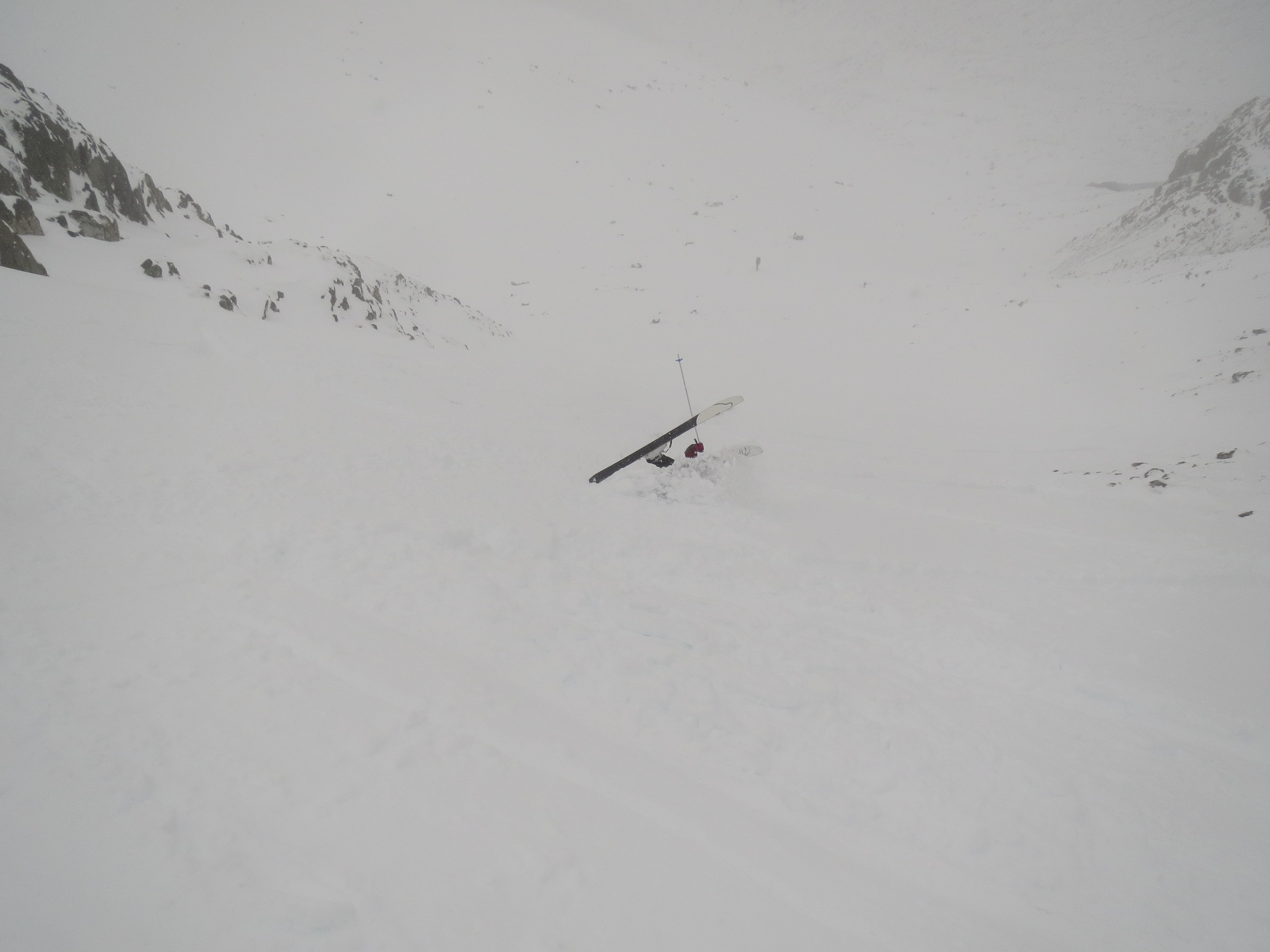 An incredible photograph taken by Seton ^

Many high five’s were given as we laughed at the naysayers who said our trip would be pure suffering. We headed back to the hut in light snow, praying for it to nuke overnight. We only hit a few rocks each skiing off the glacier. Back at the hut we found some fireball and cider than had been forgotten. Er, donated. Seton’s ancient whisperlite is about 15 years older than we are and has some quirks. After several fireballs and some singe marks on my jacket, dinner was done. We fell asleep just after 9pm and forgot to drink the free booze. When we woke up we discovered it hadn’t nuked. It had snowed a bit overnight, but not enough to save us from hiking over to the glacier again. We chose another couloir, relying on the wind to deposit extra snow and protect us from the dreaded sharks. Skinning and booting up was steep. We carefully felt out avi conditions and could feel a wind slab forming at the top of the snowpack. Though it had started at 2cm, it was getting thicker and more reactive as we ascended. Above me, Seton “Guys, I think we better stop skinning before this gets any worse”. 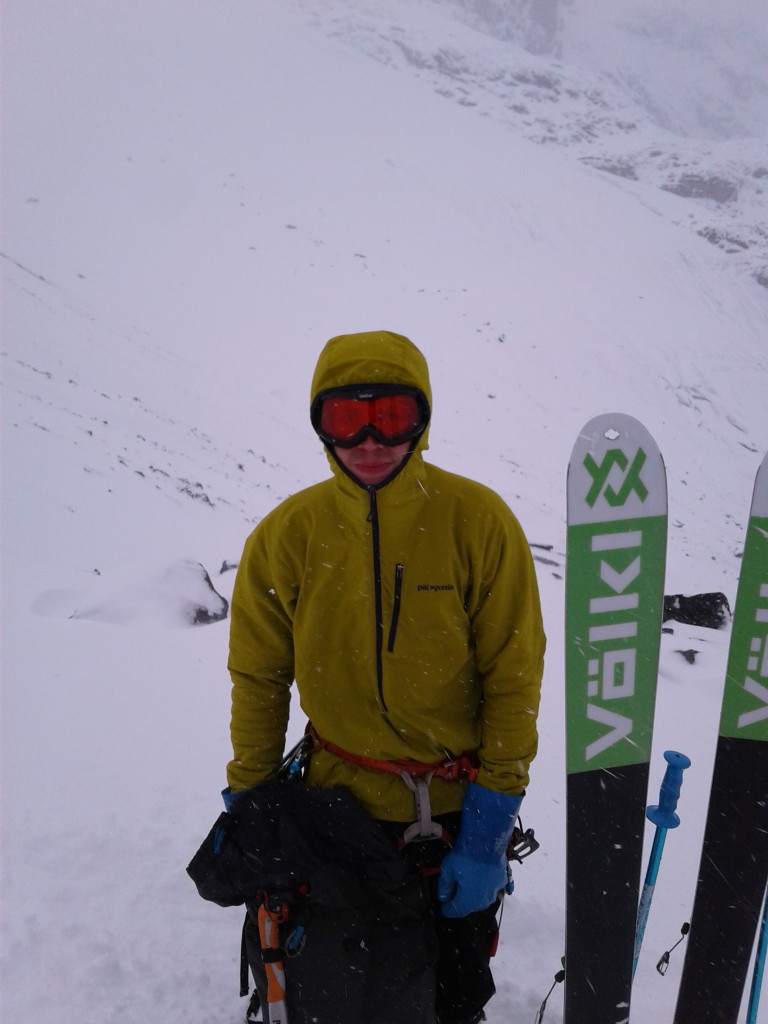 Seton’s done with this bs.

Seton makes a quick transition. Blessed by good light from a sucker hole, he rips down the slope. Lots of sluffing around him though, a good thing we turned back when we did. Johan’s binding starts acting up and I wait with him until he gets it. He locks in and I leap down the slope, trying to catch the dying light from the sucker hole before it gets really flat again. No such luck, I’m skiing mostly by feel. Turn, Turn, Turn, oh damn- “SLAB” I shout as a crack materializes next to me. I stop and watch snow run away from me. I peer around, trying to see the dimensions of the crown in the terrible light. I quickly realize that it was too small to bury anyone, but drives home the fact that we need to leave. Of course, Johan styles the run despite awful light. We ski across the glacier and ski down until we’re sick of hearing skis touch rock. 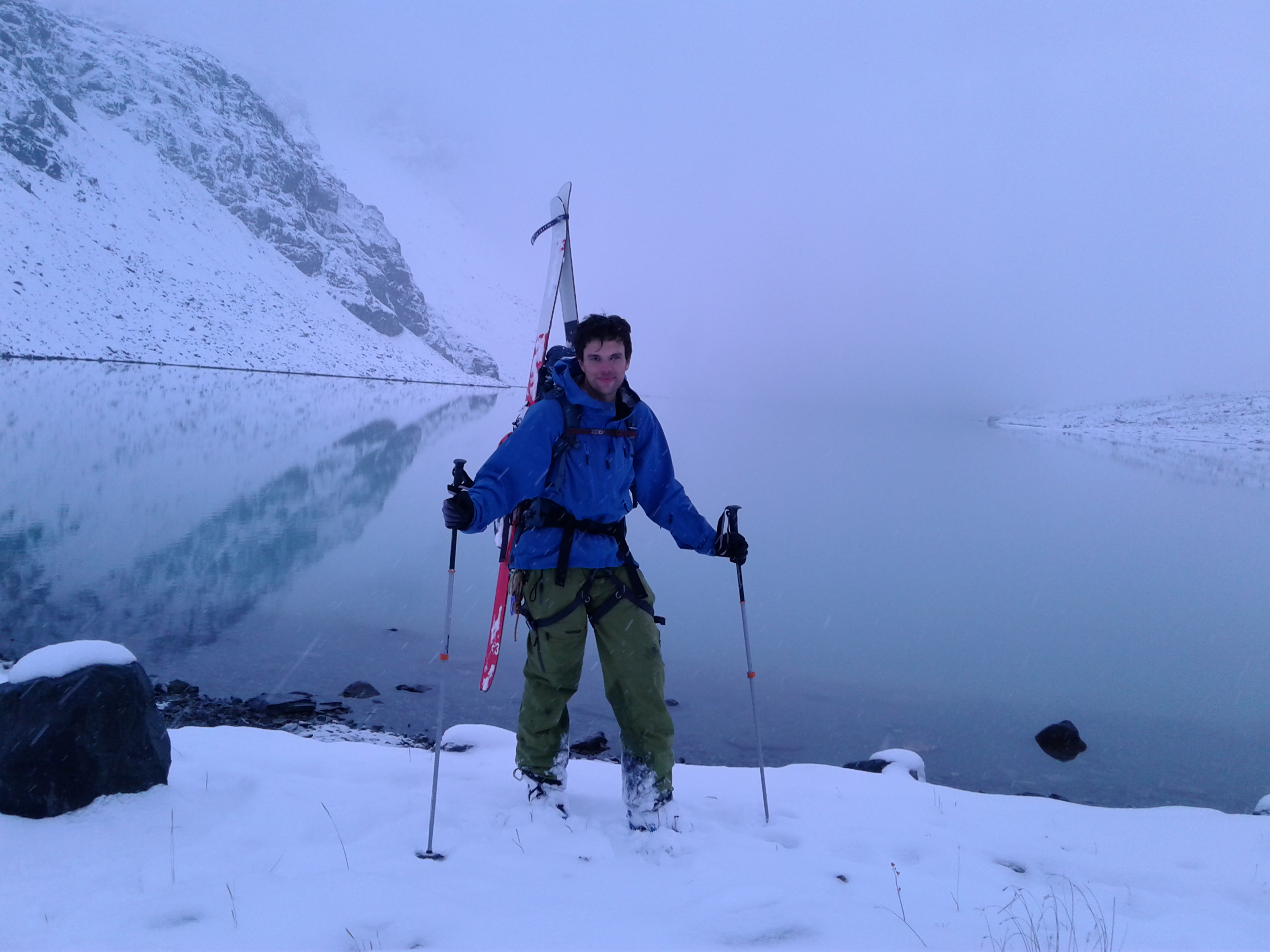 We strap skis onto packs and motor back to the hut to pack up. Hiking out feels interminably long. The snowline has dropped even lower, and we’re hungry. Seton’s skis wouldn’t stay strapped to his pack properly, and his toes hurt so much he was seriously wondering if his feet had grown in the last 6 months. It would be especially sucky to need new boots because he just ordered Intuition Liners. We got back to the car *just* before headlamp o’clock. We had gotten some QUALITY turns in October! We were stoked! And very hungry. 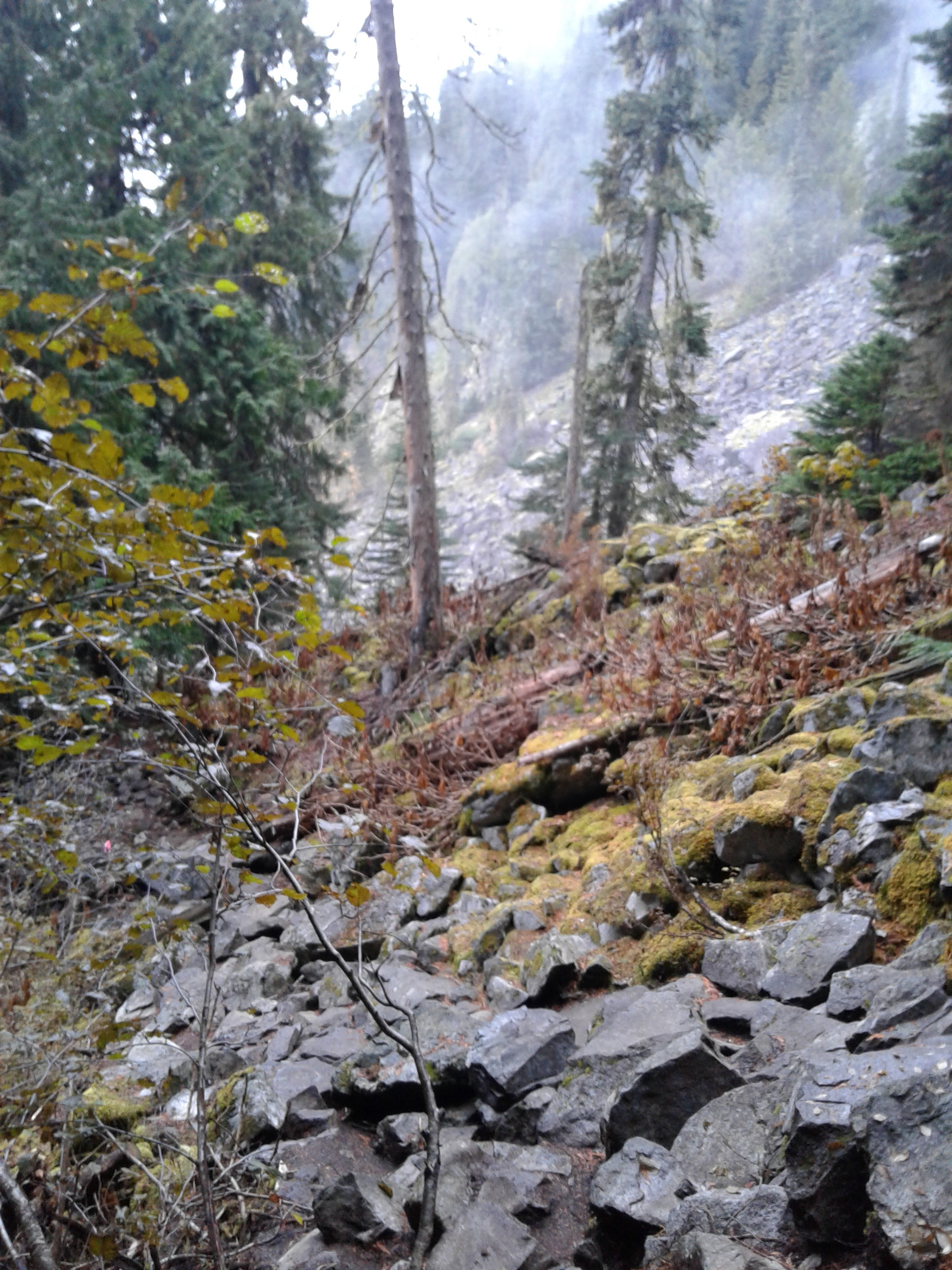