Purpose I wanted to see if the Roe Creek bridge was still there, drain the hut’s donation box, check for snow for the Debacle, see the outhouse hole that Jeff had dug, see if the solar lighting still worked.  Sherry needed to get out of the city.  The Jeep needed exercise.

It’s a hard life being a driver. By the time we got to the Lions Gate Bridge it was 8am and I’d already been driving for an hour. The traffic was light, the forecast was for bluebird sky, and we had just enough tasty food for the two of us. The Hut Registration Page told us to expect 14 people up there including ourselves, which is a good sized crowd for Brew.

The road deteriorates gradually so you can stop driving when you decide the road has deteriorated enough. The bridge across Roe Creek was still there in all its deteriorating glory and the deep cross ditches seem to be mellowing. For some reason, probably laziness or trying to imitate Veenstra, we decided to drive over all the cross ditches and parked up at the trail head. I don’t recommend this. 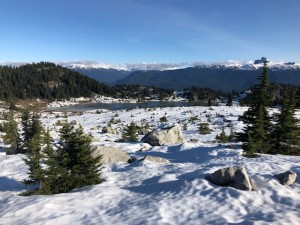 At Brew Lake, where there was snow

Until we got to the lake, the hike in was pretty nice, the few clouds burned off, and it was even getting warmish. No snow. We couldn’t go swimming in Brew Lake because we had forgotten our swim suits, we would have had to break the ice, and I can’t actually swim. Above the lake the snow began, also snowshoe tracks, ski tracks, and fortunately some boot tracks. Fortunately because we were wearing boots, and the walking through some of the rock “gardens” up there was very difficult. Every step might find you standing on the thin crust, down a deep hole between the rocks, or maybe face down on the snow. We had to hurry because there was a party with a 2 1/2 year old girl coming not far behind us, and we felt it would be too embarrassing to be passed by a baby, even one being carried. And we needed to get the best sleeping spots in the hut. 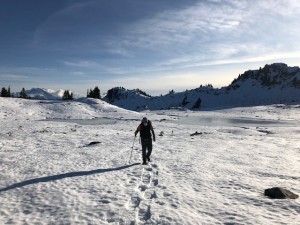 Higher up, still not much snow 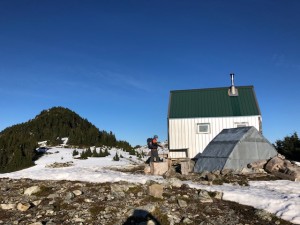 Brew Hut, maybe not much snow for skiing

At the hut there was the usual Brew Hut Smell, the hut was warm, and the heater had gone out. When the little girl arrived she found the hut to be pretty strange, full of strange people, but she soon got over it. The main party up there was the six Slovakians and they told me it was so nice to talk in their own language, which kind of made up for the fact that I couldn’t understand what they were saying. They offered me tasty food items and various authentic Slovakian beverages. Sherry needed to climb Mt Brew but I needed a nap. Sherry came back; we cooked our dinner. The VOC party investigating an alternate trail arrived and said that the alternate trail was avalanche prone and not very nice.

The hut was now reaching capacity (20?) and some were panicking a bit, fearing they might not fit. I think Tom and Cassandra slept outside on the rocks. It didn’t rain or snow, so with a -40C bag, they didn’t need a tent or a hut. In the hut I had a -3C bag and I didn’t zip it up The night was beautiful (full moon, stars) but very long. My mattress is very noisy. Somebody had to slam the hut door about fifty times. Some people snored or maybe choked to death. The little girl woke up every hour and checked if everything was still OK. Those outside just slept, so next time I want to be outside, in a tent. Sherry just slept because she was very sleep deprived.

Eventually morning came. I tested the Shit-o-matic and noted two buckets of charred poopy toilet paper, one about 1/3 full and the other about 2/3 full. Sherry and I left early because we believed it would start raining very hard at noon. It had frozen hard overnight so sinking through the crust was no longer happening. Sherry offered to loan me one of her micro-spikes, offered me one of her hiking poles, and offered to carry some of my stuff. 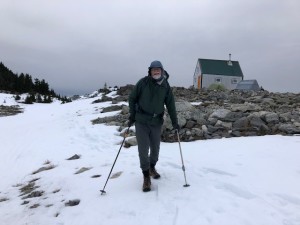 Starting down, slippery.  My boots have zero tread

The rest of the trail was nice and we enjoyed not carrying skis. At noon we were at Squamish MacDonald’s when it started raining.

Conclusions Hut is good. Not much snow. Bring snowshoes. Bring a tent.