Werewolves of the Brew Hut

After some mild procrastination, I’ve finally gotten around to writing the long-overdue trip report of the Werewolves of the Brew Hut hike that took place from October 19-20.  Hopefully everyone can forgive me for my postponement of this report (I think we all know how crazy midterm season can be!) and enjoy the story of this adventure!

This was actually my first trip with the VOC, as well as my first actual hike in the Coast Mountains – I’m much more familiar with the Rockies.  Naturally I wanted a familiar face alongside me, so I convinced my friend Tavleen to come along, despite the fact that she had never done such a long hike, never mind an overnight trip!  But it had been described as “beginner friendly” in the trip description, so it couldn’t be that bad, right?

Anyway, fast forwarding through the pre-trip meeting, our drive out, and stop for coffee, we arrive at the bottom of Roe Creek Road and meet up with the other vehicles.  As we drove up, the road turned out to be in bad condition, so most of us parked and began to walk up the road as Temma began shuttling us all to the trailhead in her pickup truck.  Right off the bat we were treated to some nice views – the day was looking good already! 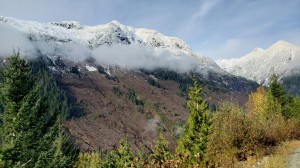 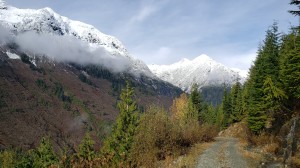 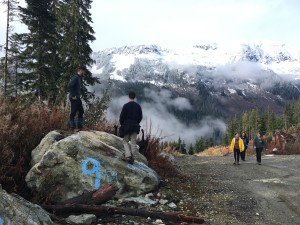 Soon we were all transported to the trailhead, and we set off in smaller groups.  I spent most of the time we were in the forest that was not yet covered in snow marvelling at all the moss – the Albertan side of the Rockies isn’t nearly damp enough for that much moss growth!  As we passed the snow line the forest became a beautiful winter wonderland, and about two thirds of the way up the snow got deep enough for us to stop and strap on the snowshoes we had been carrying.  Luckily, some of the other small groups ahead of ours had done the hard work of finding the path through the forest, and we soon reached the tree line and were rewarded with the beautiful view of Brew Lake surrounded by snowy meadows. 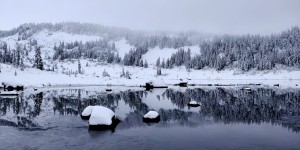 Despite the last part of the hike having the most elevation gain, it was my favourite – we trekked across beautiful snowy meadows as large, fluffy flakes began to fall.  Our small group (Temma, Eden, Tavleen, and I) ran into a family of ptarmigans in their winter feathers on the way up!  At least, I believe they were ptarmigans – bird experts, weigh in! 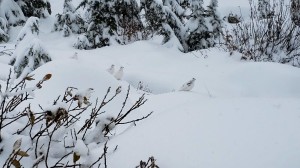 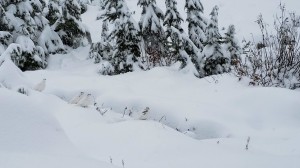 Just as our group was almost up the final ridge, we got to see a couple of the skiers who had made it up to the hut enjoy some of the early season pow!  As we crested the ridge, we finally saw the hut, and joined the groups who had made it there before us in warming up and playing some card games. Sitting in the hut, I reflected on seeing the skiers, as well as my sadness that I was unable to ski this winter (bad crash ski racing leading to knee surgery, it’s a long story…).  However, I came up with an idea that found a loophole in my current ban from sliding down snowy slopes on skis – I wouldn’t use skis, but one of the many garbage bags we had brought up.  So that led to me climbing the slope above the hut and attempting to penguin slide on a garbage bag.  With a running start, it actually worked!  Spot me in in the top left of the next picture. 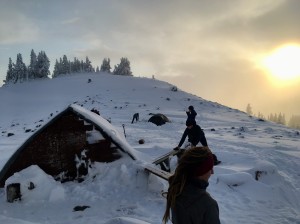 As the clouds cleared up, we also got an amazing view of the mountains around us. 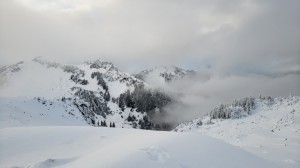 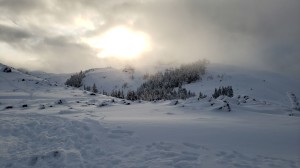 From then on, the evening involved some more cards, warming up, a slightly hectic potluck, and decorating the hut with the Halloween decorations many people had brought up.  Temma even brought up some mini pumpkins!  She proposed that if we did the trip again next year, she’d bring a regular sized pumpkin!  After dinner, we then convened in the loft for the main event of the night – a game of Werewolf. 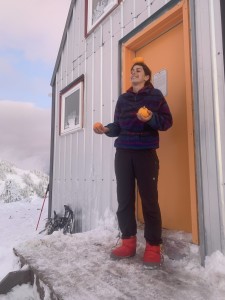 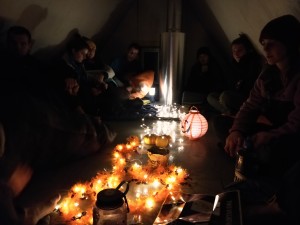 The game of Werewolf that ensued, led by Temma, was exciting and involved River, the town crier, deciding our fate.  In the end, the werewolves won with all of the villagers killed off.  And with a wrap to the game, it was off to bed for most.  However, the clouds had cleared and some people, including Eden and I, took some time to look at the vast expanse of stars and the Milky Way.  We even saw a few shooting stars!  We were optimistic that the skies would stay clear till the morning, so Eden and I vowed to wake up early and watch the sunrise.

Unfortunately, our sunrise-watching plans were crushed when we woke up the next morning not to clear skies, but a whiteout.  We could hardly see 20 feet away.  The morning was lazy as most people slept in, the people from the tents wandering into the hut for warmth when they woke up, and all of us hoping that the snowstorm would pass.  But as time went on, we needed to head down for people to be able to make it to events in the evening, so we struck out down the mountain. 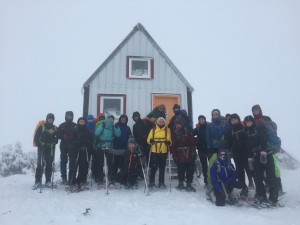 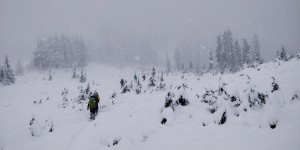 Our tracks from the day before were nonexistent, and the snow much deeper than the day before.  The open slopes above Brew Lake were the worst part of the descent – the wind was cold and biting, and the snow flakes were icy and stinging our faces.  At this point I felt really bad for dragging my friend Tavleen along on this trip for her first big hike, it wasn’t really “beginner” anymore.  But she was absolutely amazing!  Did I mention that this was also her first time snowshoeing as well?

On the way down we kept on the snowshoes until about halfway down, and the snow only turned to rain right as we reached the trailhead.  Talk about an early season snowstorm!  It was a relief to get into Temma’s warm and dry pickup to be shuttled back down to where the cars were parked, where some of us shared a laugh that this trip had strayed from its “beginner” rating as a result of the weather.

Overall, the trip was an incredibly fun and beautiful one, and completely worth it, even considering the challenging weather.  I’d like to thank Temma for organizing the entire endeavour, as well as all of the other werewolves that made the trip as fun as it could be!  Many of us talked about making this an annual trip, and I believe we should, even if just to hold Temma to her word of bringing up a full-sized pumpkin to the hut.  With this as my first VOC trip, I now have some high expectations for the club, and I cant’t wait to go on some more trips this winter!