Shuyu and I were desperate to get on a trip, after the Alcoholic Traverse collapsed for the third time due to lack of participants. There was an overnight trip to Illal Meadows (Coquihalla) which we could have gone on, but it suffered from several problems. It’s a longish drive to the Coquihalla and we expected a lot of weekend traffic, we would have to get up early, there was three kms of bad road to drive, and we somehow sensed that those people would be fast. I figured that Brandywine Meadows might be better, less of a drive, we could claim that we were scouting out the first part of the Alcoholic Traverse, and we wouldn’t have to keep up with the rest of the group. Upper Brandywine Creek might even qualify for some clothing-optional immersion points. I left the decision to Shuyu, because she’s the driver. She picked Brandywine.

The road was not great. We didn’t drive as far as we could because we didn’t want to damage the Subaru. There were many cars parked at various places and some made it to the trail head, including a Subaru. While walking back to our Subaru we noticed suspicious patches of oil on the road. Maybe somebody punctured their car on a rock. But we didn’t. There were lots of rocks.

Shuyu carried almost everything, the tent, the food, the stove. I claimed to be feeling sickly. Shuyu said she is slow. She waited for me several times. I guess that makes me really slow. At the meadows we wanted to get the very best campsite and competition was fierce. Many families, small children, lots of dogs, day trippers, overnighters. Shuyu tried to make me climb Brandywine but I was having a Covid Moment, so I just needed to nap. She talked to people going by our tent, “Anybody going up Brandywine” The third group she asked was going and invited her to join them. Meanwhile back at the tent, it was extremely hot, good immersion temperatures but the creek was too shallow. I took my underwear off and soaked it then put it back on which was pretty refreshing, with no danger of drowning. Shuyu got back four hours later and we dined on Spam and Uncle Ben’s rice. 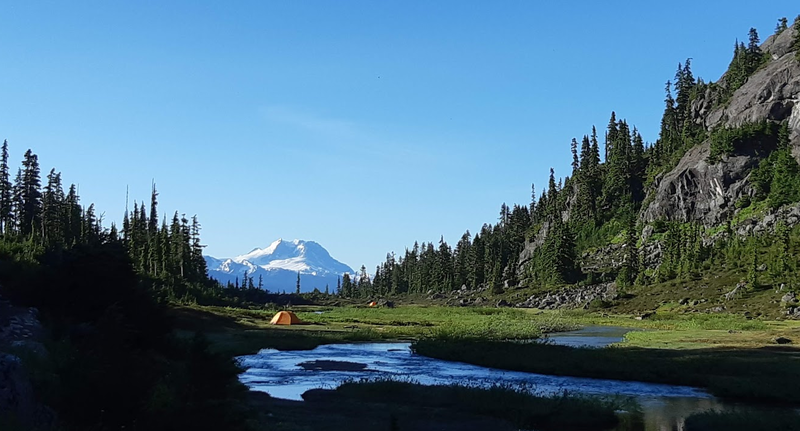 The night was remarkably cold. We left the fly sheet off so we could see the comet and we saw lots of stars. With no clouds it was pretty spectacular but next trip I’m bringing a warmer sleeping bag. We got up at fiveish because we wanted to get down before it got too hot. We had lots of spare time so we ventured a hundred metres off our track to check out the snowmobiler’s cabin. It didn’t look good.

We talked a bit about the Club’s new Diversity need, and we claimed to both be members of a minority group. Shuyu claims to be Chinese and I claim to be Elderly. We believe that Beginner Friendly trips are what we need to promote Inclusivity and Brandywine Meadows is a good Beginner Friendly destination (except for the road).

Finally, we got home at 12:30. That’s noon, not midnight. Shuyu emailed to say that she hadn’t lost her wallet after all, and we should do more trips like this one.

4 Responses to Scouting the Alcoholic Jy 25-26