First, I must apologize for writing another trip report. I feel that especially in the time of the Covid, trip reports are very important so that people can see that VOC still does stuff. This trip was a work trip to our beloved Phelix Hut.  The pictures get bigger if you click on them.

Shuyu and I drove up Friday night. This had advantages. We got to hike when it was still cool, and we didn’t have to go very fast. We left a big pile of stuff at the car for others to carry. The improved road is excellent, three fine but removable bridges have been built and the road is blocked at the “Zero bridge”. We slept in the Jeep which wasn’t great. Next morning some random strangers offered to carry stuff up to the hut, and this worked out very well.

On arrival I immediately painted the outhouse seat and floor because I hoped the paint would be dry before the main group of poopers arrived. 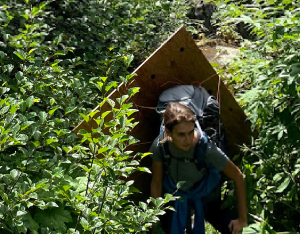 Kylie carrying plywood up the trail

Eventually a lot of discussion occurred, as people realised that discussion was way better than actually working. The outhouse had several issues and the main one was that it was full. We had applied for $2k to replace the outhouse and the FMCBC kindly offered us $750 so we decided that maybe it just needed renovation. Marmots “shit beavers” had eaten much of the outhouse so we planned to cover it with aluminium. Users had complained that “water” was arriving on their feet when they peed, and we planned to fix that. In the hut, white paint was supposed to hide the mould, and the beams were supposed to remain looking like wood, so I bought lacquer for the beams. This was a mistake as the lacquer gave off terrible headache producing fumes, and one of the upstairs windows would not open. Another project was to provide access to the basement and hopefully remove the marmot family that was living there. When we finally removed a sheet of plywood to see what was down there we found at least one large marmot nest with some long-dead animal in it, plus a large quantity of building materials. The marmots had already left for their summer home. It got dark; Shuyu and I retired to our tent; it got remarkably cold.

Sunday morning there was ice on the tent roof, and several frozen mosquitoes. With so much chaos Shuyu and I decided that going home early was our best option. When we finally left around 11:30 the outhouse was lying on its side, Cassandra the President was crawling around inside it trying to attach the new pee-deflector. 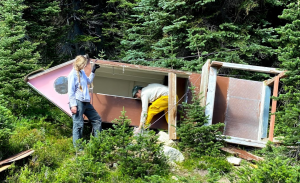 Ross the Outhouse Emptier had ladled about two years supply of runny poop “soup, not stew” into a freshly prepared hole.

Ross and the Freshly Prepared Hole

There was a large pile of spare building material, mouldy plywood, etc, beside the hut, the Painting Committee (Shuyu) had given up trying to use up all the paint, and we had acquired another passenger, John Wragg, who actually knows a lot about building things.

After I got home, I got the message “I can confirm that we did manage to get the outhouse back upright, even in the right location, and with all the desired fixes completed. It was quite the operation. The firewood also did manage to all get put back into the hut, mostly in usable sizes thanks to Sam, and the door for the extra firewood storage under the hut got put in place. We ended up leaving around 5pm. Cassandra, Tom, and Sam decided to spend an extra night up there to finish up some of the projects, particularly cleaning up the big mess we managed to create as well as going back on the trail to cut some of the trees that came down across the trail since they did carry the chainsaw up.”

As we were driving back towards Mount Currie Village, we saw a cute baby black bear cross the road. Others saw other bears. Haley was disappointed; she saw no bears.

Did we have fun? The scenery is remarkably gorgeous up there and others have noticed this. There were 15 cars parked at the end of the road. I think we felt that we might have made a few mistakes, but we accomplished something, perhaps something more worthwhile than getting to the top of Mt Gandalf again.

3 Responses to Playing in Poop Aug 8-9