It’s been over a month since we backpacked out to the Tricouni area, but I’ve decided to write it up anyway. Interestingly, when converted to Covid time, a normal month is roughly equivalent to either 5 months or 5 days, depending on seemingly nothing at all, so this report is either very very late or right on time.

Anyway, by mid-July the unusual rain/cold spell had started to dissipate, giving us a window of beautiful weather. Our group, with reduced numbers due to pandemic, included myself (Isaac Borrego), Kyle Clarkson, Philippe Lebillon, Simon Holdsworth, Anna Symon, Erik Moore, and Josh Ma. Spaced out as best we could in separate trucks, windows open, we took on the very rough road to the trailhead in my Tacoma and Kyle’s Colorado. This road is not, to say the least, in great shape. I’ll admit that I was initially dismissive when told that the road was pretty bad; having explored extensively in the western US I felt like our roads must be in worse shape than most I’d encounter out in BC. This one, however, proved to be a good challenge for the Taco, though it did triumph in the end (as the Taco usually does). There are several areas of washout and high water bars to be navigated by future Tricouniacs, with a bit of pinstriping to add some nice character to a vehicle. Finally, over the last kilometer or so the road gets ugly. For this stretch the roadbed is composed mainly of medium-sized rocks, with not nearly as much actual road as we would have liked. I had already decided to pull off and park at the nearest opportunity by the time we finally rolled into the little parking lot at the trailhead. 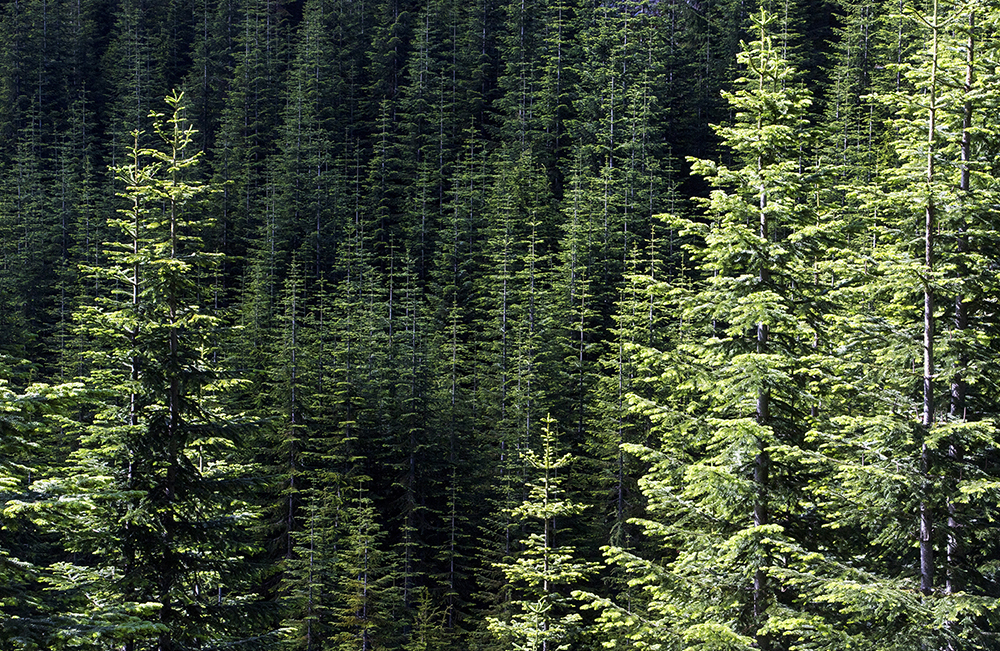 Interesting patterns in a likely replanted forest at the Tricouni trailhead, where the rough FSR ends abruptly.

Starting off from the trailhead with full sun shining down, we immediately realized what the next challenge would entail: mud. So much mud. Like the road, we had been warned about this. Unlike the road, I felt like the mud didn’t quite meet the dire warnings I had been given. In my opinion it would be best described as pretty annoying, but not quite as bad as advertised. In almost all places it’s possible to weave your way through the muddy sections. Though once I did miss and received a shoe full of mud, so care is definitely needed. Thankfully, the trail is really not that long, so after only about an hour and a half we found ourselves at the still partially frozen First Lake. 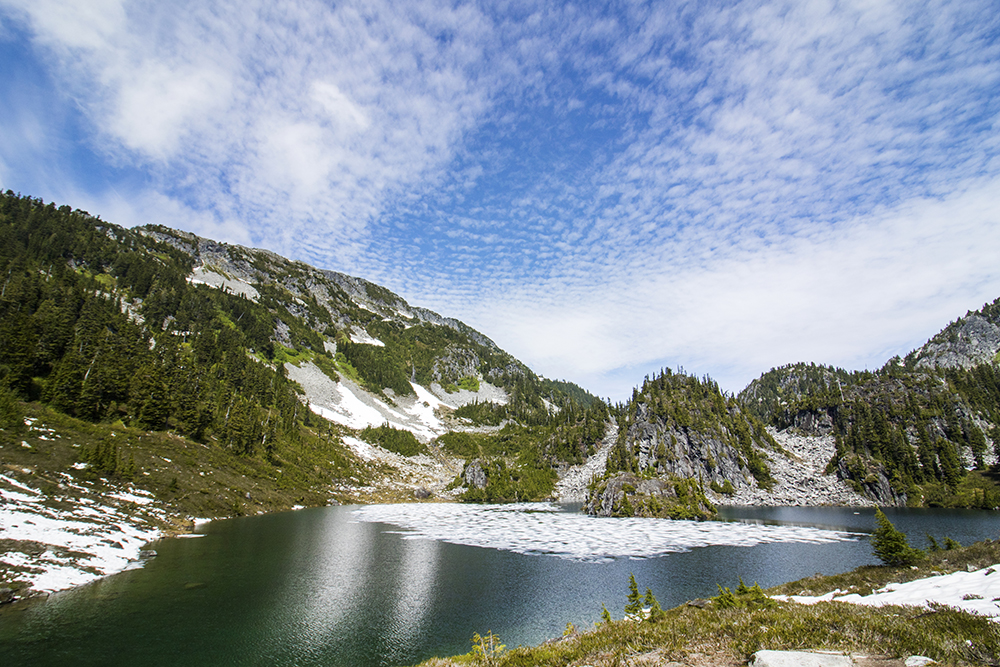 This lake may or may not have a name, some trip reports refer to it as just First Lake. A good view of the summit. We found out the hard way to avoid the snowfield and notch on the far right. The real route goes up to the left a bit and crosses over the rocky ridge sloping down from the sub-peak, near the center.

After discussion with some other hikers on the way in, we had decided to continue past this lake and make our camp at the second lake a little higher up. After only another 15-30 minutes or so of hiking we found ourselves at the small but beautiful lake where we would try to make camp. The crystal clear waters of the small but lovely Spearpoint Lake.

To our chagrin we found the main camp area was already inhabited by other backpackers. There was probably space available if we wanted to make friends, but we weren’t feeling super sociable and so set out in search of an alternative. After a bit of wandering around we found a spot that would make do for our several socially-distanced tents (tent-sharing was unfortunately out of the question). Not the flattest spot, but room enough for everyone and still close to the lake.

After grabbing lunch at camp we decided the weather was too nice to waste and that a summit push was in order. So we set out to gain the ridge above the lake and start up the approach to Tricouni. With a bit of loose, muddy scrambling we arrived at the third lake of the day. 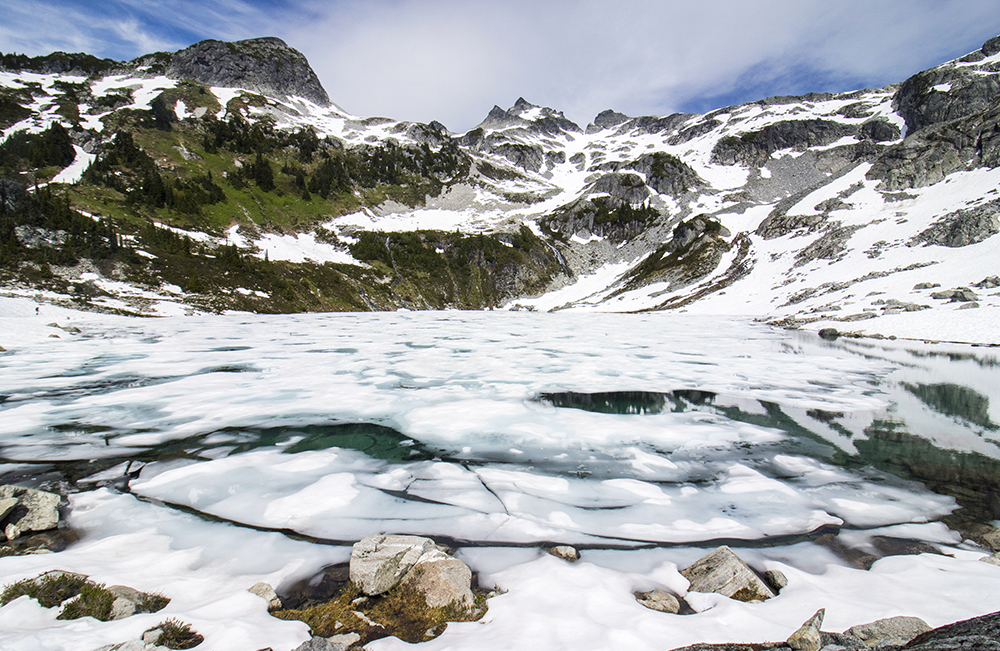 We had to make our way around the still mostly frozen Reflection Lake.

Not knowing what conditions to expect, most of us had brought ice axes. This turned out to be a good idea as there was still a lot of steep-ish snow above the third lake. 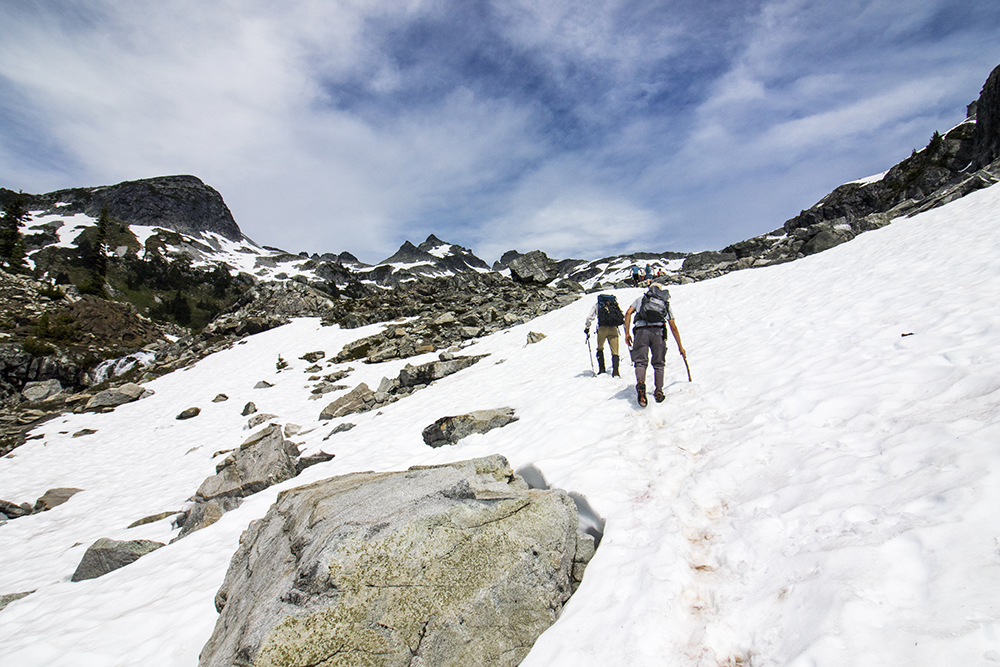 Snow above the lake. Though ice axes were handy, I suppose a stick worked in a pinch for some.

Not too long after this was when a bit of minor trouble started. Philippe and Kyle had gotten pretty far ahead, seemingly continuing up and to the right on the approach. I watched as a group of day hikers came down from a different side, to our left instead, and they confirmed to me that their route for sure went to the top. Checking my map I saw that there were two diverging approaches, so I assumed that the others knew what they were doing. Thus the rest of us followed to the right. However, the closer we got to the V-notch on the right side of Tricouni, the sketchier the terrain started to look. 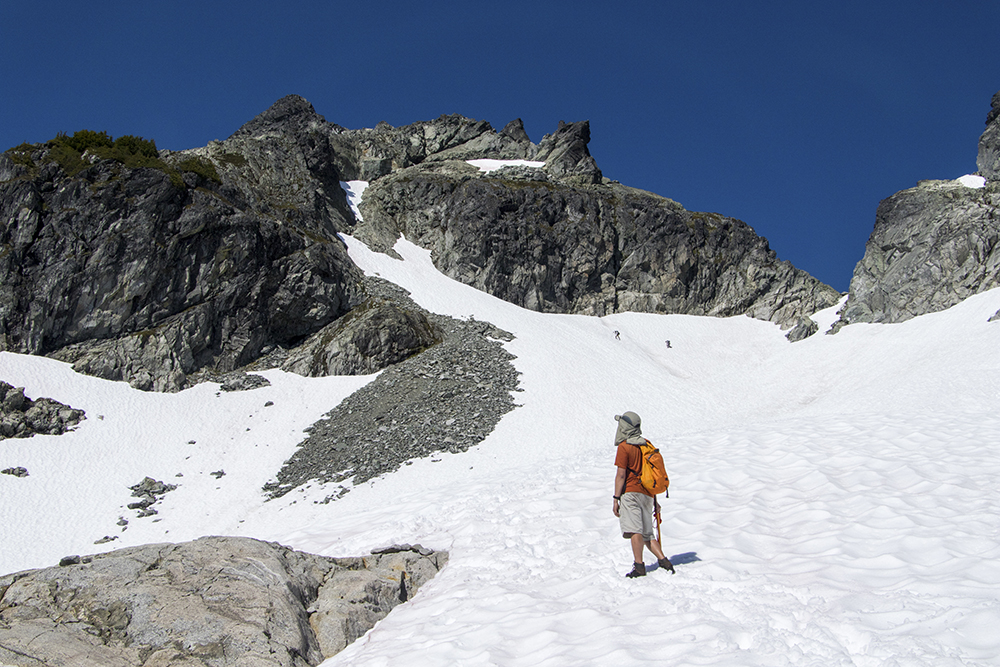 Josh ponders the remaining route(s) to the top of Tricouni. 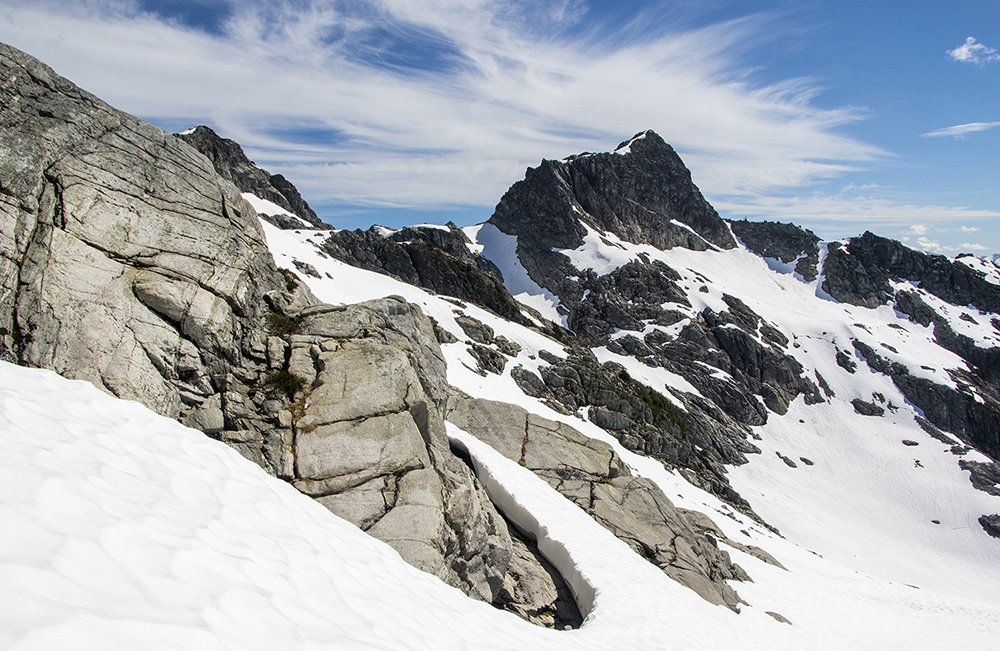 Meanwhile the views had really started to get good.

We watched from below as Philippe and Kyle, along with a couple of other random hikers, veered away from the V-notch and up a seemingly dead-end snowfield. This snowfield looked pretty steep, and seemingly ended abruptly in some cliffs.

They had pretty clearly reached a dead end. After a brief shouting match across the snow, the message was somehow relayed that they should come back down and reevaluate the situation. Meanwhile, the other non-VOC group also dropped back down and began scouting out a way to gain the ridge further to our left. Though it looked pretty cliffy, we saw them make their way up the ledges quite easily before giving us a signal that they were back on route. To get back on course we needed to traverse across this snowfield and scramble up to gain the ridge. It wasn’t as bad as it looked.

Once we had regrouped we followed the other hikers and soon found ourselves scrambling up to the ridge. The cairn we discovered up there buoyed our spirits. Who knew a pile of rocks could spark such joy? Continuing up the ridge, we quickly arrived at the crux of the route. Anna and Simon on the crux. There is a short but fairly exposed section of scrambling here.

Past the crux we found another yet steep snowfield. Then past that we found ourselves on the homestretch. With a teensy bit more exposure on the final ridge we all finally got to the top. Near the top I was greeted by this little cutie.

As far as peaks go, I would describe Tricouni as being very peak-y. Meaning that it feels pretty darn high up and separate from the surrounding mountains, with amazing views in all directions. The views are ok. A rare (at the time) view of then-closed Garibaldi Lake and The Barrier. 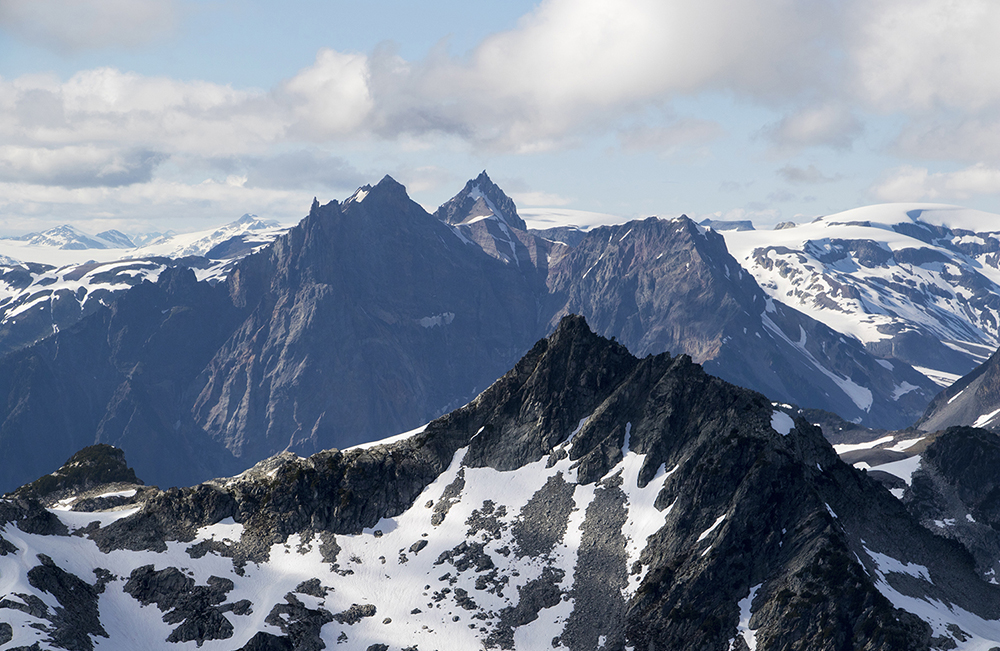 The formidable looking Mount Cayley in the distance.

After the obligatory summit snapshots we sadly decided we would have to leave if we wanted to get back to camp that evening. The descent was much less anxiety-inducing as we took the real route down, but the abundant glissading kept things exciting! I very nearly lost my phone. 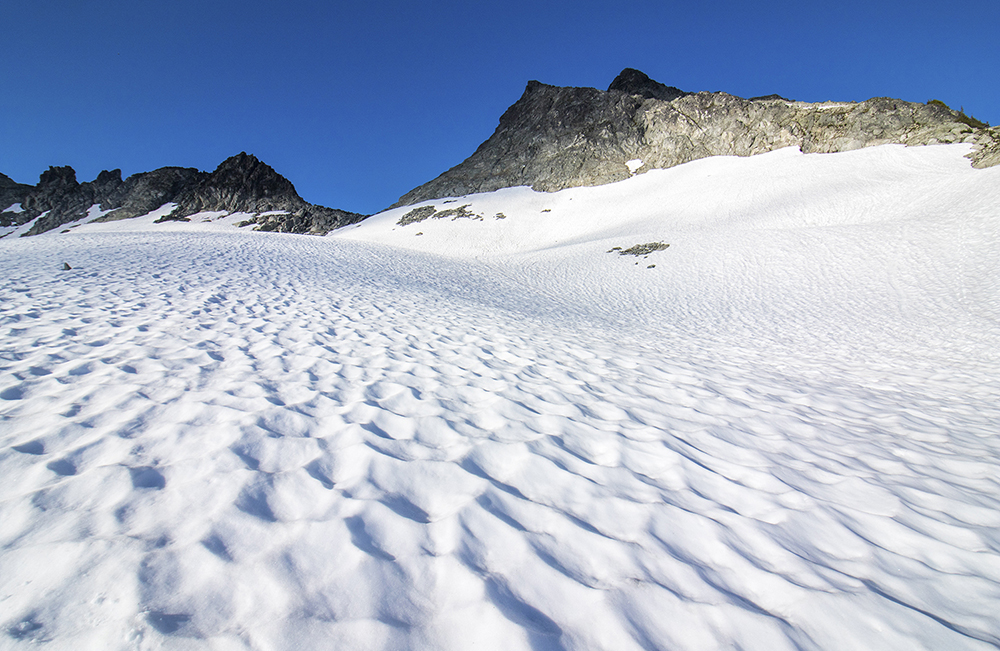 Lots of glissading made for a pretty quick descent off the peak. Though descending the crux took a bit of time.

We soon found ourselves back at Reflection Lake, and boy did it earn the name: Reflections of a nearby peak in the aptly-named lake. Not a bad lake.

After an unexciting last leg of the journey we arrived back at camp, tired and ready for dinner. We got a nice fire going, which seemed to help with the both the bugs and the general ambiance. One last little bit of alpenglow viewed from camp.

Anna, bless her soul, had brought marshmallows and so we stayed up fairly late eating s’mores and stargazing by the fire. Even comet NEOWISE decided to drop by for a bit. Not the most amazing picture (I was too busy with the s’mores to put much effort into it) but it proves that we did see NEOWISE.

A late night led to a late morning, as we debated what to do now that our main objective had already been accomplished. We decided that the best course of action was to explore a couple more lakes nearby before heading out. Pretty close to our camp we found the officially named Tricouni Lake. Dropping down to it we found quite a surprise: This beautiful carving must mark a very special location to the local First Nations.

Though it has since fallen off of its pedestal (probably due to snow drifts), this unique carving immediately drew our attention as we approached the lake. It can’t be all that old, but it must’ve taken a huge amount of time and effort to carve and move to this special location. We decided to take a socially-distant group photo at Tricouni Lake.

After appreciating this work of art (and the surrounding environs) we continued a bit further up to Seagram Lake. This lake must be have its own microclimate, as it was still almost entirely frozen and snow-covered.

Since the lake was frozen we decided to end the exploration there and grab some lunch before returning to camp. Last look at Tricouni Lake on the return.

The return to the trailhead was uneventful, but very hot. So hot out in fact that the ice we had seen in the first lake had vanished overnight. The rest of the ice seemingly melted away over the course of the trip,

In conclusion, I found Tricouni to be a worthy objective for anyone willing to brave 1) bad roads, 2) lots of mud, 3) lots of bugs, and 4) a bit of routefinding. The lakes along the way and the abundant views from the top make it absolutely worth the effort.