Saturna island, widely forgotten amongst the other gulf islands, is a hidden gem full of life and great for a weekend adventure. Boaters passage, a 30 meter passage that lets in a huge amount of water, is a great place to play around with the currents. Tumbo and Cabbage Island are  a marine park and campsite. It’s home to an enormous number of beautiful arbutus trees and it’s large sandy and rocky beaches are home to a wide variety of marine life. East point, a merger of three currents, creates a great spot for whale watching. The lack of houses and campers on this island seemed to allow nature to run wild. Seals, kelp beds, oystercatchers, eagles, etc; many animals call this island home. However, Saturna is also extremely unpredictable, and at times, dangerous to kayak. One side is exposed to the Georgia Strait and there are very powerful currents at both East point and Boaters Passage. One day it can be crystal clear, and the next day 30km winds. The currents alone can get up to 6 knots. 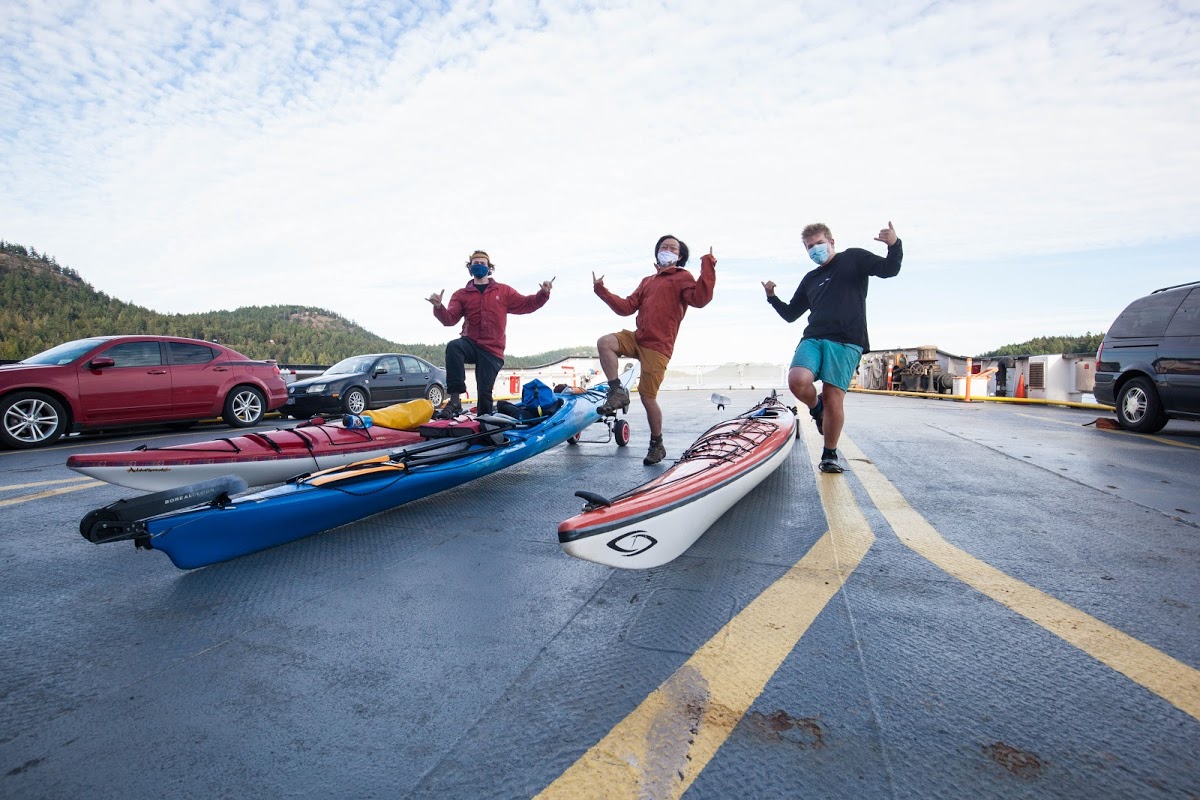 Our crew consisted of Ayemin, Alex Wharton, and Quinn Ramsay (myself). The trip started on Friday August 21st where we raced to the ferry terminal to catch the 7:30pm ferry. Somehow we all were able to all acquire a kayak with only a week in advance. Though we needed to carry the kayaks on rollers, we were allowed to take them on the ferry as though we were only foot passengers. The way over was beautiful from the top deck even though it was dark. We could even see bubbling in the water due to currents between Galiano and Mayne Islands. Fortunately once we got there we were able to find a campsite near the ferry terminal. Our original plan was to kayak in the dark to a spot we found near Boaters Passage.

Boaters Passage was our first obstacle. The next morning our tide charts said the currents would get up to 6 knots – impassable going the wrong way. We planned to pass through at 7:05am at slack tide the next morning so we had an early night for the 5am wake up. The next morning was a modest breakfast, quick packup, and a b-line for the passage (3km away). Even though we got to the Boaters Passage within 10 minutes of slack tide, there was a moderate current pushing against us. In order to get through we paddled hard and steered our boats to prevent our kayaks from spinning. Once we made it through the Boaters Passage the first thing I noticed was how beautiful the day was.

The water was perfectly calm and a beautiful shade of blue. This is difficult to convey without showing a picture (see below). Because we only had 9km left to go that day, we took our time and enjoyed the way to Tumbo Island. We saw many kelp beds, seals, and birds. Alex and I spent some time learning how to use the marine radios we had. After a few hours of leisurely kayaking, we approached Tumbo and Cabbage Island, our campsite spot as planned. Along the way my phone picked up a US cell tower and warned me to quarantine for 2 weeks when I got back to Canada! I hope they aren’t tracking my phone… 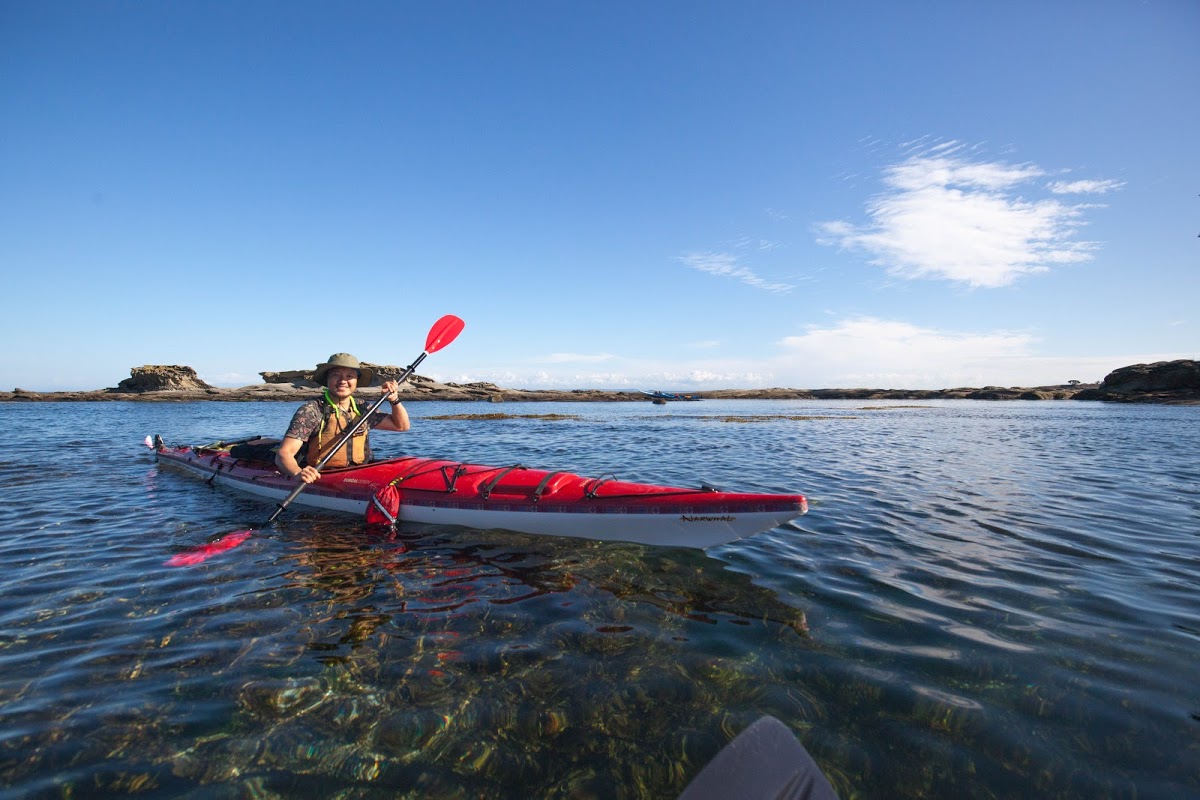 Once we made it to Tumbo island, we decided that the best place to camp in order to see a beautiful sunset was the northern point of the island instead of cabbage island. That was where we decided to unload our camping gear. At this time it was about noon so we decided we would explore around the island for the rest of the day. First we kayaked all the way to east point and watched the current. Birds, kelp and shellfish seemed to love this area because of all the water flow. There was a huge kelp bed, just out of reach of the strong currents at the point. We beached our kayaks and found a lighthouse heritage center (see photo below). This was the best spot on the island to spot orcas so we saw a few groups whale watching. We then made our way to cabbage island and spent hours enjoying the beaches. We even took a nap! 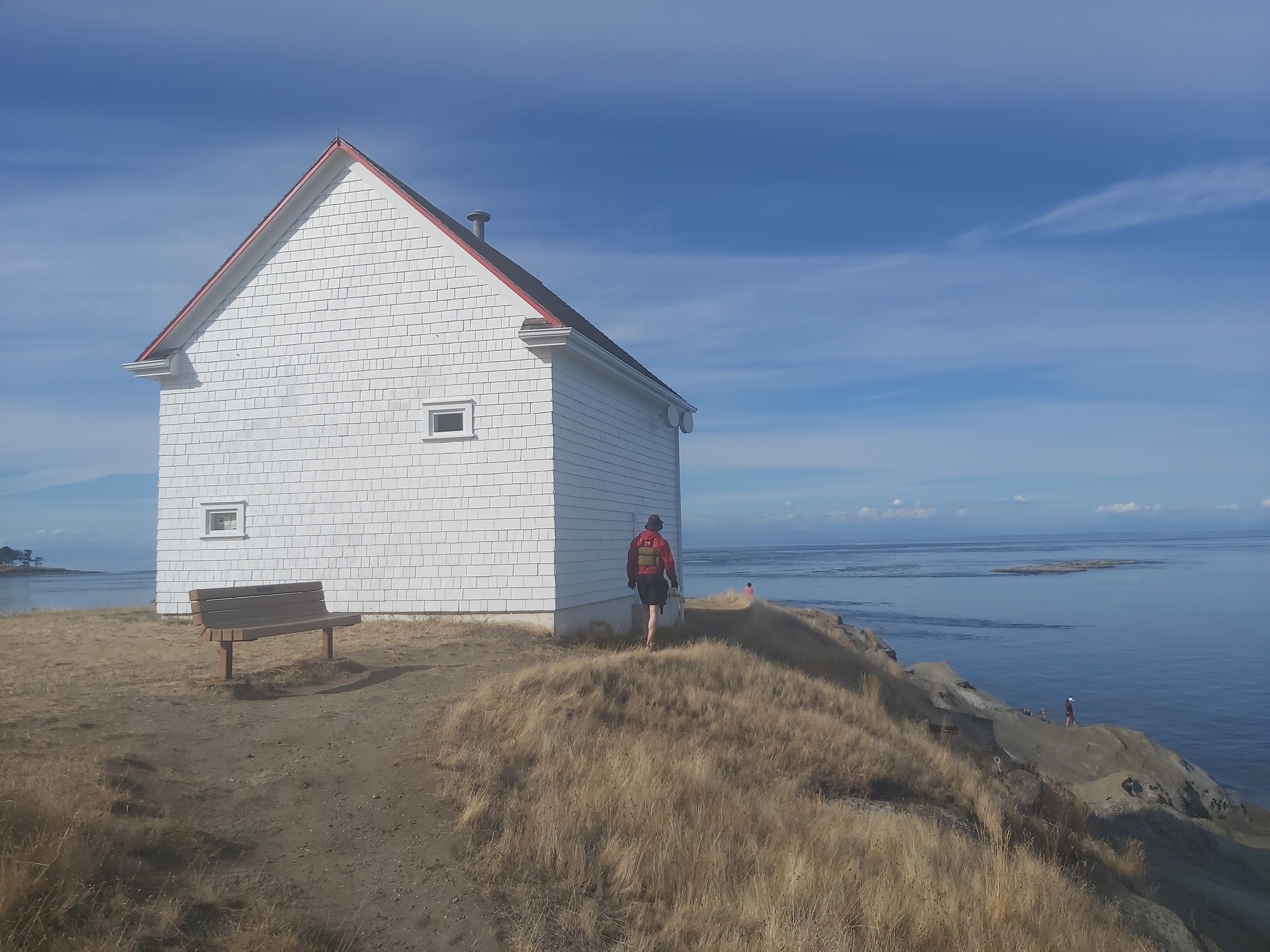 That night we watched a beautiful sunset while we enjoyed dinner (see below). We had had a very relaxing day with excellent weather. This was going to change overnight. I woke up at 2am because my tent was threatening to blow itself over. I got out of bed and redoubled the tent pegs and gave my tent the best chance to stay together until morning. I’m sure the only reason my tent didn’t collapse or blow away was because I was in it. Alex woke up at 3am and wasn’t able to get back to sleep until late until the morning because of the strong wind. I also had a tough time going back to sleep as the tent was hitting me in the face as it flapped in the wind. We woke up at 7am and listened to the marine weather report. Overnight the Georgia Strait had changed from crystal calm to 20 knots wind. 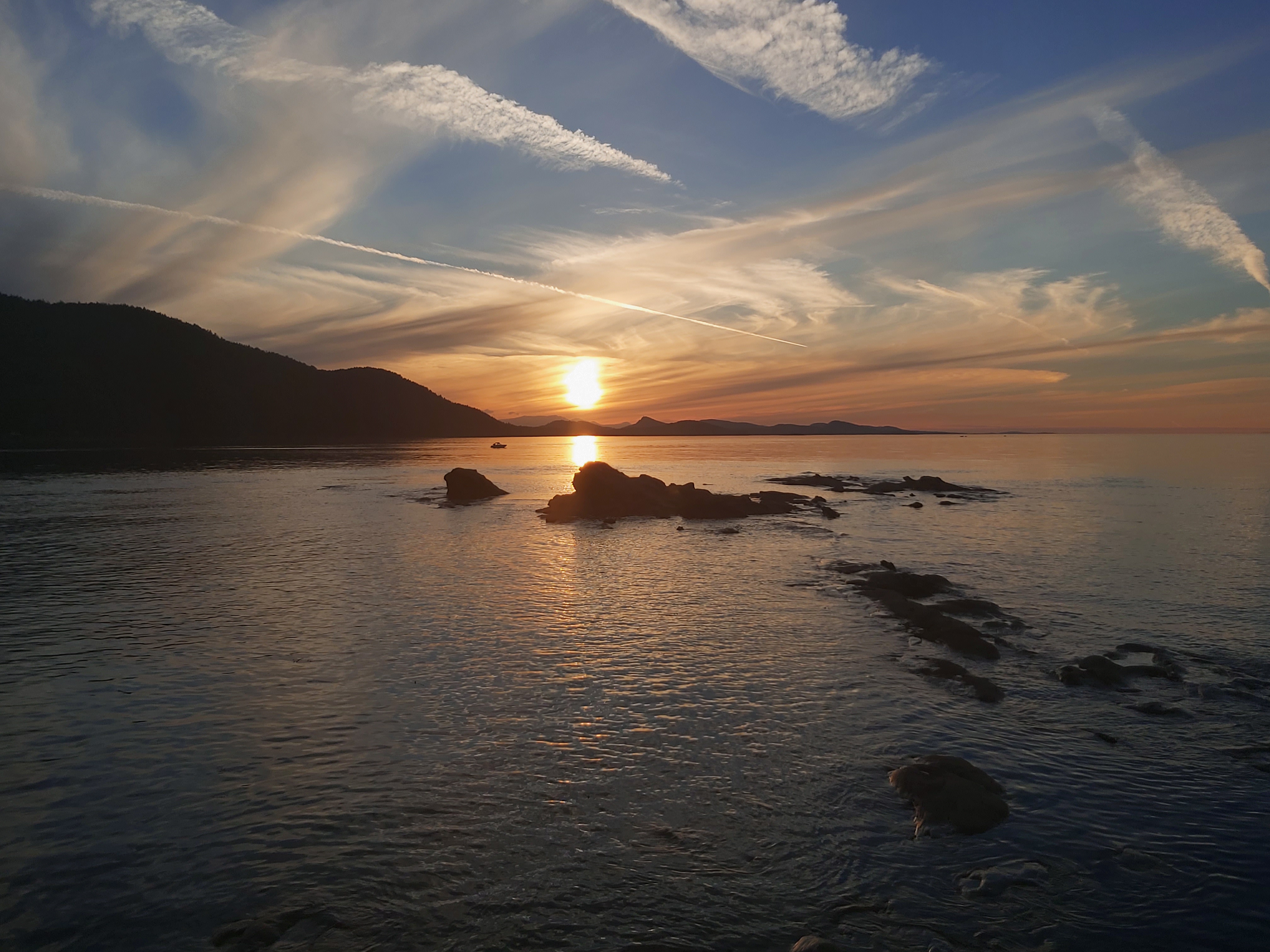 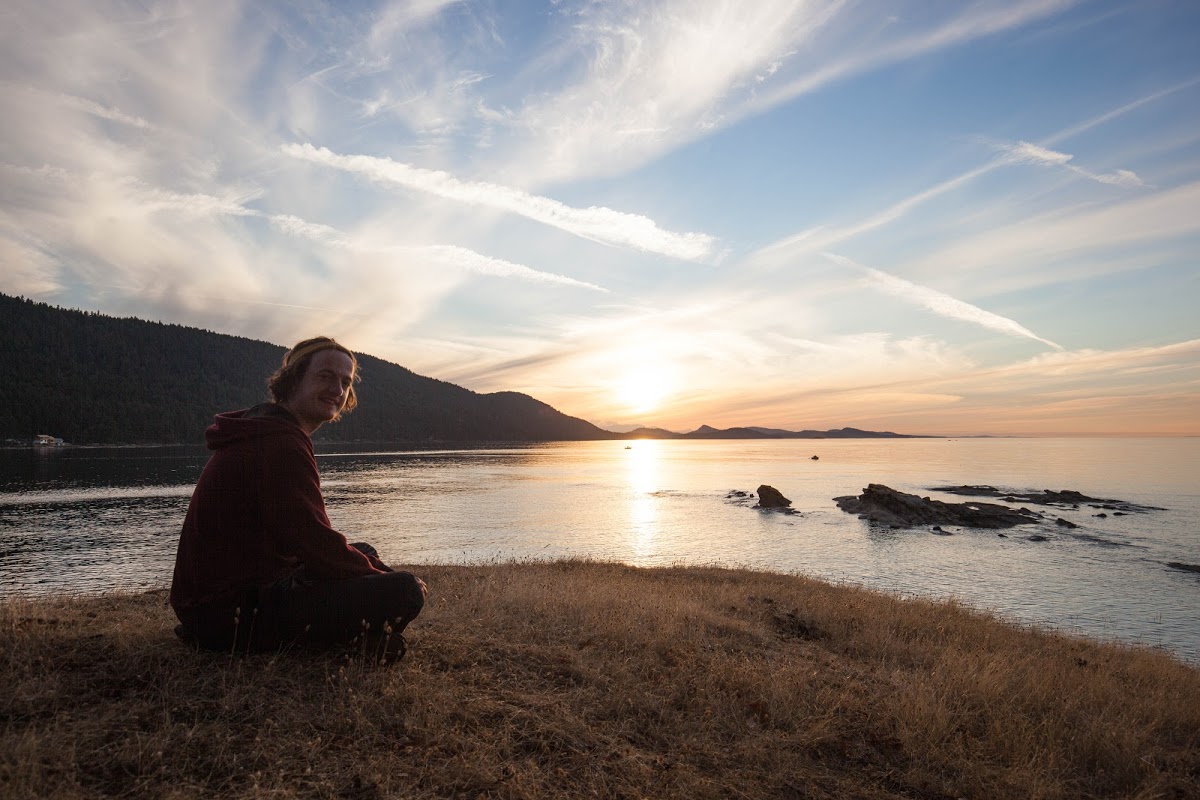 We had a challenging situation to face Sunday morning. There were already whitecaps at 8am, and the wind was not going to subside until after Monday. We didn’t have much choice but to try to make it past East Point at slack tide (10am). Fortunately we were able to safely launch our kayaks and the waves on the way to East Point was partially blocked by Tumbo Island. We made our way to a beach near East Point and beached our kayaks. Ayemin and I decided we didn’t want to kayak through the East Point current and portaged our kayaks around the point. However, Alex decided to kayak the current while Ayemin recorded it on video (see Ayemin for video). Afterward we met up and got back into our kayaks. We were now sheltered from the winds by Saturna and were safe.

The rest of the trip was a 20km kayak against the wind. It was tough but fairly easy weather as we were sheltered by Saturna Island and the waves were small. This area had almost no boat traffic and few houses and was bursting with wildlife. Ayemin spotted a bunch of eagles that were catching the fish jumping in the water. By the time it was 4pm, we made it back to the ferry. Ayemin and I got ourselves a beer while Alex went to play in Boaters Passage. We made it on the ferry home safe.

Though this was the end of the trip, it wasn’t the end of the trip for me. When I started driving home the first thing I noticed was that both the check engine light and a check transmission light were on. Whenever I pressed the gas, the car would take a few seconds and then jolt out of neutral. Whenever I tried to pick up speed the car would kick out of gear and back into neutral. I needed to make it all the way from Tsawwassen to Vancouver. Even though it was impossible for me to pick up enough speed to make a highway merge, I was able to get back to Vancouver by going 60km/h on the highway. However, on the last stretch, at one intersection I pressed the gas and the car wouldn’t even go out of neutral. I knew that if I kept trying I wouldn’t even be able to make it all the way across the intersection. The right hand turn had a downward slope, so I turned the car down that street and coasted into a parking spot next to some office buildings. Though I was safely off the road, I was stuck with a dead car (wasn’t even mine) and a rental kayak. I phoned up Alex and he was nice enough to pick me and the kayak up and drive me home, and returned my kayak for me the next day. This drive home was scarier than anything I experienced on this kayak trip!

One Response to Saturna Island Kayak