Dilly-dally to Deep Cove at Dawn for Doughnuts and Doggos

The plan: Bike to Deep Cove to catch the sunrise at 0744 hours on Wednesday and grab some doughnuts from Honey’s Doughnuts. Bike home. Easy peasy. 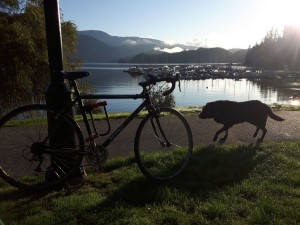 Things started off swimmingly at 0600 hours with one VOCer bailing due to sleeping through their alarm. At 0615, Claude Demers-Bélanger, Shannon Edie and Lianne met me at the Commercial-Broadway Safeway and we started towards the Shore, with Charles Polloway planning to meet us on the other side of the Ironworkers’ at 0645.

As an aside, I highly recommend going for an early morning bike ride or two. The cool morning air, starry sky and peaceful quiet are something else.

At 0640, we had our first flat, with Lianne losing her rear tire. After some struggling with putting in an oversized tube, we were back on the move. At 0720, we linked up with Charles, who had been freezing his cojones off outside Timmies for 30 minutes. With the whole crew together, we resumed our push for Deep Cove with less than half an hour before sunrise and 2 decent hills in the way. We got about 2 blocks before it was Charles’ turn to get a flat.

At 0800, with only one spare tube left between the 5 of us, we rolled into Deep Cove, had some doughnuts, spotted some doggos, admired the view, then headed home. 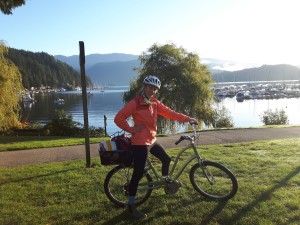 Debrief: 1 bail, 2 flat tires, missed the sunrise and forgot to take more than 2 photos to document. A resounding success for my first VOC trip if you ask me. Stay tuned for the next wacky bike ride. North Shore Triple Crown? East Van Brewery Crawl? Grounds for Coffee (Commercial) to Grounds for Coffee (Kits) alleycat race? Actually catching the sunrise? Who knows what I’ll think of while day drinking after 4 midterms, 3 assignments and 1 group project in a week.