Berg Lake: a place of blue waters, roaring waterfalls, and glaciers reaching down from jagged peaks all the way to the water’s edge. From the moment I heard about this special mountain Shangri La I knew I had to visit. The trouble was, so did everyone else last summer. This led to a lot of red tape, including a day pass quota system in addition to the existing overnight permit requirement. Yet I found Berg Lake on my mind even as I was finishing up an epic trip to Banff and Jasper (which will end up in a report eventually!). Would I be able to fit in a day hike on a weekday to beat the crowds without further pissing off my advisor back at UBC? Thankfully, I didn’t have to find out – with barely enough signal outside of Jasper I checked the permit site one more time, and to my great surprise I found one single tent spot available at Berg Lake, on a weekend no less. So I snapped that up immediately and knew then that I would be making a return trip to the Rockies in a few weeks.

Unfortunately things aren’t always so easy. As the final weekend of September approached and the trip grew near, a couple of things caused me to doubt the viability of the whole thing. First, the weather looked absolutely terrible. Would we be potentially waking up to a foot of fresh snow at Berg? Second, my partner, Jessica, had severely injured her foot earlier in the summer and it was not healing quickly enough for her to make it the 20+ km to the lake. I was dejected at the imminent prospect of driving 6 hours for a solo trip in sketchy weather. Luckily I checked the site again and struck gold a second time - a site had now opened up at Kinney Lake. Jess could make the easy 7 km to that lake, which would still put me in a great position to get to Berg as a day trip. So I made the reservation, and a few days later we found ourselves at the Mount Robson Visitor Centre, complete with a somewhat more favorable weather forecast. 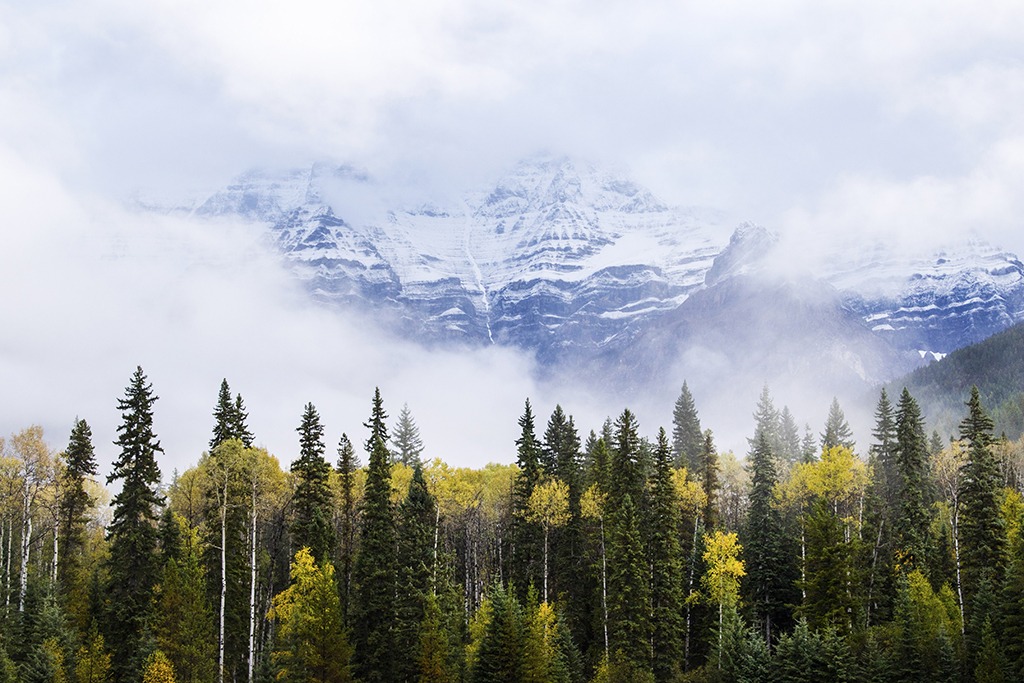 Waiting for the visitor center to issue permits was like watching glaciers move, so I took some photos of the nice scenery to pass the time.

After finally getting our “official” permit (still not sure what the point of that whole check-in process was), we hit the trail a bit later than I would have liked. But I was determined to stick to the plan and make it to Berg so that we could sleep in the next day and have a leisurely hike out. 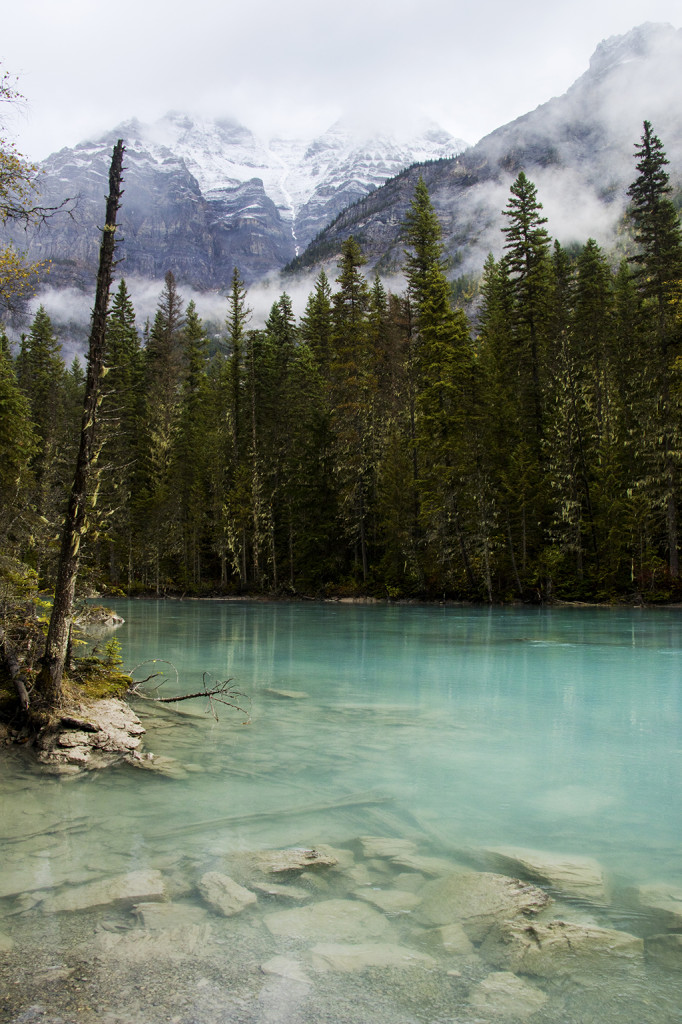 The soothing blue waters of the Robson River calmed my worries about running out of daylight on my hike.

It wasn’t very long before we arrived at the beautiful Kinney Lake, though there was still a ways to go to the campground. 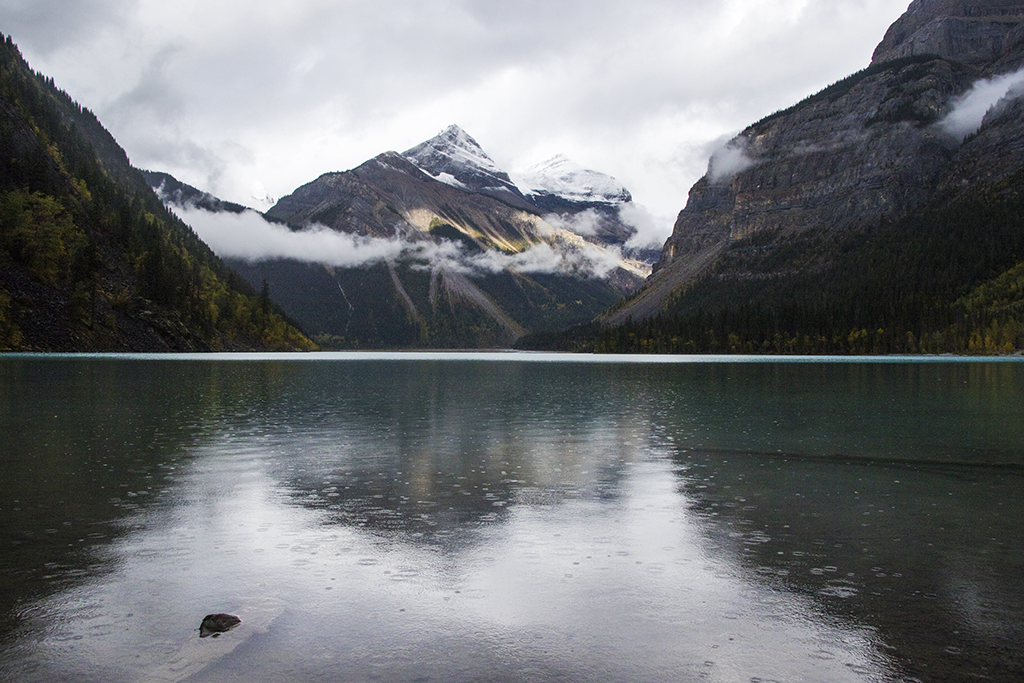 A bit of rain started to fall at Kinney Lake. The storms would come and go in waves throughout the day.

After hiking around the lake (with a bit of seemingly unnecessary uphill) we arrived at the campground and found plenty of open tent sites. 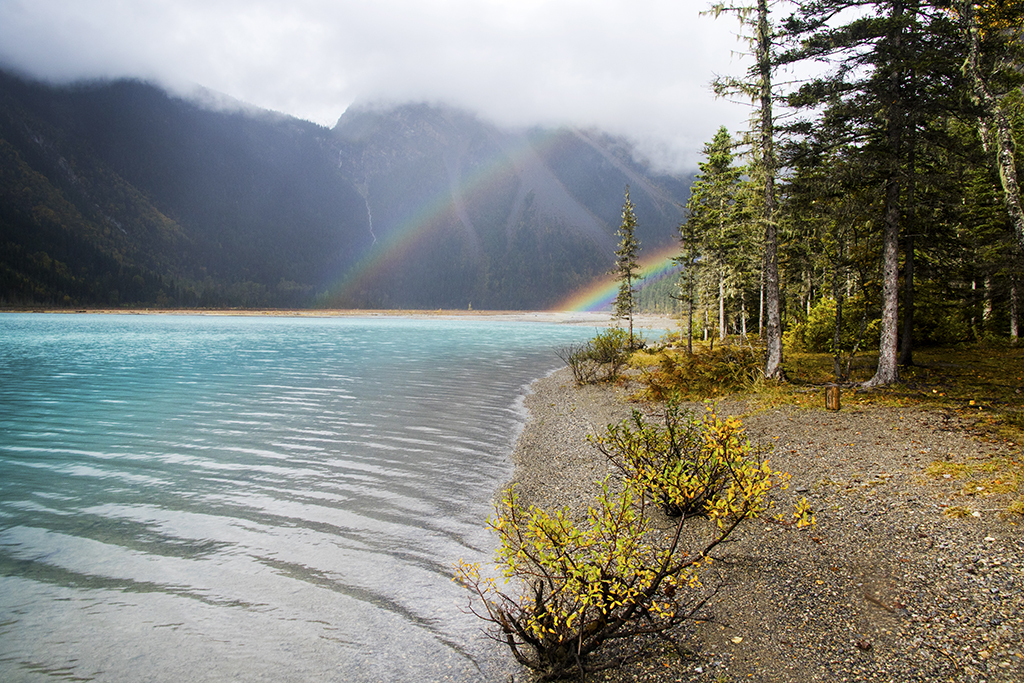 The views from the campsite were alright I guess. I had really struck gold with the campsite reservation.

It was time to scarf down a quick lunch and bid Jess adieu for the day – I had a big hike to complete and not a lot of time to do it. She had the enviable task of holding the fort back at camp, with plenty of time for drawing and relaxing. I wondered briefly if I should join… But Berg Lake was calling and I had to answer. So I returned to a style of hiking that I hadn’t used in quite some time, which I guess could be described as speed hiking. Not quite trail running, but I was intent on booking it up to the lake so I could have time to enjoy it without having to return in the dark.

Again, this was a good idea in theory but was immediately called into question in practice, as the trail markers led me on a confusing detour around a broken bridge. More lost time that would have to be made up. However, it wasn’t that long until I was past the detour and able to cruise up the very well-built trail. The rain started again just after I left the campsite. 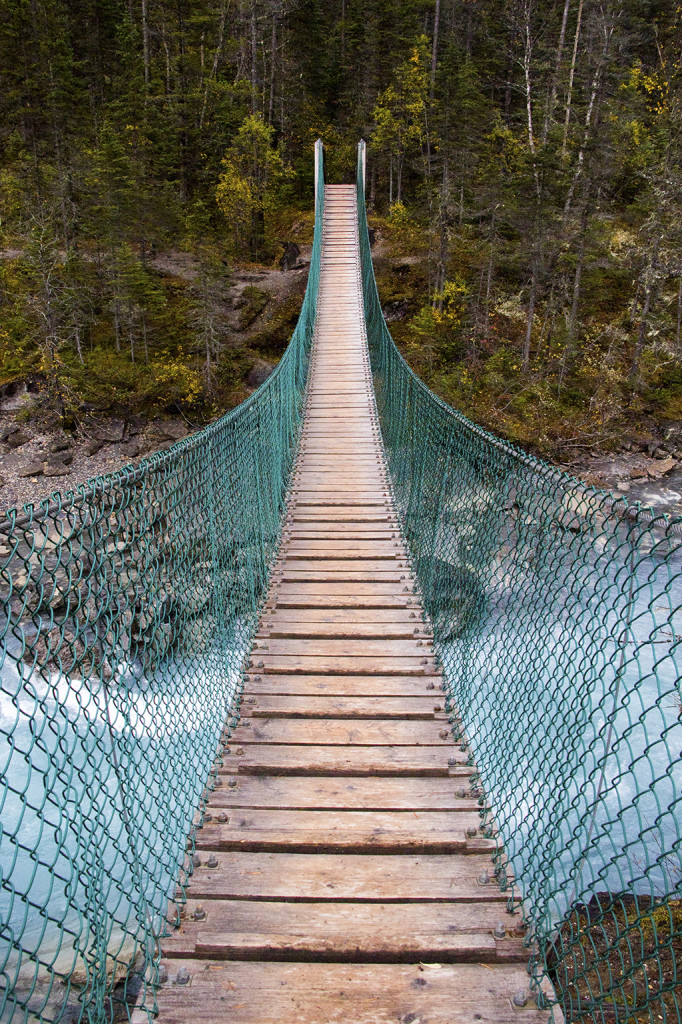 One of a few crossings over the spectacularly blue Robson River.

As I checked my progress on the map I realized another cool thing about this area I was now exploring. The map called it the “Valley of a Thousand Falls,” which sounded familiar for some reason. I soon remembered a conversation I had had several years ago with this crazy older dude on a backpack in the Grand Canyon: he had spent the previous night hiding from a storm under a rock outcropping (part of which had collapsed right next to him) and was now regaling me with stories of all the amazing places he had visited in his life. “There’s this place called Valley of a Thousand Falls up in Canada; you should definitely check it out sometime man” or something to that effect. So I had unwittingly stumbled upon one of this dude’s recommended spots, which I thought was pretty cool. 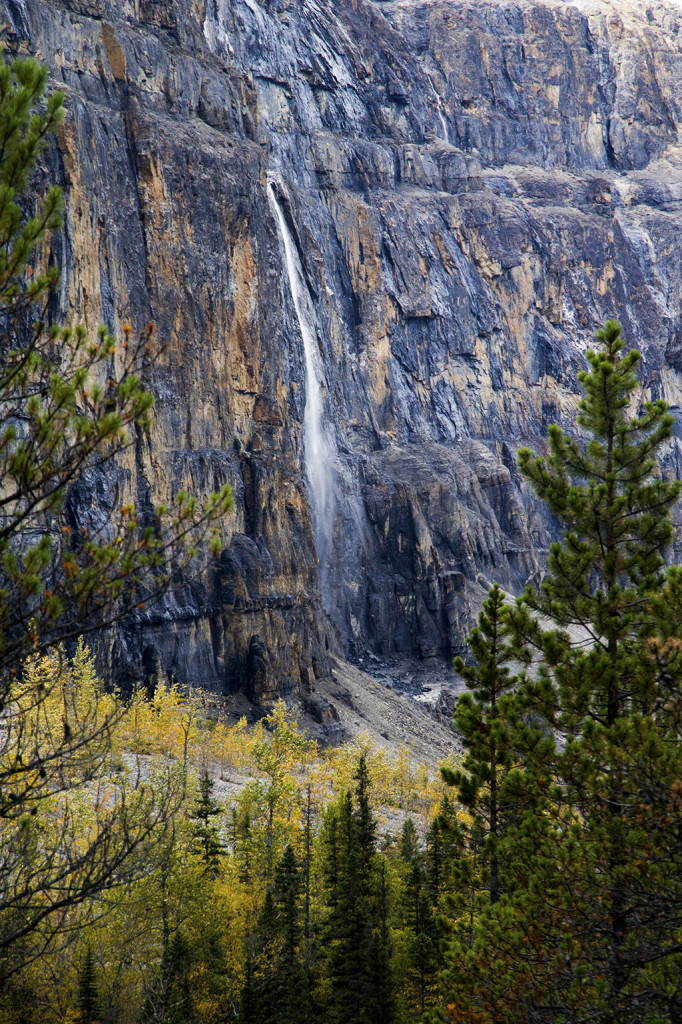 Don’t know if there are really a thousand falls, but there are quite a few.

The trail steepened a bit as it went up the valley, but overall the elevation change was barely noticeable thanks to the well-designed trail. 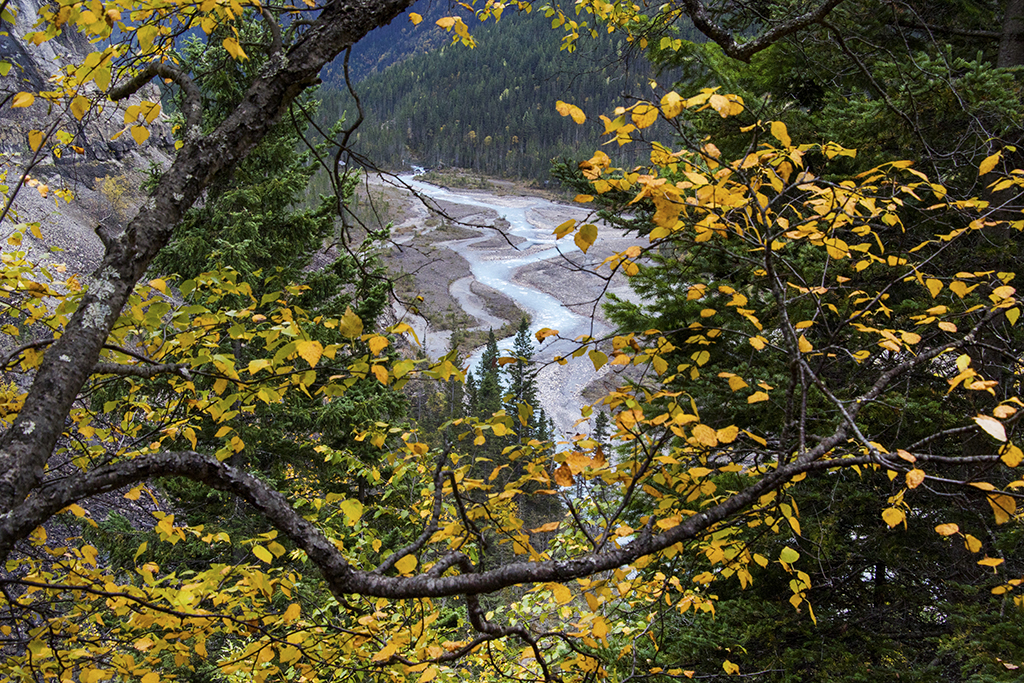 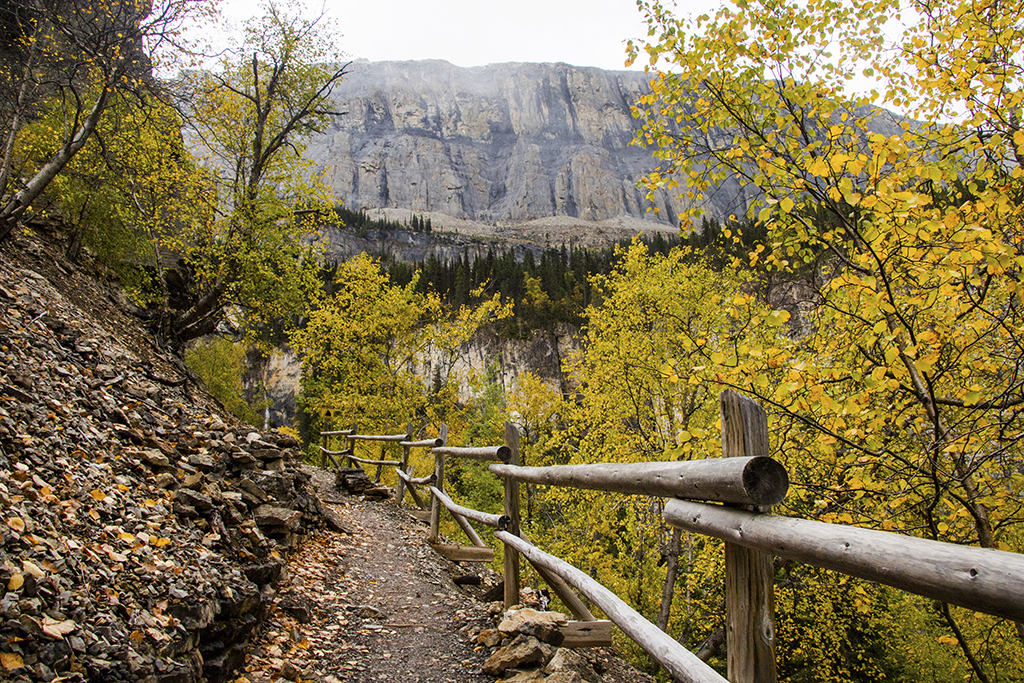 What a nice trail.

It was hard to go too fast as I had to keep stopping for photos. First world problems I guess. Eventually I came to the junction with a trail to Emperor Falls. It’s certainly worth the very short side trip: 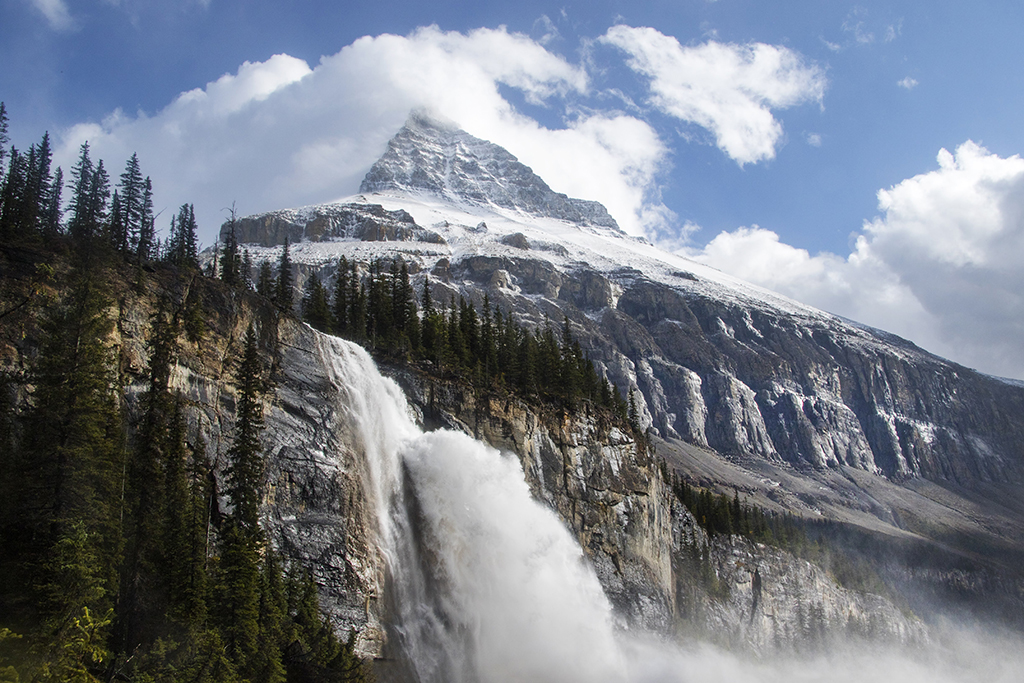 The sun came out right as I arrived at the falls.

I don’t remember how many campgrounds I passed, all I know is that it was a lot. None had filled up though, which was a bit surprising that late in the day. 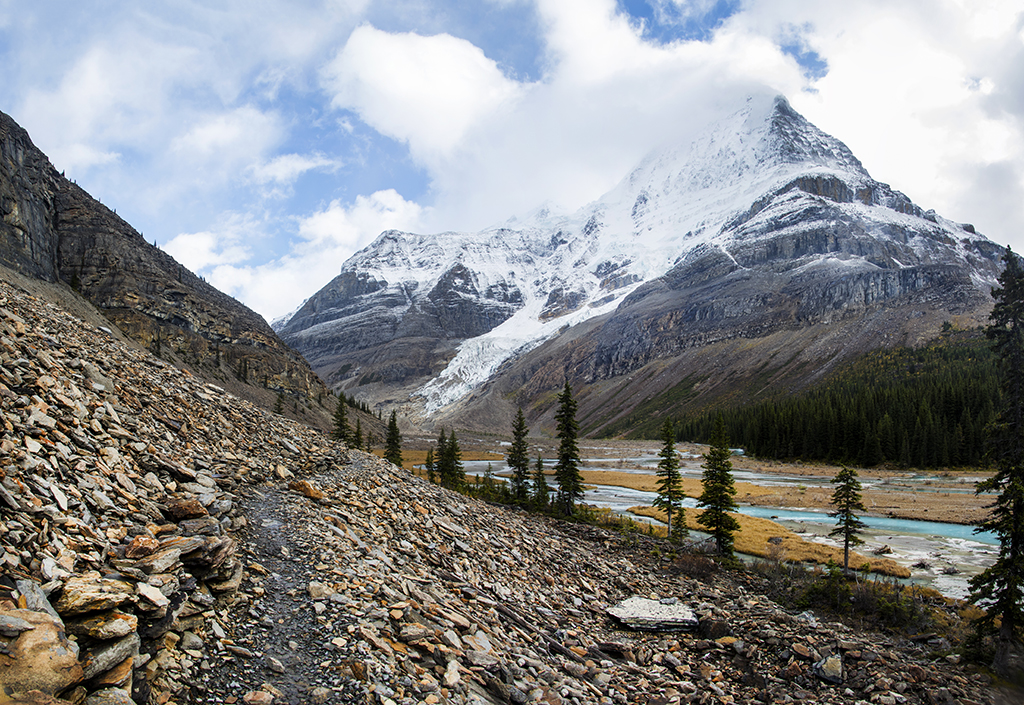 The slopes of Mount Robson on the final approach to Berg Lake.

As I passed a group of backpackers near Berg Lake we heard a rumble from the nearby Mount Robson. We all looked just in time to see a huge chunk of ice fall off of a hanging glacier and crash down the slopes. A reminder of my favorite mountaineering quote from Gerry Roach: “Geologic time includes now.” The aftermath of the glacier collapse. Note the drifting snow/ice just left of center.

Finally, the lake appeared in my view and soon I was at the shore. A closer look at the glacier.

I had made it to the lake under budget and ahead of schedule in a cool 3 hours of hiking from Kinney. After a nice 45 minutes of lounging by the lake it was time to leave since I didn’t feel like navigating the chaotic trail detour in the dark. The hike back was mostly uneventful, save for a bit of fun wildlife on the trail. 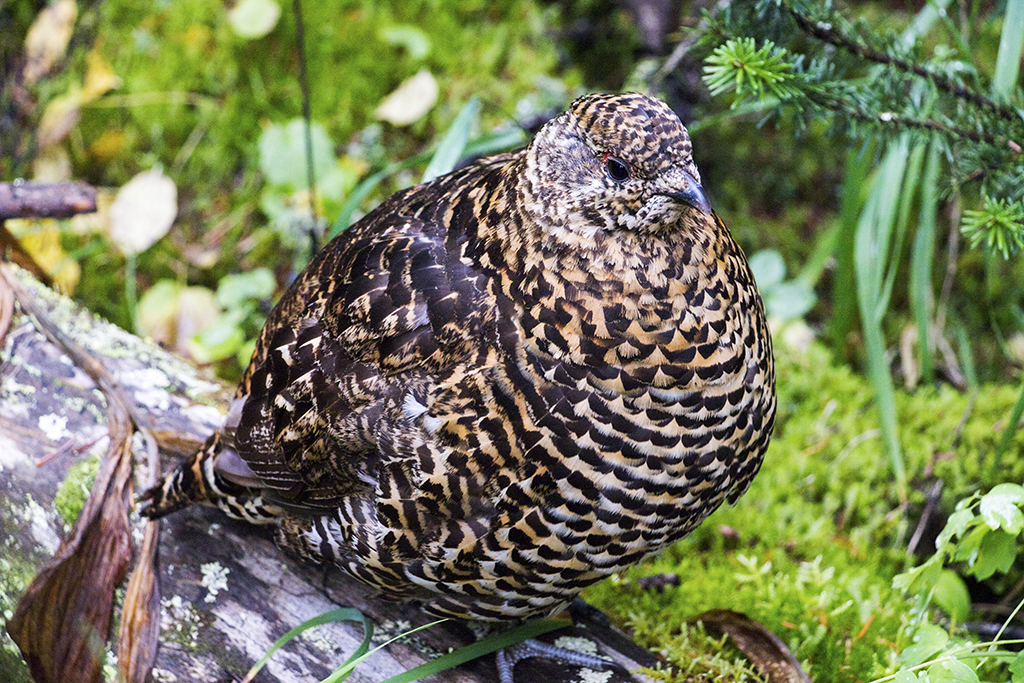 On the way back I had a chat with this friendly grouse. “Brep?” I said to it. “Brep” was the reply. We went back and forth like this before I asked the real question troubling my alpine-addled mind: “Is the natural state of the soul quiet or chaos?” “Neither,” said the wise mountain chicken, “it’s transient, shifting like water.” I left it at that, and brepped farewell before continuing on my way. Another of the Thousand Falls. Grand Canyon dude was right, it’s a cool place. Crossing the Robson River one last time on a make-shift bridge from BC Parks.

I had finally returned to Kinney, with some time to spare. All told it was less than 6 hours of hiking round trip from there, which was better than I had hoped. Though it’s way nicer to take your time and enjoy the scenery!

I found Jess back at the shelter; she had enjoyed a relaxing day, including a short hike up the valley. I was happy to have time for a real meal before the sun set, then it was off to a well-deserved rest. I woke up quite late the next morning with a bit of soreness, but the 7 km left to the car didn’t seem all that daunting. The reward for getting out of the tent. This butterfly decided to hang out as we were packing up. It even let us hold it. There were still lots of fall colors to take in on the shores of Kinney Lake.

I had much to reflect on as the trip came to a close.

I’ve heard of plenty of people doing Berg Lake in a day, but I’m a bit torn on whether I’d really recommend experiencing the area that way. If the situation had been more ideal I would’ve much preferred to spend at least one night there, if not more. But I am very glad and very fortunate that I got to see it, one way or another. Maybe I’ll plan another trip there next summer…