Posted on February 13, 2021 by Jeff Mottershead

The avalanche forecast was considerable-moderate-moderate, despite there being a lot of fresh new snow in the forecast, so it seemed like an ideal time to get back up on Bombtram and get on the steep south face in a relatively safe manner and enjoy powder all the way down.

Things started going off the rails before we even got there. The road started to get pretty snowy and slippery. I was driving at 70 in a 110 zone, on a straight stretch, and still ended up sliding around. For what seemed like an eternity I’d slowly rotate while trying to keep the front tires aimed straight forwards, then one of the back wheels would catch and we’d slowly rotate the other way. Eventually we slid into the concrete divider, but lightly enough that the only contact was with the tires, and we would have bounced off entirely unscathed if there hadn’t been one of those diagonal striped black and yellow signs that they like to put on dividers. I clonked it with the mirror and cracked the glass as I was moving away from the divider.

After the impact, we were still sliding around for a while but eventually got the vehicle under control again and slowed down to 40.

No one had been to Bombtram that day, so it was steep trail breaking through deep snow all the way up. Even though I was doing all the trail breaking, there was enough snow falling in from the sides that it still kind of felt like breaking trail for Devlin. The combination of heavy slogging and a really slow drive had us at 300 m below the summit at 4 pm. Although the avi forecast was not bad, and the new snow seemed to be bonding well, the amount of new snow, which was between 40 and 60 cm, depending on the aspect, made it seem like we should treat the avi hazard as more than moderate at the treeline. We decided to go down a line on the Baldwin map labelled “Sentors.” As is fairly common on the Baldwin maps, the top of Sentors started well below the dotted line for the skin track. Seeing as Sentors was quite steep, Baldwin probably didn’t want us to just ski up the descent line. Likely if it wasn’t cliffy above Sentors, Baldwin would have extended the line up to where it met the ridge. I guess he wanted us to just be there, no questions asked. 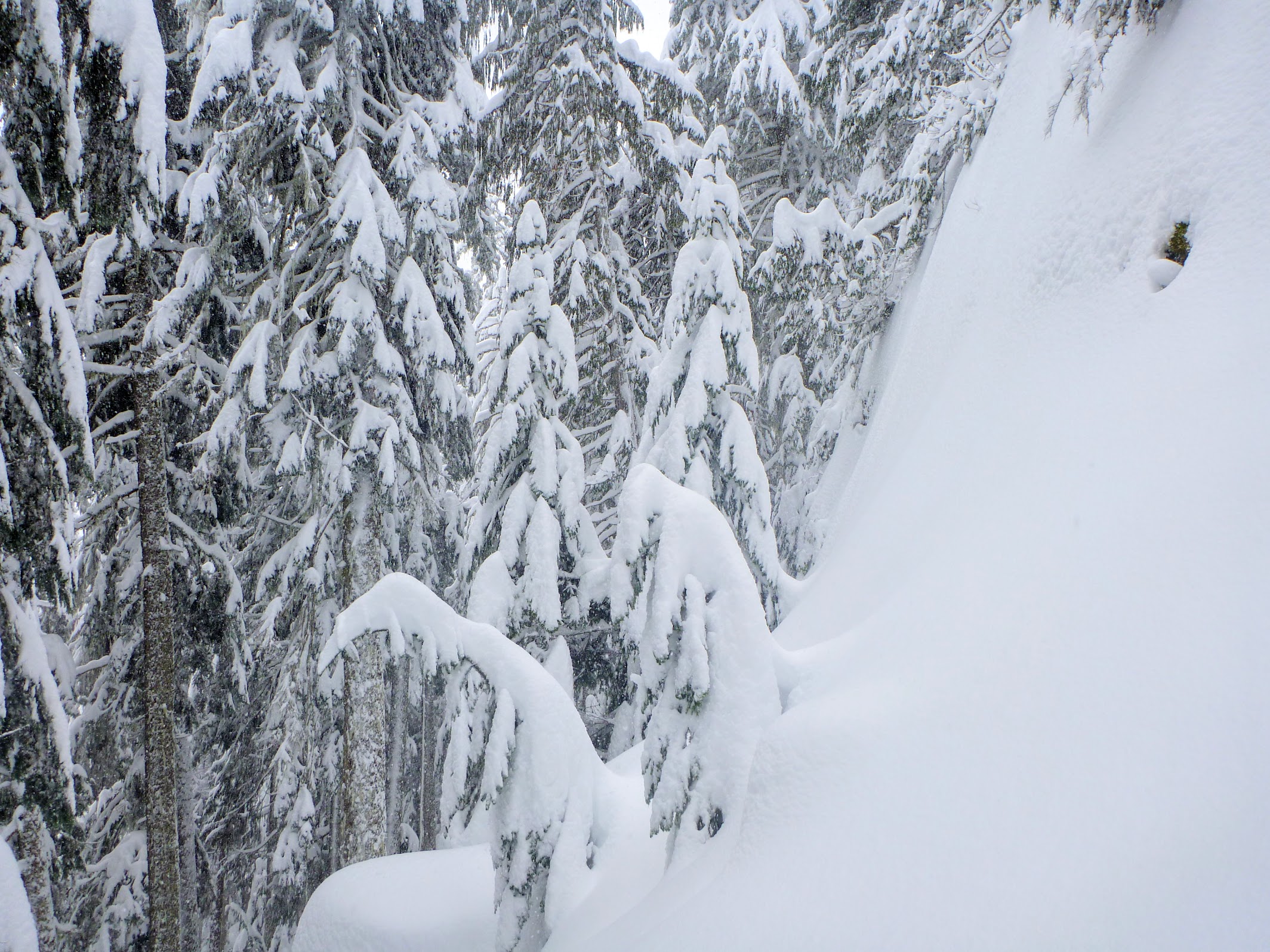 There were lots of steep bits like this to go around on the up track. I tried to make them slide and couldn’t get more than a little sluff.

We transitioned to downhill mode, and I got about a quarter of a turn in before a decent slab released under me. Devlin followed on a slightly higher line, and he broke off the section between my track and his. It was definitely steep below us, but it was uneven terrain and dense trees, so not the stuff that’s conducive to a large slide. It was clear that every bump we were going over was probably going to slide, so we’d have to pick our way down very carefully. 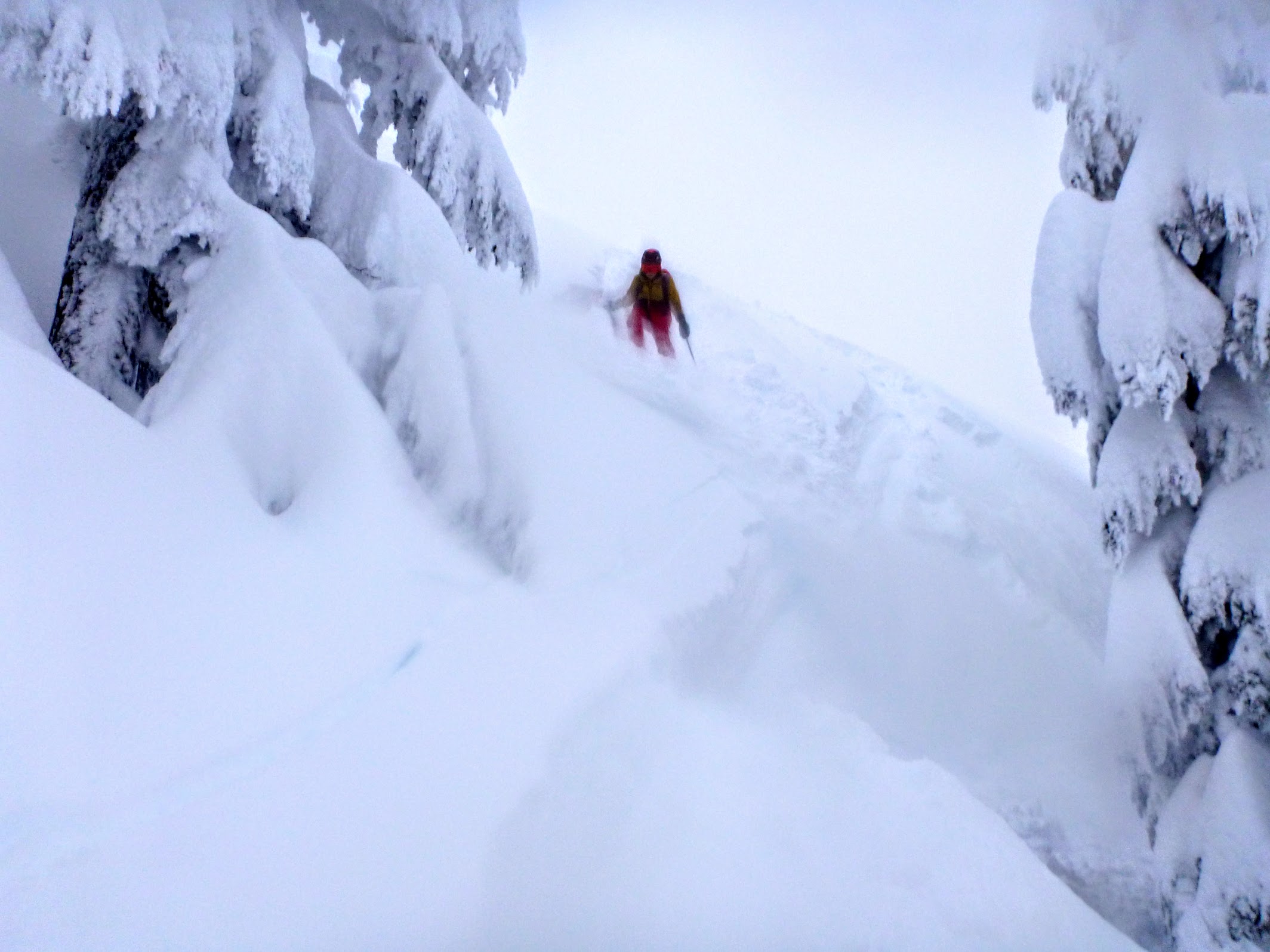 Devlin going down the first bump

It didn’t take too long before we were probably cliffed out. Below us, it rolled over and the tree tops disappeared. It could have been a steep but skiable slope, maybe, but the prospect of getting to where it really rolled over to get a look was a non-starter in the conditions we were in. I shuffled along to the left, trying to get around the cliff and came to a thought-provoking location. There appeared to be a continuous descent starting about 30 m to our left, but to get there I’d need to cross three wicked-steep little chutes. About 15 m down, they appeared to go over a short cliff, maybe 4 m high. At the top of the cliff there was an assortment of deciduous material that wouldn’t slow down snow very much, but may or may not strain out a skier. I spent a while thinking about what would happen if it slid, whether being hung up in the trees was better or worse than flopping over the edge, and whether it was really a cliff of whether it just steepened enough that I couldn’t see what was going on.

I eventually started across the first chute, and as I got to the middle it slid. I didn’t go with it, though, and just ended up standing beside the crown, watching it slide through the trees and over the edge. I didn’t pay too much attention to how high the crown was, but it interacted with the pit zip on my jacket, and snow ended up going down the inside of my jacket. That probably makes it sound bigger than it was; I was on a steep slope a foot beneath it, and I sunk into the layer below some too. Still, though, it was enough of a drop to get me more disturbed than I was before.

The crown was much thinner on the ridge between the first and second gully, and it seemed relatively stable there, so I got Devlin to join me so that I could watch him through the first gully and he’d be able to see if the second gully slid. It of course did, and I again found myself lounging on a hefty crown watching the snow go through the trees and over the edge. The same thing happened on the third gully.

Past the third gully, there was a rounded lump with a snow-free cliff above it and steep terrain below. I ski cut around the edge of the lump, hoping to clear out a descent path, and everything beneath me let go. Despite being really uneven terrain and filled with trees, it went as far as I could see (only about 20 m) to either side and dropped over a cliff in front of me. A big cloud came up when it landed, and it continued until I couldn’t see where it went.

In order to get around the bigger cliff that the slide went down, we traversed left, through some tight trees overlooking a mini-bowl that ended in a narrow chute. I gave it a ski cut along the top, and it broke off and went down the chute, giving us a safe descent. We rejoined the earlier slide path and followed it down to the start of Sentors. 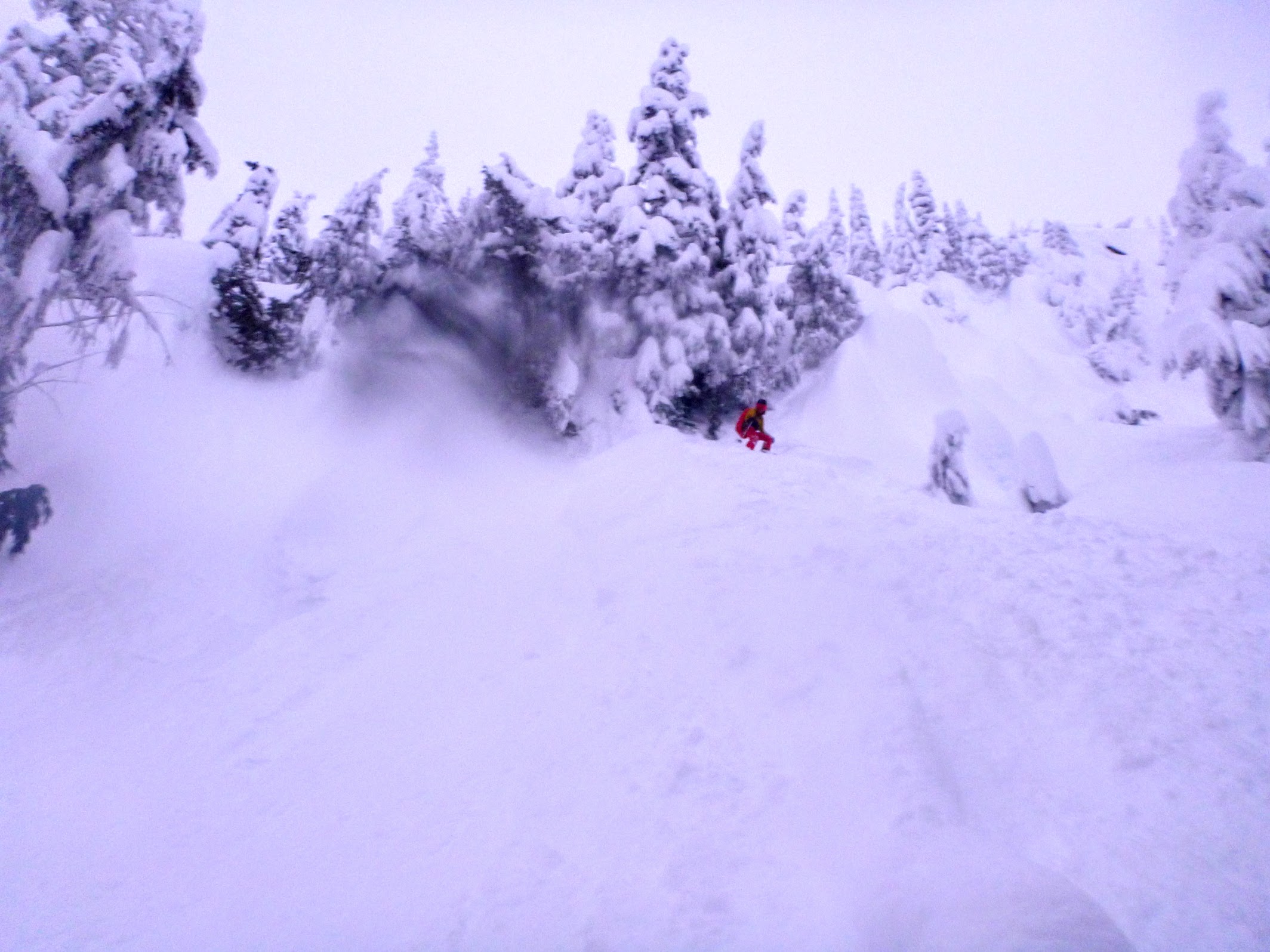 Devlin has just come out of the little chute, onto the debris that came down the chute. The main slide is to looker’s left, out of view. 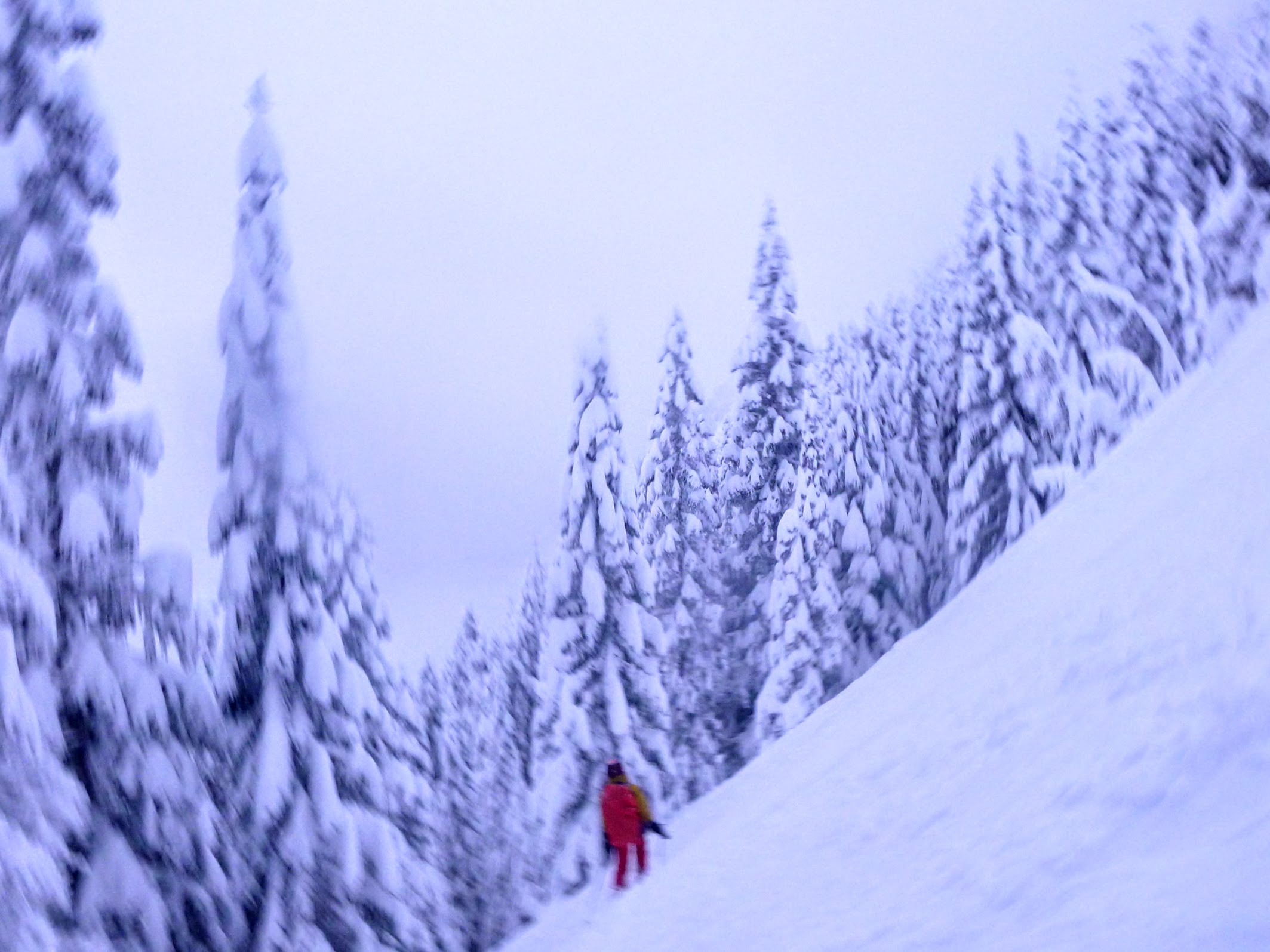 Safe travel on a slope that had been entirely swept by the slide, about 250 m from the start

Sentors itself is a tree-free creek bed in otherwise dense forest. It was for sure a terrain trap, but fortunately our debris continued down the middle of Sentors to halfway down the run. With the major risk out of the way, the ski down was delightful, in the deepest, softest powder I’ve ever been in. Storm slabs were breaking off at every turn, but since the middle of the creek bed had already been cleaned out, everything that came from the sides just went to the middle of the creek and stopped.

The drive home was an adventure, too. The highway was closed from 7:15 to 9:30 pm because of a giant crash. While we were waiting, I put the chains on and was glad that I did, because people were going all over the place and trucks were getting stuck in the middle of the road.

I put up the avalanche report on the Avalanche Canada site and noticed a bunch of other reports from the Coquihalla, including one very irate dude that blamed Avalanche Canada for a bunch of people getting buried. I’m pretty sure that lots of people are willing to knock the danger level down a rating or two if there’s less snow than forecast, but it’s not clear how many are willing to bump the danger rating up because there’s a lot more powder than was in the forecast. We bumped it up a notch and scaled back what we were going to do based on conditions, but in retrospect it’s clear that we should have moved the below-treeline-danger level up two notches to “high” and gone back down the skin track. The lack of stability where we went down was kind of surprising, since the track up has lots of little steep things we needed to go around, and I cut many of them to see if they’d slide, and none of them did.