History, the Hut and the Debacle: A long time ago the VOC built the Whistler Cabin, and then the AMS decided they wanted it and  AMS was reluctantly persuaded to give VOC money to pay us for the “sweat equity” that we had invested to build it. So VOC had money, and decided to build the Harrison Hut to commemorate Julian Harrison who had been Club President and had tragically been killed in an avalanche.  The rest of the money went to build Brew Hut#1.  Brew#1 was in a bad location and lasted about a year until it was destroyed by snow creep.  The Club said “not to worry, we’ll move it over there”  So Brew#2 was built from the remains of Brew#1.  Brew#2 lasted until 1999, when the snow was 2m over the top of the roof.  Hut was partially crushed by the snow so we decided that Brew#3 should be built, but with new wood and a better location, and a new design.  It was built in 2005 and that winter we were keen to visit it.  My GPS was cold and was hallucinating badly so we didn’t get to the hut until 4:30a.m, 17 hours after we started.   That was the original Debacle.  I didn’t personally drink any urine on that trip, because there was plenty of snow in case you were thirsty, but some VOC people are just strange.

When I took Carla and the kids up to visit Brew #2, there were various routes to the hut, but the one that was fashionable at the time was the route up from Brandywine Creek and going past the “Gully of Death”.  We all got up there and son Jeff, then eleven years old, even managed to climb Mt Brew, and wrote a journal article which you can find in VOCJ45 2002-2003 p84.  Jeff had been up there previously when he was seven, but apparently at seven years old, you do not write journal articles.

While building Brew#3, Scott Nelson and others built the trail “Brew via Roe” and that is the route used by the original Brew Debacle.  That was a lovely trail with no avalanches.  Last fall the loggers  removed the bridge across Roe Creek,  Some of us decided that the hut needs a trail so why not try and rejuvenate the route up from Brandywine Creek?   Twenty years of shrubberies couldn’t be that bad?   With winter just around the corner, the club panicked and this is the fourth attempt to rejuvenate the trail.

This Trip:  What was our carload trying to accomplish?  We wanted to find out where the snow line was, how far the trail rejuvenation had progressed, and to decide if this route could be the chosen route for this year’s Debacle.  Finally, we were hoping to do a bit of reminiscing about when we took the kids up there.

We left the house at 7:30am.  After a few stops to explain to the GPS what we were trying to do, we finally parked the Jeep beside the other four VOC cars at 10:00 and charged up the rejuvenated trail.  Whoops, we were supposed to take the left fork.  Apparently one of the previous trips had rejuvenated a piece of road that doesn’t go anywhere.  We backtracked and took the correct fork but we had wasted about an hour and turn-around time was 2pm.  So we hurried a bit.  We threw some slide alder off the route.  The old logging route had been rejuvenated really well but pieces of slide alder were frozen into the mud.  Soon it was almost turning back time and we were getting ready to do that when we were very happy to hear a chainsaw.  So we did catch up with the tail-end of Ross’ crew and chatted briefly before heading down.  Still no snow.

Conclusions:
• Somebody should fix the Lions Gate Bridge.  It took us an hour to get across it on the way home and I don’t know why.  Carla drove, and she was annoyed.
• Did we bring the right stuff?  No skis.  Left the gaiters and snowshoes in the car.  Gloves were good.  Hiking poles were good.  Microspikes were not needed.  We guess that higher up we might have used the snowshoes but just boots looked OK.
• The distance from where we parked to where we met Ross’ party is 2.3 kms. Total trail distance from where we parked to the hut, assuming I know where the trail will go is 5.9 kms, so there’s still a way to go.
• Did Ross’ party sleep at the hut? Did Cassandra repair the door knob?  You have to ask them.
• Should this year’s trip use this route or should they use the Tyrolean via Roe?  If it was my trip I’d go via the Tyrolean and use snowshoes.  I’ve been that way, see https://www.ubc-voc.com/2021/07/09/brew-hut-via-roe-cable-july-7-8.  The Tyrolean can be fast if it’s well supervised.  The Brandywine route seems short but that’s because so much of it is driving and all this driving won’t happen when the snow arrives.  But it’s not my trip and its not for me to decide.
• The reminiscing didn’t go very well.  We couldn’t recognize anything from twenty years ago.
• Overall, our trip score was a seven.  We didn’t accomplish much, got some exercise, beautiful weather and scenery.  We lost points on taking the wrong fork but we hung some ribbons to save others from this fate.  The trail could use a lot more ribbons and trail markers, and some people could be useful by just throwing slide alder off the trail. 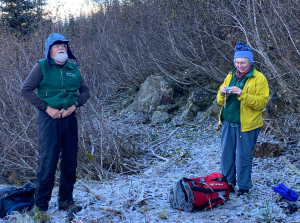 The author trying to fix his pants, Carla messing with the camera, picture by Phyllis