Posted on February 22, 2022 by Settare Shariati 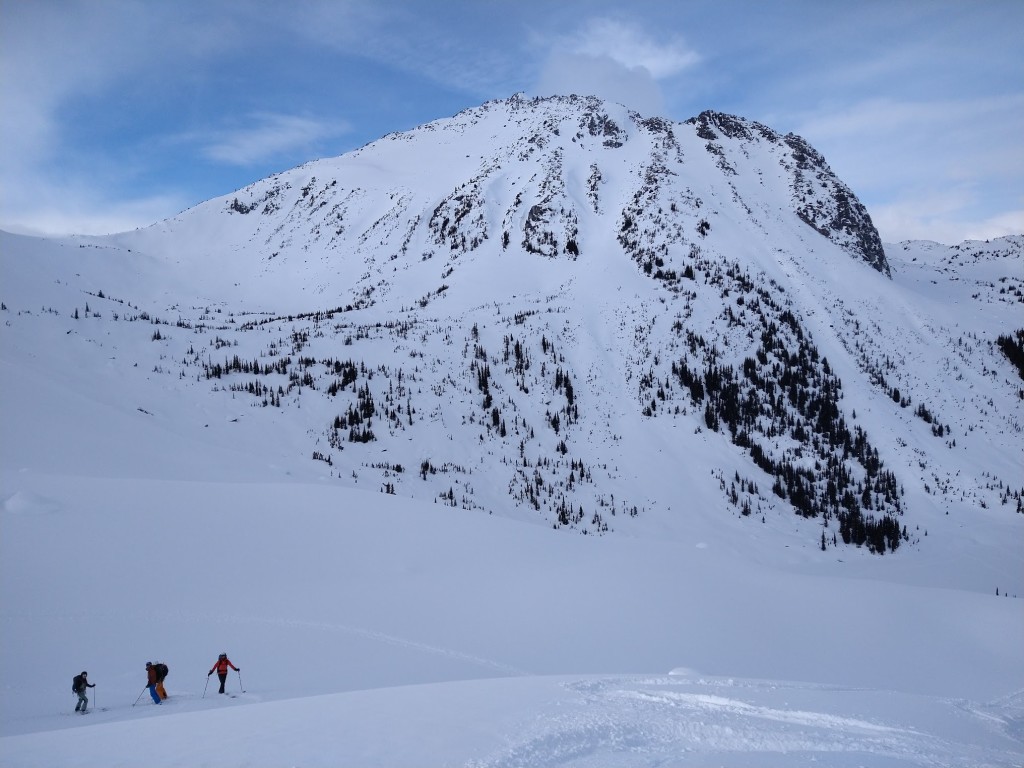 The moment I stepped out of the car on the icy parking lot of Phelix Creek trailhead, my feet slipped out from under me, and I found myself hanging up in the air in an L-seat for a second before dramatically crashing to the ground, thanks to the almighty mistress that is gravity.

“That’s a good start!” Yelled Ross, walking around nearby with his kilt over his orange snow pants.

It was the morning of February 19th, 2022. After a long hiatus (thanks to the COVID-19 pandemic), a long, faffy Zoom pre-trip (again thanks to COVID), a thrift-store haul for some to find tartan, and a long drive up to Pemberton, fifty-two (?) VOCers gathered around to make the annual Burns ‘n’ Turns trip possible again; celebrating Robbie Burns night, and commemorating our late VOCer friends who came up with the original Burns ‘n’ Turns.

We started skinning (or snowshoeing) up the trail in groups of five (Ross’s idea to organize people into small groups to prevent having people lost in the bush or left in tree wells at midnight). Some creative folks were skinning in kilts, tartan pants, or a tartan shirt wrapped around their waists. Less-creative folks were wearing boring Gore-Tex pants. 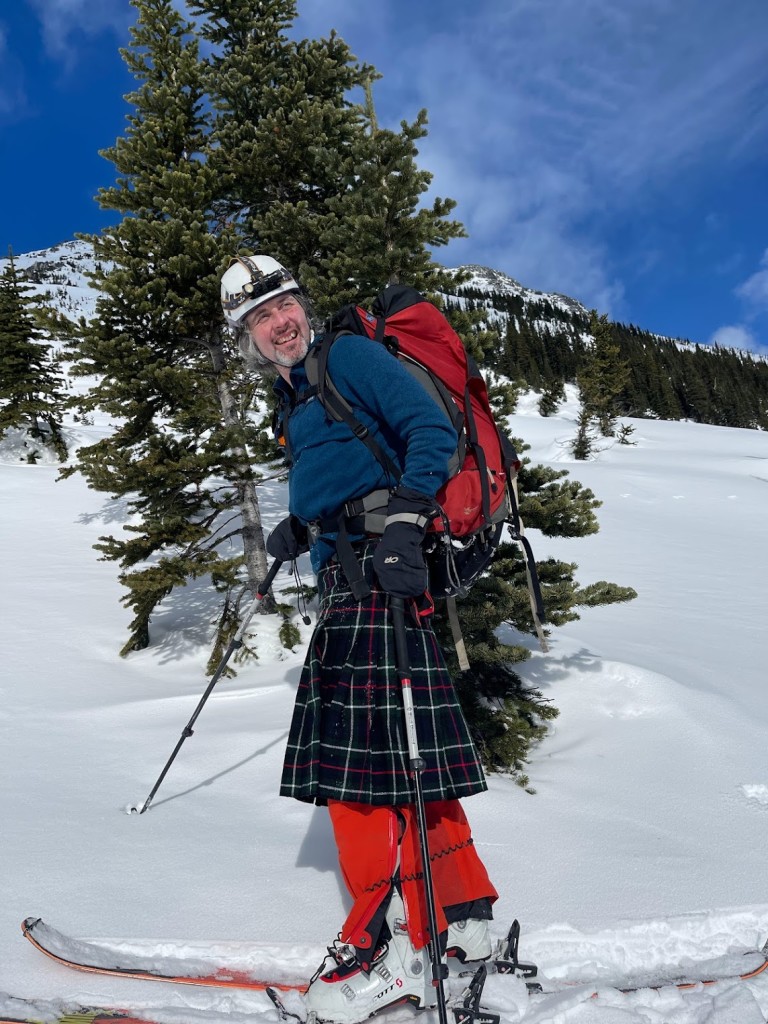 From there, things went differently for people. Everybody made it up to the hut safely, somewhere between two and eleven hours after leaving the trailhead. There was a healthy amount of faff involved: suffering up extremely icy tracks, many falls, many bruises, losing a sleeping pad down a gully, having Declan ski down to retrieve the said sleeping pad, walkie-talkies not working, people losing their groups and re-grouping with others, and so on. 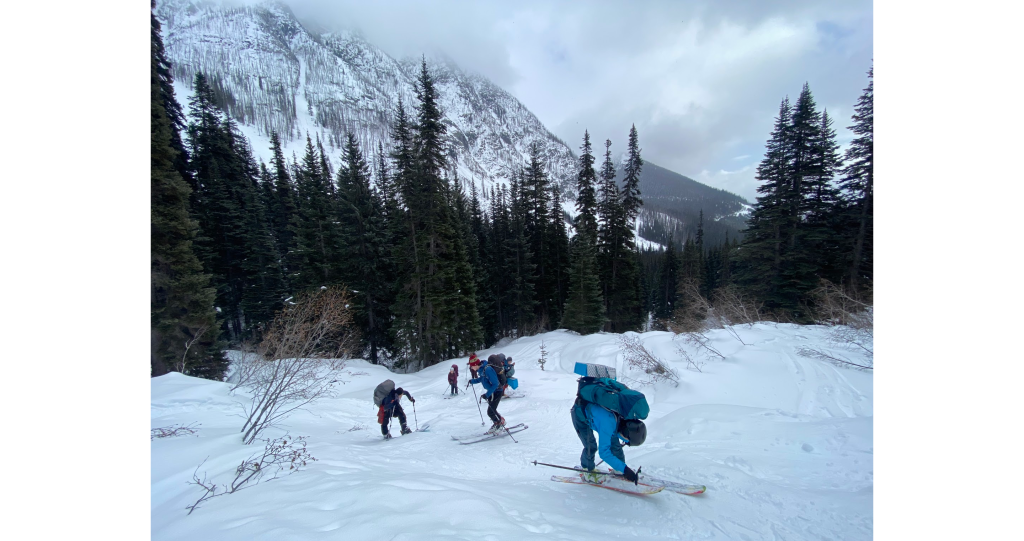 Suffering up the trees | Photo by Kai Schwarz

I was suffering until I stole (kindly borrowed) Kai’s ski crampons, and then I zoomed my way up to the hut. I was hopelessly miserable up in the trees, but as soon as I saw the hut on the other side of the snowy lake, last rays of sunshine beaming on the mountains beyond, I forgot my pain and anguish and powered through. 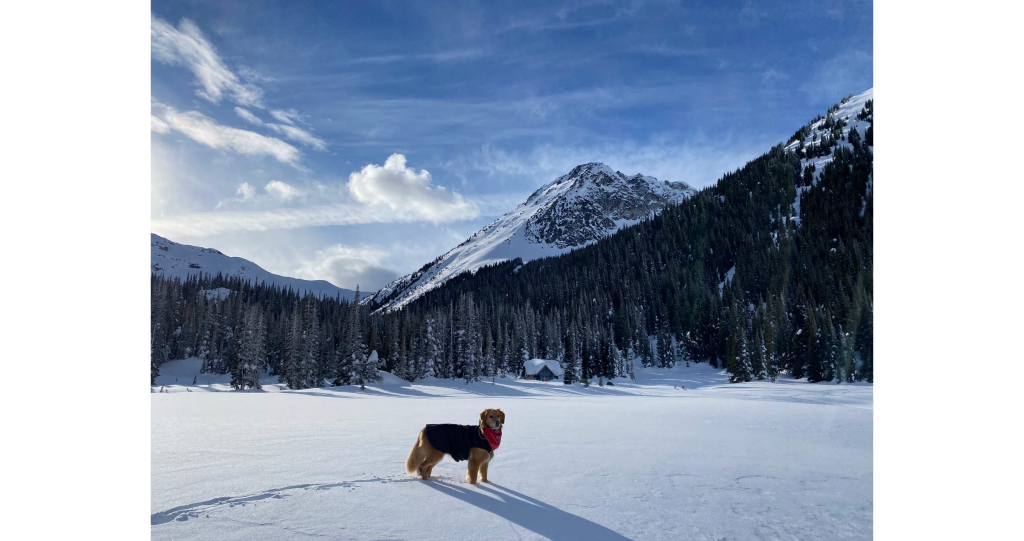 The hut emerging in the distance. Buddy looking jolly | Photo by Settare Shariati

That afternoon, some early-arrivers went to explore and do laps. Some stayed in the warm hut, and some kind souls skinned back across the lake to bring hot chocolate to the people still on the track, help shuttle their packs and boost morale. Finally, around 9pm when Ross, who was sweeping, entered the hut, everyone welcomed him in with warm cheers and applause. 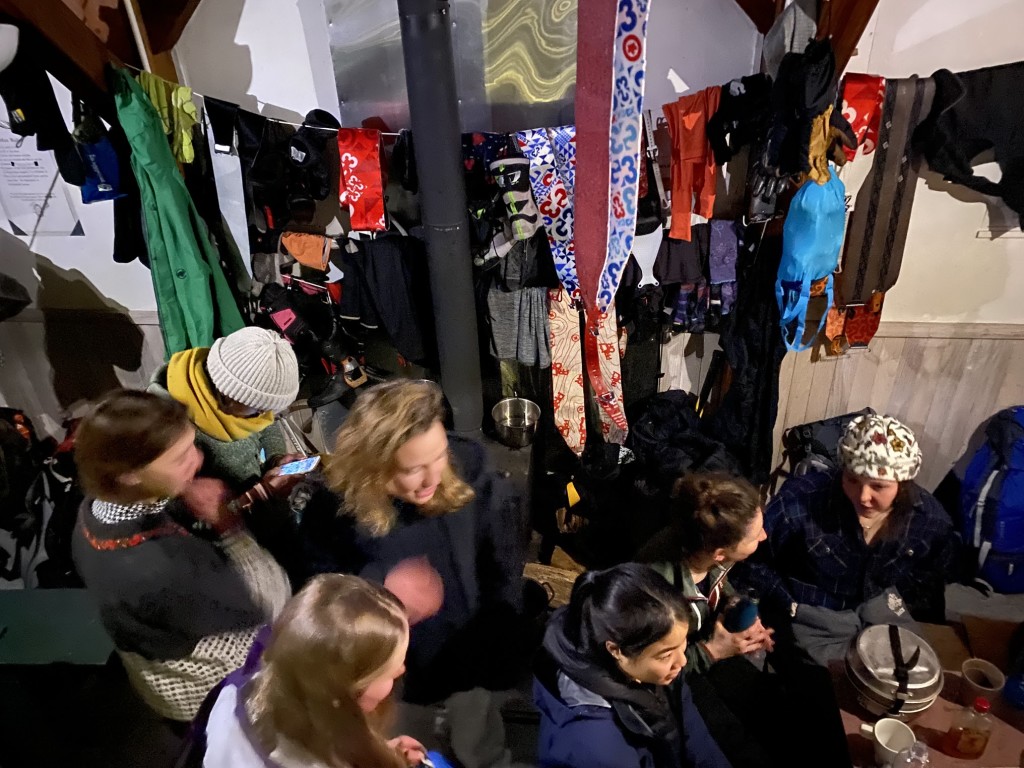 Hustle at the hut | Photo by Settare Shariati

We went to sleep happy, tired and full – some people preferring the privacy of their cold tents and the others playing Tetris to fit their sleeping bags side by side in the hut.

The next morning, conditions were wonderful. It was brisk, sunny, with some good snow and marvellous views all over. People split up into many groups to tackle various adventures. A group went up towards Aragorn Glacier. Another group went to the summit of Peregrine. Another group went towards Frodo, and skied the Return of the King. Some skied the Northern Knob. Me, and seventeen others, followed Ross to the Col between Frodo and Gandalf, where we were welcomed by gorgeous views and chilly winds. The highlight of the ski back down was Shu Yu’s kilt billowing in the wind as she made her turns down the run. 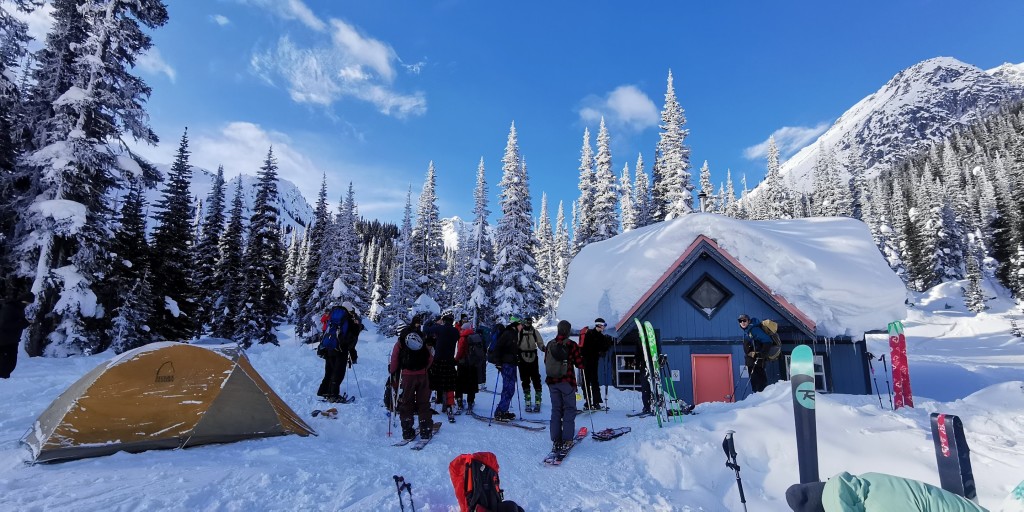 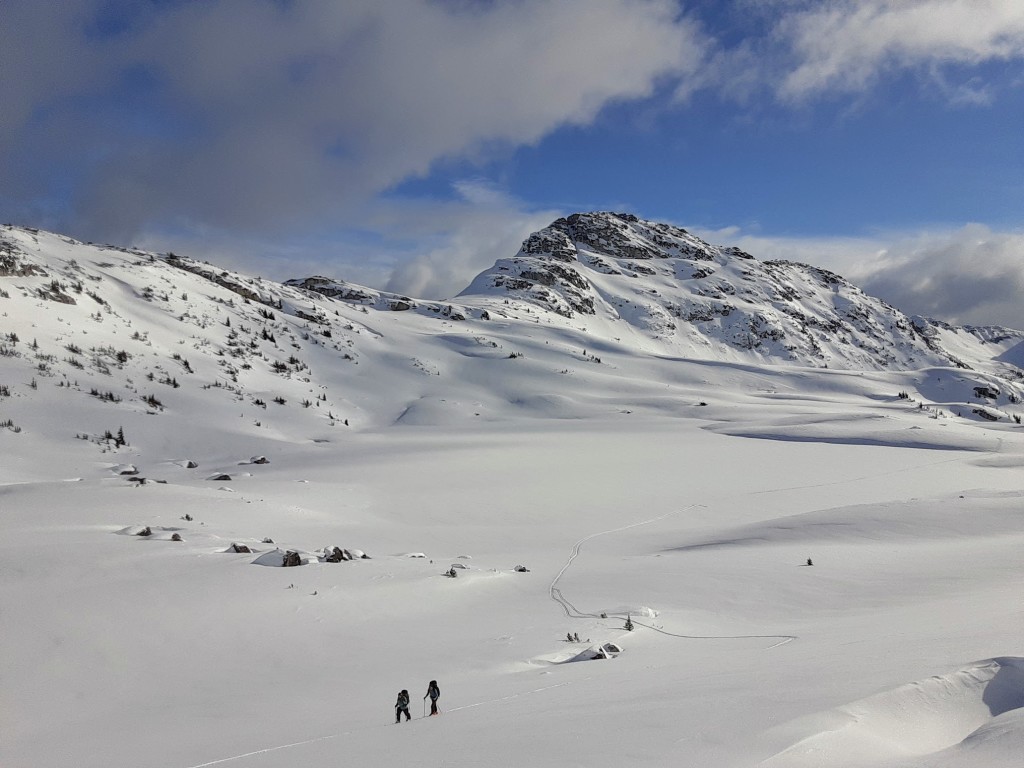 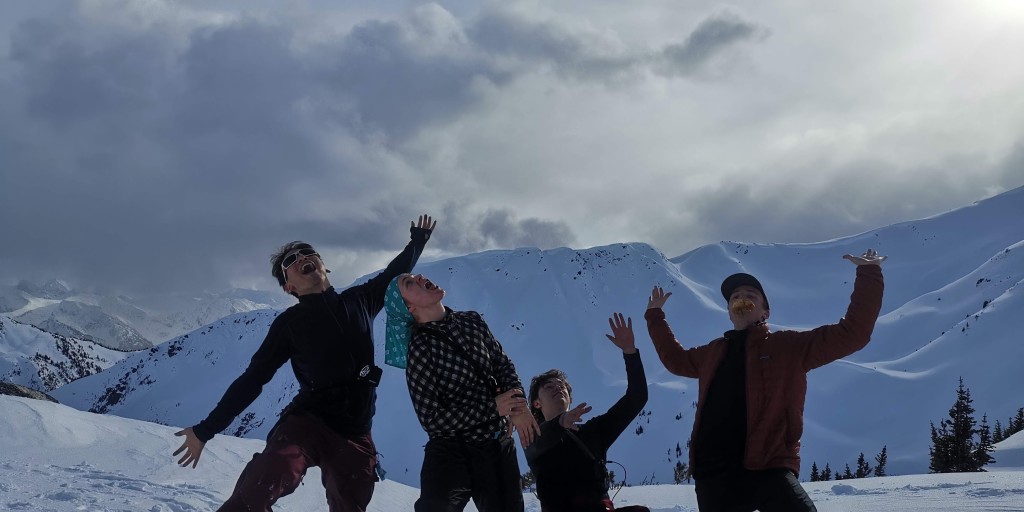 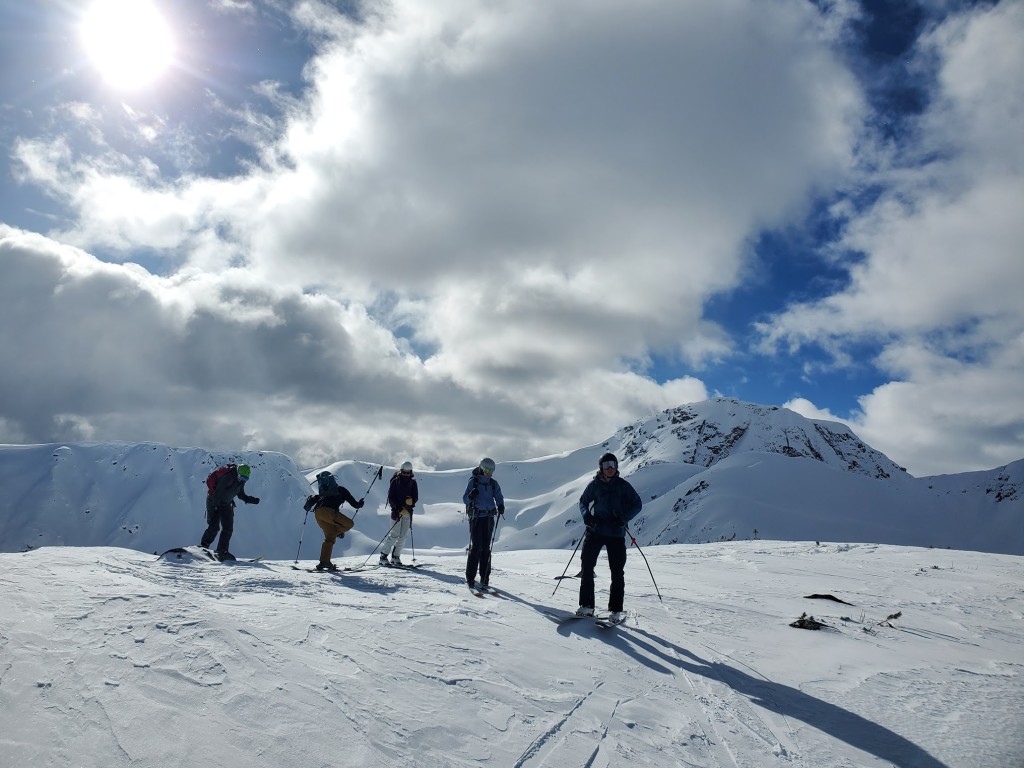 The entire day was spent with people coming back down to the hut and either cozy-ing up with a cup of tea or venturing back out in another direction to get some more turns in. Slowly, everyone came back, a happy chatter filled the hut and drinking began. Haggis was warmed up. Vegetarian Haggis (made by Hannah) was also warmed up. As the hustle and bustle was going on, I dragged Kai and Julia upstairs to help cook up an ode to the Laddies, something I’d nominated Kai to do, not knowing that it’s traditionally done by women.

Ross had the ode to Haggis in perfect Scottish gibberish. Then Julia, Kai and I read our ode to laddies, and then Mason gave an ode to the lassies, but unlike us, he actually made an ode instead of a roast (which was appreciated).

After hours of yelling at Ross to start the Ceilidh festivities, we ventured outside in our kilts, ski boots or hut booties, gathered around in a circle and tried to follow Ross as he tried his best to teach us how to twirl and jump and kick in proper Scottish fashion. We were a feastin’ a drinkin an a sing’n o’er the snow, ‘neath the sky, and surely, the music, the whisky, the haggis and the brilliant starry night made it much more memorable. 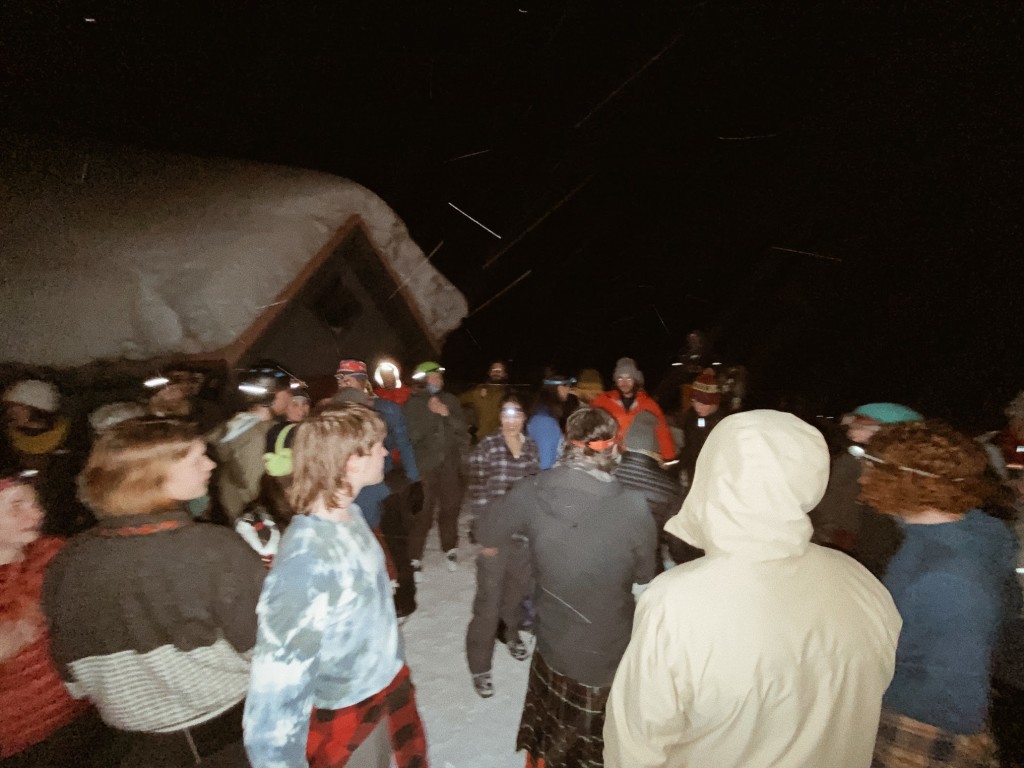 In the midst of all the festivities, some folks went up for a hopefully not fully drunk lap up Cabin Hill, and the rest of the crowd migrated back to the cozy warmth of the fireplace inside the hut, where we took out the VOC songbooks and sang the night away as Thomas and Mykal played the guitar. Finally, by midnight, when most whisky bottles and haggis pots were empty, and the night-riders were back, we dozed off and disappeared in our sleeping bags one by one.

The next morning, some parties ventured up again to get in as many turns in as possible before leaving, and others packed bags with a hint of the typical “last day of the trip blues”. Amidst the chaos of breakfast, packing, skiing and yelling if anyone has seen a blue sock or a missing beacon, we started leaving the hut and making our way back down the trail.The skin track was icy as ever, some skied, some survival skied, some splitboard skinned (turned out to be a bad idea), some snowshoed and some boot-packed. After what felt like an eternity in the middle of the trees and then in an open field under the blazing sun, we skied down a very icy logging road back to the cars. Waiting for car groups to be united, some people hung out at the trailhead, sitting on camp chairs, making soup, dancing, or cozy-ing up under blankets. Finally, with the help of all the sweepers and Ross, everyone got down safe and sound, and that brought us to the end of yet another wonderfully memorable Burns ‘n’ Turns. 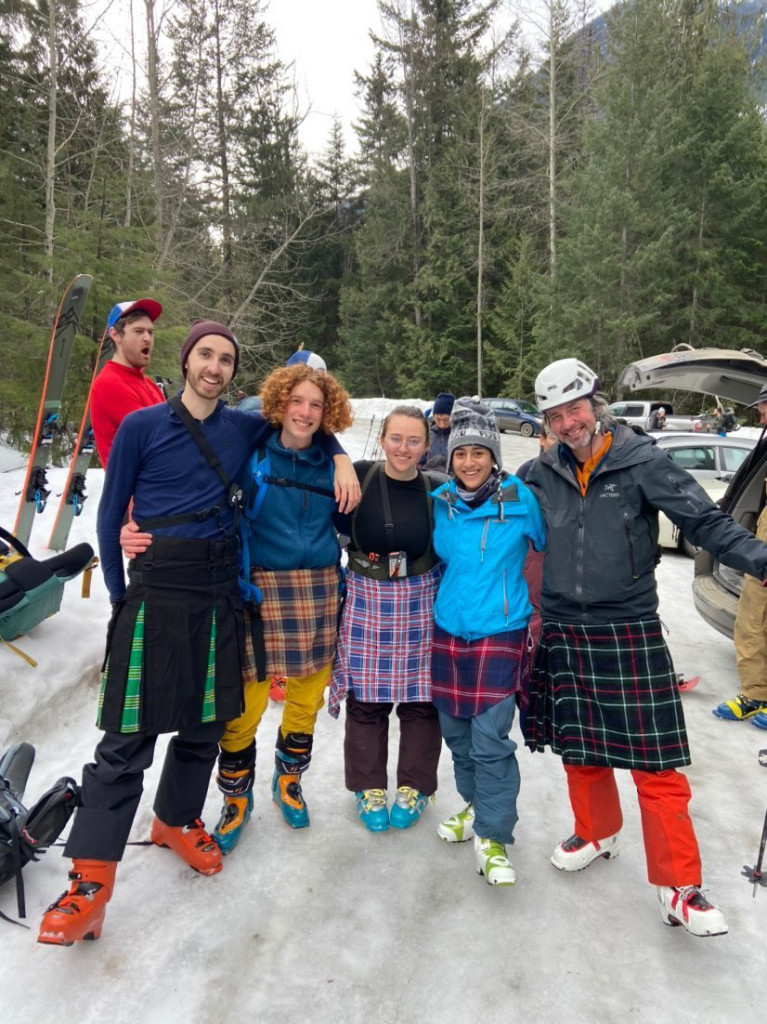 Ode to the Laddies

To all the laddies and daddies

And maddies who made it up the skin track

We applaud your bravery, but won’t give you too much praise for that

I’d rather a noseful of haggis

Or my tent-mate’s fragrant fart

We know you have the capacity to pee wherever you please

But think of us lassies who must bend our knees

I’d really rather not step in that yellow rut

Next time you pee please aim for the trees

We know we have issues, but let us find common ground

Tomorrow we must both ski the horrid icy track down

When we get to the cars, please turn on the heat,

We know your chest hair keeps you nice and toasty

But please think of how cold I am before you start to roast me!