My Daughter of Ice experience started late Friday night when Linda and Mason arrived in Vanthony to collect me. I was their last passenger and so together with Seton, Anelia, Anton, and Jeffery and approximately one fuckton of gear in tow we set out for Marble Canyon. We talked about prions (don’t google it). Seton napped, clearly husbanding his strength for herding a bunch of gumbies up ice in the morning. Vanthony made his elegant dancing progress up the Sea to Sky and then the Duffy.

We arrived around 11 at night at the campground and were overcome with joy to find the parking lot plowed- no shoveling a Vanthony sized hole in a snowbank for us! Although we would have happily shoveled for Vanthony, overcome already by love as we were for his charming disposition and goodhearted nature. Tents were pitched, sleeping bags fluffed. We all settled down and dreamt of ice.

The morning came cloudy and cold. Those of us who got up early were compensated for our extra time spent out of cozy sleeping bags with with a lovely sunrise. 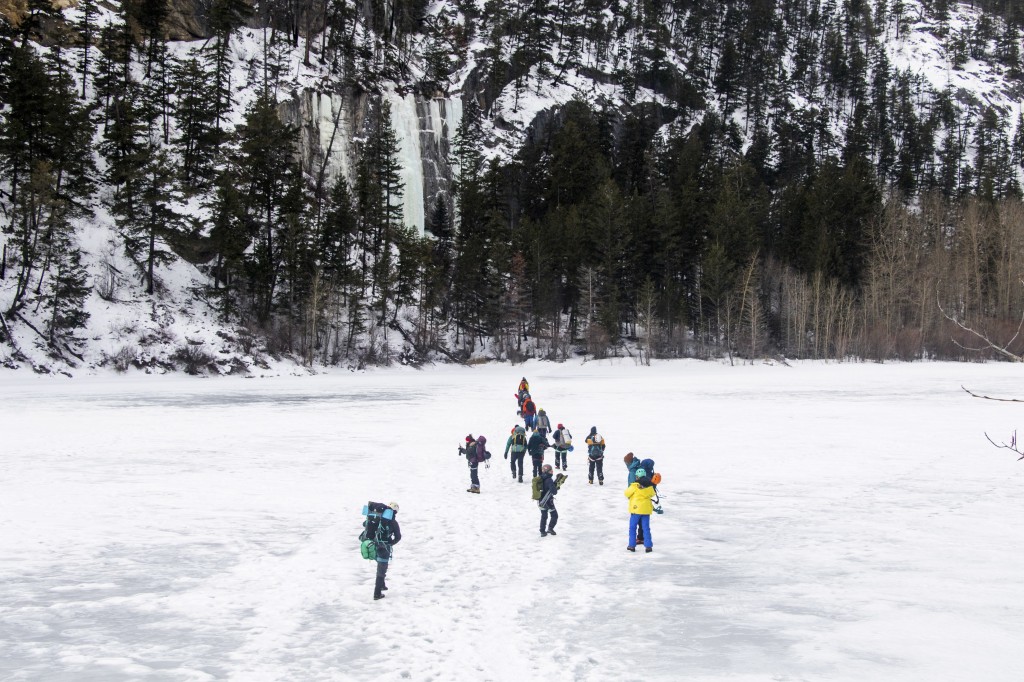 On the approach to the ice! PC: Isaac Borrego

The campground sits across a frozen lake from the ice crag and so as soon as we were up we could see the ice flows. We gathered, did a round of names, and started the trek across the lake. At which point I, and I would imagine others in our company, had the epiphany that 35 meters of ice is a lot of ice.

Who were we to attempt such an objective with just a beach bag full of ice tools from the clubroom and some pointy things strapped to our feet? What were we doing here? Does hubris know no bounds? As I pondered these questions, we arrived. 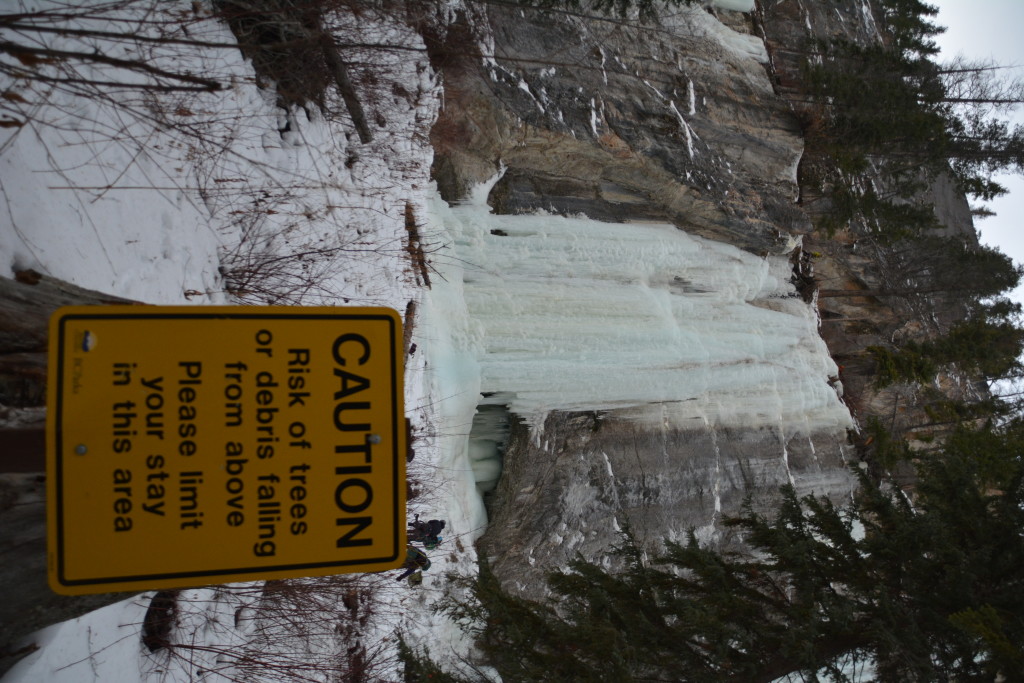 We did not in fact limit our stay in the area. PC Benoit Dupras

Ethan and Seton went to set up top ropes while Bella gave us a crash course on ice climbing. We were instructed in no uncertain terms what the consequences would be if we were to engage in pussyfooting or not swinging the tools like we fucking meant it. One should, as we learned, always swing like one screws and kick like one poos. Ethan and Seton rapped down, added a few pointers and we were off to the races. 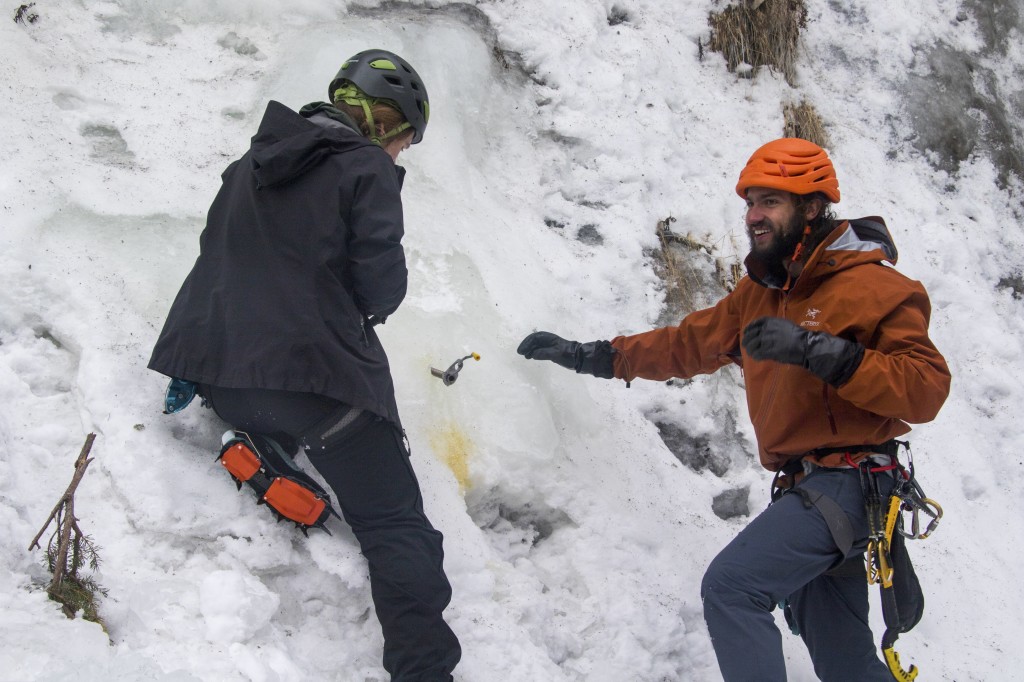 Ethan Somji providing instruction to Addie Truman and being an all around wonderful and chill person. PC: Benoit Dupras

We had three top ropes set up on the Deepening Wall which has multiple lines of WI5. WI5, it should be noted, is pretty fucking hard even if the ice was a bit picked out and fairly plastic. The grading system for ice only really goes up to WI7. Epic struggles were had by most. I poked approximately one million holes with ice tools and crampons in items including but not limited to my down jacket, my shell, my rain pants, my hut booties, my backpack, and perhaps most impressively my Nalgene. 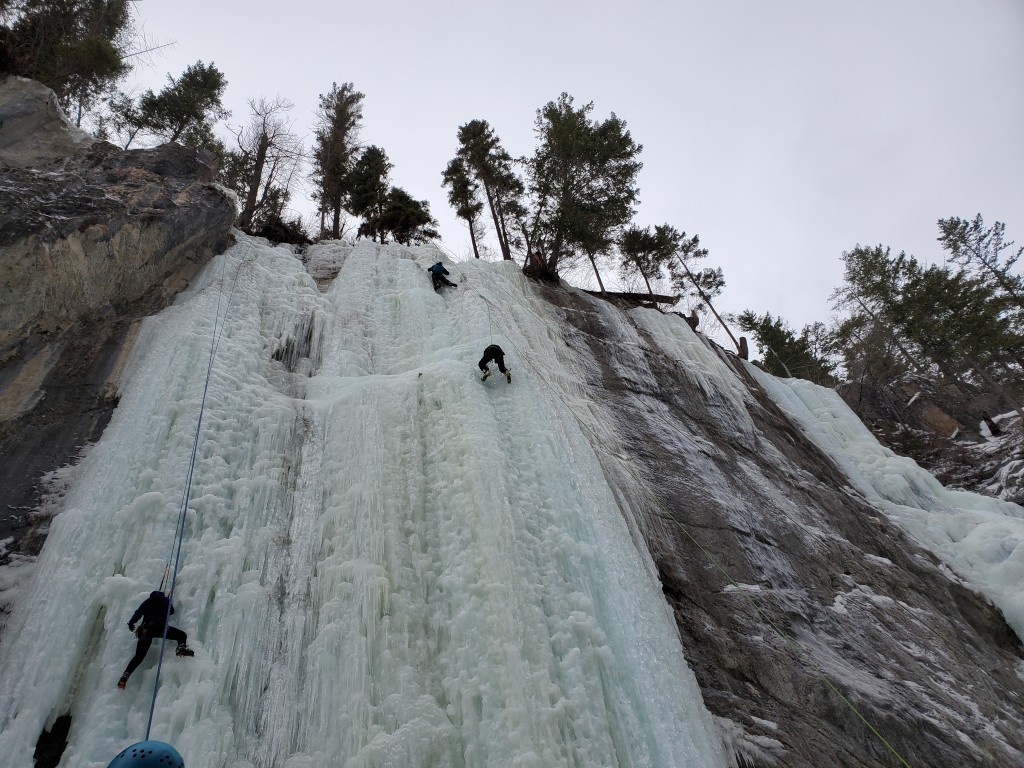 The deepening wall. Apparently not a LOTR reference

At a suitable distance back from the ice we set up chairs and generally had a good time, alternately heckling and encouraging our compatriots. Various philosophical discussions around topics such as whether drinking a beer at neat and cool counts as climbings took place between belays and climbing ice.

After a full day of swinging sharp things around we retired from the field of battle. Issac kindled a lovely fire which I did my best to kill by heaping on soggy pallet wood. People consumed beverages. Someone who I will not name in this trip report drank two liters of wine and immolated a hut bootie in what I was have been told was excellent VOC style. 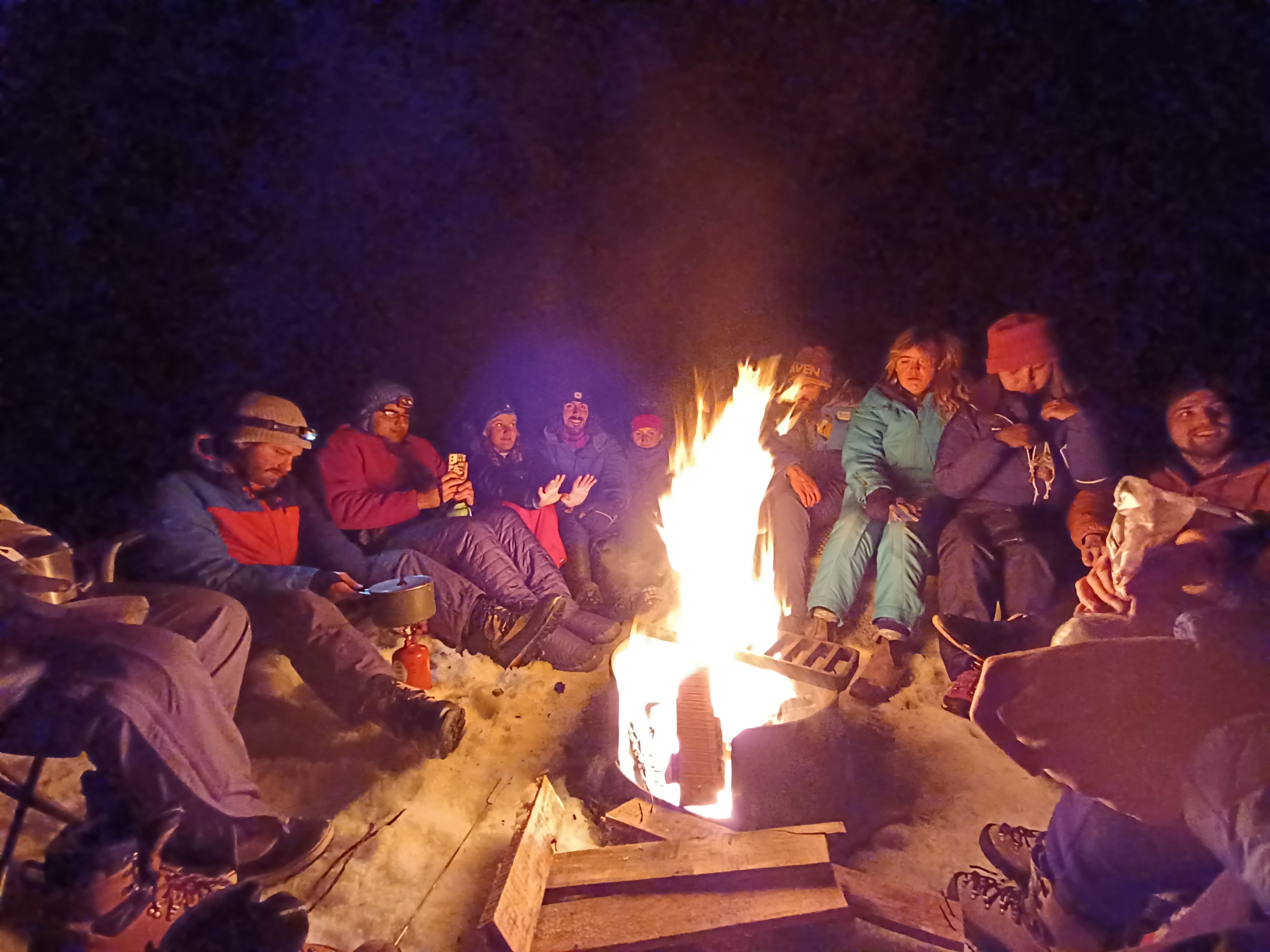 Heading to bed and waking up a bit earlier than most of the group, I headed over with Jeff to start putting up top ropes for day two. Creaking across the lake in our crampons, the ice loomed over us once more. The rest of the day blurred into a weird fuzz of exhaustion and stoke for me. On various climbs I (1) broke a crampon and accidentally launched it off my foot, (2) dropped an ice tool (pictured below), and (3) dropped both ice tools. A tremendous thank you to all those who belayed me on day two of climbing despite the fact that I was clearly a hazard to myself and others. I had the opportunity to climb Icy BC which along with having a name that brings me great joy was easier and a nice change from the deepening wall. MJ took down a hairy mix route after Ethan led that looked equal parts heinous and super fun. Others continued to do battle on the deepening wall. 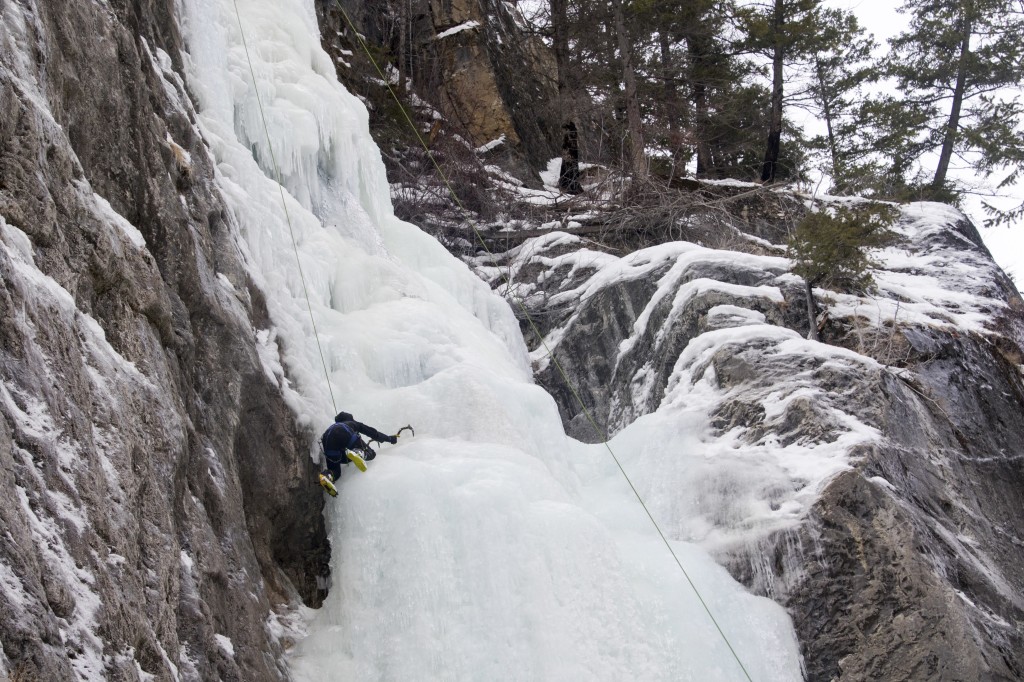 Me dancing the one crampon boogie on Icy BC PC: Benoit Dupras

As the day wore on people started heading out. Mason was kind enough to leave his club crampons with me so I could sneak more climbs in after my broken crampon debacle. The drive back to Vancouver was a little hairy but all cars eventually made up their minds that they would in fact get up and over the pass in the Duffy.

Some closing notes: DOI is a sweet trip, but if you can get your hands on a car with winter tires, a 70m rope (preferably dry) and stuff to set up a top rope everything else you need to ice climb can be rented from the club. Watch some youtube videos on technique, make sure you understand the hazards, and get out there! 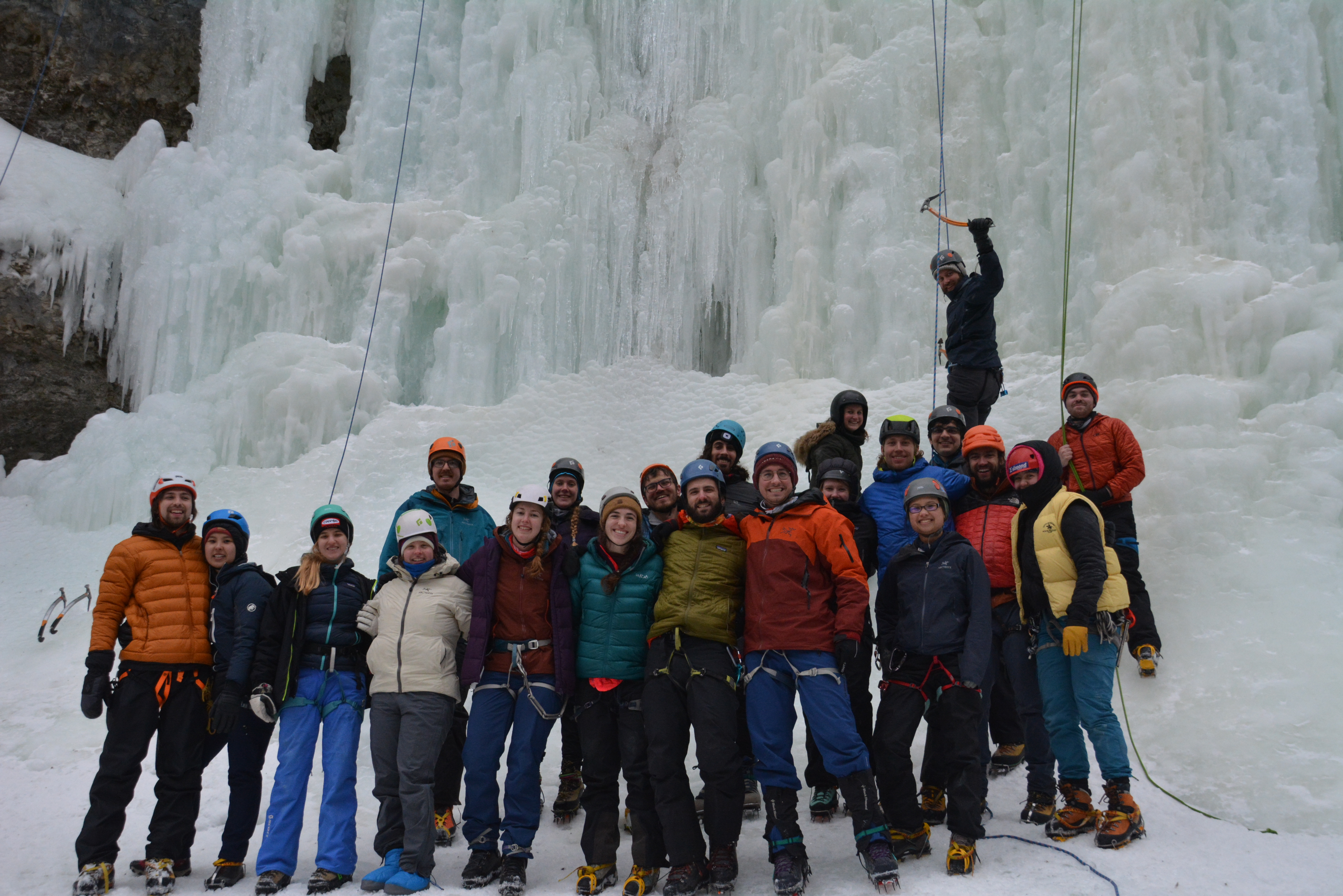 One Response to Daughter of Ice 2022