The third step to prepare for the Neve (neh-vay and not neev as I found out) was a 2-day trip to the Brew Hut. The Brew Hut always seemed to be quite scary to me, with many stories about 14-hour hikes during the Brew Debacle and I wasn’t really looking forward to experiencing that, but knew that if I wanted to be prepared for the Neve Traverse, I would have to get used to a decent amount of suffering.

The trip started on Saturday February 12 2022, pick ups happening around 5:30AM and meetups at the trailhead at around 8AM. After some initial faffing with teleskis not really fitting properly and Tom Curran and Cassandra Elphinstone changing bindings around on teleskis, we got started around 9AM. The first part of the route was quite gravelly and icy, so some people decided to bootpack while others decided to sacrifice their skins and begin their journey on skis. The FSR was also quite slippery and icy in the beginning but eventually began to turn to slush as the sun heated everything up.

We took a quick lunch break at the branch-off point where we went off the FSR and onto the trail.The trail was a bit steeper than the FSR and had a couple of waterbars that we had to remove our skis for. After some more skinning, we eventually hit a clearing that was uncomfortably hot, the sun was shining brightly overhead and the snow was reflecting the heat right back from below. I was surprised how hot it was in February but Haley Foladare said that it was unusual and felt more like March – April skiing, which made me realize that spring skiing would be a lot hotter than I imagined. 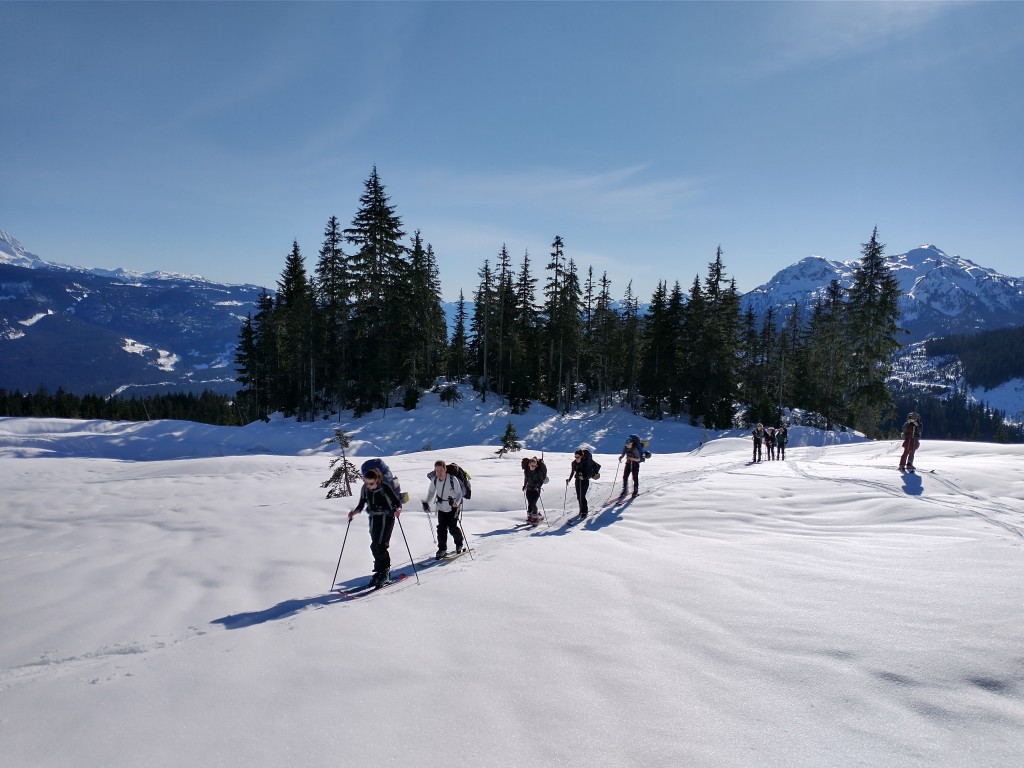 Trekking along in the February heat [Emily Adamczyk]

After what felt like an eternity, we had finally reached the foresty part of the trail, with shade that we were all grateful for. However, within the trees, the trail became a fair bit steeper and was also icy now too which led to a few more falls and people taking off their skis to walk some parts instead, myself included. Along the forest, there were some clearings that the skin track led to where the avalanche risk was higher, as the adjacent slopes were steeper and the sun had already baked them for a couple of hours, and some trails of loose snow falling off was seen. For those parts, we decided to go one by one and move quickly through the area to minimize our risk. 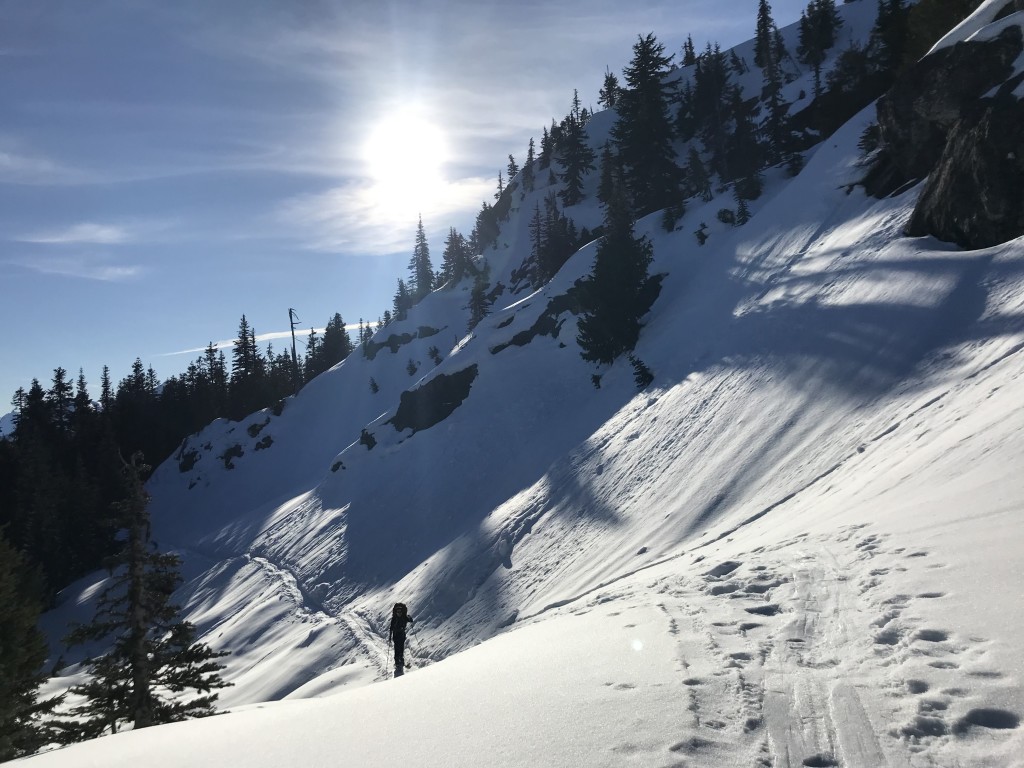 After we exited the forest, we entered another clearing that marked our last stretch of trail to make it to the hut. We continued skinning for a while, passing by Brew Lake, and the sun had begun to set, making the hike up a bit slower for me as I was turning around every few steps to admire the scenery (and also as an excuse to sneak in a break). 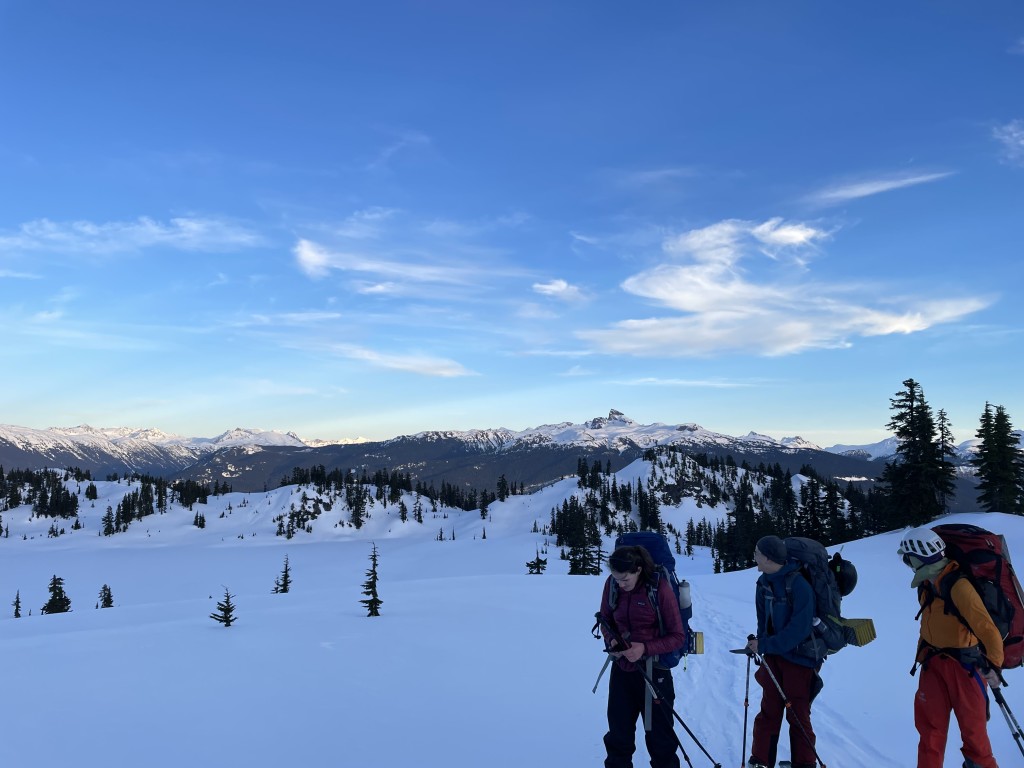 Finally, right before dark, and way shorter than the dreaded 14-hours, we made it to the hut! With a group of 20, there were a few people who had to camp outside, and I counted 6 tents beside the hut. The hut already had 3 non-VOCers and they had graciously melted snow for us to boil water for dinner, and we are forever thankful for their help. 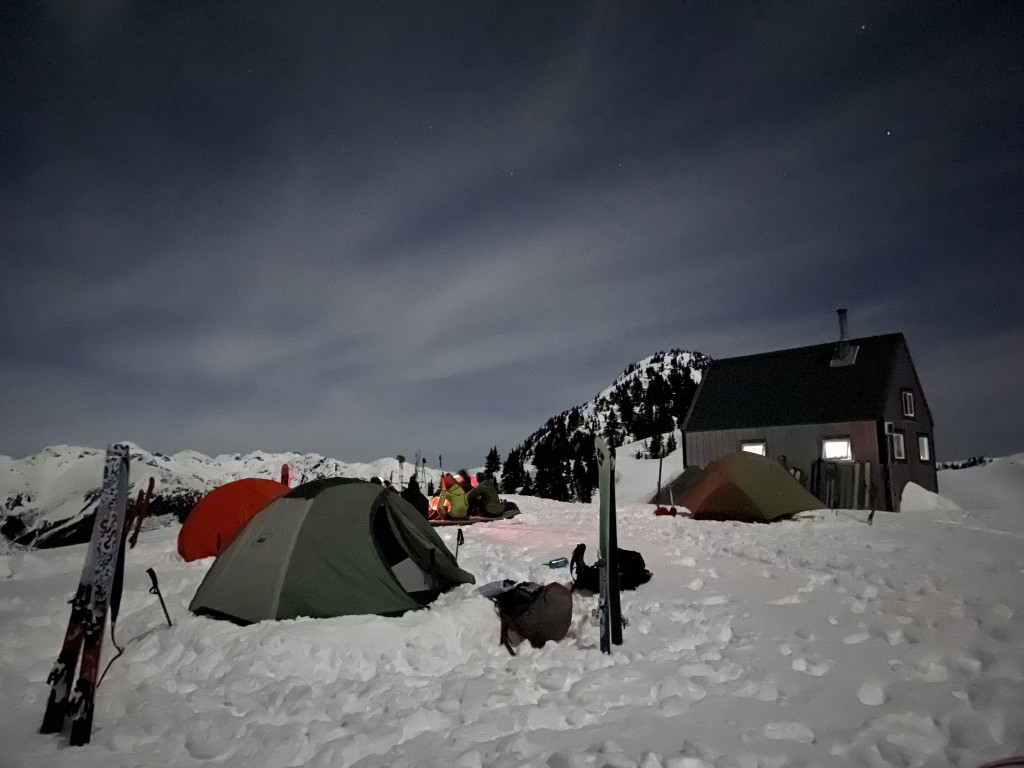 My tentmate Georgia Carswell and I were both quite tired so we decided to hit the hay (hit the snow?) shortly after dinner, around 9PM. As we readied ourselves for a good night’s rest, we were fortunate enough to have Ross Campbell and others’ soft singing near our tent to lull us to sleep.

Many people woke up for the sunrise, at around 7:30AM and after a few pictures, began eating breakfast and packing things up. 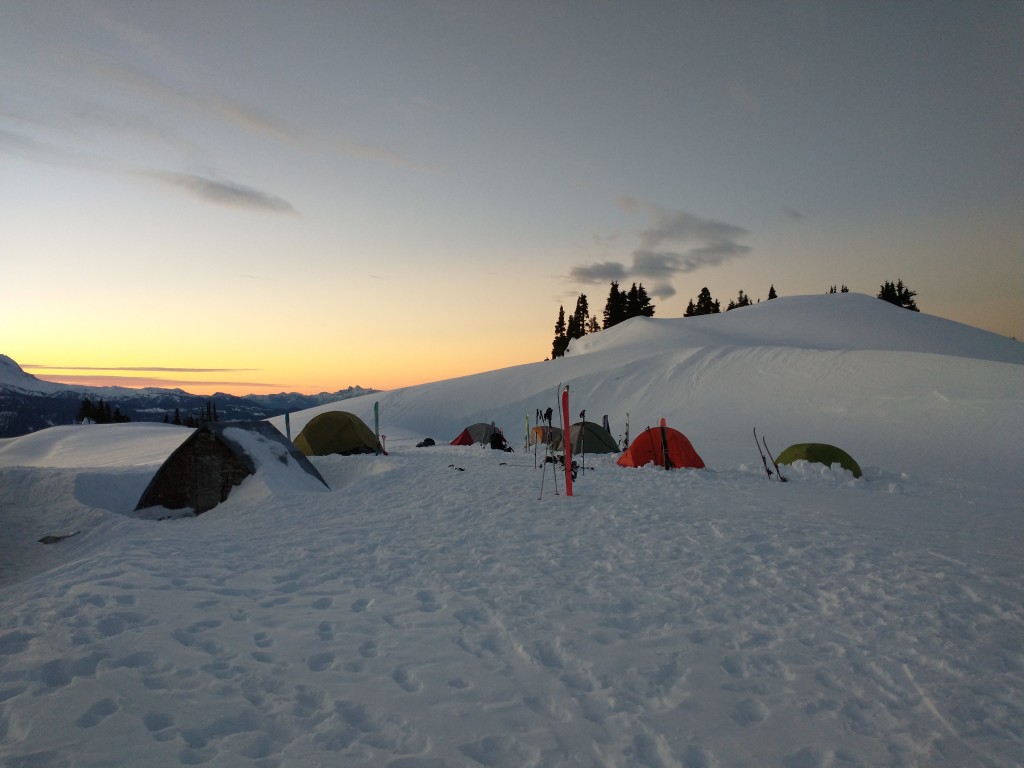 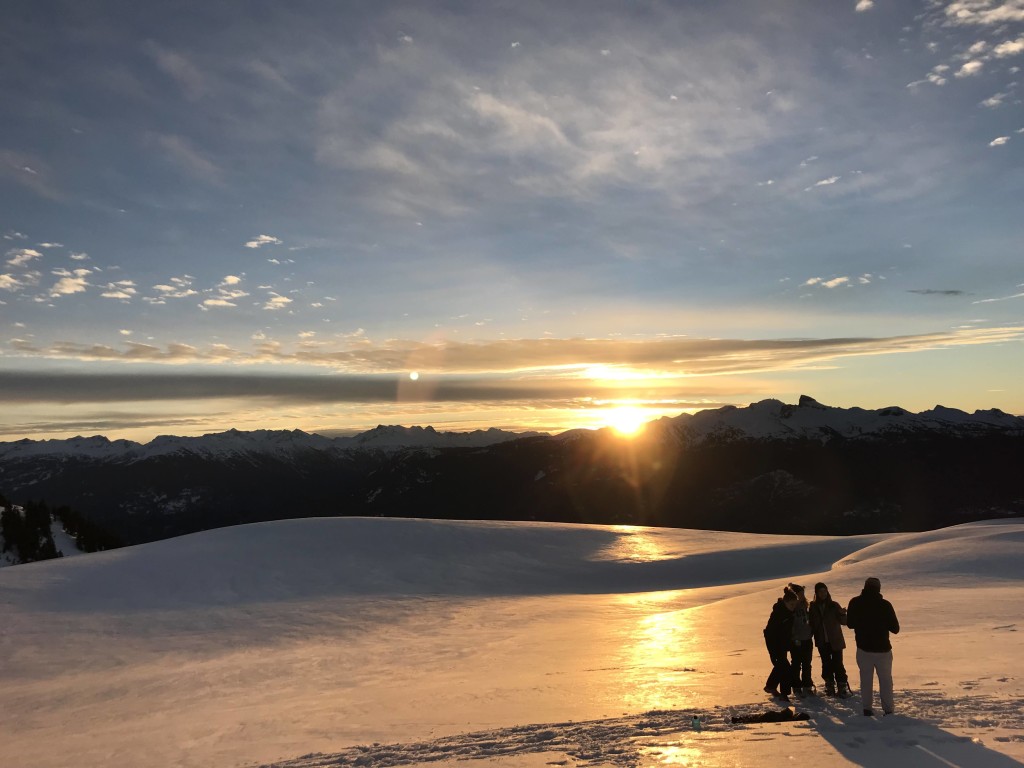 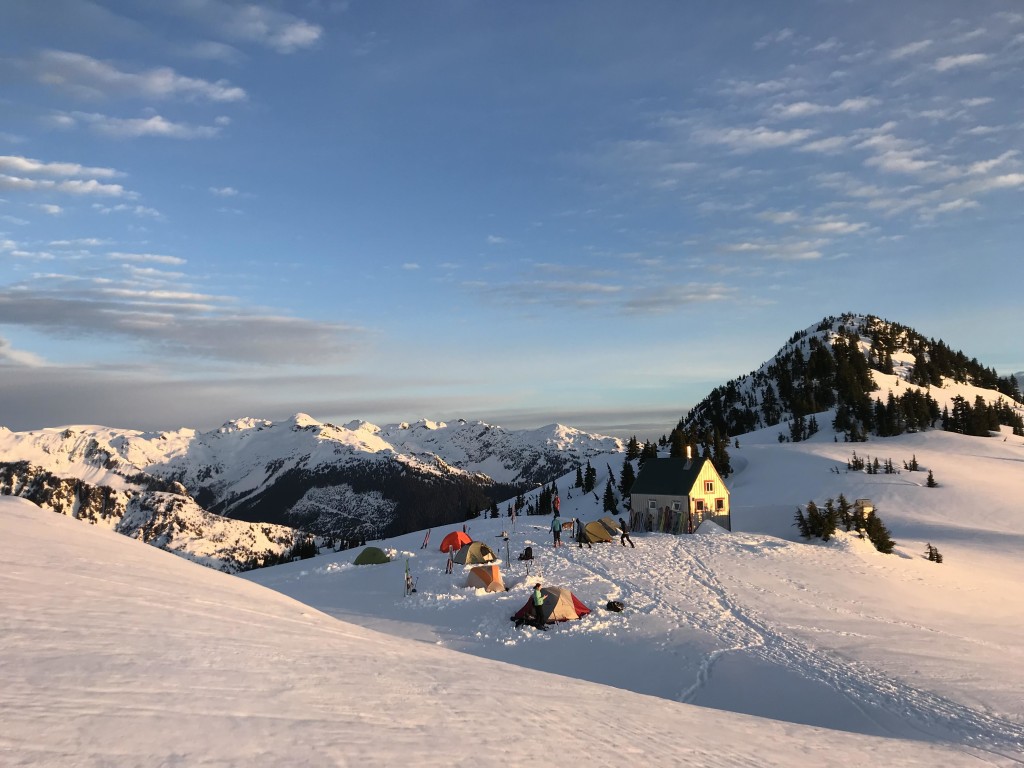 This weekend actually had particularly bad conditions for the backcountry, as the avalanche ratings were at Considerable and a Special Public Avalanche Warning was released by Avalanche Canada warning us of the dangers going into more risky terrain. (Link to archived bulletin: https://www.avalanche.ca/forecasts/archives/2022-02-12, under Sea to Sky) Avalanche conditions for this weekend

For educational purposes, and to demonstrate more visually why this weekend was particularly bad for skiing, Tom and some helpers dug a snow pit to showcase the layers in the snowpack. We found that after around 2-3 elbow taps, the top 10-15cm slid right off the top of the isolated column. Then, after a few taps from the shoulder a considerably large slab slid right off, at around 80cm from the top I think. The Special Public Avalanche Warning released for the weekend might have been because forecasters were worried the top slab release would propagate to the lower, more dangerous avalanche, as a step-down avalanche. Seeing how sketchy the conditions were for the neighbouring terrain, we decided to make our way back down towards the cars. The ski down was initially a bit crusty, then as we hit the forest it became steep and icy with a lot of side slipping to get down. We were              ♪ making out way downslope, sliding fast, please don’t crash and we’re homebound ♪. Some people had a bit of trouble getting down and so bootpacked some sections, leading to Ross and Cassandra attaching extra gear on to their packs.

The group did not lack aid as Ross, in his bright red slacks, found a clever hack to stack two packs on his back and was still able to follow the track downhill without a crack in his smile (oops, may have tried too hard and failed to make this sentence rhymey… ack!). Cassandra with an overnight pack on each shoulder! [Kevin Lam] Cassandra with an overnight pack in one hand, a pair of skis in the other! [Kevin Lam] Cassandra with a pair of skis on each side of her pack! [Kevin Lam]

Eventually we hit the start of the FSR and the real type 1 fun began, as the snow was surprisingly nice and decent skiing was done rather than the survival pizza-ing down on ice I was expecting to perform. Once we hit the bridge, we put on our skins and began our trek on some uphill parts of the FSR. After some more plodding along, we eventually reached the cars just before dark! Woohoo, we finally finished Step 3 to the Neve, one more step and then it’s off to the real thing! If Trip has Dog, Trip Report must have Dog Picture (her name is Wookie!) [Chrisel Brako]