Halloween On The West Knob

Halloween was quickly approaching, and many of us found ourselves searching for the perfect way to spend the spooky weekend. I know I myself was craving some frights other than those found in my upcoming chem midterm. Enter Kevin Lam, with a mysterious trip posted on the website. It had all the ingredients for a perfect Halloween endeavour. A journey through the dreary forests of the North Shore? Check. A gloomy atmospheric river scheduled to hit? Check. The possibility of two raging creek crossings? That’s pretty spooky in my book. Consider my timbers shivered.

I eagerly signed up the morning of the pre-trip meeting, knowing full well I probably wouldn’t get a car spot. My fears proved founded upon entering the club room and seeing the crowd gathered. It was then that Emily Wood suggested I bike the 23 km to the trailhead instead. Thus, a self-propelled expedition to the West Knob was born. When I half-jokingly echoed the idea at the meeting, there weren’t any takers, but Noah Wyse began organizing a transit commute for the other carless peasants. And so the stage was set for a Sunday of frights and terror! 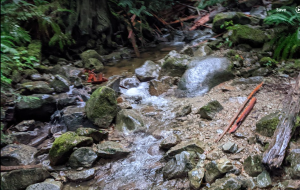 I woke up at 5:00am in order to make it to the trailhead at 9:00. In hindsight, this was way too early. My first impression of the ride was that it was dark and wet. My socks were damp by the time I reached Burrard Street bridge, and one particular puddle (or pond) in Stanley Park came up to the hub of my wheels. Any pretense of dry feet was erased as I inched my way through to the other side; a squelch accompanying each pedal. It was around 6:40 when I crossed to the North Shore, which posed a problem for me, as I would need to kill time somehow before meeting at the trailhead at 9:00. After biking up Marine Drive for a ways, turning up 31st, huffing and puffing as I ascended a couple of hills, my saviour presented itself as a Chevron off of Westmount Rd and Highway 1. I entered it, bought a Clif bar, and chatted with the attendant. She was a lovely lady, and talked about all sorts of topics, from her late coworker to lottery tickets, neighbours blowing up firecrackers, living in a brand new apartment, and finally chastizing me for my lack of reflective clothing.

“I have bike lights.” I protested weakly, to which she responded:

“So does this guy I see driving to work every day, and I never see him until I’m right on top of him.”

I had no real answer to this, other than to pray that I’m not biking while she’s on the roads.

These chats did their job at killing 30 minutes or so, and the pale dawn began to peak through the overcast skies. I said goodbye to my new friend and motherly figure, before mounting my steed and re-entering the wet. The ride down Westport road was beautiful. With stunning views of the ocean on one side, and cedar trees and ferns interrupted by cascading waterfalls on the other, I felt as if I was dreaming as I zoomed down the gentle slope. Before I knew it, I was at the trailhead, and it was 8:09am. I don’t know exactly how I spent the next hour. I remember locking my bike to a signpost, drinking half my tea, freezing my balls off, and trying to find shelter huddled under the granite wall separating the parking lot and highway.

It was then that Noah and the rest of the transit commuters piled in. We greeted each other, talked for a bit, and huddled under a tree to await the pampered car groups. When they finished trickling in, Kevin gave us the rundown on the plan for the day. We’d head to West Knob, enjoy some time there, and head back in time for us to get back home before 6:00pm. I volunteered to sweep the rear as we set off up the trail, grateful to finally be moving in the downpour. We passed under the highway, taking pictures of the water draining from it into the forest below, and entered the beautiful lush green cedar forests so endemic to the west coast. I got to walk with and get to know Richard, Adam, and Diana quite well. We talked a bit about our previous trips, the joys of backcountry huts, and our general stoke for another great set of trips coming up. 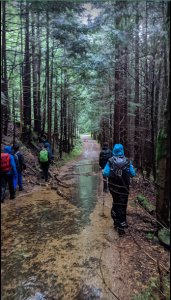 A dry and relaxing trail! Photo by: Sparsh Inanda 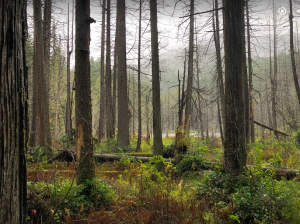 Eventually, we reached Whyte lake, which was shrouded in mist. It made for a beautiful, and spooky sight. We continued on for a while, reaching the park boundary and ascending parallel to Whyte creek. The raging torrent that Kevin foreboded was little more than a trickle. We were separated from the rest of the group at this point and ascended a steep bluff to finally regroup with them at the junction of West Knob and Eagleridge Bluffs. From there, it was only a short jaunt to West Knob. Theoretically at least. Some of those at the front tried to ascend a steep bluff with no discernable trail until Kevin ordered a turnaround and we found the main trail again. Man imagine being the idiot leading the whole group astray (that’s called foreshadowing). 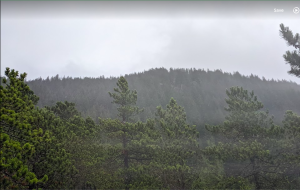 A view from the knob. Photo by: Sparsh Inanda

Finally, we came to the summit and spread out to break into a wet and cold lunch. Kevin, the absolute legend that he is, took out a pumpkin pie that he had carried in a drybag in his backpack the whole way up, and we dug into it to celebrate the season. Our trip back was largely uneventful, aside from the fact that I, being an idiot, took three wrong turns when leading the group. A few consultations with Gaia brought us safely back to Whyte lake, and onwards back to the trailhead. Exiting the haunted forests back to the dreary parking lot seemed like the perfect cap to a spooky weekend. 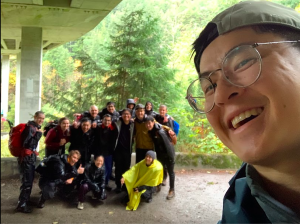 This entry was posted in Hike, Trip Reports and tagged Halloween, Rain or Shine, Spooky, type 2 fun. Bookmark the permalink.

One Response to Halloween On The West Knob