The day began bright (well, dark actually) and early, as all good hiking trips do, but I was so excited about getting out of Vancouver and on my first real Canadian hiking trip that I really didn’t care!

The plan was to drive the 4 or so hours to Meager Creak, meet up with Piotr’s crew who’d driven up the night before (and gotten to sleep in, the lucky sods), spend the day flagging a new trail to Harrison Hut – one that hopefully wouldn’t be wiped out by future landslides – and then walk back  and camp at the cars.

This all seemed to be going smoothly and I was collecting quite a few bruises from trying to look out the window on the bumpy logging road, when suddenly the road and river became one. Not to be daunted by a little water on the track, we pushed on. However, when we realised that the river was now above the road and spilling over, we decided that perhaps it was worth turning around and reassessing things with our feet on dry land. With the car parked on a high spot ready for a quick getaway (just in case), we passed out walkie-talkies, ready to check all the stations in the hopes of contacting the others, and were just taking our boots off ready to trek through the water on foot when Piotr’s car came charging through the water from further up the road. 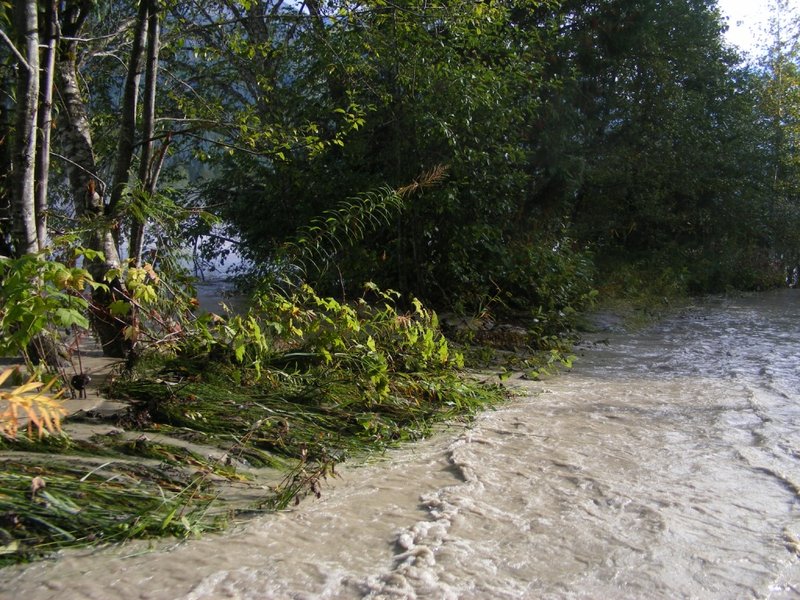 That’s meant to be the road on the right

As pleased as we were to see them (and not to have to walk through the water) and to learn that the river hadn’t risen overnight and there wasn’t a dam somewhere that was about to break and wash us all away, we still had to decide what we were going to do now. Once Line clarified for us that the three week old Veenstramobile was NOT going any further down the track, we decided we couldn’t let a piddly little river stand between us and our mission! So we crammed all 10 of us into Piotr’s vehicle and ploughed on up the road, leaving a wake that even a boat wouldn’t be ashamed of. However when we reached yet another section or river, which Christian and Piotr even got stuck in when they tried to walk it, we decided that perhaps this simply wasn’t the weekend for flagging the trail! 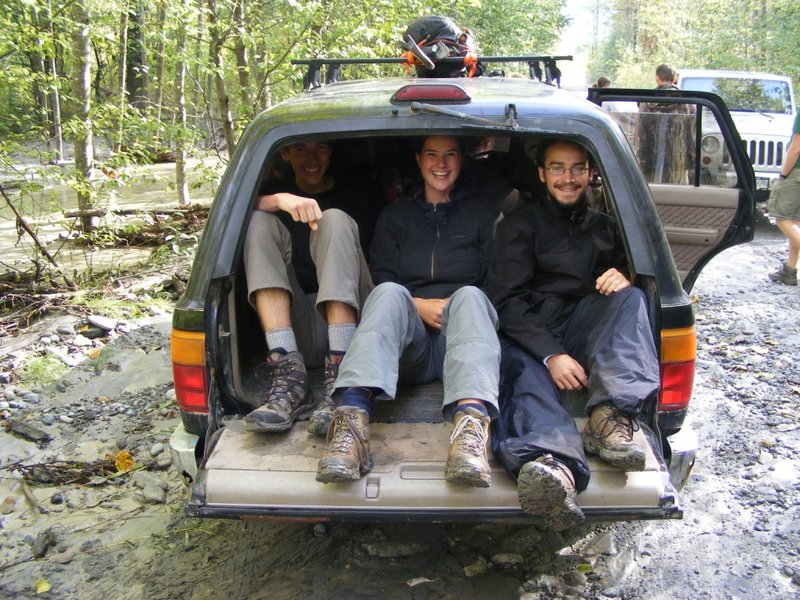 Jeff, me and Nathan cramming into Piotr’s car 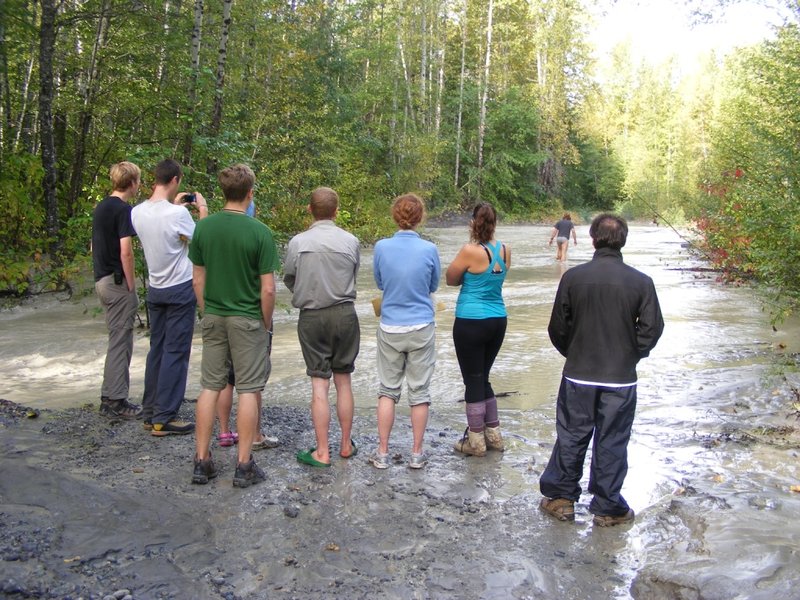 So we turned around and drove on to Phelix Hut, where we had to pack our gear (which we’d brought when thinking we were car camping) into daypacks. Finally, at the crack of 3pm, we began hiking!

Since this was a workhike after all, the guys figured they’d better prove their manliness by sawing large logs in half to get them off the trail. The girls, quite secure in their sexuality, decided that enjoying the sunshine by the lake was a much better  plan. When the menfolk finally arrived, Christian came striding in and the “so who’s up for some dinner?” greeting that I was expecting turned out to be a “so who’s up for climbing Cabin Hill? It’s the only peak I haven’t climbed here in summer and I reckon we can make it up before dark!” And so off we went. I was beginning to regret my decision to come along on the way up when trying to keep up with Christian’s and Jeff’s rapid pace, but the view from the top was worth at least 3 times the climb! 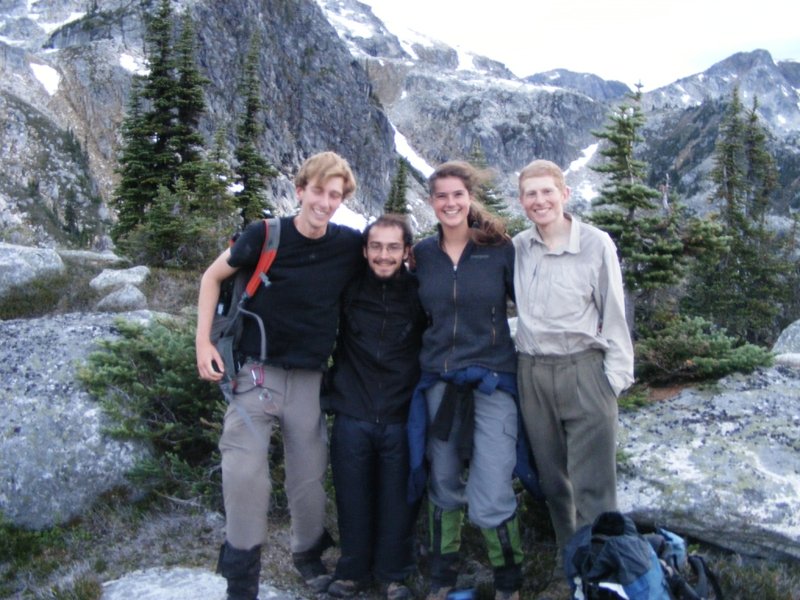 Jeff, Nathan, me and Christian on the top of Cabin Hill!

We arrived back in the dark and spent the evening in a pleasant mix of star gazing, very competitive games of Jungle Speed (involving at least a few bruises and Jessica getting dragged across the table) and singing along to Christian’s ukulele – I still have Puff the Magic Dragon stuck in my head!

We had semi-formed plans to climb Shadowfax (it was right in the middle of the Tolkien Range, the other mountains were called Aragorn, Peregrin, Frodo and Gandalf) the next morning, but looking at the weather decided perhaps we weren’t so keen after all. So instead we got our fill of excitement when the gas stove started spewing out a little more flame than usual…. Next time someone goes back to the hut would you mind taking a replacement fire extinguisher?

Once the fire was safely out we pruned trees, dug dirt and hauled rocks and dead trees in the rain for a few hours before lunch, to improve the trail around the edge of the lake. Which was actually a lot more fun than it sounds. And the track looks great now!

Finally, we finished our adventure in style at Shadytree, where we caught up with the Brew Crew and filled our bellies with the most enormous plate of nachos I have ever seen!