Posted on October 11, 2011 by Christian Veenstra

A bit of an old Trip Report (trip happened Easter 2011), but with a slideshow coming up I thought it might be good to copy it over.  Not to mention that the new public TRs look great and are, well, publicly accessible.

By Thursday it seemed pretty clear that the weather window wasn’t going to allow for the original plan – a fast and light 3 day McBride over Easter.  Tales of hardmen trapped or attempting to escape in bad weather from the McBride are not hard to come by – it seemed like perhaps it was just not meant to be. Eventually, though, I started to realize that it might be possible to do it in just 2, finishing in Sphinx Bay rather than falling asleep at the wheel and taking the bad-weather day to sort out the car-faff and drive home. Nick M. and Laura M. took a little, but not much, convincing. Productivity in the lab was seriously impacted for the rest of the day as my stoke reached unprecedented levels. I couldn’t remember the last time I felt this nervous and excited before a trip – it was like Line and I had a hot date lined up. Thursday night we drove up to Whistler, deposited Nick’s truck at Rubble Creek (although we would forget the keys in Whistler), and slept in Laura’s parent’s condo.

We were in the lift lines pretty early, and by 9:45am were among the throngs of slackcountry skiers heading out to enjoy the beautiful day. We kept pace with a group out doing the Spearhead in a day (careful to take breaks such that they were usually the ones breaking trail) and passed over the Quiver-Ripsaw col (camp from last weekend) at 1pm. Soon after we were splitting off from them and getting fresh tracks down the Naden glacier off to the head of the Cheakamus River. 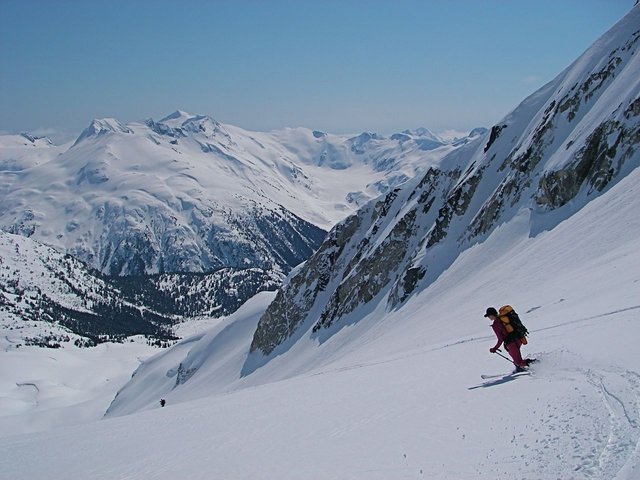 Getting down to the head of the valley took more effort than anticipated – next time I’d probably try and conserve elevation a little less, but we still made good time and (after fishing water out of the creek) were soon looking up at the 1100m slog up the McBride glacier up and over the shoulder of Sir Richard. Since it’s only an extra 160m or so of elevation gain, Nick and I felt it necessary to go all the way to the summit, reaching it just before sunset: 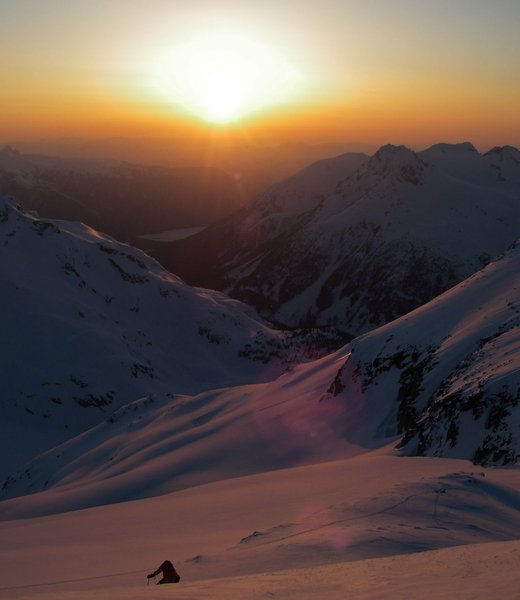 Camp that night was a little ways down towards the Gatekeeper on the shoulder of Sir Richard – we didn’t want to loose any elevation to go camp on the flats. My dinner that night pushed the “butter ratio” higher than I ever have before – just over 50%. The main course was 100g of potato flakes, 40g of sauce mix, and 150g of margarine. Caloric goodness. I was surprised to find that this ratio gave me no digestive troubles, and was quite tasty, and plan it to be the new standard for backcountry meals. Laura had borrowed Champagne’s new Megalight (basically a circus tent shaped tarp) which, aside from being very light and setting up with stuff we needed anyway (poles, skis, etc) has no floor which made for comfortable cooking inside. After a good night’s sleep we got up at dawn and were packed down, ready to ski, in under an hour. Castle Towers, marking our destination that evening, looked very far away – a distant ripple on the horizon: 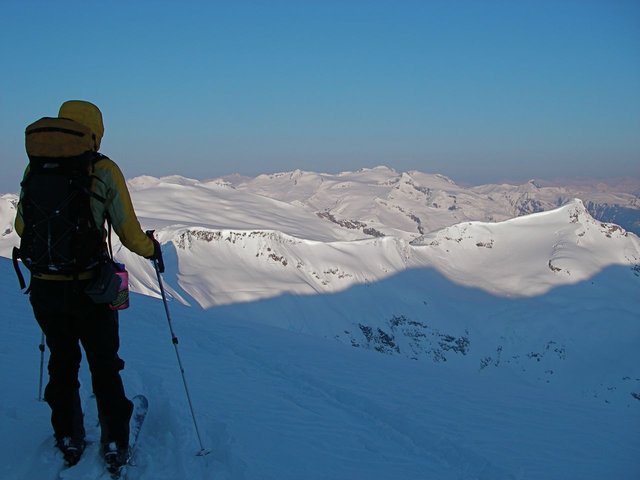 This brought us quickly down and around to pass under The Gatekeeper’s infamous steep south facing slopes while they were frozen solid. While they posed no avalanche risk it seemed that all the steep, refrozen avalanche debris certainly posed a risk of it’s own – especially since we’d deemed both ice axes and helmets too heavy. I think Laura was glad she’d brought her whippet: 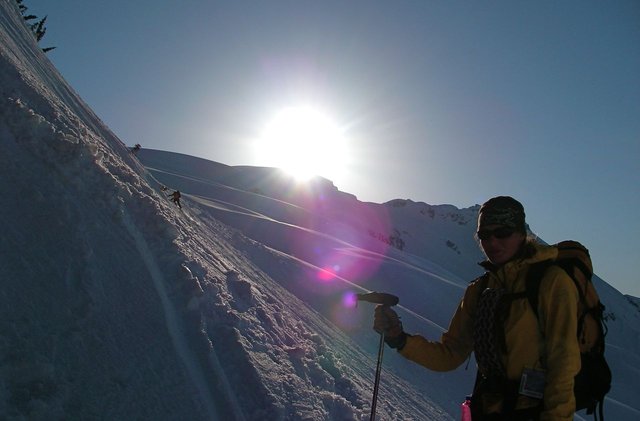 Eventually we all made it down to Wolverine Pass without serious incident, and quickly climbed up and out, gazing back towards Veeocee Mountain which would have to remain unclimbed by us. It pained me a little bit to pass by the mountain named after our club, but it was too big a detour to add to an already fairly long day. Soon we were hooking up and around the Snowbowl Glacier and climbing up over the shoulder of Forger:

After this “the route” generally goes around the south side of Fake Peak – but we couldn’t help notice the tracks going around the North side. It seemed that by doing so we could save having to cross south facing sun soaked slopes, as well as 120m of elevation gain. It did put us on a substantially steeper sidehill for substantially longer, but the snow thus far had shown itself to be bombproof, well settled, boot-top powder on North aspects. We decided to give it a go: 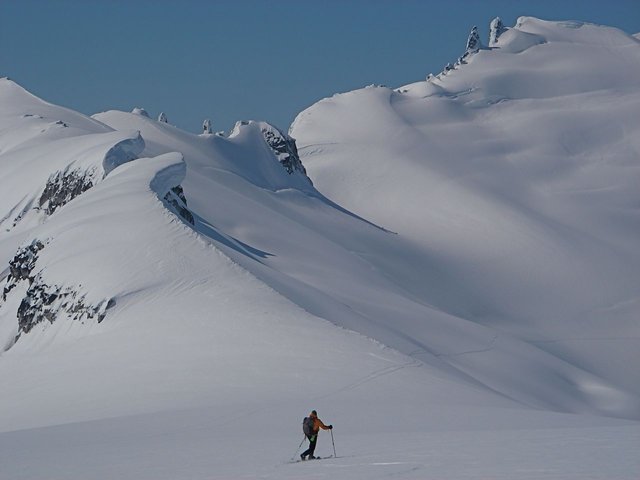 It worked out well, although the line we followed ended up in some fairly steep terrain right as the snow firmed up on the more western aspect. We bootpacked down and continued the elevation-gain-free traverse into Drop Pass. Looking back we could see that either higher or lower would have worked out fine for the traverse – something to keep in mind for next time. Soon we’d climbed up out of Drop Pass and were skiing along the Watchdog-Sinister ridge toward Hour Peak. 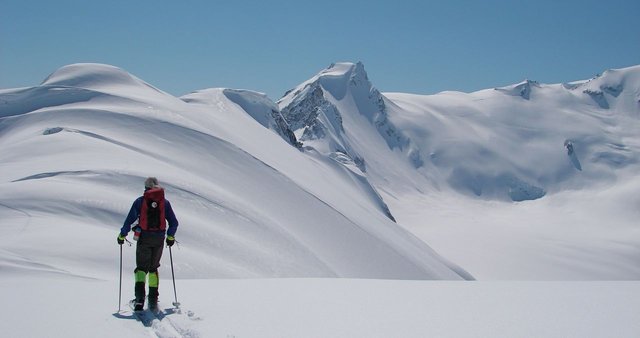 We opted to ski mostly over Sinister, rather than around under the massive scary cornice on it’s North aspect. This made for a little bit of enjoyable steep(ish) skiing to get back down and en route to Hour Peak. The snow was great corn, and although steep it was sheltered with a safe runout. Not to mention the location was fabulous. 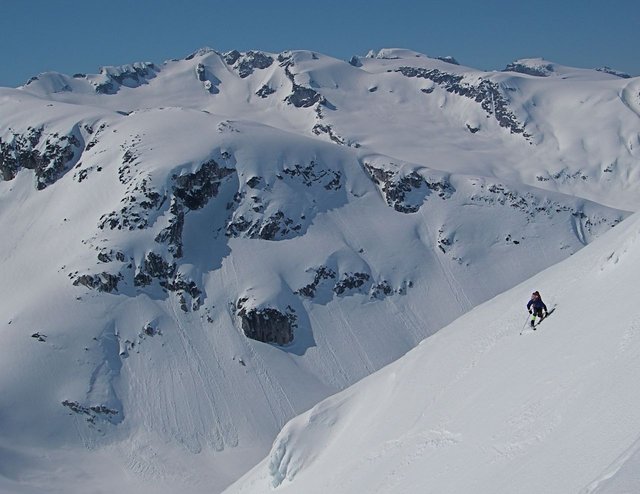 This brought us quickly to the mellow touring around Hour Peak and the impressive Minute Hand gendarme. This sub-peak remained unclimbed until the early 90s not because it is terribly difficult (5.10, apparently) but due to its situation in the middle of nowhere in a park where air-access is forbidden. Despite its proximity to our route we did not even think about climbing it, choosing instead to ski right on by: 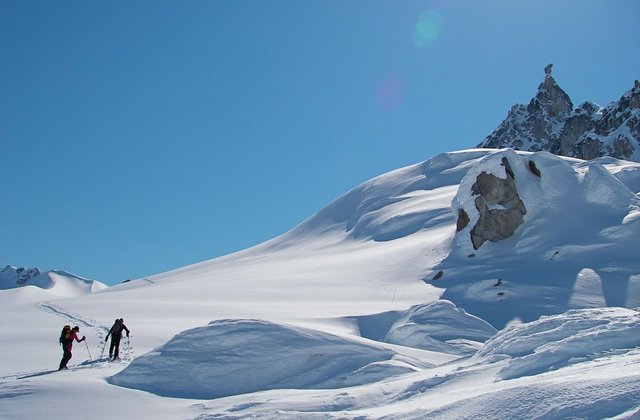 After skiing up and around Hour peak we contoured Isosceles toward the impressive Crosscut ridge and the gap with Luxor which marked the beginning of the home stretch:

Soon afterwards we dropped down sun-soaked slopes toward Gray pass. This marked the first occasion on the trip where I felt there was some non-zero chance for an avalanche incident – not bad considering the go-go-go nature of the trip and generally committing terrain. It didn’t feel too bad though, the runout was okay and it was mostly threat from above. Shortly after we’d all passed by a mid-size (2?) wet sluff came down off the rocks and passed over our tracks.

In Gray pass we had a few last bites of food, Laura downed an energy goo, and we got ready for the last climb up to the rim of the Sphinx Bay bowl. Looking back from above Gray Pass it was amazing to see Sir Richard, the location of our camp that morning, which now appeared just as tiny and distant as Castle Towers had earlier that day. (be sure and see also a labelled version of this photo).

Coming up over the edge I was stoked to see the familiar outline of The Bookworms appear just before sundown – we were home: After that it was time to get down to our friends waiting for us in Sphinx Bay, with just enough time to crank out a few last turns. I wish I could say the snow was excellent for that run down from the Bookworms, but most of it had turned to breakable crust. We did find a few sections of acceptable snow, though: That night it was great to meet up with friends in the Burton Hut, especially since they fed us, before skiing down the next morning to hitch to Whistler since the keys for the getaway car were at the wrong end of the traverse…

All in all it was a fantastic trip – thanks Nick and Laura for making it so!

Not quite the 18.5 hours those ski theory rando-racers managed to pull off (of course, they didn’t take breaks to sleep), but not too bad:

Total time, lifts to cars (including all the luxurious sleeping), ~48 hours.

2 Responses to Fast and Light McBride