After picking up (almost) all of the people who had signed up for a spot in my minivan, we set out across the bridge and onto the Sea-to-Sky highway with the faint pink tinge of dawn behind us. The morning was mostly clear and the Sound looked somewhat mystical in the soft morning light as the van full of sleepy yet eager VOC’ers drove towards Brandywine.

After a beautiful yet uneventful drive along the main highway, we turned onto the logging road up to the trailhead. Not having read the internet debate over the 2WD accessibility of this route, I was not expecting my van to have any problems. At first the road looked decent with some potholes and the occasional large rock scraping the bottom of my van (eek!), until we reached an upslope covered in loose gravel that sent my tires spinning every which way. At this point, my passengers exited the vehicle while I willed it up the hill and one of the other cars showed up behind us. We didn’t quite make it to the trail head in our vehicles due to an even larger and less packed-down looking hill, so we “warmed up” by walking up the rest of the road.

Nearly out of the woods

The trail started out with an hour or so of weaving back and forth up a hill through the forest. The trail had quite a bit of slippery coarse woody debris and mud puddles. My pants had mud splashed up to my knees even before the even muddier meadows! The trees thinned as we neared the top  and the trail leveled off. 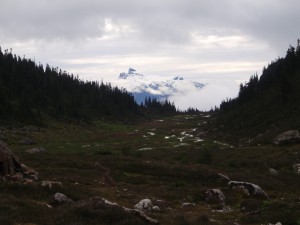 Looking back in the meadow

As we emerged into the meadow, the world opened up and showed part of the mountain ahead kneeling beneath the clouds. Looking behind us, the view was even more beautiful despite (or maybe even enhanced by the high clouds). There were even still some alpine flowers in bloom, dotting the meadow with occasional spots of purple and white.

I had to take a couple of extra breaks while walking along the meadow. One for a quick snack (already hungry at 10:30 am!) and one to treat my blistered heels from my new-ish hiking boots. I had done a few short hikes with them but I guess they weren’t quite as broken-in as I had thought. 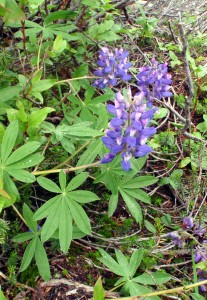 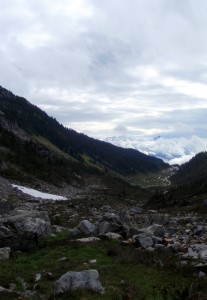 View from farther up the meadow Some more pictures from the meadow…

At the far end of the meadow, we stopped for a long lunch break. There were rocks and boulders lying scattered around a stream and there was still some snow on the other side. While some of the hikers sat to recoup and refuel, Spencer led the first group of students up the snowy slope to learn how to handle their ice axe and self-arrest in case of a fall. 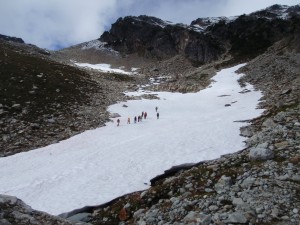 Going up the hill to learn how to self-arrest

At some point while Spencer called over the next group, we were left to practice. This quickly evolved into laughter and sled-less tobogganing (at least for a couple people).

Meanwhile, the folks remaining at the lunch spot had found some creative ways to amuse themselves, including bouldering and the throwing of rocks in an attempt to break a snow bridge over the creek. 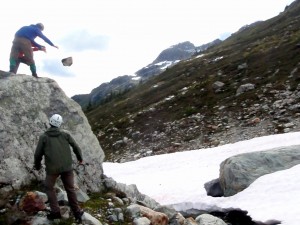 This rock was large, but missed… After our long break, we began to head up the snowy slope towards the mountain ridge. This was the part I found hardest, especially once we reached the clouds and there was less interesting stuff to look at. There were definitely some grumbles in the back of the line and by the time the whole group met up again just before departing to scramble along the ridge, four people were ready to head back down to the meadow. I must admit that I was tempted to join them, but knew I would regret it if I didn’t continue on. 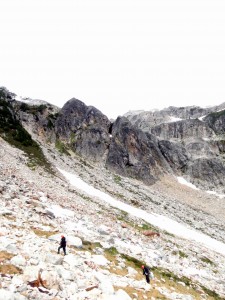 Heading up to the snow! 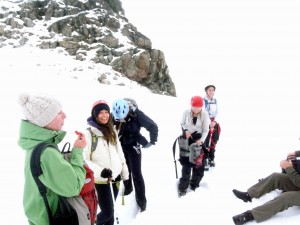 Waiting before going out on the ridge

Next we set off into the clouds to walk along the ridge towards the summit. There was almost no visibility and everything started to look like the same combination of rocks, snow and stunted trees. We went up and down over false peaks, stepping in each others’ footsteps and still sinking hip-deep in some places. One guy had brought a GPS, which was essential in such low visibility! The only way we knew the summit was still yet ahead was due to his altimeter. At one point, after descending a bit and seeing yet another snowy climb ahead, a few of us near the back were tired and decided to take a rest. Then out of the clouds ahead burst a peal of cheers – presumably they had reached the summit! With renewed energy we collected ourselves and almost ran up the last bit. I could not believe that we had reached the top after this long day! Despite the freezing wind stealing my dexterity, I eagerly signed the summit log. This was my first time reaching the summit of a mountain on my own two feet. I was absolutely elated! 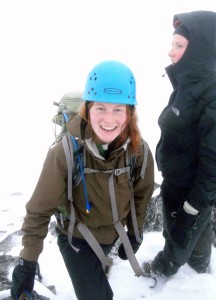 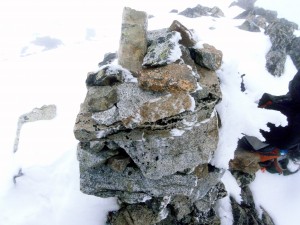 We then walked back through the fog then walked/ran down the smooth snowy slope. By the time we reached the meadow it had started to rain. I hadn’t realized on the way in that the meadow was so long! Everyone’s energy was definitely starting to drop by the time we reached the forest. Walking down the muddy and slippery forest trail was definitely accompanied by many small falls. About halfway through the woods, the 50% of us who had brought headlamps (despite it being on the gear list) lit up the path to prevent completely tumbling down the hill. By the time we got back to the road the sun had completely set and some of us took cat naps in the cars while waiting for the last few people to emerge from the woods.

On the way back we stopped at the Shady Tree pub for some food and beers (or coffee in the drivers’ cases) and were served by a rather forgetful waitress. Most people seemed tired yet happy and almost all of the passengers were out cold until we arrived in Vancouver around midnight. As for me, that was one of the most strenuous, tiring, and rewarding hikes I have ever done!