Nick stands on some rocks that someone named after our club

Posted on April 13, 2012 by Nicholas Gobin
Due east of Whistler, just beyond the Spearhead Range, lies a mountain that was named after our club. “VeeOcee Mountain” was named in 1964 and first climbed in 1966 by a party that included one R. Burton. It has been a poorly kept secret for a while now that Nick Matwyuk wanted to climb Mt. VeeOcee; last August he recruited myself and Phil, Marcin, and Derry to make an attempt that was foiled by our inability to ford the raging Cheakamus river. Nick called me up last week and figured that good weather combined with the Easter long weekend presented a good opportunity to give it another go. After a brief discussion we decided we’d go fast-and-light with just the two of us, and that we’d go the long way via the McBride glacier in order to ensure we didn’t run into any trouble with the Cheakamus river or the avalanche terrain on VeeOcee’s west flank. Since the first ascent party drove up to the top of the chairlifts on Whistler, we figured it wasn’t unreasonable to also take advantage of some mechanized assistance to get up to the top of the ski resort too. We drove up to Whistler on Thursday night and planned to catch the lifts up on Friday morning. As we drove across the Lions Gate Bridge we saw a full moon rising and hi-fived – conditions were perfect! 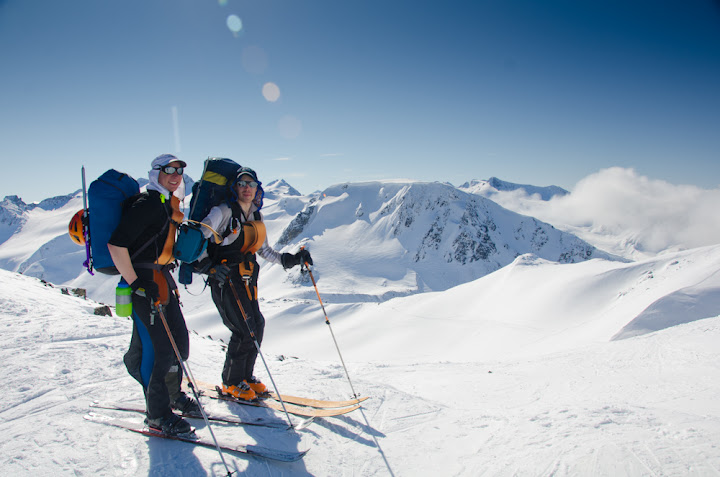 Nick^2 heading out the Spearhead

We hit Whistler Village early in the hopes of snagging a fresh tracks buffet breakfast on the top of Whistler before heading out. Unfortunately Whistler had reduced the number of fresh tracks seats without notice due to a ski-race on the mountain, so we each had two breakfasts in the village instead. I was somewhat disappointed that I didn’t get to witness Nick wreaking havoc on an all-you-can eat breakfast buffet, but we still caught one of the first gondolas up Blackcomb and set out from the top of the glacier at 9:30 with only a couple parties ahead of us. There were still leftover skintracks to follow, and by noon we had passed Tremor mountain as well as all the day-skiiers, the party doing spearhead-in-a-day, and a party that had camped on the Decker glacier the night before. We kept moving quickly, and skiied down the Naden glacier to a bench just above the Cheakamus. The day was now heating up and we were dropping in elevation, so the shade below treeline provided some welcome relief. We skiied a twisting path down through the trees to the Cheakamus that somehow left us on top of a cliff. Rather than skin back up and around we negotiated an interesting pillow line that took us to the valley and a nice opportunity to refill our water bottles at about 3:30pm. We started skinning up the valley towards the toe of the McBride glacier, but the snow was heavy and the temperature hot at the lower elevation. We’d originally planned to camp on the flats of the McBride glacier, but I was tiring quickly in the mushy snow. We talked it over and agreed that camping below the toe of the Glacier and going faster on a crust in the morning was a viable alternative. Our campsite was also close to the liquid water of the Cheakamus, so we had a relaxing dinner at 5pm and enjoyed the sunset before going to bed at around 8. 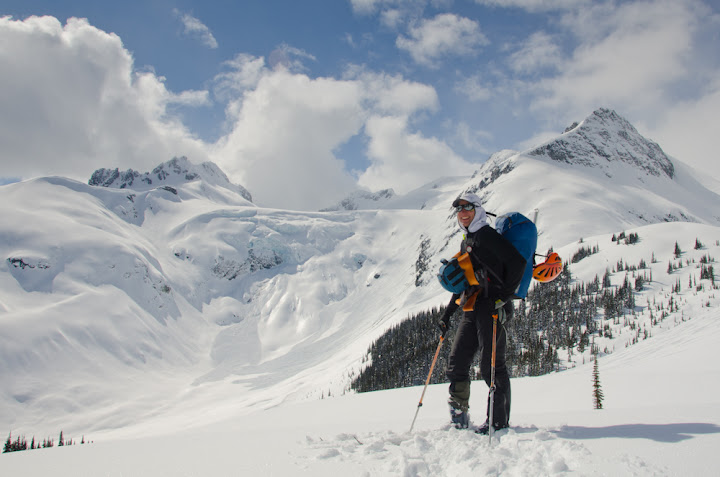 Nick M. at the bottom of the Naden with the Diavolo icefall in the background.

Climbing up to the East Ridge of Veeocee with Gatekeeper in the background.

The alarm went off at 4am and we were leaving camp at 5 the next morning. Cool morning temps made for pleasant skinning, but it also helped that Nick Matwyuk broke trail 99.9% of the way up the very long McBride Glacier. It was fully daylight and another bluebird day when we reached the McBride-Ubyssey col, but a steady cool wind kept the tempuratures reasonable enough that we kept our shells on. The views from below Sir Richard were stunning, and a stark contrast from the Spearhead. The only tracks to be seen were our own, and the only sign of other humans were the skintracks and ski tracks that we could still see back on the Spearhead. Endless and completely untouched mountains streched in every other direction, and we had great views of Baker, Judge Howay, Glacier Peak, Garibaldi/Atwell, and Tantalus. We saved the summit of Sir Richard for the way back and set off down the ridge towards VeeOcee. We had thought it might be possible to go up and over the Gatekeeper, but a short bootpack to the summit revealed that this would require skiing very steep 60 degree slopes off the West side.
We skiied back down the East ridge of the Gatekeeper and contoured around the south side before climbing up a snow-slope to regain the ridge to VeeOcee. It was now ~11am and this south-facing slope was cooking. This was somewhat uncomfortable given that we would have to cross it on the way back, and we could see many natural wet slides that had occured on similar slopes over the previous few days. After gaining the ridge it was a straightforward skin to summit of VeeOcee where we unfurled a club flag and announced to everyone around (which was no-one) that we had proudly reached Mt. VeeOcee!! 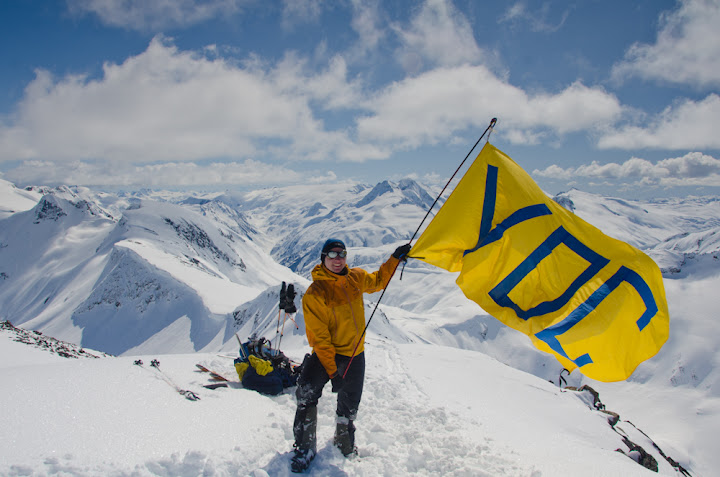 After some pictures and snacks we headed back towards the Gatekeeper. The sun was still sizzling so I pushed a bunch of snow down-slope with my skis before starting down. Nothing moved very far and we hadn’t seen any natural activity all day so we went ahead and leapfrogged between safe-zones to get down with only starting some very small wet slide movement. As we were skinning back towards Sir Richard we ran into the only people we would see all day – a cool couple from Squamish that were doing the McBride traverse in 4 days. They’d camped behind us on the Cheakamus the night before and gotten a later start in the morning. They thanked us for the skin track up the McBride but did note that we seemed to “like going straight uphill”. We wished them good luck and continued on up to the bag the summit of Sir Richard just before 6pm. A true joy of spring touring is lounging in warm sunshine at such a late hour of the day, knowing that you still have plenty of light left and 1200m of gorgeous snow to ski back to camp. The ski down the McBride was a blast, with casual gently rolling terrain and snow that transitioned from great powder at the top to creamy butter at the bottom. We got back into camp at 7pm after 13 hours of travel and with 2400m of elevation gain under our belts for the day. We enjoyed a quick dinner another great sunset before passing out before 9 again. 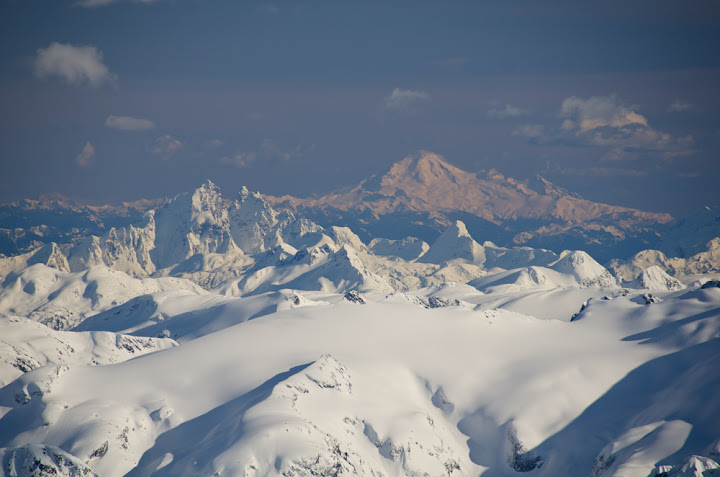 Judge Howay and Baker as seen from Mt. Sir Richard

Sunday dawned clear and we were off by 5:30 again to take advantage of cold and fast snow. This also allowed us to take a more direct route back up towards the Spearhead by crossing numerous south-facing avy runouts while they were still frozen. The morning skin down the Cheakamus valley was especially pleasant with cool temps and a full moon that slowly sank to the centre of the valley as dawn spread across the sky. We popped up to the flats below the Naden and into the warm sunshine in time for a second breakfast before heading up Detour ridge. Again Nick M. pulled the whole way and broke trail for another 1000m of uphill vert. I tried to catch up, but I kept getting distracted every few steps by the gorgeous views that surrounded us. We topped out on Detour Peak before noon and had lunch there. We were definitely back in the Spearhead! After seeing only 2 other people in the entire McBride range I counted 24 ski-tourers skinning up Benvolio at one time, with more arriving from Iago as each tourer at the front dissappeared from view. We caught a couple gorgeous turns off Detour peak before cutting a lone skin track across the Diavolo Glacier to join the party. We took a quick and direct line to Overlord from the Benvolio-Fitzimmons col under Benvolio’s teetering cornices, and skiied around Overlord and Refuse Pinnacle without incident. We briefly considered climbing up to ski the Banana chute off Fissile on the way home, but our legs were fairly thrashed at this point and increasing cloud cover was making very flat light so we left it for another time and bumped over Oboe and Flute to re-enter the restort area at 3:30pm. There were still loads of alpine skiiers making their way down, but we raced past them and headed straigt for the bottom and Splitz grill. After sating our hunger we had a relaxing daylight drive back to Vancouver and a third early bedtime to close out the weekend. 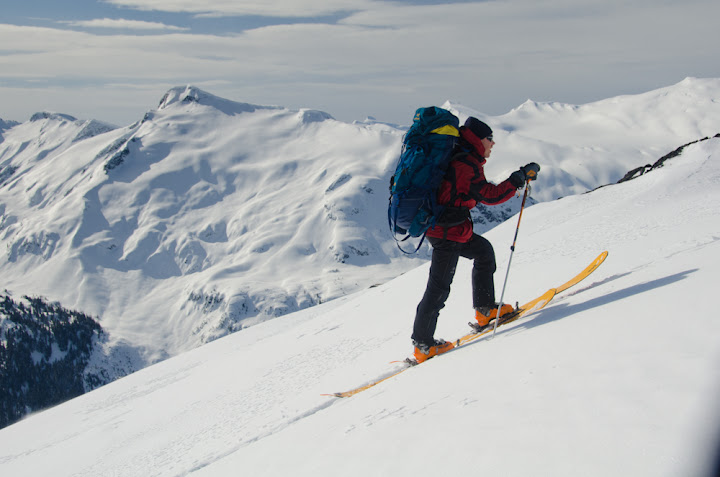 Skinning up Detour Ridge with Mt. Veeocee in the background. 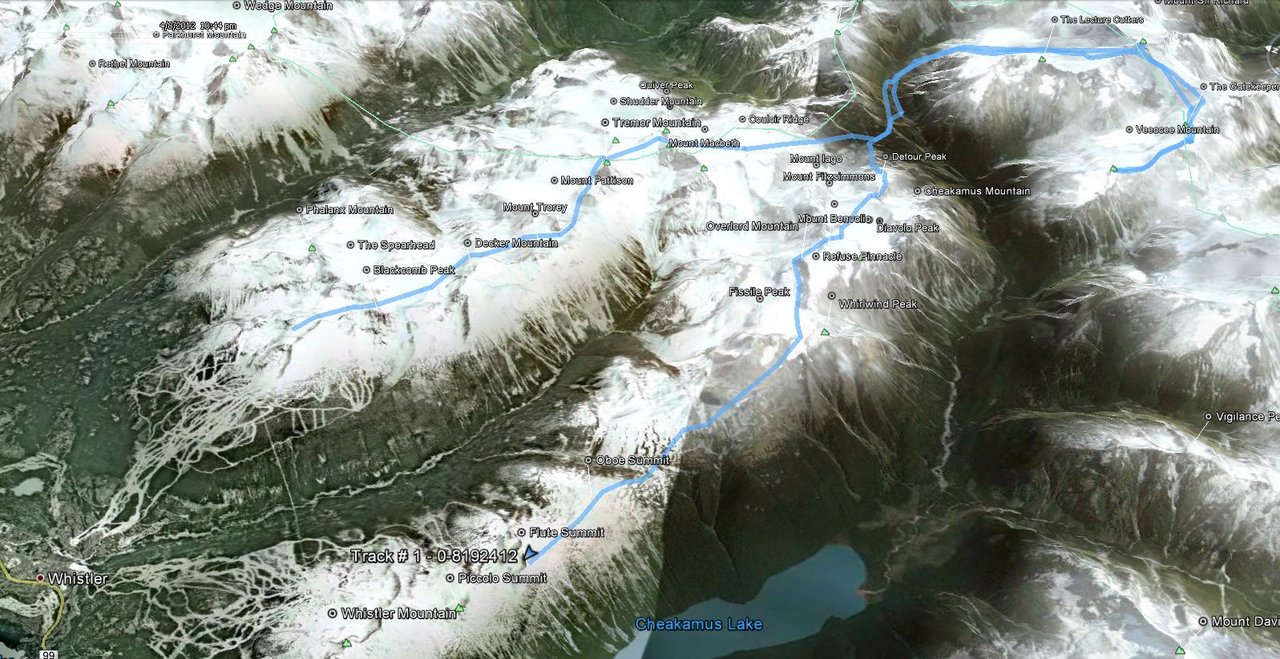