Challenges and Triumphs Found at Harrison Hut Workhike (May 18-20)

The Harrison Hut has been an extremely useful asset in outdoor activities for many years. A recent rockslide at Mount Meager rendered the route to the hut destroyed and the hut itself inaccessible by self-propelled means. A group of researchers was organized and assembled to continue existing progress on the re-establishment of the trail to the Harrison Hut. Difficulties were encountered in establishing contact with the Harrison Hut within the first day, and the treatment group assigned to that role modified their objectives by turning around and abandoning the hut. During the second day, significant work was accomplished in improving the trail and establishing further flagging and routes towards the hut. A relatively uneventful final day concluded the study, culminating in a record-setting loadup into the Veenstramobile along with getting kicked out of a bar in squamish.

Background and Introduction
The Varsity Outdoors Club (VOC) Harrison Hut located on the northern side of the Pemberton Icefield has been a popular location for excellent backcountry skiing, mountaineering, and hiking thoroughout the years in which it has been active. In August of 2010, one of the largest landslides in BC history occurred in the area, causing over 4.85*10^7 cubic meters of rock to fall into the valley below, resulting in an M=2.6 earthquake measured by seismographs located in areas that the author was uninterested in researching.1In addition to detaching a significant portion of Mount Meager, the slide managed to destroy a number of logging routes and bridges vital to the established route to the Harrison hut. In recent years, the hut has been nearly inaccessible by self-propelled means, resulting in a risk of the hut falling into disuse and abandonment, which can lead to issues such as alcoholism and drug addictions further in the future.2 It was decided that a new route to the hut would need to be built. Previous studies have determined that a rough route part of the way to the hut had been built. It was determined that further studies would need to be conducted to determine a route to the hut proper as well as refining the route that had already been made.

Preparation for the study mainly consisted of organizing groups of VOC members to conduct ‘studies’ on different sections of the trail in order to improve the condition of the route. Eventually three treatment groups were prepared. An upper trail group, consisting of Julien Renard, Todd Van Der Starr, and Luka Culibrk was formed. A group responsible for flagging a route in and around hot springs creek consisted of Christian Veenstra and Klara Steklova. Finally, a group responsible for brushing the established trail along with marking it consisted of Boris Dalstein, Magda Price, Yuri Chenyakiri, Ross Campbell, Jim Richardson, Amir Maleki, and Gabe Frame. The rides and other necessary portions of trip planning were done in the days leading up to the trip, in a process formally known as “faffing”. A number of trail-clearing equipment was taken, including some amount of saws and trail clipping things whose name escapes the author. 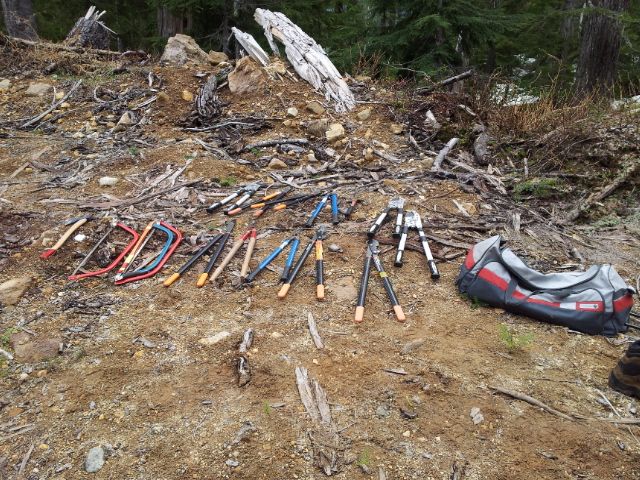 On Saturday morning, the researchers made the long, uneventful drive out of Vancouver and met in Pemberton, where gasoline was obtained for use in the vehicles. Another period of time passed before the parties had met once again near the bottom of the 4WD-only area of service road. 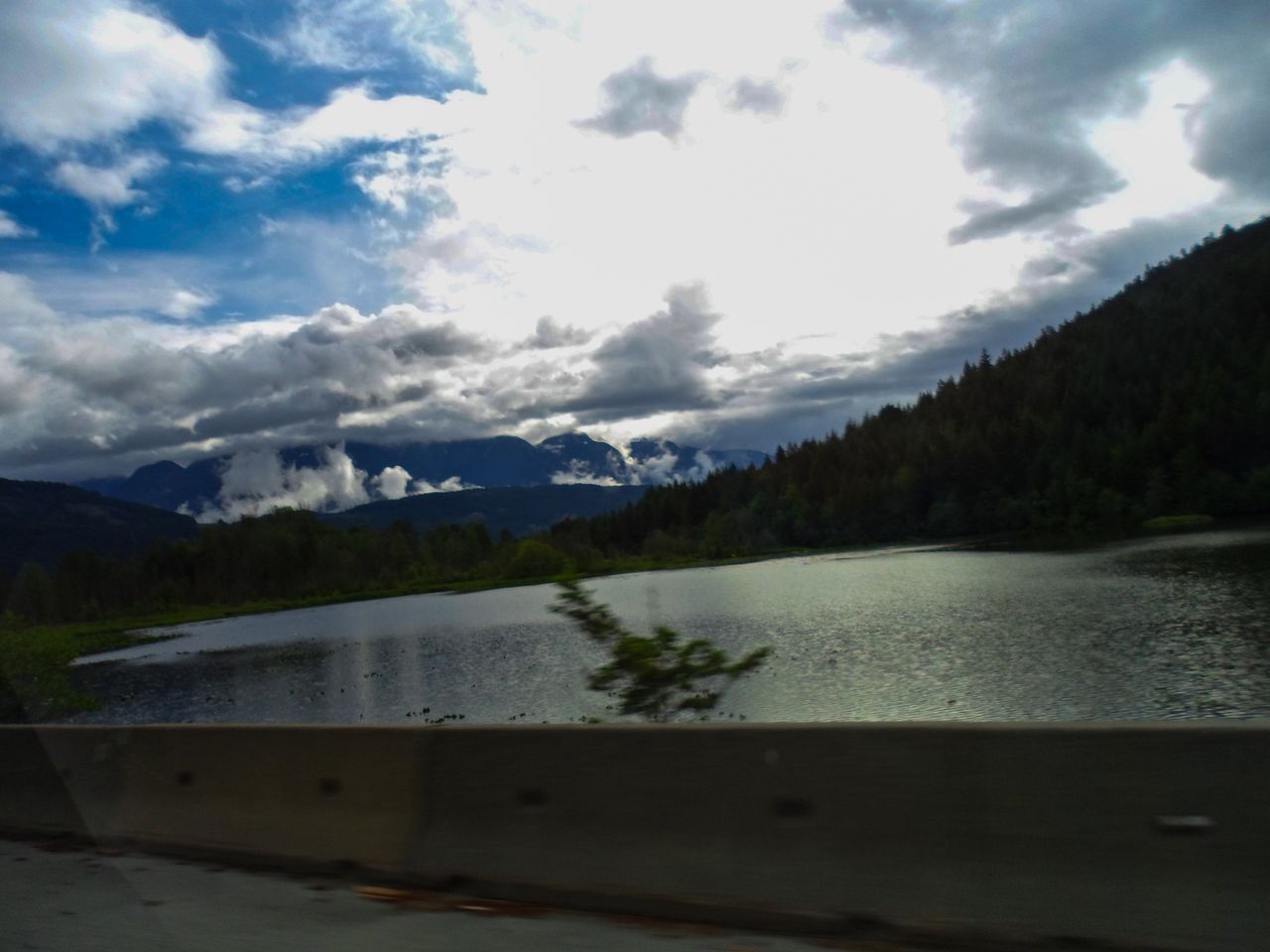 A view from the car. Image: Yuri Chenyakin

A short car shuttle ensued, resulting in the upper group reaching the trailhead fairly early and setting out with the goal of reaching the hut by dark. From the author’s perspective, this involved a tough slog through areas that included clear cuts where you were unsure if that was ground you were standing on or a set of suspended logs covered in a paper thin layer of wood chips. nevertheless the route was somewhat simple to follow and no route-finding through this area was required. After some distance the first lookout point was seen. 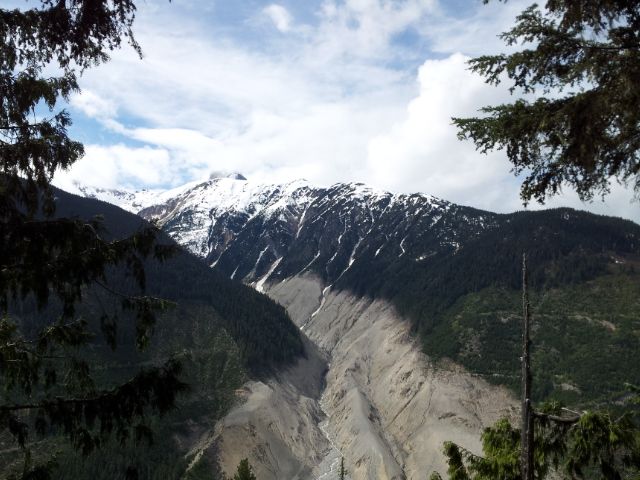 After some more hiking, an aged forest road was encountered. After continuing along this road, the upper group encountered Hot Springs Creek, which was crossed fairly easily. After this point, the group was essentially bushwhacking up a 45+ degree slope. To the author’s frustration, the godlike strength of Julien and Todd resulted in him having a great deal of trouble moving at any pace up the slope. After some amount of time (Approx. 3PM), it was decided that the author’s (hypothetical) habit of excessive smoking and drinking while on the trail would require caching all gear unneeded for an overnight stay so that the group could continue and try to reach the hut by nightfall. However, this proved to be unnecessary as within a half-hour the author was reaching exhaustion and the researchers chose to modify their experimental parameters and camp overnight at the pools rather than push on to the hut (Another 5 hours away). After a one-hour foray into the surrounding area by Julien and Todd, the upper group set back out to collect the cache of gear and reach the pools. After a long trek along a logging road, the upper group unceremoniously reached the pools at approx. 7 PM. At the hot pools, the group found fortune in the form of a bottle of vodka along with a 2L unopened cola, which were promptly consumed 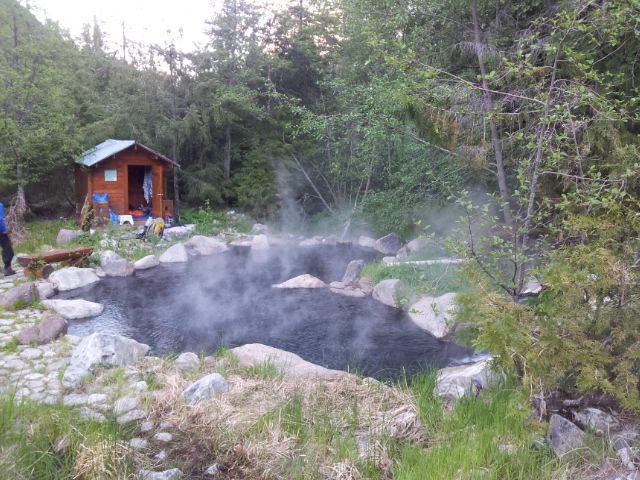 A view of the pools. Image: Boris Dalstein

Once at the pools, the rest of the team of researchers began to arrive. Wood was collected and a fire was built, and dinner was eaten. As night fell, the research team chose to go for a dip in the pools… For science, of course.

Day Two
Sunday was the primary day for data collection during this study. The groups had been slightly modified from the first day; the upper group was composed of only Todd and Julien, while the author was to join the group brushing in order to facilitate his abhorrent affinity for alcohol and cigarettes. During this day, many photos were taken of the surrounding scenery34. 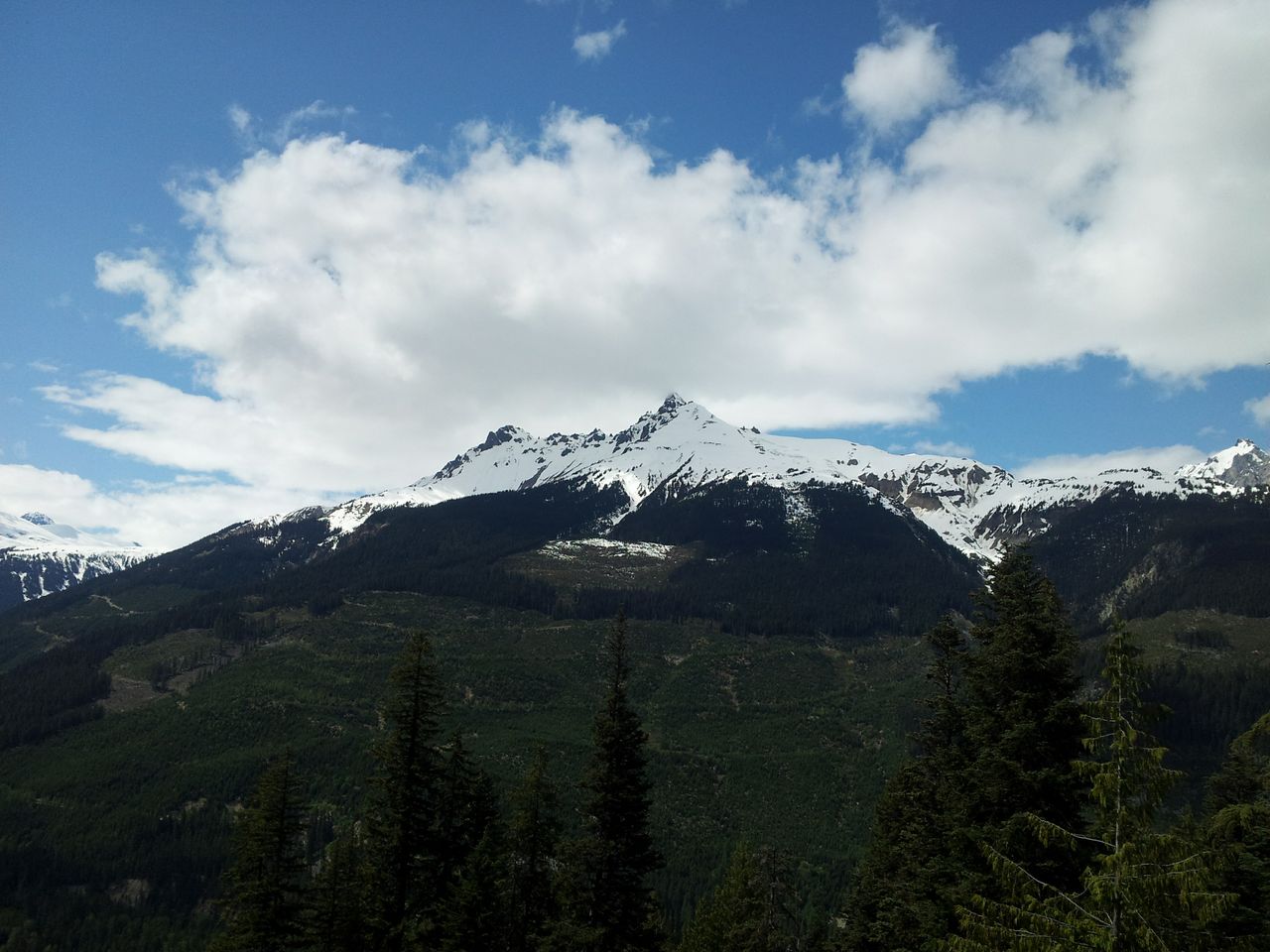 A view of Mount (something). Image: Boris Dalstein

After some walking along a logging road as well as taking a wrong turn and nearly getting lost, the brushing group was split between Gabe, Magda, Yuri, Ross, and Jim going to the section of the trail closer to the road, and Luka, Amir, and Boris brushing the logging road. The logging road brushing went without issue and a portion of the road was cleared of saplings and debris. 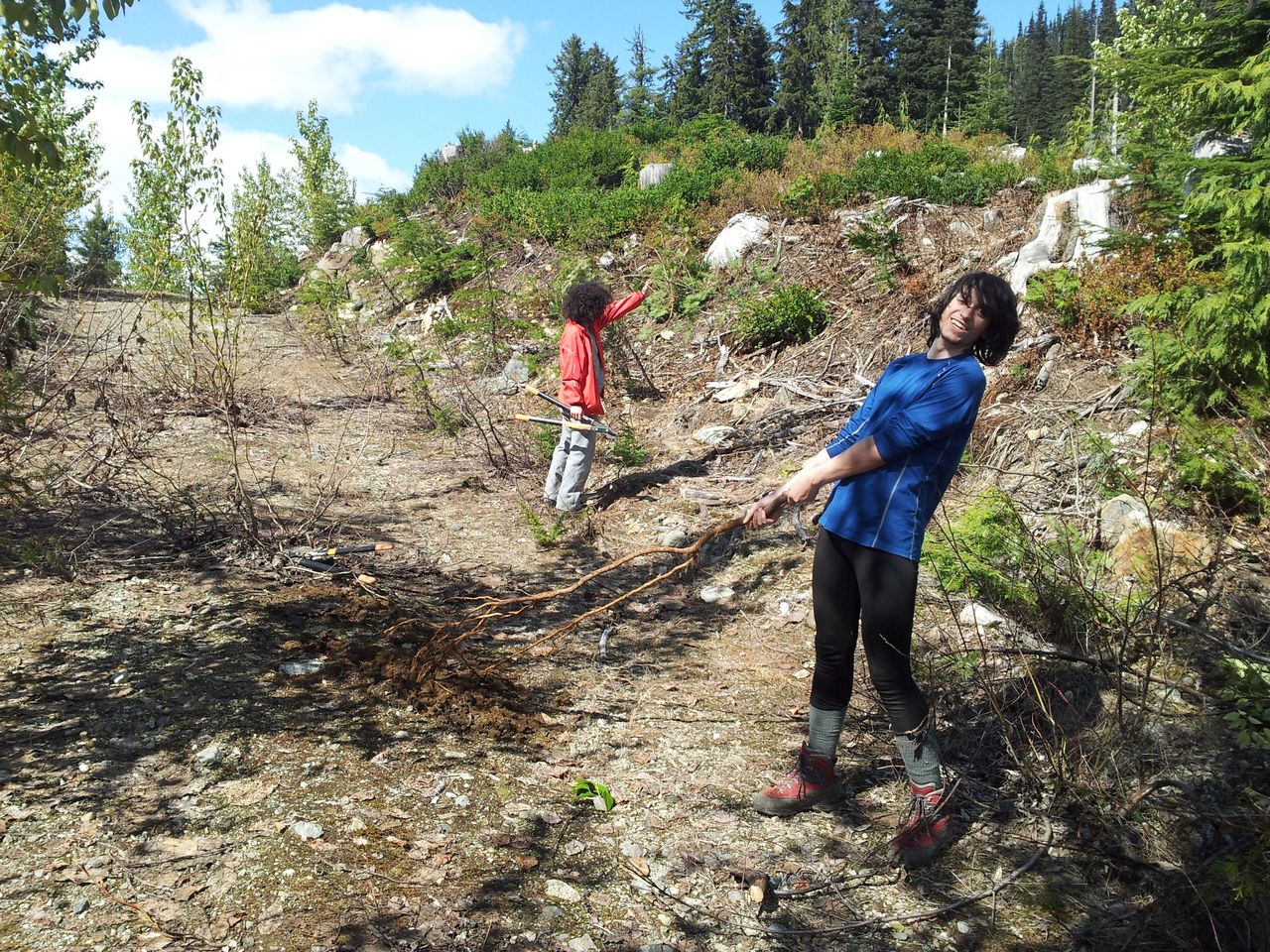 Clearing brush off the road.Image: Boris Dalstein
The other group had succeeded in marking the trail extremely effectively, and the other two groups had completed their tasks well. After a day of clearing brush, the author’s group chose to head back to camp. This evening went as per the previous one; substances were consumed to replenish calories, a fire was built, and the group took a soak in the pools before drifting off to sleep.

On the final day, Boris and Luka woke up early in an attempt to leave early and not be overtaken by the rest of the group so as to not delay the researchers’ return to Vancouver. The researchers packed up, ate breakfast, and set out for the trail. After a  slog along the logging road before the trail proper, the small advance group which had been joined by Amir set out along the trail. The three quickly discovered how extensively and awesomely the trail had been marked by the rest of the group, and following the route turned out to be trivial. Approximately 2/3 through the second clear-cut (second from the hot springs) the main group caught up with the advance party and the two groups moved together for the rest of the hike out. Along the way, the group stopped to admire the sign posted up by the lookout point 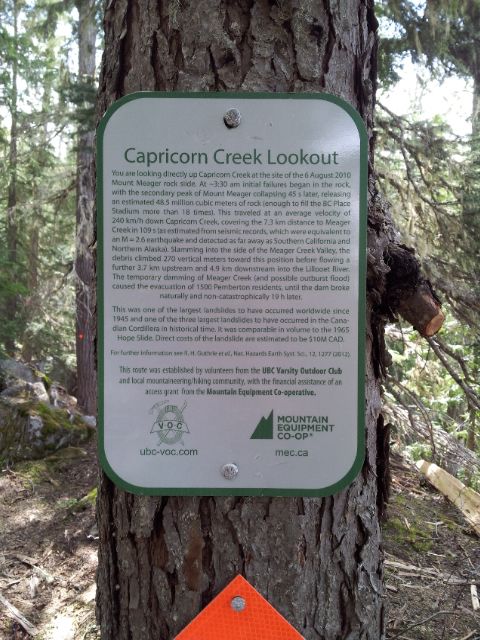 After that point, there was a fairly short stroll to reach the Veenstramobile. At this point some of the group dropped their packs and began to walk down the logging road in order to save time. This was also relatively uneventful aside from some interesting distance estimation. Christian began ferrying gear and people down the trail, and by the time Luka, Ross, Magda and Julien were near the bottom, Veenstra stopped to cram the rest of the researchers into his vehicle. The unfortunate Veenstramobile then proceeded to carry ten people down a stretch of the road, with only minor suffocation and trauma being inflicted upon the passengers.

[Insert video of everyone getting out after the video is received]

After this point, cars were loaded and the researchers, having completed gratuitous amounts of science, set out for civilization. Along the way, it was decided that the group stop in Squamish for dinner, resulting in the author being kicked out of a bar for not having any false identification. The group settled on an indian restaurant, where large amounts of naan faff occurred alongside the consumption of copious amounts of curry. At this point, potential disaster struck in the form of the highway being potentially closed. Fortunately, this was not true and the groups managed to drive home uneventfully.

The author would like to comment on the trip’s overall success of the trip despite severe difficulties experienced on Day One of the study. The study showed that large amounts of trail were improved significantly, however more studies are required in order to fully develop the route to the Harrison Hut. In total, the trail is marked for the entire distance from start to the logging road, and almost all of the trail to the Harrison Hut has been flagged. A portion of the trail was cleared of brush in order to facilitate easier hiking access, although significant obstacles in the form of large deadfall still remain and will need to be cleared in the future. The author would conclude that a significant amount of study is necessary to properly restore access to Harrison Hut.