Jeff Taylor is dirtbagging/ climbing all summer, AKA: living the dream.

About 2 weeks ago, he messaged me on Facebook to determine my availability for climbing shenanigans. I had 6 Vancouver friends over to my house in Vernon for the July long weekend, but I told him that I was free to have him over any time after that. Jeff showed up at my house the evening of July 2.

We were initially thinking of cragging around Vernon, but the allure of alpine climbing got us hooked within 1 hour of Jeff’s arrival. 2 hrs after Jeff showed up in Vernon, we had jumped in the lake, picked some cherries, packed our bags and set off for Slocan to climb the south buttress of Mt. Gimli. The fact that it was the hottest day of the summer, with a forecasted high of 37C definitely helped expedite our decision not to go cragging on the evening of the 2nd.

Along the highway towards Slocan, Jeff’s car started acting funny. His acceleration was drastically diminished when he attempted to pass on the single laned highway. We also smelled gas. His engine was overheating, so we quickly pulled over to the side of the road to diagnose the problem.

It turned out that he was low on coolant. I poured 3.5 litres of water into his coolant tank, and we set off again. It seemed as though his car was in a “safety mode” and only firing half of its cylinders to prevent the engine from overheating. This “safety mode” was slow to disengage, and we only noticed his car performing properly after the short ferry ride to Nakusp.

We negotiated a long FSR from Slocan to Gimli, which was mostly “non-aggressive 2WD.” Jeff championed the steep “aggressive 2WD” crux on his 4th attempt, and we made it to the trail head at 11:30 pm. Although we were initially planning on doing the approach that night, then doing an alpine start to beat the heat, the prospect of 2 hrs of sleep did not appeal to me. It didn’t take much convincing to persuade Jeff to camp at the trail head and then start hiking the next morning whenever we woke up.

At the trail head, we noticed that the 3 other parked vehicles had wire mesh around their cars, presumably to protect their tires from porcupines. We flanked the vehicle with our sleeping bags to protect our rubber from these nocturnal chompers. 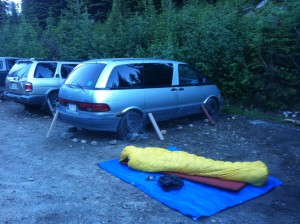 The next morning, we awoke to the sun, pesky mosquitoes and a glorious sight of the gneiss monolith that is Mt. Gimli. We scampered up the approach trail with our light day pack, reaching the base of the climb at approximately 9:00. Unfortunately for us, there was one party ahead of us when we reached the climb, that was just setting off. We watched them sew up the first 5’9 pitch, and tried to give them a bit of a head start before setting off. While waiting at the bottom of the climb, we socialized with very tame mountain goats. According to the belayer, Mike, these goats are particularly fond of licking up the salts in your pee. 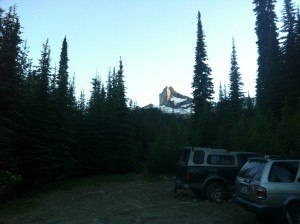 I won the rock paper scissors with Jeff, and got to lead the first pitch, which is the most difficult overall, although a later roof pitch has a single crux 10a move. Despite trying to give Jake and Mike an ample head start, I caught up to Mike quite quickly. He was suffering with the burden of 2 massive pairs of hiking boots in his pack as well as technical ice axes. Jeff and I just brought runners for the descent. A few pitches up, our fears of being too hot vanished. At a belay station in a notch, the winds actually made us cold. One of our mountain goat companions and her calf scrambled up beside the buttress to observe our ascent. 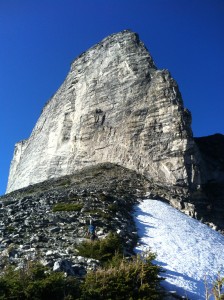 Eventually, Mike and Jake let us pass them, and we breezed up the rest of the climb. We ended up doing 7 pitches rather than select climbs of western Canada’s 8. This had Jeff leading up the roof 10a move… I may have weighted the rope slightly for this move, but I blame the weight of the backpack, and a tight belay pulling me sideways. Along the way up, numerous “Gneiss” puns were made (the type of rock we were climbing, pronounced: nice). 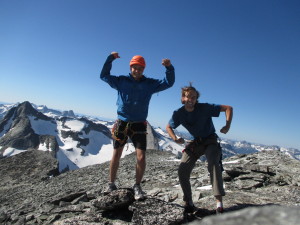 We reached the summit at around 15:30. and proceeded to scramble down the west ridge. The snow was soft, and we made it back to base-camp (called “the beach”) quickly by boot-skiing large portions of the descent.

A mountain goat supervised my use of the green outhouse, and we left for the car at around 19:00. From the calls we heard at the top of Gimli, it sounded as though Mike and Jake were just finishing the technical climbing at this point. On the way down, we passed a couple from Calgary who were camped at the beach. They informed us that their houses were still terrestrial. 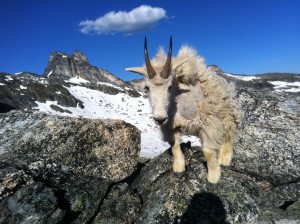 The couple had camped a couple days in the Valhallas and had already climbed up Asgard and one route up Niselheim. They planned to do one more route up Niselheim as well as the south buttress of Gimli before heading back to the flood plains. They mentioned that they found the other routes in the area from Steph Abegg’s blog: http://www.stephabegg.com/home/tripreports/britishcolumbia/gimli.

After a rapid descent, Jeff and I once again strategically set up our sleeping bags to fend off porcupines, and tentatively planned to drive through Revelstoke and do some cragging before heading back to Vernon.