We began our trip up to Wedgemount Lake on the later side Saturday morning. Around 8:00 I was picked up, ready to be off on my first outing with the VOC. The Moto car, driven by Spencer and filled with Klara, Pascale and myself, made good time to Squamish where we stopped to caffeine and pastry up. Here we met with the other cars on our trip before departing once again. We arrived in the trail parking lot at around 10:45 and we began our hike around 11:00.

It was an enjoyable, if tiring, hike to the lake. On the way I stopped very few times due to the swarms of bugs that made resting difficult. By 14:15, Klara, Matei, Elaine and I were relaxing on the tent platforms looking out at the beautiful lake, Wedge glacier and towering peaks. It was nearly an hour before the rest of our troop made it up. The majority of the crew chose to camp close to the lake, near a creek; Matei and Elaine opted to stay at the tent platform we had claimed upon arrival.

After some settling in, Klara, Matei, Elaine and I started on a trip up Mt. Cook, the easiest of the surrounding peaks. It was a fun climb up through a combination of alpine brush and scree, surrounded by increasingly incredible panoramic views. At a scree platform below the final ascent up to Cook’s peak, Klara, Matei and I decided not to bother with the scramble up and instead enjoyed the views east from a cliff. Elaine, on the other hand, was determined to make it up Cook. We rendezvoused with her about 30 minutes later and headed down to camp, the trip taking just about four hours. After dinner we watched the nearly-full moon rise over the glacier, and it was time for sleep.

Sunday morning we woke early to do some adventuring. Pascele and Anne readied to bag both Parkhust and Rethel Peaks. Having abandoned a plan to summit Wedge Mountain with Omid, Spencer and Fisal joined Marie-Eve, Sofiya and I on a mission up Mount Weart. The rest of our partners opted to stay and have a beach day by the lake. Some quick preparation allowed us to head out around 6:00. From the start, the majority of rout up was over loose scree. After a scree slope and creek crossing we encountered our first snowy slopes where I was taught self-arrest. Once done with the lesson, we continued up. My inexperience made for slow going. At a second snow bowl, we made our way around to the opposite side and clambered up to the ridge leading to Weart. During this time we noticed Matei and Klara following us in hot pursuit up the slopes. We made it to the ridge only slightly before them. It was around 9:50, 10 minutes before our turn-around time. We decided to enjoy the views, snap a few photos and take a swig of Marie-Eve’s Fireball before abandoning the summit and heading back. Our tip down was much quicker, with the softened snow allowing for easier travel. Going down, I was glad I had been taught self-arrest. On our way by the Wedge Glacier, we took some time to check out the ice cave at its base before making it back to camp right on time.

We began our descent from the lake around 14:30, and arrived at the bottom between 17:30 and 18:00. Sunburned and exhausted, I wished we didn’t have to go home; I’ll definitely be doing more trips with the VOC! On the drive back, we all stopped at Splitz in Whistler Village for a bite to eat and a final goodbye. 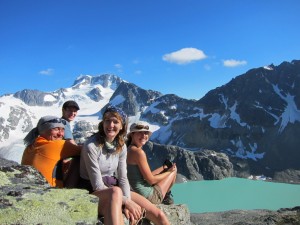 Matei, Klara, Elaine and I on the slopes of Cook. Photo: Klara Steklova.

View from the Cook platform.

View from the slopes of Mt. Cook. 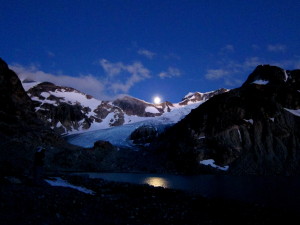 View from the ridge to Weart, looking towards Wedge. 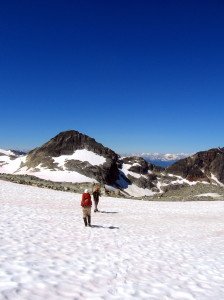 Marie-Eve and Fisal descending from Weart. 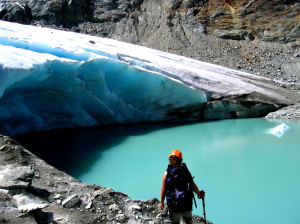 Sofiya in front of the ice cave at the base of Wedge glacier.